Layer type alkali transition metal oxides AxMO2 (x=1.0) have various structures characterized by the site available for the alkali metal A between MO2 sheets,1,2 among which two structure types O3 and P2 are illustrated in Fig. 1. AxMO2 exhibits distinct features such as high structural tolerance toward x and mixed transport property consisting of electronic conduction within MO2 sheets and ionic one by A ions at the inter-sheet space3-4. When electronic conduction is suppressed, AxMO2 exhibits purely ionic conduction as previously reported on NaxMx/2Ti1-x/2O2 (M=Ni, Co; 0.60=x=1.0), which were found to be fast-ionic conductors with conductivity of ~10-2 Scm-1 at 770K.5-6

It has been believed that the threshold geometry of A ion is the crucial factor determining the ionic transport in AxMO2. Actually, a large enhancement of conductivity of 102-103 times was observed, when the threshold shape changes from triangle (type O) to rectangle (type P) in potassium compounds.2 However, the advantage of the rectangular threshold over the triangular one has not been properly estimated, since the other factors such as the composition and the iono-covalency of competitive bond A-O-M are inevitably involved at the structure change. So the proper estimation of the structural feature on conductivity depends on the existence of two allotropes of P and O, for a given composition. 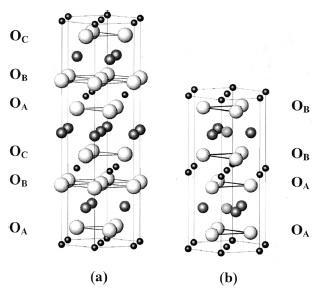 Some oxides with large unit-cell volume such as RbScO2 and CsLnO2 (Ln=lanthanoids) exhibit a structure change from O3 into P2 as temperature increases.7-8 Such a change is deeply related to the increase of the configurational entropy at the structure change O3→P2, arising from doubled number of sites available for A ions in P2 (Fig. 1). Consequently, the free energy change at the transition O3→P2 possibly becomes negative at sufficiently high temperatures, where the lattice energy difference of the two structural variants can be compensated. Recent calculation of electrostatic lattice energy suggested that non-stoichiometric Na-phases may also exhibit the same kind of structural transition despite the smaller unit-cell volume.5 This idea has led us to investigate various systems, of which we report here on the structural evolution of Na0.67[Co0.33-yMgyTi0.67]O2 (0⪯y⪯0.28) as a function of composition and temperature, and on their ionic conduction properties.

Oxides Na0.67[Co0.33-yMgyTi0.67]O2 (0⪯y⪯0.28) were prepared by thermal solid state reactions from the appropriate mixtures of Na2CO3, CoO, MgO and TiO2 according to the reaction:

An excess of sodium carbonate (10-15 mol%) was added to compensate for volatile sodium component. The starting materials were mixed and calcined at 1073 K for 12 hrs and finally at 1123 K under Ar atmosphere. Products were leached into MeOH to remove the sodium components. Completion of the synthesis was confirmed by X-ray powder diffraction (XRD) using a Siemens D5005 diffractometer. TA Instrument SDT 2960 was employed for an isothermal gravimetric analysis. In order for the ionic conductivity measurements, samples were sintered in disk-type pellet (d=7 mm, t=2 mm) at 1123K for 6hrs and Au blocking-electrodes were deposited on both sides of pellet by DC-sputtering. Impedance data were collected at every 30K at the range of 300-700 K under Ar-flow using YHP 4192A LF impedance analyzer at the range of 5 Hz-10MHz.

Powder XRD patterns of the Na0.67Co0.33-yMgyTi0.67O2 (0⪯y⪯0.28) at 1123K are shown in Fig. 2 and their lattice parameters are listed in Table 1. No additional peak suggesting any ordered structure was observed. Interestingly, the lattice parameter a increases with Mg-content despite the small size of Mg2+(r=0.72A) over Co2+(HS; 0.745A)9. It strongly implies that the overall covalency in MO2 sheet is diminished, because of the small electronegativity of Mg2+(1.22) with respect to that of Co2+(1.57).10-11 As a result, the covalency of Na-O should be enhanced in the competitive bond Na-O-M. It is apparent that the evolution of bond character in Na-O-M also affect the value c/a, which actually decreases with Mg-content indicating the lattice expansion is rather two-dimensional. The structure change from P2 to O3 was observed near y=0.15. The drastic change of a implies that the bond character in Na-O-M is greatly influenced by structure change (or vice versa): Comparing with O3, P2 induces highly enhanced covalency in M-O and thus gives rise to stronger interaction within MO2 sheet than across the sheets. It means that the bond Na-O is essentially ionic in P2, whereas it takes some covalency in O3. 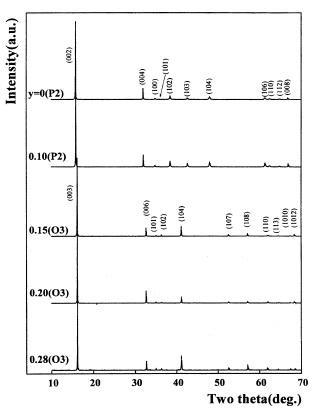 With Na0.67Co0.33-yMgyTi0.67O2, β was calculated within 0.32-0.36 (Table 1) and the transition occurs around β=0.34. It supports the previous argument that type P can be maintained up to higher β when the M-site ions are coupled as Mi2+/Mii4+ instead of Mi3+/Mii4+, because the former induces greater electrostatic interaction than the latter.5

In order to induce the structure change with temperature, O3 phases (y=0.15) were heated at elevated temperatures. Compositions y=0.20 and 0.28 showed no transition below 1273K but melted incongruently at higher temperatures. However, y=0.15 has shown a complete structure change into P2 after heating at 1243K for 5 days as shown in Fig. 3: At 1123 K, y=0.15 exhibits the initial O3 phase (a), but an additional P2 phase appears at elevated temperature (b) and grows with temperature. It stayed in mixed phase until the temperature reaches to 1243K, where P2 was finally obtained as a single phase (d). Below 1243K, only mixtures of two phases were obtained, even after a prolonged heat treatment (max. 2 weeks). This structure change was irreversible, as revealed in XRD result after re-heating at 1123K (Fig. 3(e)). An isothermal gravimetric analysis performed for about 110 hrs at 1243 K under Ar atmosphere revealed that the sample gradually lost weight of c.a. 1.2 wt% during the structure change. Since the obtained P2 phase did not contain any detectable impurities, the weight loss may be attributed to the volatilization of Na-component as Na2O: 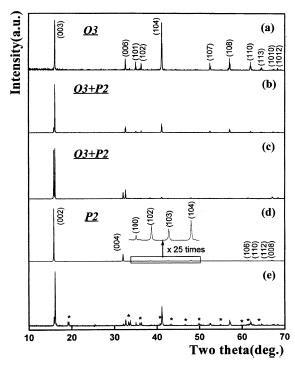 Due to the stacking feature of MO2 sheets along axis c, the transformation O3↔P2 cannot be achieved by simple cooperative movements of MO2 sheets like sliding or rotation,13 but occurs through an overall rearrangement at high temperature. The modified composition Na0.63Co0.18Mg0.15Ti0.67O1.98 corresponds to β=0.32, well within the domain of P. Therefore the structure change O3→P2 observed in this work includes a small change of composition inducing higher β, in addition to the configurational entropy effect as mentioned above. Nevertheless, as-prepared two variants of y=0.15 are still useful to examine the influence of structure on ionic conductivity, in that the small decrease of Na-content δ≈0.04 in type P does not affect significantly on the conductivity.6 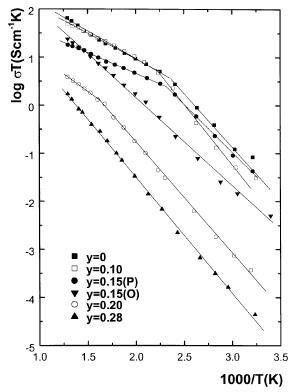 AC-conductivity results are plotted as log(σT) vs. T-1 in Fig. 4 and the conductivity at 300 and 770K and activation energy are summarized in Table 2. Activation energies were calculated from Arrhenius equation σ=(σ0/T) · exp(-Ea/kBT), where σ0, Ea, kB represent pre-exponential factor, activation energy and Boltzmann constant, respectively. Substitution of Co2+ by Mg2+ apparently made the material less conductive despite the enlarged threshold window. It can be primarily attributed to the increased covalency of Na-O, which sets up increased activation energy Na ion to move into other site.

The structural effect on conductivity was estimated from the difference between two variants of y=0.15. The ratio σ(P2)/σ(O3) is determined smaller than 10 and even becomes less than 1 at high temperatures (>670 K), being much smaller than 102-103 as previously reported.2 On the contrary, the variation of bond character of Na-O-M has shown to be capable of changing conductivity more than 102 times. This result indicates that the bond character can play even more an important role than structural feature for the ionic conductivity of AxMO2.

The activation energy change observed with P2 phases around 430-450K was considered associated with the thermal relaxation of local distortion in lattice and discussed in detail in the previous work6: The large differences in dimension of Co2+, Mg2+, Ti4+ should randomly introduce the local distortions into matrix, leading to a wide distribution of the size and shape of the trigonal prisms for Na+ ions. When the temperature increases, Na+ ions at highly distorted sites are considered to gain some degree of mobility by thermal relaxation of the distortion, giving rise to a gradual increase of their contribution to conduction process. In other words, the effective carrier concentration increases through thermal activation at relatively low temperatures. At more elevated temperatures where such a thermal relaxation of matrix distortion is saturated, the effective carrier concentration cannot be activated any more, leading to the decrease of activation energy as observed above 450 K.

In summary, Na0.67Co1-yMgyTi0.67O2 (0⪯y⪯0.28) changes its structure P2 to O3 around y=0.15 at 1123 K, and an irreversible structure change from O3 to P2 was observed for y=0.15 by increasing the temperature up to 1243 K with a small weight-loss of the volatilization of Na2O. The ionic conductivity results indicate that the bond character of Na-O-M can change conductivity more greatly (c.a.102 times) than the structure does (<10). The activation energy change of type P2 around 430-450K was considered as related with the thermal relaxation of local distortions by the different size of M-site ions Co+2/Mg+2/Ti+4.