We investigated the order of local movement of functional groups (-C(=O)O) in a liquid crystalline (LC) oligomer (12-4) using 2D Raman correlation spectroscopy. The results suggest that the free carbonyl near the ethyl terminal group moved first, followed by the hydrogen-bonded group. The free carbonyl group between the biphenyl groups rarely moved. Interestingly, 2D sample-to-sample correlation spectroscopy (2D STSCS) revealed that some of the carbonyl modes started to move at far below (50) the LC temperature (135), countering conventional beliefs.

Liquid crystalline polymers (LCPs) containing an ester functional group in a mesogenic unit have long been the subject of studies of intermolecular interactions. Many theoretical and experimental works have examined the planarity of the benzene rings and adjacent carbonyl groups, and the site of bond rotation near the phase transition (solid-to-liquid crystal) temperature.1-3 We recently characterized an LC oligomer with a biphenyl ester moiety using Raman spectroscopy to better understand the mechanism of the conformational change that accompanies modification of the intermolecular interactions.4,5

In order to understand the mechanism of the conformational changes during the phase transition, we compared the spectral evolution of the combination mode of the aromatic C-C(=O)O and C(=O)O stretching vibrations at 1274 cm−1 with those of analogous molecules as a function of temperature, and found that bond rotation occurs around the aromatic C and the C(=O)O near the ethyl terminal. This bond rotation is thought to be facilitated mainly by cleavage of the hydrogen bond between the carbonyl oxygen near the ethyl terminal and one of the hydrogen atoms in the poly(ethylene oxide) (PEO) chain. Analysis of the C=O stretching mode allowed us to locate the carbonyl group that participated in the hydrogen bonding. Although the mechanism of the conformational changes was revealed, the local dynamics has not been analyzed fully.

Two-dimensional (2D) correlation spectroscopy is a very useful technique for analyzing the dynamics of molecules under various perturbations, such as temperature, time, and concentration.6-9 In brief, there are two components in 2D spectroscopy, one of which is called synchronous v (designated Φ (v1, v2)) and the other asynchronous (designated Ψ [v1, v2]). The synchronous spectrum represents simultaneous or coincidental changes at variables v1 and v2, while the asynchronous spectrum provides information about the order or priority of the modes of the variables. This technique simplifies complex spectra with many overlapping peaks and enhances the spectral resolution by spreading the peaks over a second dimension, identifying various inter- and intramolecular interactions from the selective correlation peaks.

The details of the synthesis and characterization of 12-4 were reported previously.4 The crystallineto-LC phase transition temperature (heating at a rate of 10 ℃ min-1) was observed at 135.2 ℃, using a Perkin Elmer DSC-7 differential scanning calorimeter (DSC) equipped with a 1020 thermal analysis controller.

The Raman spectra were obtained using a Renishaw Raman microsystem 2000 with excitation at the 632.8-nm line of a HeNe laser. The laser power at the sample was ca. 5 mW and the resolution of the spectra was ±2 cm−1. After the samples were put on glass slides, data were acquired using a Linkam heating and freezing stage (THMSE 600) with a controller (TMS 92), and then calibrated to the silicon band at 521 cm−1.

Information on the dynamics of carbonyl groups is critical for understanding the conformational changes in a LC oligomer at the crystal-to-LC temperature. In order to understand this, various LC polymers have been studied.4,5,10 In 12-4, one of the carbonyl modes forms hydrogen bonds with a hydrogen in the poly(ethylene oxide) group in the neighboring molecule.4,5 When hydrogen bonding occurs, a new band appears at 1725 cm−1 giving three bands (1717, 1725, 1734 cm−1). As the temperature increases, the hydrogen bond breaks up gradually, giving two bands. The changes in the intermolecular interaction with increasing temperature were deduced by monitoring three complementary Raman modes, i.e., the C=O, C=C, and aromatic C-H vibrational modes. However, we could not obtain information on local movement of a specific functional group using one-dimensional (1D) Raman spectroscopy. Therefore, it was necessary to explore the dynamics using 2D correlation spectroscopy. 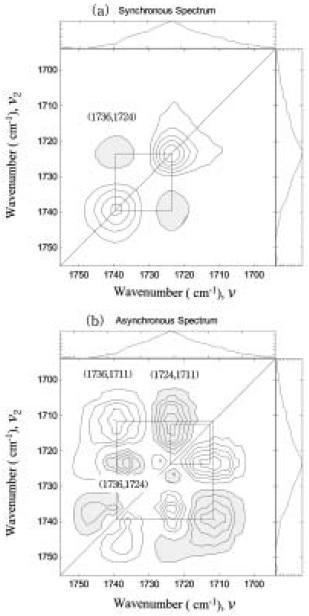 Fig. 2.The 2D Raman correlation spectra in the carbonyl region, (a) synchronous and (b) asynchronous spectrum.

Peaks with positive and negative signs are represented by white and shaded contours, respectively. Referring to the 2D correlation rules, a positive sign indicates that the intensities of the corresponding bands in the one-dimensional spectra are either increasing or decreasing together, while a negative sign indicates that one is increasing and the other is decreasing. Negative cross peaks appearing at (1736, 1724) are seen in the synchronous spectrum in Fig. 2(a) and suggest that the two modes behave in opposite directions, as already observed in 1D Raman spectra. The cross peaks at (1736, 1711) and (1724, 1711) in the asynchronous spectrum are not seen in the synchronous spectrum. Referring to the 1D Raman spectra, the mode at 1724 cm−1 decreased with increasing temperature, while the intensity of the mode at 1711 cm−1 remained constant. This indicates that the intensity at 1711 cm−1 increased relatively. Likewise, the relative intensity at 1736 cm−1 increased, while the mode at 1711 cm−1 decreased.

Mesogenic conformational changes are mostly responsible for the differences between the adjacent crystalline polymorphs in liquid crystalline molecules.11,12 Therefore, mesogenic Raman bands reflecting mesogenic conformational changes with environmental changes, such as temperature changes, are of particular interest. Since the LC temperature of 12-4 is ca. 135 ℃, the movement of the carbonyl modes should reflect this temperature. Therefore, we monitored the movement of the carbonyl modes with increasing temperature, because they belong to the mesogenic part, which determines the LC temperature, using 2D sample-to-sample correlation spectroscopy (2D STSCS), which is explained elsewhere.13

Two-dimensional STSCS is a powerful technique for monitoring slight changes in the intensity of a certain mode and we applied it to our system. For comparison, we plotted 2D STSCS for the entire spectral region (360~3150 cm-1) as well as for the carbonyl region (1697~1755 cm-1) by obtaining spectra at temperatures from 20 to 180 ℃ at increments of 10 ℃. As Fig. 3 shows, an apparent change in the spectral pattern of the entire region occurred at around 130 ℃, which is in relatively good agreement with the LC temperature. However, the spectral change in the carbonyl region was quite different, indicating that the local movement of the carbonyl mode does not occur at the LC temperature. A marked change was observed at 50 ℃, indicating that some of the carbonyl groups start to move at far below the LC temperature of 130 ℃. Generally, the PEO chain moves freely at lower temperatures than the mesogenic moieties do because of its flexible character. Therefore, the PEO chain mainly reflects the Tg temperature. Our result is quite different from this conventional concept. The carbonyl group in the mesogenic unit moved along with the PEO coil in a concerted way. 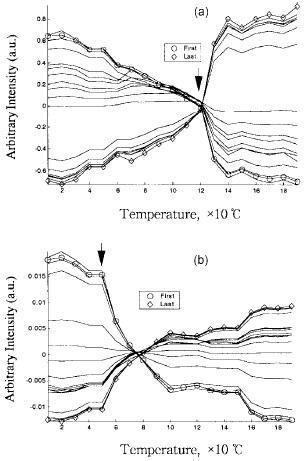 We used 2D Raman correlation spectroscopy to study the dynamics of 12-4 during the LC process. The analysis of complementary synchronous and asynchronous spectra showed that the free carbonyl group near the ethyl terminal moved first, followed by the hydrogen-bonded one. The free carbonyl group between the biphenyl groups rarely moved. The results obtained from 2D STSCS also revealed the interesting fact that some of the carbonyl modes started to move at far below (50 ℃) the LC temperature (135 ℃), countering accepted belief.