Condensation of the phosphorus ylides with carbonyl compounds discovered in 19531 and now named as the Wittig reaction has become one of the most important and useful methods in preparing alkenes with usually high level of geometric control.2 The range of products derived from the reaction of the ylides is enormous: from simple alkyland aryl-substituted ethylene derivatives to α,β-unsaturated carbonyl compounds and carboxylic esters as well as vinyl halides and vinyl esters. The potential of this reaction for the industrial process was soon recognized3 and the commercial synthesis of medicinally important natural products such as vitamin A acetate by the BASF group (Scheme 1) and β-carotenes is the well-known example.

Scheme 1.BASF process for the synthesis of vitamin A acetate in 600 ton per year.

Experimentally a phosphorus ylide prepared in a solution state from the corresponding phosphonium salt by the treatment with a suitable base is condensed with a carbonyl compound to produce a double bond, eliminating triphenylphosphine oxide. Recent two efforts of changing this conventional concept are quite interesting in the use of the phosphorus ylides: a catalytic process4 and a solvent-free condition.5 The latter involves the employment of phosphorus ylides in a solid state generated by mechanical milling of phosphonium salts with an excess of potassium carbonate, and the ylides are effective for the Wittig-type olefination with carbonyl compounds in a high yield. This process can be particularly useful for the chemical industry that faces an enforcing global control over the use and disposal of hazardous organic solvents. In addition, the reactive chemicals under a non-conventional state like the phosphorus ylide in a solid state would be very valuable for searching novel chemical phenomena having various advantages which may not be achieved by conventional means. In this respect, chemical systems in a supercritical fluid (SCF) have received significant scientific interests. SCF is considered useful for the replacement of conventional organic solvents. Examples include various organic transformations such as hydrogenation, photochemical and radical reactions, Diels-Alder cycloaddition reactions, oxidations, enzymatic transformations, and polymerization reactions.7 Tuning the properties of SCFs by changing the pressure and temperature controls several aspects of the reactions8 such as (1) density or cosolvent tuning of reactions for rate, yield and selectivity, (2) improved mass transfer, (3) modifying the local solvating power via solute-solvent clustering8 and microemulsification.9

Our approach to this issue is to investigate reactions usually run in conventional solvents to assess a behavior in SCFs. The condensation reaction of some (benzylene)triphenylphosphoranes with carbonyl compounds in supercritical carbon dioxide (Tc = 31℃, Pc = 1,074 psi) was examined. Phosphonium salts are not soluble in carbon dioxide and we needed to dissolve them in a small amount of solvent (THF). Thus, the reactions were actually performed in scCO2 containing a small amount of cosolvent (THF). Where reagents like many organic compounds have a solubility problem in scCO2,10 the practice of adding a small amount of polar solvent (entrainer) to SCF is established and tuning of the reaction pathways by the addition of an entrainer is another subject of recent studies.11 In our experiment, the corresponding (benzyl)triphenylphosphonium bromides (1) (ca. 1 mmol) were dissolved in a small amount of THF (1.5 mL) and treated with 1.5 eq. of sodium methoxide (ca. 100 μL, 15 M in methanol) to generate (benzylene)triphenylphosphoranes (2). Phosphoranes were introduced into a tubular stainless steel reactor (24 mL capacity), carbonyl compounds (ca. 0.9 mmol) were added shortly. Then, the reactor was charged immediately with carbon dioxide by pressurizing. The reaction pressure of scCO2 was monitored by a high precision gauge (Sensotec, TJE model) that is connected with the reactor during the reaction. The reaction mixture was heated at 80 ℃ with magnetic stirring for 2 h while the pressure was at 2,000 psi. The reactor was cooled, and CO2 was vented. The residue was dissolved in dichloromethane, concentrated under reduced pressure, and the crude products were submitted to 1H NMR spectroscopy for determining the isomeric ratios. A further purification of the products was made by column chromatography on silica gel. In the reactions without SCF, phosphoranes generated as before were reacted with carbonyl compounds in a total volume (10 mL) of organic solvents. The reaction of 2 with aromatic aldehydes (3) was tested first (Scheme 2). 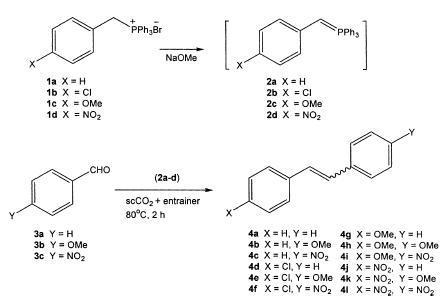 Scheme 2.The reactions of (benzylene)phosphoranes (2) with aromatic aldehydes (3) in scCO2 and entrainer.

The condensation of most ylides with benzaldehydes in scCO2 and entrainer undergoes in high conversion after 2 h (Table 1). The reaction of 2 with benzaldehydes in scCO2 proceeds more slowly and needs usually a longer reaction period (2 h) to reach a conversion comparable to that without scCO2 where it is operated for 1 h. Due to their polar character, the reactions of 2 with 3 expect to favor more polar solvent (THF). These results also indicate that modification of the chemical reactivity of 2 caused by the presence of scCO2 brought a substantial change in E:Z-isomer ratios. The isomer ratio of 4 determined by 1H NMR spectroscopy is found to depend on the reaction medium. Generally, phosphoranes that are not substituted with a nitro group (4a-b, 4d-e, and 4g-h) show more (Z)-selective reactions with aromatic aldehydes under scCO2 condition than in THF. However, in systems having strong electron withdrawing nitro groups (i.e., 4c, 4f, 4i-l), the tendency of (Z)-preference was thermodynamically offsetted by a large (E)-predominance. The empirical generalization regarding isomeric preferences such as (Z)-isomers formation from non-stabilized ylides under salt-free conditions and (E)-isomers from stabilized ylides has been well established.2d However, prediction of stereochemistry for semi-stabilized phophoranes like 2 is less decisive and the ratio of isomeric products may depend on the effect of experimental condtions.2 Reactions of (benzylene)phosphoranes 2 in an nonpolar environment as in scCO2 would proceed through earlier transition state than in THF and would be more selective for (Z)-olefins. The configurational assignment of two isomeric products 4 can be made by comparing the 1H NMR chemical shifts of two distinct olefinic protons. Vinylic protons of (E)-isomers resonate at a lower field than those of (Z)-isomers; for example, (E)-4a with δ = 6.99 ppm and (Z)-4a with δ = 6.49 ppm.12 The reaction between the least reactive pairs where a nitro group is substituted at the phenyl rings of both the ylide (2d) and benzaldehyde (3c) was very sluggish. To examine the dependency of the Wittig reaction in scCO2 on temperature and pressure, we ran the reaction of 2a with 3a under various temperatures and pressures. While no significant changes were observed in E:Z ratios in the reaction of 2a with 3a in scCO2 containing the THF entrainer (E:Z = 1:1.6 for 4a) under various temperatures (40, 60, 80 ℃) and pressures (1,500 psi to 5,500 psi), the conversion of the reaction consistently increases as the reaction temperature increases (75% at 40 ℃, 88% at 60 ℃, and 96% at 80 ℃ after 2 h, respectively). Moreover, the conversion of the reaction very much depends on the reaction time; the production of 4a smoothly increases as the reaction time when monitored by TLC (20% after 30 min, 50% after 1 h, and 75% after 1.5 h). This result indicates the condensation of the phosphoranes with aldehydes does occur in not a pure THF environment but rather a non-conventional reaction medium having an enhanced solvating power by the addition of THF, tunning the reaction selectivity (i.e., (E): (Z)-ratio). Tunning of these reactions by using other cosolvent systems is being studied and the results will be presented in due course. 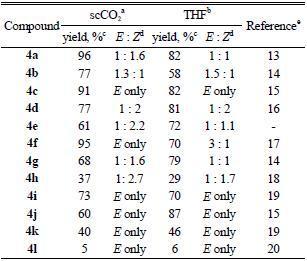 The chemical reactivity of 2 in scCO2 was further examined by the reaction with a ketone. The reaction of 2 with 4-t-butylcyclohexanone gave the corresponding olefin compounds (5) in a low conversion (13% for 5a21) even after a long reaction time (16 h). The same reaction in THF gave a higher, but still unsatisfactory yield after heating at refluxing THF for 16 h (38%).

Wittig reaction of 2a with 3a. A representative procedure for reactions of 2 with 3/4.

(Benzyl)triphenylphosphonium bromide (435 mg, 1.00 mmol) was dissolved in anhydrous THF (1.5 mL) and a 15 M solution of sodium methoxide in methanol (100 μL) was added and stirred for 5 min to give a red solution of (benzylene)triphenylphosphorane (2a). 2a was transferred into a tubular stainless steel reactor of 24 mL capacity via a syringe and benzaldehyde (92 mg, 0.87 mmol) were added shortly. Then, the reactor was charged with carbon dioxide by pressurizing initially at 1,300 psi and immersed in the oil bath at 40 ℃. The temperature of reaction mixture was raised to 80 ℃, while the pressure reached at 2,000 psi. After stirring magnetically for 2 h, the reaction mixture was cooled and CO2 was vented into dichloromethane. The residue was dissolved in dichloromethane and the organic solvent was evaporated under reduced pressure. The 1H NMR spectra were recorded for crude products to determine the isomeric ratios, otherwise the residue materials were purified by column chromatography on silica gel (elution with 50 % hexane in benzene then 5 % ethyl acetate in hexane) to give 4a as two separate isomers; (E)-isomer (58 mg, 37 %) and (Z)-isomer (93 mg, 59 %).

Other compounds were prepared analogously and spectral data of compounds 4e which have been not reported, are as follows.