The ligand behavior of the nitrite anion is of interest because it can bond the metal through a number of different coordination modes, as shown in Fig. 1.1 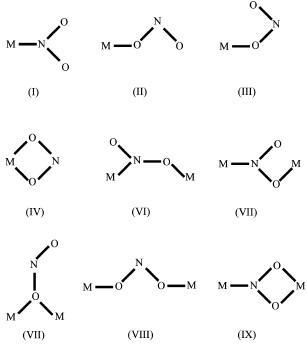 Monodentate coordination may occur either through nitrogen to give a nitro complex or through oxygen to give a nitrite complex. Bidentate coordination is known to take place either by chelation or by forming a bridge. In general, three types of ligand binding modes are possible for mononuclear chromium (III) complexes. These are the nitro (Cr-NO2) and either monodentate (nitrito-O) or chelating bidentate (nitrite-O,O’) (Cr-ONO) binding modes. 2 Moreover, the cyclam (1,4,8,11-tetraazacyclotetradecane) ligand is moderately flexible structure, and can adopt both planer (trans) and folded (cis) configurations. There are five configurational trans isomers for the cyclam which differ in the chirality of the sec-NH centers. The trans-V configuration which is symmetrical about the diagonal can fold to form cis-V isomer.3 The 14-membered cyclam ligand and its derivatives are involved in diverse application fields such as catalysis, enzyme mimics, selective metal recovery, therapy and diagnosis.4 We previously described the spectroscopic and ligand-field properties of cis-[CrIII(cyclam)L2] n+ system (L=en/2, pn/2, NH3, F−, Cl−, Br−, NCS−, N3−, ONO−, ox2−/2).5-15 The electronic absorption and infrared spectra can be used diagnostically to identify the geometric isomers of chromium(III) complexes with various mixed ligands.16-18 However, it should be noted that the assignments based on spectroscopic investigations are not always conclusive.19 The present investigation was undertaken in order to supply additional details of IR spectral criteria used to distinguish nitrite and nitro linkage isomers, and to confirm stereochemical structure of [Cr(cyclam) (ONO)2]NO2.

The free ligand cyclam was purchased from Strem Chemicals. All chemicals were reagent grade materials and used without further purification. The cis-[Cr(cyclam)(ONO)2]NO2 was prepared as described in the literature.20 The far-infrared spectrum in the region 530-50 cm−1 was recorded with a Bruker 113v spectrometer on a microcrystalline sample pressed into a polyethylene pellet. The mid-infrared spectrum was obtained with a Mattson Infinities series FT-IR spectrometer using a KBr pellet. The IR measurements were carried out at a room temperature and spectral data were analyzed with the GRAMS/32 software package.21 Analyses for C, H, and N were determined on a Carlo Erba 1108 Elemental Vario EL analyzer. The room-temperature visible absorption spectrum was recorded with a HP 8453 diode array spectrophotometer. Elemental analysis for [Cr(cyclam)(ONO)2]NO2= C10H24CrN7O6: Found (Calc.): C, 30.12 (30.77); H, 5.98 (6.19); N, 24.53 (25.12)%.

Structural properties. We previously reported the X-ray crystal structure of cis-[Cr(cyclam)(ONO)2]NO2.22 The structural analysis showed the space group C2/c of the monoclinic system with a cell of dimensions a=9.878 (2), b=11.813 (2), c=14.837 (3) Å and Z=4. A perspective drawing of cis-[Cr(cyclam)(ONO)2]+ cation together with the atomic labeling is depicted in Fig. 2 for convenience. 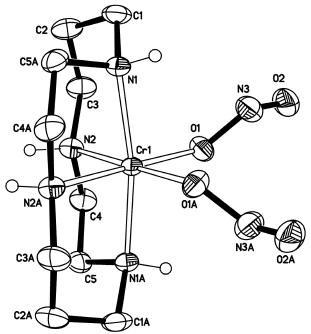 The coordinated nitrite anions are each bound to chromium ion via only one oxygen atom. The macrocyclic cyclam ligand is folded the N(2) and N(2A) direction with four N atoms coordinate to the Cr atom. The two nitrito ligands coordinate to the remaining positions of Cr atom in a cis configuration. But the non-bonded nitrite oxygen atoms are located trans to the Cr metal in monodentate nitrite coordination. The crystal consists of dinitrito(cyclam)-chromium(III) monocation and nitrite anion in a molecular ratio of 1:1, so that it can be formulated as cis-[Cr(cyclam)(ONO)2]NO2. This is in agreement with elemental analysis. The complex cation has its central Cr atom in a distorted octahedral coordination with four nitrogen atoms and two nitrite oxygen atoms in a cis position. The crystals are held together by hydrogen bonds between secondary NH groups and nitrite ligands. The geometry of title compound was found to be cis configuration with respect to monodentate nitrito oxygens. The complex cation has its central Cr atom in a slightly distorted octahedral coordination with two Cr-O and four Cr-N bonds. The mean Cr-N and Cr-O bond distances are 2.0895(14) and 1.9698(14)Å while the O(1)-Cr-O(1A) angle is 94.03(9)o.

IR spectral properties. The mid-infrared spectrum of cis-[Cr(cyclam)(ONO)2]NO2 recorded at room temperature is presented in Fig. 3. 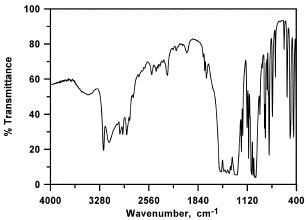 The absorption near 3468 cm−1 and broadness of the band indicate that there are hydrogen bonds in this complex. The sharp peaks at 3223 cm−1, and 3000-2800 cm−1 regions are due to the symmetric and antisymmetric N-H and C-H stretching modes, respectively. The strong absorption band at 1512 cm-1 and the two bands at 1445 and 1426 cm−1 can be assigned to NH2 and CH2 bending modes, respectively. In the nitro ligand the charge is delocalized resulting in two N-O bonds formally of bond order 1.5. We would expect two N-O absorptions because there are two N-O bonds. Because the bonds are similar they will couple to give a symmetric and an antisymmetric stretching vibration with similar frequencies. In the case of the nitrito ligand one N-O bond can be viewed as a single bond and the other as a double bond which means we could expect to see on higher vibrational frequency and one lower one. The transition metal complexes containing an O-bound nitrite ligand exhibit an intense antisymmetric stretching frequency, νas(ONO) at ~1460 cm−1 and a symmetric mode, νs(ONO) at ~1050 cm−1 and deformation band, δw(ONO) at ~820 cm−1.2 The three strong absorption peaks at 1464, 1056 and 826 cm−1 are characteristic of the nitrito ligand toward chromium(III). It is noteworthy that nitrito complexes lack the wagging modes near 620 cm−1 which appear in all nitro complexes. We have not been able to detect any band assignable to the Nbonded ρw(NO2) vibration in the 600-650 cm−1 region. 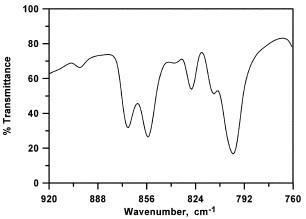 The infrared spectroscopy is also very useful in assigning configuration of cis and trans isomers of cyclam chromium(III) complexes. It is well known that cis isomer exhibits at least three bands in the 890-830 cm−1 region due to the N-H wagging modes while the methylene vibration splits into two peaks in the 830~790 cm−1 region. However, trans isomer shows two groups of bands, a doublet near 890 cm−1 arising from the secondary amine vibration and only one band near 810 cm−1 due mainly to the methylene vibration.12 Fig. 4 shows an expanded view of the IR spectrum in the region 920-760 cm−1 of interest. The present complex exhibits three bands at 899, 868 and 855 in the N-H wagging frequency region. The CH2 rocking bands at 812 and 799 cm−1 are also observed. These vibrational modes are not affected by differing counteranions.

Meta-ligand stretching and ring-deformation bands occur in the far infrared range. The far-infrared spectrum (530-50 cm−1) was measured in order to assign the Cr-ONO and Cr-N(cyclam) stretching vibrations. The far-IR spectrum is shown in Fig. 5.

The Cr-N and Cr-ONO stretching bands in the far-infrared spectrum to which we have assigned a cis dinitrito geometric configuration exhibit splitting, whereas the trans isomer shows no splitting of these bands, as would be expected from the lower symmetry of the Cr-N skeleton in the cis complex. For the cis-[CrN4(ONO)2]+ complex with C2v symmetry, the group theoretical analysis predicts four Cr-N and two Cr-ONO infrared-active stretching vibrations, respectively. The four peaks in the range 495-410 cm−1 can be assigned to the Cr-N(cyclam) stretching modes. Typically, all nitrito complexes exhibit absorption bands in the 370-340 cm−1 region due to the n(M-ONO).1 The two absorptions at 364 and 353 cm−1 are assigned to the Cr-ONO stretching modes. The title complex was clearly consistent with the cis configuration. A number of absorption bands below 319 cm−1 arise from the skeletal bending and lattice vibration modes. 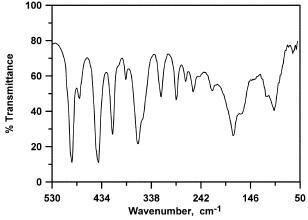 The infrared spectral properties of the title complex are in agreement with the result of X-ray crystallography, which show that the NO2 group is bonded to chromium(III) through the one O of its oxygen atoms and the cyclam ligand adopts the cis-V(RRRR) configuration.