films of gold nanoparticles were formed on indium tin oxide (ITO) by an electrodeposition method from an aminosilicate stabilized gold colloid solution. The thin films were examined by cyclic voltammetry (CV), scanning electron microscopy (SEM), UV-visible, and energy dispersive X-ray spectroscopy (EDXS). The surface coverage of gold nanoparticles on the thin film was estimated to 1.2 nanomole/cm2. An anthraquinone-2, 6-disulfonic acid, disodium salt (AQDS) self-assembled layer was generated by immersing gold thin film into 1mM of AQDS in 0.1M HClO4 solution for over 20 hours. As a result, a new absorbance peak from the multi-layers (AQDS/thin film of gold /ITO) was obtained about at 690 nm. Also, the surface plasmon absorption of multi-layers was measured by UV-Visible spectrometer along with chronoamperometry by applying the various potentials from +0.5V to -0.5V. The maximum surface plasmon absorption band at 550 nm was decreased by applying negative potentials. The change of absorbance was correlated with the surface coverage of the AQDS indicating the pseudo-capacity surface state of the AQDS layer was coupled to the energy level of the plasmonband by applied negative potentials.

Nanopartiulate materials can be applied in various areas such as solar energy conversion, chemical sensors, biological labeling, ultrafast data communication and optical data storage (1-3). In particular, thin films of gold nanoparticles have been applied to biomedical sensors (4). The organization of chemical assemblies of nanoscale dimensions has been extensively researched because of the potential impact on nanotechnology and miniaturized devices. These materials of nanoscale dimensions can give unique electronic, optical, and nonlinear properties (5). A particularly intriguing class of nanoparticles is noble metal nanoparticles such as gold and silver. Gold nanoparticles have been synthesized with various ligands. Gold thin films have been formed by an electrochemical deposition method from an aminosilicate-stabilized gold colloid solution. The electrochemical and optical properties of these thin films have been studied in detail (6-9). Gold nanoparticles have a characteristic surface plasmon absorption band that arises from the collective oscillation of conduction band electrons induced by interaction with an applied optical or electric field. The plasmon absorbance peak energies are a function of the dielectric constant of surrounding medium, embedding material or interparticle resonances. Finally, self assembled layers (SAM) of alkanethiols on gold nanoparticles have been studied extensively because of the possibilities of controlling the molecular architecture at the electrode-solution interface (10-15). The spectroelectrochemical characterizations of these thin films are highly important, as they are promising substrates for enzyme electrode and related biosensors. A novel the method for the detection of polynucleotides and oligonucleotides which utilizes the distance-dependent optical properties of aggregated gold functionalized nanoparticles with an agent has been reported. This method has the advantages of both rapid detection and good selectivity (16). The phenomenon of aggregation of the particles in a gold colloid solution upon the addition of a crosslinking agent is well documented (17-19). The position and profile of the surface plasmon resonance peaks on silver nanoparticles in solution depends on the applied potentials (20). The optical properties of a colloidal gold solution were reported in response to potential modulation between 0.6 V and -1.0 V in the solution (21).

In this letter, gold thin films were formed on indium tin oxide (ITO) electrodes in gold colloid solution by electrochemical method and the surface was characterized by SEM and EDXS. The coverage of gold thin films on the ITO was evaluated by electrochemical measurement. The layer of AQDS on the gold thin film of ITO was formed by aselfassembly, and the coverage of AQDS calculated from electrochemical and spectroscopy measurements. The change of surface plasmon absorption of multilayers was measured with UV-Visible spectroscopy while varying applied potentials from +0.5 V to -0.5 V using chronoamperometry.

Gold solutions were prepared using previously reported procedures (4-7). Briefly, the EDAS was dissolved in 0.1 M KH2PO4 solution. Then 5 mL of 1.0M EDAS in 0.1M KH2PO4, 35 mL of methanol, and 5 mL of 0.1M solution of HAuCl4 were placed in a clean 150 mL Erlenmeyer flask. A clear yellow solution resulted, which was sonicated for 10 minutes. After this procedure, 0.5mL of 0.1M HCl and 5 mL of distilled water was added to hydrolyze and condense of the solution. The solution was sonicated for another 10 minutes. 0.250mL of 5% NaBH4 was then added to reduce the solution, which was sonicated a further 10 minutes. The pH of solution was adjusted to 2.5 via dropwise addition of concentrated HCl. The self-assembled layers were formedby immersing the gold electrode into 1mM of AQDS in 0.1M HClO4 solution for over 20 hours. The layer-covered gold electrode was rinsed with 0.1M HClO4 and water.

A gold thin film on ITO was formed from gold colloide solution after about 400 cycles of cyclic voltammetry between -0.4 V and 1.0 V with a scan rate of 100 mV/s. As the cyclic voltammograms are shown on Fig. 1, the gold thin film of nanoparticles grow in a cyclic-by-cyclic fashion. The electrochemical properties of the gold thin film on ITO electrode was obtained by CV in 0.1M HClO4 solution with a scan rate of 100 mV/s as shown on Fig. 2. The oxidation and reduction peaks of gold were obtained at 1.4 V and 0.7 V in 0.1M HClO4 solution, respectively. The surface coverage was calculated of 1.2 nanomole/cm2 by measuring the area of the reduction peak of gold in 0.1M HClO4 solution. The UVVisible spectrum of the gold film on the ITO was measured to indicate a characteristic maximum peak about 550 nm. The SEM image presented in Fig. 3 show a diameter of about 20 nm with isolated large clusters of gold particles. Thin film gold nanoparticles were confirmed by EDXS. 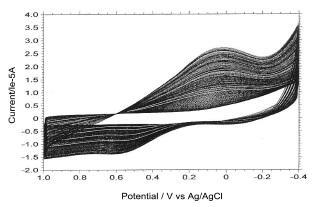 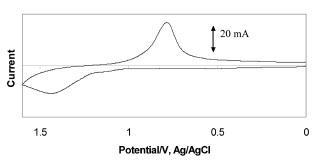 Fig. 2.The cyclic voltammorgram of thin film of gold nanoparticles on ITO. 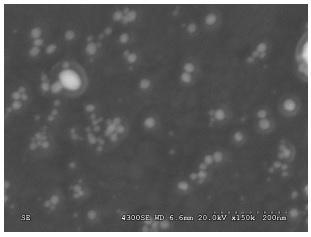 Fig. 3.SEM image of the gold nanoparticles on ITO.

For comparison, the cyclic voltammograms of 10-5 M AQDS in 0.1M HClO4 with a glassy-carbon working electrode were obtained with a scan rate of 100 mV/s. The prominent peak at -0.12 V was due to the reduction of AQDS. The oxidation peak was shown at 0.03 V with a peak separation of 150 mV, the half peak widths of reduction and oxidation were 88 mV and 114 mV, respectively. The peak current and total charge of reduction was very close to that of oxidation. The CV of the self assembled AQDS layer on gold thin film was obtained in 0.1 M HClO4 with a scan rate of 200 mV/s. The CV exhibited a redox reaction of the self assembled layer AQDS at -0.006V for reduction and +0.080 V for oxidation. The peak-to-peak separation was 86 mV. The reduction and oxidation peak potentials of assembled AQDS layer on gold thin film were shifted to the positive potential direction compared with reduction and oxidation potentials of AQDS in 0.1M HClO4 solution by the glassy carbon electrode. Also, the UV-Visible maximum absorption peak of AQDS layer was obtained at 320 nm. The values of surface coverage for AQDS layer was obtained by CV (ΓCV) and UV-Visible measurements (ΓUV). They were calculated by the following equations: ΓCV=Q/2FS, and ΓUV=A/1000ε, where S (cm2) is the area of electrode, Q (C) is the charge of the oxidation of AQDS, F (C/mol) is the Faraday constant, A is the absorbance at 320 nm and ε is the molar extinction coefficient (2800M-1cm-1) of AQDS in 0.1M HClO4. The ΓCV and ΓUV were calculated as 11.5 picomole/cm2, and 17.8 picomole/cm2, respectively. Various potentials were applied using chronoamperometry to study the effect of charge injection of AQDS self assembled layer on gold thin film. Gold thin film absorption band mexima were obtained at 540 nm, while the AQDS layer coupled the nanopartices on the gold thin film and had absorption at 690 nm. The differences of surface plasmon absorption bands were obtained using UV-Visible spectrometer with various potential ranges from +0.5 V to -0.5 V of 300 seconds potential width. The potential dependent surface plasmon absorption spectra were shown on Fig. 4. The shapes of the plasmon absorption band of the self assembled layer AQDS on gold were changed to applied various potentials. By varying the potential, maximum surface plasmon band intensity was observed to decrease and broaden with increased applied negative potential. This is a result of thin film particle aggregation and the electron enrichment on the self assembled layer AQDS. The surface plasmon band of nanoparticle collide solution has been determined by the density of electrons, the effective electron mass, and the size and shape of the charge distribution. The peak positions are related directly to the relative electron concentration through λf2 = λi2 Ni/Nf where N is the conduction electron concentration and i and f refer to initial and final states, respectively (20). The self assembled AQDS layer on the gold thin film is able to accumulate charge which makes the blue shifts of plasmon peak a function of potential. This is in good agreement with previous observations (22). The change of optical properties of the multi-layers by changing their state of charge has been demonstrated. This system can be applied to measure the spectroelectrochemical responses as a sensor for a redox species on gold thin films in the future. 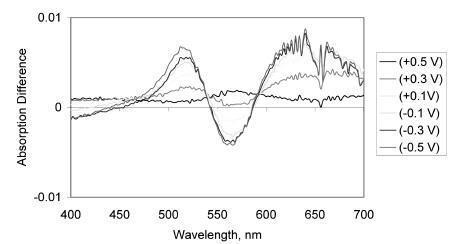