Polymer-based electrically conductive pastes have been used to make the conductive paths between voltage sources and devices. The pastes used for these applications consist of two main components: a polymer binder and a conductive filler. Having both low viscosity and good metal-encapsulating properties, cellulose acetate butyrate (CAB) was regarded to be a good candidate as a binder for the conductive paste. We have prepared a formulation for a novel conductive paste based on CAB. Preliminary studies showed that this conductive paste revealed stable conductivity, together with uniform coating and flexibility.

Most significant phenomenon which contributes to the conductivity of polymer-based conductive systems is the ‘percolation point’, where some of the metal particles begin to contact one another, creating a conductive path. After this point, addition of small amounts of metal filler will produce a rapid drop in resistance. Continued addition of metal filler will eventually reach a point where the resistance levels off, and not much improvement in the conductivity will be obtained even with increased loading of the metal filler. Therefore, good formulations of conductive pastes will use an optimal metal configuration, preferably flake-shaped, at a loading toward the bottom of the percolation point curve. It is the key in this field of study to lower this percolation point (PP), due to the high cost of silver, and to achieve stable conductivity.

The electrical conductivity was investigated by measuring the surface resistance (Ω/㎠) of the films according to the conventional four-terminal method using aluminum foil electrodes.8 The resistance across the top layer of the prepared films was measured by placing two electrodes (positive and negative) connected to an ohmmeter with a fixed distance on the surface of a conductive film. The measurement was carried out at three different places with the same distance and the average was taken as a surface resistance of the prepared conductive film. It should be noted that for most cases the film thickness of the conductive film was not considered because the same Meyer bar was used for the film formation and the resistance of the films within the experimental range of thickness (25 to 75 μm of wet film deposit) revealed no difference with the variation of the film thickness. The percolation point was regarded as the point of metal filler/binder ratio where the surface resistance (Ω/㎠) of the measured dried film surpassed 1. For example, if the resistance was measured as 1 for the sample with filler/binder ratio of 40/60, the percolation point was taken as 40.

It is generally known that the preferred silver filler size for the conductive paste application is between 1 and 30 μm: below 1, electrical properties are adversely affected and above 30, the composition will be too difficult to be applied onto the substrate.9 All the metal fillers used for our experiments had the average size distribution within this desired range. Samples with different silver forms (flake, particle and powder) were prepared at the fixed silver/binder ratio of 66/34 (wt.%) using CAB 551-0.2 as a binder and MEK as a solvent, and their resistance was measured (Table 1).

As the films prepared using silver flake and powder showed much better conductivity (lower resistance) than those from silver particle at this initial silver filler/binder ratio, further electric measurement for both silver flake and powder was carried out at various silver/binder ratios using CAB 551-0.2 as a binder. The concentration of the total solids (CAB and silver) was set to 72.4 wt.%. As shown in Table 2 and Table 3 (and also in Fig. 1), better conductivity (lower resistance), with lower percolation point (60 for silver powder and 56 for silver flake), was obtained for silver flake. This was consistent with the assumption that a flattened metal flake configuration would increase the area of metal contact, resulting in more conduction paths compared to the contact point generated from either metal powder or particle.10 From the above results, it was concluded that metal configuration has a significant effect on the conductivity of the films prepared, and flake is superior to both particle and powder shapes. 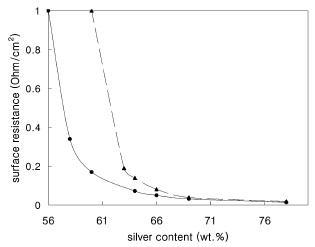 In order to investigate the binder effects on the conductivity, silver flake was added to a MEK solution of various binders at different filler/binder ratios under the same conditions and the dried films, prepared in the same way as previously described, were monitored for their resistance. The results are summarized in Table 4.

CAB 551-0.01 showed better conductivity (lower resistance) than the 551-0.2 and 381-0.1 versions and not much difference in conductivity was observed between CAB 551-0.2 and 381-0.1 over the ranges of filler/binder ratios. This indicates that the viscosity is an important factor which contributes to achieve an optimal silver flake configuration since the major difference between CAB 551-0.01 and the other CAB versions is their viscosity (Table 5).

It was thought that a binder with higher viscosity reduces the ability of the metal fillers to orient at the surface, and thus the optimal orientation of the fillers to generate the conductive path is impeded. To further investigate the viscosity effect, the sample with CAB 381-0.1 having the silver content of 56 wt.% was diluted from 50 wt.% to 40 wt.% and 33 wt.% of the total solid (CAB + silver) concentration, and their resistance was compared (Table 6). As expected, better conductivity (lower resistance) was obtained as the sample was more diluted. As the viscosity of the solution is closely related to its concentration, this result confirmed that the viscosity is the key factor for determining the conductivity of the samples.

Table 5.a(%) is the average value for the butyryl composition out of acetyl, butyryl and hydroxyl substituents in 1.

The CAB was then compared with other types of acrylic binders; PMMA, P(BMA-co-MMA) and PBMA (Table 5). The resistance for the Ag flake/PMMA system, having the lowest viscosity among three acrylic binders, was lower than that of Ag/P(BMA-co-MMA), which then revealed much lower resistance than that of Ag/PBMA, but the films obtained from both PMMA and P(BMA-co-MMA) were of worse quality. The films were in fact too poor to measure conductivity at the lower loading of these binders. Better films were formed as the loading of the PMMA or P(BMA-co-MMA) was increased. It was thought that PBMA and P(BMA-co-MMA) having more hydrophobic longer alkyl chains (butyl group) better encapsulates the silver pigment, forming better coating, but this encapsulation of the pigment also caused higher resistance for the PBMA and P(BMA-co-MMA) system. Further studies involving various other acrylic binders having different molecular weights are, however, required for this assessment. The film’s integrity also seemed to be adversely affected when the binder’s loading was too low especially for the less viscous binder, such as PMMA. Interesting point from the results in Table 4 was that CAB 551-0.01 offered much better conductivity (lower resistance), together with lower percolation point than PMMA and P(BMA-co-MMA), two most widely used binders for the conductive ink system. In addition, all the CAB binders offered much better quality of the film than the acrylic binders even at low loadings. The better conductivity (lower resistance) of the film prepared using CAB was ascribed to its low viscosity, and the high butyl content in CAB (see Table 5) seemed to offer a good film-forming property. Considering the balance between conductivity and film quality, CAB 551-0.01 was regarded as the best binder among those investigated, and this was used for further studies. The studies, so far, have been mainly focused on the conductivity, and it was necessary to look into other properties such as flexibility.

Plasticizer is a material of low molecular weight added to a polymer to separate the molecular chains. This results in a depression of the glass transition temperature, reduced stiffness and brittleness, and improved processability. Dibutyl phthalate (DBP) was used in 5 and 10 wt.% relative to CAB 551-0.01 and the resistance of the dried films at three filler/binder ratios (60/40, 56/44 and 52/48) was measured. As shown in Table 7, the resistance value for the samples containing the plasticizer was higher compared with their original silver/binder system, and the difference became larger as the silver/binder ratio gets closer to the percolation point.

When benzyl butyl phthalate was used as a plasticizer instead of dibutyl phthalate, much higher increase in resistance was observed. The preferred glass transition temperature of the binder for the conductive application is between 45 and 105 ℃. Under 45 ℃, blocking occurs, whereas films become fragile above 105 ℃. The DSC studies for the samples containing CAB/dibutyl phthalate in 95/5 and 90/10 wt.% were attempted but did not give any reliable data. As the presence of the plasticizer seems to have an adverse effect on the conductivity, especially at the lower silver/binder ratio, the maximum loading of the plasticizer was set to 5 wt.% relative to the binder. The films containing this level of plasticizer appear to offer good flexibility. From the above results, it was found that the plasticizer not only provided benefits to the prepared films such as flexibility and uniformity, but they also adversely affected the conductivity of the Ag/CAB system. Therefore, it was concluded that the amount (and the type) of the plasticizer has to be carefully controlled.

Finally, it has to be added that the effect of the cosolvent was also investigated to control the drying rate using butyl acetate, and the results showed that the presence of the co-solvent significantly increased the resistance for the conductive paste. It was thought that the more viscous butyl acetate than MEK increased the overall viscosity of the solution, affecting its conductivity. The use of co-solvent was, therefore, not recommended as no significant improvement in the film’s properties was obtained when the co-solvent was used.

Based on the knowledge we have gained so far, the formulation for our conductive paste was suggested: silver flake as a metal filler, CAB 551-0.01 as a binder, dibutyl phthalate as a plasticizer and MEK as a solvent. The plasticizer/CAB ratio was 95/5 by weight and the total solid content [(silver(g) + CAB(g) + DBP(g)) / (silver(g) + CAB(g) + DBP(g) + MEK(g))] was 55 wt.%. The films prepared from this conductive paste showed surface resistance of 5.2 × 10-2 Ω/㎠ and percolation point of 50 (Table 8 and Fig. 2). A steep percolation curve and stable conductivity up to 60 wt.% of the silver loadings were obtained, implying that reliable conductivity can be produced regardless of the substrates applied onto and films’ thickness. In addition, the films prepared from the CAB-based conductive paste offered uniform coating and good flexibility. 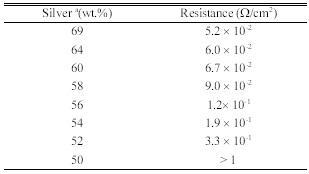 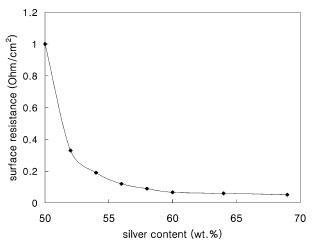 Fig. 2.Percolation curve of the conductivity for the CABbased conductive paste.