In recent years there has been increasing concern over the public health threat presented by the introduction of N-heterocyclic compounds into the environment. Little is known about the environmental fate of Quinoline, a heterocyclic compound found in coal tar, mineral oil and bone oil. In the Chemical industry it serves as a solvent and is the starting material for the synthesis of quinoline dyes and pharmaceuticals. Quinoline and some of its derivatives were reported to be toxic, carcinogenic and mutagenic.1-4 The widespread use of quinoline and its derivatives entails that these compounds are distributed in the environment thus polluting soil and water.

Conventional biological processes (activated sludge tricking filters) can destroy a large fraction of biodegradable organic compounds found in wastewater and can remove additional materials by adsorption. But most of the hazardous compounds pass through conventional wastewater treatment facilities unaltered. In addition, they also have adverse impact in the composition and activities of microorganism in activated sludge flocs, thus reducing the overall performance of these facilities. The removal of these compounds is a real challenge for waste treatment engineers and scientists. There have been several reports on the bacterial degradation of quinoline.5-9

Investigation on the taxonomy of the quinoline degrading bacteria showed that in most cases they were members of the genus pseudomonas. Pseudomonas are characterized by their ability to use a wide rage of organic compounds as sole sources of carbon and energy. Mostly these compounds are aromatic and heterocyclic substances.However, the ability to degrade quinoline does not appear to be confined to pseudomonas. A Gram-negative, aerobic moraxella bacterium and a Nocardia species were described showing these degrading properties.5,8,10

Immobilization of microbial cells have received increasing interest in recent years.11,16 It offers a promising potential for the improvement of efficiency of bioprocesses. Compared with free cells, immobilized cells have several advantages. The main advantages in the use of immobilized cells are their higher operational stability, their ease of use in a continuous reactor and their ability for scale-up.

Activated carbons are a group of amorphous forms of carbon with a highly developed pore structure. Due to high adsorption capacity, activated carbon finds wider applications in many gas phase and liquid phase adsorption systems. It is used as an industrial catalyst. Activated carbon is also used as a carrier for cells or enzymes in biochemical reactions.17

In this paper we report the efficiency of free and immobilized bacterium Bacillus brevis on the degradation of Quinoline and the storage capacity and reusability of the immobilized biocatalyst.

The microorganism used in this study was a pure strain, isolated from the soil suspension of carbonization plant effluent channel. One gram of the soil suspension was inoculated into sterile tubes with 9 ml of the medium containing nutrient broth and cetrimide agar. After two days of incubation, the contents were examined for turbidity and the turbid portion was streaked out on plates containing potassium thiocyanate as a sole source. Colonies that grow on the plates were selected for identification The bacterium was analysed by biochemical, morphological and physiological tests in Institute of Microbial Technology, Chandigarh. The bacterium is motile, mesophilic and salt tolerant (up to 9%). It grows up to a temperature of 37 ℃ and pH 9. There is a growth of the bacterium under aerobic and partial anaerobic conditions. The results of biochemical tests match with Bacillus brevis as per the Bergey’s manual of systematic Bacteriology (Vol.1, 1989). Hence the organism was identified as Bacillus brevis and labeled as MTCC 3136.

The organism was grown in nutrient broth medium for 48 hrs at 35 ℃ under stationary condition. The culture was then harvested by centrifugation at 10,000 rpm for 20 minutes, washed twice with sterilized water and resuspended in sterile buffered water. The centrifuged biomass was used for the degradation.

In biodegradation, the experiments were performed either in batch reactor or continuous flow reactor (Fig. 1) using free or immobilized cells respectively. Erlenmeyer flasks plugged with foam stopper were used as batch reactor. For the continuous flow reactor acrylic tube of 1m length and 10 cm diameter was used. The samples were withdrawn periodically and analysed for growth of the bacterium and quinoline degradation using Hitachi U-2001 spectrophotometer. The concentration of quinoline was determined by measuring the absorbance of the centrifugate at 313 nm. The growth of the cells in batch reactor was determined by measuring the absorbance of the sample at 540 nm. 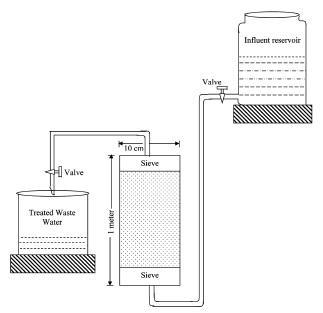 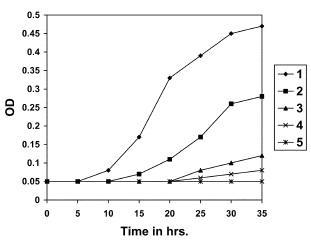 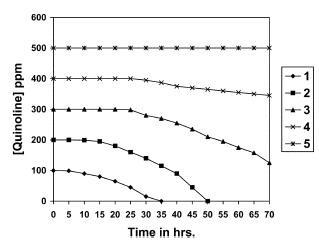 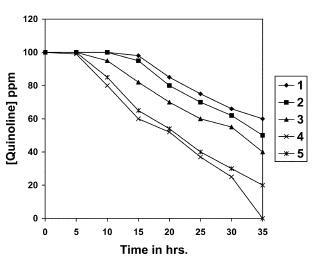 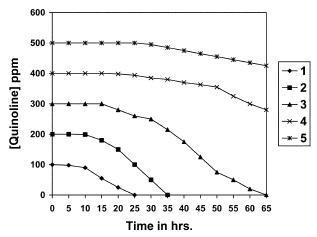 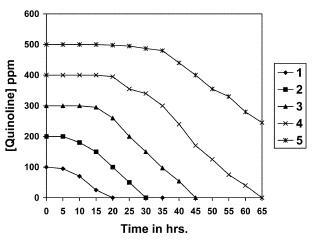 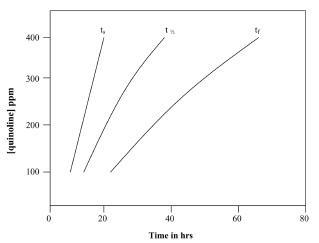 Storage stability and repeated usability of the cells immobilized on carbon

Since the efficiency of degradation is higher with the cells immobilized on coconut shell carbon, we had carried out an experiment to find its storage stability and repeated usability for three months. The concentrations 100,200 and 300 ppm of Quinoline were used for the degradation by cells immomobilized on coconut shell carbon. A complete degradation of 100 ppm of Quinoline is observed in 20 hours of hydraulic retention time and the percentage of removal decreases with increase in Quinoline concentration (Fig. 8). The biocatalyst after its use was washed with double distilled sterile water and kept in the column for a month. The experiment was repeated with this biocatalyst using the same concentrations of Quinoline two times and the results are displayed in Fig. 8. The figure shows that the efficiency of this biocatalyst remained same every month for three months. 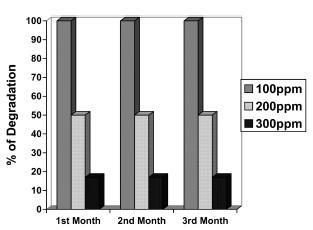 Table 1.Comparison of the efficiencies of free and immobilized cells

The immobilized cells are advantageous in wastewater treatment due to easy transportation and storage. During storage and transportation the immobilized organism is likely to be affected due to environmental alteration and thus the efficiency deteriorates. If immobilization of cells were only on the surface of the carrier materials, the cells might be sloughed off by attrition during continuous treatment leading to a decrease in efficiency of the immobilized cells in degradation process. The experiment did show that the cells had maintained its efficiency in the removal of Quinoline. Hence the immobilized organism must be in the pores of the activated carbon. This fact is considered to be important while advocating the immobilized system for biodegradation or bioconversion of organics in wastewater.

The microbe Bacillus brevis grows by consuming quinoline as C, N and energy sources. The growth of the organism and quinoline degradation efficiencies are more at pH 9. The immobilized cells are efficient than free cells. Cells immobilized on activated coconut shell carbon are found to be more efficient than cells immobilized on foam pieces. The storage stability and repeated usability of the biocatalyst developed by immobilizing the bacterium on to coconut shell carbon will be very useful for the degradation of Quinoline in wastewater.