Interest in the study of Schiff base hydrazones and their complexes has been growing because of their wide importance as antimicrobial, anti-tuberculosis, anti-tumour and antiviral activities6-16 as well as models for biologically important species especially for the metal containing sites in metallo-proteins and -enzymes.17,18

The monohydrazones of benzil and diacetyl may exist in trans position. In the presence of metal ion, they may attain a cis (vicinal) configuration. Complexes involving such hydrazones may be used as an intermediate to prepare homo/hetero binuclear complexes by template condensation with suitably oriented aldehyde or ketones19,20 in the presence of homo/hetero metal ions. In continuation of our consistent efforts towards synthesis and characterization of such type of complexes21-23 we report here the synthesis and characterization of hither to unknown homo binuclear complexes with some Schiff base monohydrazone derivatives obtained from the reaction of thiocarbohydrazide, benzilmonohydrazone/ diacetylmonohydrazone and salicylaldehyde in presence of UO22+, ZrO2+,Th4+ and VO2+ ions.

All the chemicals used of AR grade. The solvents were purified before use by standard procedures.

Thiocarbohydrazide was synthesized according to literature method of Audrieth et al.24

All complexes were prepared according to the following procedure. An ethanolic solution of hydrated UO2(VI)/Th(IV)/ZrO(IV) nitrates/vanadyl sulphate (1 mmol in 10 ml) was added to a hot ethanolic solution of the mixture of thiocarbohydrazide (1 mmol in 10 ml), benzilmonohydrazone/ diacetylmonohydrazone (2 mmol in 20 ml). The resulting mixture was refluxed on a water bath for 2-3 hours during which a coloured complex was precipitated out in each case. The ethanolic suspension of the above complexes were treated with salicyldehyde (2 mmol in 10 ml EtOH), which is followed by the corresponding metal salt (1 mmol in 10 ml EtOH). The mixture was again refluxed for 3-4 hours on a water bath during which the metal complexes of different colour than the precursor complexes were obtained. The progress of the reaction was signaled by colour change of the resulting mixture. These were filtered off, washed several times with ethanol followed by ether and finally dried over anhydrous CaCl2.

The metal contents in the complexes were determined gravimetrically following standard procedures.26 A weighed quantity of the compound (0.2- 0.3 g) was treated with a few drops of concentrated H2SO4 and 1 cc. of concentrated HNO3. It was heated till all the organic matter decomposed and sulphur trioxide fumes came out. The same process was repeated two to three times to decompose the substance completely. Then it was dissolved in water and the resulting solution was used for analysis of metal ions. Uranium, thorium, zirconium and vanadium were precipitated as ammonium diuranate, thorium oxalate, zirconium mandelate and ammonium vanadate followed by subsequent ignition to their respective oxides as U3O8, thoria (ThO2), zirconia (ZrO2) and V2O5. Sulphur was determined as BaSO426. Room temperature magnetic susceptibilities were measured by Gouy method27 using Hg[Co(NCS)4] as the calibrant. The molar conductance measurements were carried out at room temperature with a Toshniwal conductivity Bridge (Model CL-01-06, cell constant 0.5 cm-1) using 1×10-3 M solution of the complexes in DMSO. Carbon, hydrogen and nitrogen contents of the complexes were determined by using a MLW-CHN microanalyser. FTIR spectra in KBr pellets were recorded on a varian FTIR spectrophotometer, Australia. The electronic spectra of the complexes in DMSO were recorded on a Perkin-Elmer spectrophotometer. Thermogravimetric analysis was done by Netzch-429 thermoanalyser. The 1H-NMR spectra of the complexes were recorded in DMSO-d6 medium on JEOL GSX-400 model equipment.

The complexes were formulated from the analytical data and molar conductance data support the suggested formulae (Table 1). The complexes are highly coloured and insoluble in water and common organic solvents such as ethanol, methanol, acetone, CCl4, CHCl3, benzene and ether but moderately soluble in highly coordinating solvents such as DMF and DMSO. They are highly stable under normal conditions and all of them decompose above 250℃. The molar conductance data values in DMSO for the complexes indicate them to be non-electrolyte in nature. However, the conductivity value is higher than as expected for non-electrolytes probably due to partial solvolysis of the complexes in DMSO medium.28

As the Schiff base ligands could not be isolated, the spectra of the complexes were compared with spectra of the starting materials and other related compounds. The bands observed in the spectra of metal complexes at ~1520, ~1315, ~1090 and ~770 cm-1 are assigned to thioimide I, II, III and IV bands of TCH skeleton, respectively29. All the above bands appear nearly the same position as found in the free TCH implying non co-ordination of thioimide sulphur or nitrogen atom to the metal ion. The IR spectra of the complexes show strong bands appearing at ~1625 and ~1070 cm-1 assignable to azomethine νC=N and νN-N. The position of former band at comparatively lower frequency region than usual free νC=N value (~1650 cm-1)30-32 and that of latter band at comparatively higher frequency region than that of free N-N33 leads us to suggest that azomethine nitrogen atom has taken part in complexation as evidenced from the appearance of band in the region ~475 cm-1 due to ν(MN)34. The occurrence of N-N band at higher frequency in the IR spectra of the complexes is due to reduction of the repulsion between the loan pairs of nitrogen atoms as a result of coordination via azomethine nitrogen atoms. The splitting of (νC=N) band is probably due to the presence of the methine group in different chemical environment. A sharp band due to the phenolic (O-H) of salicyldehyde is absent in the complexes indicating the coordination of the phenolic oxygen, after deprotonation, to the metal ion, which is further supported by the appearance of a band due to ν(C-O) phenolic at much higher frequencies (~1450 cm-1) in the complexes35,36 due to partial double bond character. The coordination of the phenolic oxygen is further supported by the appearance of a non ligand band at 520-540 cm-1, due to ν(M-O)37. One would therefore expect the absence of band due to νC=O to suggest that Schiff base reaction has taken place. On scanning the spectra of metal complexes no bands due to νC=O at ~1700 cm-1 is observed. This clearly suggests that Schiff base reaction has taken place.

The uranyl complexes exhibit a strong band in the region 940-920 cm-1 and the medium intensity band in the region 830-815 cm-1 assignable to νas(O=U=O) and νs(O=U=O) mode respectively38. This observation indicates that the linearity of the O=U=O group is maintained in the complexes.39 The band at 1024 cm-1 is assigned to the ν2 mode of the NO3 group. The bands at 1480 and 1380 cm-1 are the two split bands ν4 and ν1 respectively, of the coordinated nitrate ion. The magnitude of Δν = (ν4 - ν1) = 100 cm-1 shows the unidentate coordination of the nitrate ion.40 The zirconyl complexes exhibit one strong band in the region 890-870 cm-1 which can be attributed to the ν(Zr=O) as reported earlier39 indicating the presence of (Zr=O)2+ moiety in these complexes. In the oxovanadium polychelates a strong bands at ~950 cm-1 are assigned to ν(V=O) mode.41 However in vanadyl complexes, an additional series of four bands appeared at ~1160, ~1115, ~865 and ~650 cm-1, indicating the coordination of sulphate group in unidentate manner through oxygen atom42. Besides, the bands observed at ~3430 cm-1 may be assigned to ν(O-H) of coordinated or lattice water. The representative spectrum of [(Th)2(omt)(NO3)6(H2O)2] complex is shown in Fig. 1. 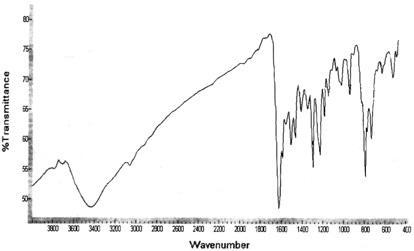 The thermogram of the complexes exhibited the characteristics of co-ordinated water. The complexes remain almost on affected up to ~130℃. After this slight depression up to 200℃ is observed. The weight loss at this temperature range is equivalent to one water molecule for VO(IV) and two water molecules for other complexes, indicating them to be coordinated water in conformity with our earlier observations for analytical and IR spectral investigations. Simultaneous elimination of coordinated water suggests them to be in the same chemical environment.43 The anhydrous complexes remain stable up to ~350℃ and there after the complexes shows rapid degradation presumably due to decomposition of organic constituents of the complex molecules as indicated by the steep fall in the percentage weight loss. The decomposition continues up to ~700℃ in each complex as indicated by the consistency in weight in the plateau of the thermo gram. The decomposition temperature varies for different complexes as shown in Table 2. The thermal stability of such complexes is found to be in the following order. The representative thermogram of [(VO)2(opt)(SO4)H2O] complex is shown in Fig. 2. 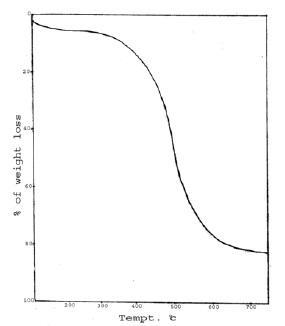 The electronic spectra of complexes in DMSO are quite similar. The UO2(VI) complexes display mainly one weak band at ~450 nm and a highly intense band in the range 280-290 nm, which may be due to 1Σg+→πu3 transitions and charge transfer transitions respectively.44 The first one of the transition is typical of the O=U=O symmetric stretching frequency of the first excited state.45 It may be noted that the band occurring at 365 nm is due to uranyl moiety because of apical oxygen →f0(U) transition46 is being merged with the ligand band due to n→π* transition as evident from broadness and intensity. The electronic spectra of ZrO(IV) complexes exhibit only one extra highly intensive band in the region 350-380 nm which may be due to charge transfer band besides the ligand bands. However, the electronic spectra could not provide structural details of these complexes. The electronic spectra of VO(IV) complexes show three bands at ~12320, ~18470 and ~25885 cm-1 corresponds to transitions, dxy(b2)→dxzdyz(e), dxy(b2)→dx2-y2(b1) and dxy(b2) →dz2(a1) respectively, indicating the complexes to be in distorted octahedral environment under C4V symmetry.47 It is to be noted that though both the VO(IV) ions are in different chemical environment (N4 and N2O2) no spectacular change is noticed in their electronic spectra. The representative spectrum of the [(ZrO)2(opt)(NO3)2(H2O)2] complex is shown in Fig. 3.

All the complexes except VO(IV), are diamagnetic consistent with their d0 and f0 electronic configuration. The magnetic moment values for the oxovanadium(IV) complexes (4) and (8) lie in the range 2.47-2.54 BM. These values are less than spin-only value required for two unpaired electrons indicating spin-spin coupling in the solid state between unpaired electrons belonging to different VO(IV) ions in the same structural unit.48

The 1H NMR spectra of the diamagnetic complexes are recorded in DMSO-d6 medium. The complexes do not show any signal attributable to amino protons, suggesting that the proposed skeleton has been formed by the condensation reactions, which is also conformed from the IR spectra of the complexes. The disappearance of the signal due to the phenolic OH protons (which is normally observed at δ ~13.07 ppm) and the downfield signal (δ ~8.32 ppm) due to the azomethine protons as compared to free -CH=N (δ = 8.55 ppm) in the corresponding complexes, indicate the co-ordination of the phenolic oxygen (through deprotonation) and azomethine nitrogen to the metal ion.49 The same result was confirmed by the IR spectra. On the other hand the complexes (5), (6) and (7) show a complex broad multiplet in the region δ 6.51-7.63 ppm and a twin peak at δ 2.45, 2.72 ppm, corresponding to eight aromatic protons of two oxophenyl groups and imine methyl (CH3-C=N; 12H) protons50 respectively. But in case of complexes (1), (2) and (3) it is difficult to distinguish the eight aromatic protons of two oxophenyl groups and twenty aromatic protons of C6H5-C=N groups, as only one signal (multiplet) observed in the region δ 6.53- 8.06 ppm. For all the complexes, the signals due to (-NH-N=; 2H) protons appear at δ 5.98-6.12 ppm. Besides, an additional peak at δ ~3.6 ppm is observed in all the complexes indicating the presence of coordinated water.51 The representative spectrum of the [(UO2)2(omt)(NO3)2(H2O)2] complex is shown in Fig. 4.

Based on the foregoing observations the following tentative structures have been proposed for the present complexes (Figs. 5 and 6). 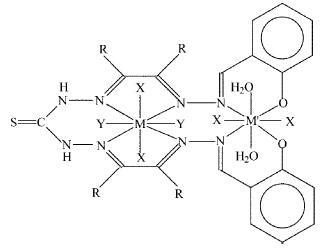 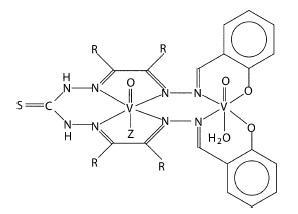