Solventometal carbonyl complexes seem to have their possible role in homogeneous catalysis. 1-3 Metal carbonyls of 18-electrons with η5- C5H5 react by an associative process via a pair of electrons localized on the ligand(Cp ring slippage) in the ligand substitution reaction.4

The displacement of coordinated THF from square planar platinum(II) complex shows that the enthalpies of the reaction are -26.4 kcal/mol for P(OEt)3 and -26.2 kcal/mol for PMe35(Eq. 1).

Another mechanistic study on the substitution reaction of M(CO)5(THF)(M=Cr,Mo,W) with PR3 (at least 10-fold excess of PR3) shows an associative process indicating the overall 2nd order kinetics and the activation parameters(△H≠= 40~80 kJ/ mol and △S≠=8~-122e.u.); however, there seems to be a gradual mechanistic changeover from a dissociative character toward an associative one along the series of Cr, Mo, and W.3

All operations were carried out under a nitrogen atmosphere by using standard Schlenk techniques or an Ar-filled glove box. Rigorous exclusion of trace moisture and oxygen degassed as described below. Infrared spectra were recorded on a Jasco FT-IR 460 spectrophotometer using 0.10-mm sealed CaF2 or KBr solution cells. 1H NMR spectra were previously obtained from Varian Gemini-200FT spectro meter in solutions of CDCl3, DMSO-d6, and CD3OD.7 The GC-MASS spectral data were previously collected from the GC-MASS(Hewlett Packard Model GC 5890).7 Photochemical reactions were performed by using a 450 watt Hg vapor lamp(Hanovia). THF were distilled under nitrogen from purple sodium/benzophenone ketyl. Hexane was stirred over concentrated H2SO4 overnight, washed with aqueous NaHCO3 and distilled from Na0/benzophenone ketyl. All other reagents purchased were reagent grade and used without further purification.

The preparation procedure of (η5-MeCp)Mn(CO)2-(THF) is similar to the method in the literature. A solution of (η5-MeCp)Mn(CO)3(0.05 g, 0.2 mmol) in freshly distilled THF(50 ml) is photoylzed for 10min with nitrogen purge. A slow, steady flow of N2 through the solution during photolysis assists in removing CO and prevents the reverse reaction.

Identification of (η5-MeCp)Mn(CO)2(PR3) (R =Me, OEt, C6H5). After each kinetic experiment was over, the respective reaction mixture solution was dried under vacuum to have the oily product. This reaction mixture was then on column chromatograph using hexane/THF mixed solvent system. Products such as (η5-MeCp)Mn(CO)2PR3 (R=Me,OEt,C6H5) were identified by the respective (CO) spectra as compared with those of the authentic compounds previously isolated and characterized in our laboratory(Table 1).7

Kinetic Measurements. The kinetic experiments were carried out in a dried 10 ml vial securely fitted with a rubber septum. In a typical kinetic experiment, 0.05mmol of (η5-MeCp)Mn(CO)2(THF) freshly prepared from the photochemical reaction of (η5-MeCp)Mn(CO)3 in THF at ambient temperature under N2, was loaded into a 10ml vial. The respective THF solution of triethylphosphite, triphenylphosphine, or trimethylphosphine of known concentration was added by a syringe. This solution was then stirred and placed in a water bath equipped with a constant-temperature controller(±0.1℃). Samples for IR spectral analysis were withdrawn periodically with a syringe and placed in a sealed 0.1 mm pathlength KBr or CaF2 infrared solution cell. Rates of reaction were observed by following the disappearance in absorbance of the reactant’s υ(CO)IR which does not overlap with the other carbonyl bands: (η5-MeCp)Mn(CO)2(THF) at 1845 cm-1. Under the psendo-first-order reaction conditions, rate constants were calculated using a linear least-squares program for the first order rate plots of [At-A∞] vs time, where At is the absorbance at time t and A∞ is the absorbance at time infinity.

It is widely accepted that the neutral metal carbonyl complex with Cp ligand is likely to undergo an associative ligand substitution with PR3 in case this complex is electronically saturated due to the Cp(η5→η3) ring slippage.4,8 In the substitution reaction of M(CO)5(THF)(M=Cr, Mo, W) with PR3 shows mainly an associative ligand substitution process.3 However, in this case, as compared with the variations of metal and the PR3 ligand, there appeared a wide range of △S≠(-122e.u.~+8e.u.), which may demonstrate some mechanistic change from associative character to a dissociative one to some degree. Here, the substitution reaction of (η5-MeCp)Mn(CO)2(THF) with PR3 shows the overall first order dependence with respect to the concentration of (η5-MeCp)Mn(CO)2(THF). The reaction rate was observed to have no linear relationship with the PR3 concentration (Table 2). 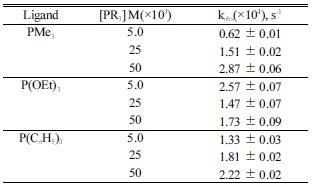 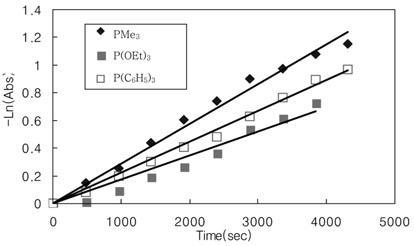 However, in case of PMe3, there may be a minor associative process to some degree in competition with the major dissociative one (Table 2).

The activation parameters were calculated from the Eyring Plot (Fig. 2). 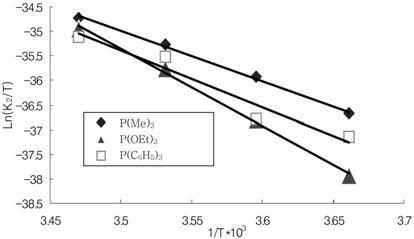 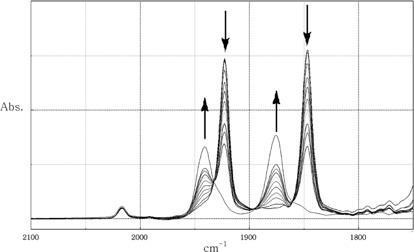 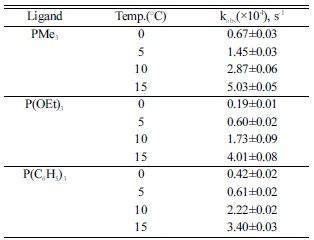 At the elevated temperature (30℃), it looks rather surprising that the kobs is more or less dependent upon the PR3 concentrations.

The relative σ-donating ability of PR3 seems to work definitely on the reaction rate at the elevated reaction temperature (30℃) toward the associative process. Table 4 shows that the reaction with the most nucleophilic PMe3 proceeds much faster than the one with less nucleophilic P(C6H5)3, followed by the one with least nucleophile, P(OEt)3 of the three. This change in reaction mechanism from the dissociative character toward associative one is assumed to be even clearer with far excess of [PR3] at the elevated temperature. Similar mechanistic changes in ligand substitution are observed elsewhere in the literatures.3,10 It seems reasonable that more nucleophilic PMe3 with high kinetic energy(at elevated temp.) is more likely to directly attack the Mn metal center without waiting for the THF to depart from the Mn metal complex. However, the steric hindrance(ligard cone angle) of PR3(106o for P(OEt)3; 118o for PMe3; 142o for P(C6H5)3) does not seem to be inversely proportional to the rate (Fig. 4 and Table 5).

Table 5.The relationship between steric factor of PR3 and the reaction rates in THF 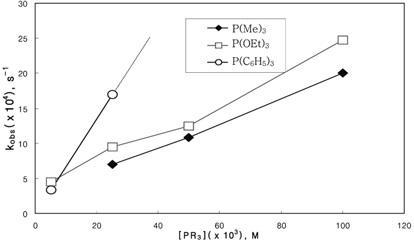 This reaction situation(associative ligand substitution) is assumed to be very similar to SN2 reaction where strong nucleophile readily attacks Cδ+- X prior to C-X bond cleavage, particularly at high concentration of the nucleophile and high reaction temperature as well. The entropy change of activation for PMe3(△S≠=2.3 e.u. ) being rather smaller than those of the other ligand(△S≠=11.64 e.u. for P(OEt)3; △S≠=10.52 e.u. for P(C6H5)3) may also support the possibility of the reaction pathway change(major dissociative process in competition with minor associative one for reaction involving PMe3). In this case, Scheme 1 is the major possible process, concurrently with Scheme 2(minor one).

At reasonably low reaction temperature (0℃~20℃), this ligand substitution on the whole follows the dissociative process(Scheme 1), which is evidenced by the activation parameters and the overall first order kinetic data; however, at elevated temperatures (≥30℃) where the kinetic energy is merely enough for the reactive PR3(R=Me, OEt, C6H5), chances are high for the associative ligand substitution to occur(Scheme 2A, or 2B). However, during the above-mentioned reaction no intermediate (η5-MeCp)Mn(CO)2, or (η3-MeCp) Mn(CO)2(THF)PR3 could be observed, based on the υ(CO)IR spectral changes vs reaction time (Fig. 3). Therefore, at elevated reaction temperature, the associative interchange(Ia) involving the plausible transition state(Scheme 2B) can also be proposed. More in-depth kinetic study on this reaction at elevated temperature should be done in near future. 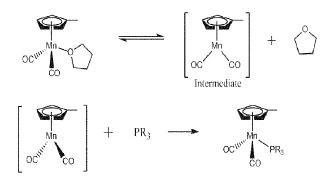 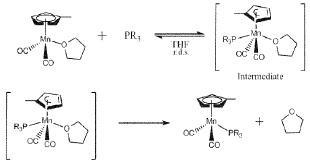 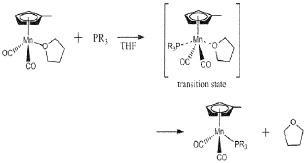