Effect of Electrolyte on the Shapes of Liesegang Rings 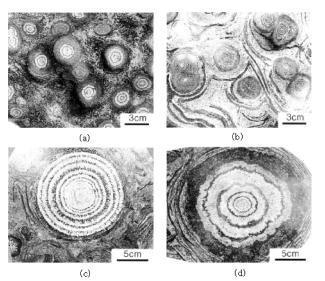 Orbicular structure is completed by alternate layers of dark and bright that converges to a center core which is composed of some minerals or of captures. This structure generates concentric circles or radial pattern which gives in a concentric sphere, which are the characteristics of most of the orbicular rocks. The structure is called orbicular rocks. Here, ‘the structure or precipitation form making multiple concentric circles’ is called a cyclic precipitation reaction, and is called an annual ring reaction or Liesegang ring.

The Liesegang rings are formed in the course of formation of spherulitic rhyolites. These rings can indicate the environmental and chemical conditions (e.g., the chemical components, temperature and concentration) on the days through the widths and gaps between two rings as well as color. Spherulitic rhyolites with the same color and shape often show the wide gaps between two rings and distinct and/or vague shapes of rings. This result has been rationalized as being due to differences in the internal electrolyte.3 However, the systematic studies of the formation of rings from a chemical point of view remain scarce. Our interest in the mechanistic study of ring formation has prompted us to investigate the effect of the internal electrolyte on the shape of Liesegang rings. This study aims to examine how the shape of insoluble salt Liesegang rings differs according to the concentration of internal electrolyte and temperature.

The principle of Liesegang rings, used to explain the formation of orbicular and spherulitic rocks, was reported first by Liesegang.4 In Liesegang’s experiment, if silver nitrate solution is dropped into the center of gelatin gel containing potassium dichromate, and a round silver dichromate layer forms by the diffusion of the silver nitrate solution; for the formation of this layer, the dichromate element moves from the outside of the layer to the inside. As a result, even if silver nitrate is diffused later, a layer without silver dichromate occurs and the silver dichromate in the outer layer again moves to the precipitated area. Lofgren also confirmed that such formation of radial spherulitic minerals by super cooling happens inside volcanic rocks.5 In addition, when the gel is cooled for 45 minutes, radial precipitation does not appear, instead, one concentric silver dichromate precipitate and a bright band is formed around. This result is due to the viscosity of the gel. As the viscosity of gel increases, only a precipitation front is formed and diffusion current is not. However, further 60 minutes’ cooling gives increased viscosity of the gel, leading to forming the annual ring shape in Liesegang rings as shown in Fig. 1. Several researchers recognized that such Liesegang rings are similar to orbicular structure observed in rocks.6,7,8

In the experiment on the formation of Liesegang rings, silver nitrate was used as the internal electrolyte. This followed the report that when heavy metal ions such as silver ions (Ag+) and lead ions (Pb2+) are contained in internal electrolyte they prevents fungal growth and enable long-term preservation and observation.9

Gelatin was used as the medium, and four types of insoluble salt with different solubility product constants were selected. The experiments were conducted at 30℃ by changing the concentration of internal electrolyte to 0.01 M and 0.02 M as listed in Table 1 and their results were shown in Fig. 2. (i) When silver and halogen ions were used as the internal electrolyte and external electrolytes, respectively, the largest and clearest Liesegang rings of AgCl were obtained. This result is attributed to the solubility of electrolytes: AgCl is more soluble than other silver halides. Therefore, the precipitation reaction in AgCl becomes slowed down, leading to much clearer and larger ring formation than in AgBr and in AgI. However, AgI with the smallest solubility product constant had the more elaborated shape of ring. (ii) When the temperature was remained constant at 30℃, the radii of Liesegang rings gradually increased as the concentration of electrolyte increases. 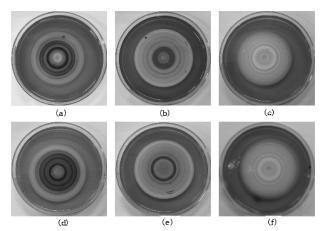 In order to understand how the shapes of Liesegang rings change according to temperature, we compared the shapes of Liesegang rings formed at 40℃ after controlling for the concentrations of internal and external electrolyte. According to the results of the experiment (see Fig. 3), under the same concentration, the speed of ring formation hardly changed despite the change in temperature. This is probably because the difference between 30℃ and 40℃ is small if converted to absolute temperature, so it did not cause a significant difference in speed. The shapes of Liesegang rings were less clear at 40℃ than at 30℃, but the rings grew larger and faster at 40℃ than at 30℃. This is understood: at high temperatures, the fluidity of gel is high and thus rings are formed fast but their shape is not maintained clearly. 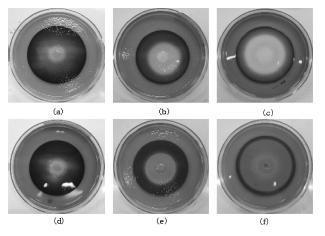 Table 2.Comparison of the radii of Liesegang rings at 30℃ 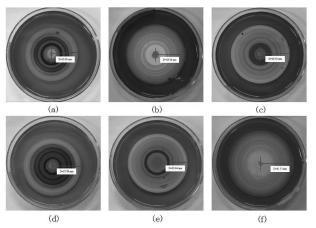 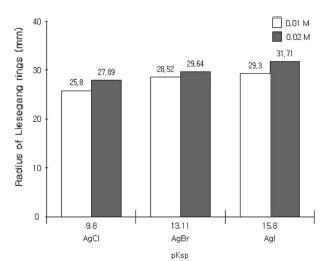 Fig. 6.Diagram showing the radii of Liesegang rings by changing the concentration of electrolyte at 30℃.

The results of our observations are as follows:

i) The Liesegang rings were larger at high electrolyte concentration. We believe that, at high concentrations, forming insoluble salt is larger and therefore external electrolyte diffuses more.

ii) Liesegang rings were clearer at 30℃ than at 40℃ but formed slightly more slowly. iii) When a large amount of external electrolyte was added all at once, the radii of rings were larger but there were fewer rings and their boundaries were unclear.

This study examined cyclic precipitation according to the type of insoluble salt and changes in the Liesegang phenomenon according to the temperature and the concentration of gel-state medium like gelatin. The results are relevant to annual ring reactions observed in rhyolites and other rocks in nature. In general, the color of annual ring in spherulitic rock is determined by the precipitation which is generated by the reaction of anion in internal electrolyte and cation in external electrolyte through the medium of magma. Therefore, the color of precipitation informs what precipitation is produced, and what heavy metal ion is included. For example, bright yellow color of the rocks represents AgBr or AgI precipitation in the rocks. Well-resolved annual ring provides a clear evidence of the outer environment that gives conditions for rock forming- low temperature with high concentrations of internal and external electrolytes.

Regarding the principle that gel cools inside volcanic rock and forms radial spherulitic rock, our results show that not only cooling rate and viscosity but also chemical substances contained in the gel and those intruding rocks from outside in the aspect of solubility product constant may affect this process. In addition, our results are relevant to the environment during cooling or the possibility of the inflow of chemical substances that can be inferred from the viscosity of magma or the color and state of rhyolites. The diffusion of two electrolytes is possible only when the gel-state medium is semisolid and does not flow, but is not too hard.