In biological science, L-ascorbic acid (VC) composes the oxidation reduction system, and can transport electrons and hydrogen of reversible reactions in the human metabolic system.1 Analytical techniques have been proposed for various fields.2-7, Such techniques depend on the separation system, the electric or magnetic acceleration system, and other photometric detection systems. In analytical science, voltammetric methods have long been recognized as sensitive and powerful trace analysis techniques, with relatively low-cost and simple working electrode techniques.8,9 Thus, various working electrodes have been developed to determine VC, as, for example, conventional mercury electrodes,10 platinum electrodes,11 nickel hexacyanoferrate (NiHCNF) film-modified aluminum electrodes,12 borondoped diamond electrodes,13 and polyviologen-modified glassy carbon electrodes.14 Moreover, various other methods have been developed. In this study, however, a new type of electrode was first prepared for the electric circuit of an infrared photo diode electrode (IPDE), which is commonly used in photometric sensing signals for infrared or visible waves and is inexpensive, simple to prepare, and requires no pre-treatment, making it simple to use for analysis. The IPDE surface is an electric photosensing surface. Various papers were reviewed to check on the IPDE’s cyclic voltammetric photo effect.15 Photo-sensitive surfaces depend on positive or negative doping systems,16,17 and their copolymer structure on metal surfaces have strong electron-donating properties.18 Many other papers were reviewed to check on the IPDE’s photo-sensing kinetic effect, electrical conductivity, redox potential, analytical measurements, and absorption experiments.19-25 Moreover, the IPDE’s doping complex is similar to that of chelate, and can thus be adjudged analytically usable. In this study, an IPDE was first applied to a working electrode system, after which the optimum cyclic peak potential of 50 mV VC26 was obtained. This result was applied to drinking water samples, which are applicable in microphoto diode arrays and can be applied to multisensing circuit systems.

The usable working electrode was prepared with a common IPDE, SPI5342-H, from the AUK Semiconductor Company. A sensing range of 430-1,050 nm with a peak-sensitive wavelength of 950 nm and packing view sizes of 4.8-5.5 mm were used as the TV and VCR remote audio control circuits. At the photo diode, both the forward and backward electrodes responded to the same results as those in the cyclic response and the anodic or cathodic reactions, wherein identical peaks were obtained. Initially, the transparent-covered glass was removed and the other base plates were excluded. Only two 0.7 cm-long bare-type electrodes with diameters of 1 mm were obtained, which were used as the working electrodes with no treatment and connected to a 0.5 mm-diameter copper lead wire with electrochemical systems. On the other hand, the glassy carbon electrodes were used with conventional electrodes (3 mm in diameter),27,28 and a carbon nanotube paste electrode was prepared using the common method.29-32

The three-electrode system was used in all the procedures, in which the three electrodes were immersed in a 15 mL cell that contained electrolyte solutions of 0.1M ammonium phosphate. Cyclic voltammetry (CV) was performed on a wide peak potential scan range of 1.0 to -1.0 V. As the working electrode was not cleaned for all the measurements, no treatment was required. All the experiments were performed at room temperature and without removing oxygen. The electrochemical systems were performed using a CH Instruments 660A analyzer (from CH Instruments, Inc., Cordova, TN, USA). A small IPDE that was 1 mm in diameter and 70 mm long served as the working electrode, whereas an Ag/AgCl electrode and a platinum wire served as the reference electrode and the auxiliary electrode, respectively. All the solutions were prepared from -18M ohm cm-1 double-distilled water. The standard stock solutions of the VC and the other interference ions were used for the standard stock atomic absorption solutions of 1,000 mgL-1 or Aldrich, and were diluted as required. A blank electrolyte solution was used with a 0.1M ammonium phosphate solution. The hydrogen ionic strength was adjusted to the desired values by adding either a 0.1M HCl solution or a 0.1M NaOH solution. 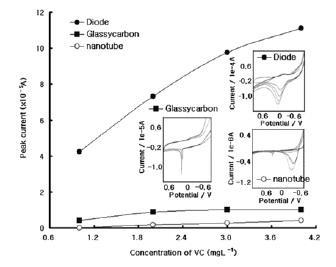 Fig. 1.Comparison of cyclic voltammetry for the IPDE, the glassy carbon and nanotube electrodes at 1-, 2-, 3- and 4 mgL-1 vitamin concentrations in a 0.1 M ammonium phosphate solution with a scan rate of 0.3 Vs-1

In this study, the various common electrodes were compared with the IPDE (1 mm in diameter and 0.7 centimeters long), the glassy carbon electrode (3 mm in diameter), and the nanotube paste electrode (0.3 mm in diameter and 1 centimeter long: carbon nanotube, 80% and mineral oil, 20%) in a fixed low VC concentration. For the peak potential, all the experiments were carried out in identical conditions of blank, 1-, 2-, 3-, and 4 mgL-1 VC additions, at a scan rate of 0.3 Vs-1. The results, presented in Fig. 1, show a sensitive peak current for the IPDE, with the oxidation peak appearing in 50 mV potentials.26,34 Fig. 2(B) shows, however, a peak potential of 300 mV for the pH 2.0 solution,33 the same peak potential as those of the nanotube and glassy carbon electrodes. The nanotube and glassy carbon electrodes appeared in the 300-400 mV range,14,11,33 and the electrode hardly indicated an increasing peak current. Moreover, the glassy carbon electrode did not clearly peak current. In the 4 ppm addition, the peak of the IPDE, glassy carbon, and carbon nanotube electrodes were 11.11×10-5 A, 1.01×10-5 A, and 0.42×10-5 A, respectively. The IPDE was 10 -times more sensitive than the other electrodes, followed by the glassy carbon and nanotube electrodes, in that order, whereas the IPDE’s peak width appeared broadly. Thus, all the other experiments were performed using the IPDE, and the optimum conditions were determined. At the cyclic scan, the cathodic peak was not obtained in any condition, and only the oxidation peak appeared.

At the optimized conditions, various scan rates were investigated from 0.1 to 4 V/s of 10 points. Fig. 2(A) shows that their peak currents continued to increase in the anodic and cathodic scans; and when the reverse appeared, the oxidation peak further increased, whereas the peak width appeared sharply at 0.3 V/s. Thus, the 0.3 V/s scan rate was used for all the other experiments. The reduction peak increased from 0.1×10-6 to 0.4×10-6 A, showing that the IPDE is not usable for applications and weak signals. Under this condition, the electro-lyte’s hydrogen ionic strength was examined using 0.1 H-HCl and 0.1 H-NaOH additions. The results are shown in Fig. 2(B). Their variation range of pH 2.9 to pH 7.7 was changed along the nine points, and two peaks appeared with 0.8V (small-peak) and 0.4 V (big-current) peak potentials at pH 2.9, whereas the 0.4 V was sensitive.33 At higher pH ranges, the 0.8 V peak current was bigger than the 0.4 V peak current, and the 0.4 V peak slowly decreased and moved towards the 0.2V peak before it disappeared. The pH value of 2.9 was used for all the other experiments. The IPDE had a solid surface and its chemical property was stable, whereas the CV reproducibility was measured using fixed conditions with a 0.1mgL-1 addition for n=16. Fig. 2(C) shows the resulting voltammograms and linear curves. The initial seven points oscillated more sensitively, whereas points 7-16 were linearly stable. At the higher numbers, the same results were obtained. Thus, at all times, the first-made IPDE was stabilized using 10 cyclic scans in a blank solution. At this state, analytical interference ions were examined by adding several other metal and vitamin analogy ions to the solution that contained 0.1 mgL-1 VC, and 10-hold additions of 1mgL-1 Ba, Cr, Co, Hg, Ge, Bi, Cd, vitamin B6, vitamin B12, vitamin B1, and vitamin B2 ions were obtained with 10.10%, 33.32%, 46.55%, 10.52%, -23.71%, -11.94%, 10.07%, 7.88%, 14.40%, -5.16%, and 34.34% peak highs. For the analytical application, these interferinterference effects were corrected with standard addition methods.

At the optimized conditions, various analytical working ranges were examined. Fig. 3(A) shows the results of the milligram range of 0-4 mgL-1 VC at nine points. The slope sensitivity was Δx/Δy=4.2422, the current intercept was 5.8957 (Y axis), and the precision was R2=0.989. These results are usable at the ppm level, whereas more sensitive working ranges were examined at the microgram level of 0-0.7 ugL-1 VC with eight points, for which a slope sensitivity Δx/Δy=5.5344+2.264 and a statistical precision of R2=0.9898 were obtained, and the peak width sharply appeared. These two working ranges are usable for commercial water and other applications. At this state, the relative standard deviation (RSD) was 0.169, with n=15 repeats for the 0.1 mgL-1 VC addition. Finally, the analytical detection limit was examined on a signal-to-noise (S/N=3) basis at the optimum conditions, and was estimated at 0.6 ugL-1 VC. As it was very sensitive, the analytical applications were performed using commercial drinking water for the known content of 700 mgL-1 VC with a 100 mL solution for L Company in Korea, and were used to test the standard addition method. The results are shown in Fig. 3(C). The first peak was for the 10 mL 0.1M ammonium phosphate solution; the next peak, for the 1 mL sample addition; and the last peak, for the 1-, 2-, and 3 mgL-1 standard VC additions, at a scan rate of 0.3 V/s. These peaks continuously increased at the same potentials. The other experimental parameters used were the same as those in Fig. 2. The method yielded 69 mgL-1 of the 10mL sample under optimal conditions, with a 98 % (n=5) recovery for the samples. At these results, the IPDE method is considered more advantageous because its analytical equipment is very simple and inexpensive, and because its experimental time consumption is conveniently short. Moreover, the IPDE method is relatively simpler, as it does not require pre-treatment. The method can be used for array-type electrodes in the future.

The voltammetric assay of the IPDE to determine vitamin C can be optimized first by using it as a viable and sensitive method in the presence of biological applications in water samples. Using the IPDE method, the detection limit was attained at 0.06 ppb, which shows that it is more sensitive than other methods (450 ppb, 0.4 uM, 0.38 uM, 30 ppb, and 0.2 mg/100 g).35,26,14,34,36 It can be applied in other commercial circuits of diode arrays, and can be used in other fields to assay biological materials, blood, food, and drugs, as well as to analyze vitamins.