Anaerobic Digestion of Napiergrass Stem: the Effect of Exogenous Iron and Nickel

Napiergrass, Pennisetum purpureum, is one of the most important energy crops producing high herbage yield per unit area of land.5 Napiergrass is a tall, predominantly vegetative-propagated, perennial indigenous to sub-Saharan Africa, which can produce biomass of 20~30 tons per hectare per year.6 Methane production potential of napiergrass via anaerobic digestion is documented.7 The production of methane via anaerobic digestion of napiergrass, like other biomethanation processes, is a complex group of biochemical reactions, which rely on the interaction of different groups of microorganisms and enzymes. Various factors affect these biochemical reactions, microbial interactions and enzymic activities. These factors, which have profound impact on methane yield, include type of inoculum, pH and temperature of substrate, carbon - nitrogen ratio of substrate, volatile fatty acid content of substrate, pretreatment of substrate, presence of salts, and trace metals ions, etc..7-14

All the chemicals used in the study were analytical grade, purchased from Merck (Darmstadt, Germany), and used without further purification.

The stems of the 6 month old napiergrass used in this study were obtained in October 2007 from a private farm in Benin City, Nigeria. The napiergrass stems were taken to the laboratory and chopped to approximately 3 cm particle size. The chopped samples were dried at room temperature to a constant weight and ground in a Wiley mill to pass through a 1 mm screen. The ground sample was frozen and stored at -20 ℃. Before analyses and anaerobic digestion experiments, the samples were allowed to thaw overnight at 4 ℃.

A 20 g of the ground sample and 4 g of sodium hydroxide pellet were put into a 250 mL conical flask. Deionised water was then introduced into the flask until the sample was submerged. The slurry was thoroughly stirred with a magnetic stirrer at 250 rpm to ensure complete dissolution of sodium hydroxide pellet. The conical flask containing the slurry was corked and left to stand for 24 h in a water bath maintained at 35 ℃. At the end of the pre-treatment process, 40 mL of 2.5 M hydrogen chloride acid was added to bring the pH of the slurry to 7.0. The neutralized slurry was further stirred and left to stand for another 24 h at room temperature before the anaerobic digestion experiment; after which the slurry was filtered and then air-dried to obtain the substrate.

The inoculum used for the anaerobic digestion of substrate was obtained from rumen compartment of a freshly slaughtered 5 year old male bovine that weighed 178 kg. The bovine, which was maintained on a steady meal of napiergrass and groundnut residue for 3 months, was slaughtered at the Edo State Abattoir, Ikpoba, Benin City, Nigeria. A 40 mL of the rumen fluid was filtered through a glass wool into conical flask and 30 mL of 1:4 potassium dihydrogen phosphate/potassium bicarbonate buffered solution of pH 7.2 was added. The buffered inoculum was stirred and incubated at 37±1 ℃ until digestion experiment.

The digestion of the substrate was carried out in a laboratory-scale batch experiments. The digestion experiments were conducted in duplicate in a 500 mL glass bottles on a shaking water bath (70 rpm) at 37±1 ℃. A 50 mL of the inoculum and 0.5 g of the substrate were added to the bottles. 0.1 g FeCl3 was added to the content in the bottle. The experiment was also carried out with different masses (0.2 g, 0.3 g, and 0.4 g, respectively) of FeCl3. The contents of the bottles were flushed with N2/CO2 gas mixture for 10 minutes and the bottles sealed with rubber stoppers. The bottles were connected to a calibrated wet gas meter to collect biogas produced. The methane content of the biogas was measured for 30 days by 2 days intervals. The digestion was also carried out with different masses (0.1, 0.2, 0.3, and 0.4 g) of NiCl2, and 1:1 molar mixture of FeCl3 and NiCl2. The digestion experiment was also carried on a substrate without added trace metal salts, which served as control. Assay with inoculum only was carried to minus the methane yield of inoculum from that of the substrate.

Biogas samples were taken with a pressure lock syringe and their methane content was measured with gas chromatography (Perkin Elmer Model Clarus 500). The GC was equipped with a flame-ionisation detector and 30 m × 0.53 mm Perkin Elmer alumina column. The carrier gas was argon and its flow rate was 0.8 mL min-1, oven temperature was 100 ℃, injection port temperature was 250 ℃ and detector temperature was 225 ℃. The methane yield of substrate was calculated as m3 CH4 kg-1 VSadded minus the methane yield of the inoculum.

Volatile fatty acids (VFAs) were measured with a GC (Perkin Elmer Autosystem XL) equipped with flame-ionisation detector. The GC’s column was 30 m × 0.32 mm × 25 μm PE FEAP column, carrier gas was helium and its flow rate was 0.8 mL min-1, injection port and detector temperature were 225 ℃, while the oven temperature was 100~160 ℃ (20 ℃/min). Total solids and volatile solids were determined according to the Standard Methods17 and Metrohm 774 pH-meter was used in pH measurement. pH of sample was measured from slurry of substrate and deionised water. Carbon and nitrogen were analyzed with elemental analyzer (CHN2400, Perkin-Elmer, Wellesley, MA, USA). Crude fats, crude fiber and carbohydrates were determined according to the Standard Methods.18 The results of the chemical characteristics of napiergrass stem are given in Table 1. 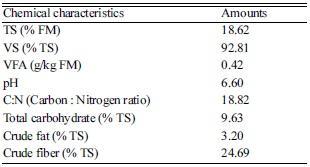 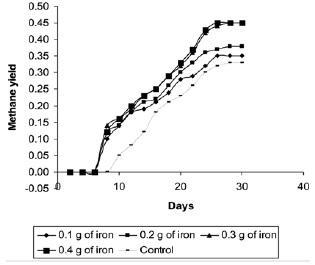 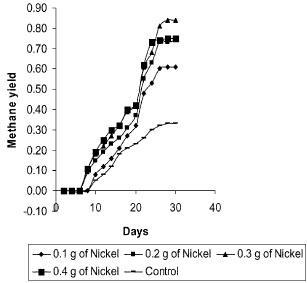 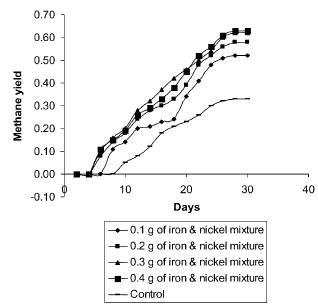 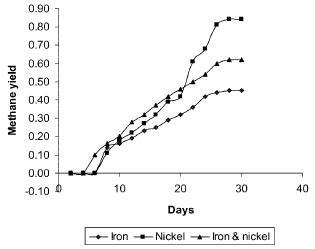