Minerals are classified into two main groups: macro elements (>100 mg/day) and micro elements (<100 mg/day). Some of the macro elements are calcium, phosphorus, sodium, potasium, chlorine (as chloride), magnesium and sulphur.1,2 Magnesium is an essential element that is required for the catalytic activity of numerous metalloenzymes and serves a structural role by stabilizing the conformation of certain metal dependent protein domains, such as calcium-binding proteins and receptors. It participates in all reactions involving the formation and utilization of ATP and thus has a critical role in the transfer, storage and utilization of energy within the body. Magnesium is also required for protein and nucleic acid synthesis and for a number of mitochondrial reactions.2 Magnesium deficiencies can have devastating effects leading to muscle paresis and seizures. Moreover, magnesium depletion has been implicated in a variety of vascular diseases ranging from hypertension and cardiac arrhythmias to asthma and migraines.3 The important micro elements essential for normal body functions are iron, copper, iodine, fluorine, zinc, cobalt, manganese, chromium, molybdenum, selenium etc. Cobalt occurs in small amount in all tissues, higher concentrations occurring in liver and kidneys. Most of the cobalt is present in vitamin B12, which is necessary for red blood cells maturation.1,2

Human growth hormone, hGH, as a single domain globular protein containing 191 amino acids, plays an important role in somatic growth through its effects on the metabolism of proteins, carbohydrates, and lipids. hGH is produced recombinantly and is available worldwide for clinical use. It has limited stability in solution. Development has therefore focused on more stable and understanding on its interaction with ligands. The interaction of hGH with some of divalent metal ions (Ca2+ and Cu2+) in aqueous solution was studied using different techniques. The binding isotherm for hGH-metal ion was obtained by two techniques of potentiometric, using a metal-selective membrane electrode, and isothermal titration calorimetry. The circular dichroism spectroscopy study on the protein upon interaction with Cu2+ does not show any changes on the secondary structure of hGH. However, the stability of the protein decreases due to the binding of copper ions. The importance of metal ions such as Zn2+ and Cd 2+ in determining the stability of proteins is widely reported.4-11 Calcium ions binding increase the protein thermal stability by increasing of the alpha helix content as well as decreasing of both beta and random coil structures. Reports have shown that some metal ions like Zn2+, Cd2+, Hg2+ and Co2+ are known to promote hGH reversible dimerization.12,10 But in the presence of some other ions like Ca2+, Ba2+, Mg2+, Pb2+, Al2+, Fe2+ and Fe3+, there is no significant dimerization of hGH in solutions.13,10 In this paper, the interaction between two different classes of minerals Mg2+ (macro element) and Co2+ (micro element) ions and hGH was studied at 27 ℃ in NaCl solution using the isothermal titration calorimetry. The solvation parameters recovered from the high performance solvation theory were attributed to the structural change of hGH and its biological activity.

Highly purified preparations of hGH were provided by the National Research Center of Genetic Engineering and Biotechnology (NRCGEB), Tehran, Iran. Protein concentrations were determined from absorbance measurements at 277 nm in 1 cm quartz cuvettes. All other materials and reagents were of analytical grade, and solutions were made in 50 mM NaCl using double-distilled water.

The isothermal titration microcalorimetric experiments were performed with the four channel commercial microcalorimetric system, Thermal Activity Monitor 2277, Thermometric, Sweden. The titration vessel was made from stainless steel. The metal nitrate solutions [2 mM Mg(NO3)2 and 30 mM Co(NO3)2] was injected by use of a Hamilton syringe into the calorimetric titration vessel, which contained 1.8 mL hGH (35 μM hGH+2 mM Mg(NO3)2 and 60 μM hGH+30 mM Co(NO3)2). Thin (0.15 mm inner diameter) stainless steel hypodermic needles, permanently fixed to the syringe, reached directly into the calorimetric vessel. Injection of metal nitrate solutions into the perfusion vessel was repeated 30 times, with 20 μL per injection. The calorimetric signal was measured by a digital voltmeter that was part of a computerized recording system. The heat of each injection was calculated by the ‘‘Thermometric Digitam 3’’ software program. The heats of dilution of the metal ions solution were measured as described above except hGH was excluded. The microcalorimeter was frequently calibrated electrically during the course of the study. The molecular weight of hGH was taken to be 22 kDa. The heats of metal ions binding (raw data) with hGH are shown against the metal ion concentrations in Fig. 1. 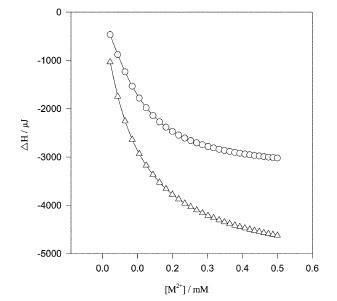 Fig. 1.The heat of Magnesium (O) and Cobalt ions (△) binding with hGH for 30 automatic cumulative injections, each of 20 μl, 2mM of the cations solutions, into sample cell containing 1.8 ml 35 μM hGH solution vs. total concentration of M+2 ions (Magnesium or Cobalt ions).

We have shown previously14-24 that the enthalpies of the ligand+hGH interactions in the aqueous solvent (M2++water in the present case) system, can be calculated via the following equation:

[M2+] is the total concentration of metal ions and [M2+]max is the maximum concentration of the M2+ upon saturation of all hGH. In general, there will be "g" sites for binding of M2+ per hGH molecule and ν is defined as the average moles of bound M2+ per mole of total hGH. LA and LB are the relative contributions due to the fractions of unbounded and bounded metal ions in the enthalpies of dilution in the absence of hGH and can be calculated from the enthalpies of dilution of M2+ in buffer, ΔHdilut, as follow:

The enthalpies of M2++hGH interactions, ΔH, were fitted to Eq. 1 across the whole M2+ compositions. In the procedure the only adjustable parameter (p) was changed until the best agreement between the experimental and calculated data was approached. parameters have been also optimized to fit the data. The optimized values are recovered from the coefficients of the second and third terms of Eq. 1. The small relative standard coefficient errors and the high r2 values (0.99999) support the method. The agreement between the calculated and experimental results (Figs. 2 and 3) is striking, and gives considerable support to the use of Eq. 1.

Փ is the fraction of hGH molecule undergoing complexation with M2+ ions which can be expressed as follow:

The appearance association equilibrium constant values, Ka, as a function of M2+ concentration can be calculated as follow: 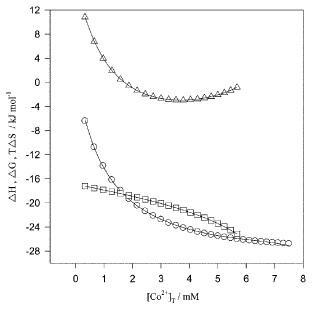 Fig. 2.Comparison between the experimental H (O), G ( □ ) and TS values (△) for hGH+ Co2+ interactions, and their calculated data (lines) via Eqs. 1 and 7. [Co2+]T is the total concentration of Co2+ in mM. As it is clear, the Co2+- induced structural changes of hGH in the enthalpies and entropies of interactions, have canceled each other exactly in the free energies of interaction. The compensation of the structural change in the free energy is another support for Eqs. 1 and 7. 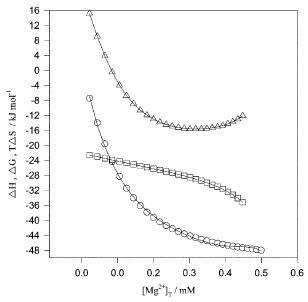 Fig. 3.Comparison between the experimental H (O), G (□ ) and TS values (△) for hGH+ Mg2+ interactions, and their calculated data (lines) via Eqs. 1 and 7. [Mg2+]T is the total concentration of Mg2+ in mM. As it is clear, the Mg2+- induced structural changes of hGH in the enthalpies and entropies of interactions, have canceled each other exactly in the free energies of interaction. The compensation of the structural change in the free energy is another support for Eqs. 1 and 7.

Ka values obtained from Eq. 6, have been fitted to Eq. 7 using a computer program for nonlinear leastsquare fitting. Therefore, we can approach to "g" value and the macroscopic association equilibrium constants in the first, K1, the second, K2, and the third, K2, binding site, which are corresponded to ν=1, ν=2 and ν=3 respectively. ν values can be calculated at any concentration of M2+ via Eq. 2. The binding parameters obtained form this method are listed in the Table 1. The Gibbs energies as a function of M2+ concentrations can be obtained as follow:

Previous investigations have shown that metalbinding site in hGH is located in the hydrophobic core and likely composed of His18 and His21 on helix I and Glu174 on helix IV. For example Zinc binding to residues 18 and 174 of hGH confines the articulation of helices 1 and 4 and stabilizes hGH structure.10 It is possible to introduce a correlation between change in and increase in the stability of proteins. The value reflects the hydrophobic property of hGH, leading to the enhancement of water structure. The greater the extent of this enhancement, the greater the stabilization of the hGH structure and the greater the value of . value (Table 1) for hGH+M2+interactions are small and positive (Table 1), indicating that in the low concentration of the metal ions the hGH structure is stabilized, resulting in an increase in its biological activity. The previously reported results indicates that the inclusion of a divalent metal ion such as zinc, cobalt or copper, preferably zinc, into an hGH formulation results in the formation of stable zinchGH dimers that exhibit unexpected stability to denaturation and maintain the activity of hGH long periods at temperatures up to and beyond 37 ℃.25 The positive values of indicate that Co2+ ions stabilize hGH srtucture (Table 1), which is in agreement with the formation of stable cobalt-hGH dimers. The Co2+-hGH dimer is significantly more stable to denaturation than monomeric hGH. The analyses via Eq. 1 indicates no denaturation of hGH due to interaction with Co2+ ions which is consistent with the formation of (Co2+-hGH)2 complex.

Table 1.Binding parameters for hGH + Co2+ and hGH + Mg2+ interactions via Eqs. 1 and 7. p> 1 indicates that there is positive cooperativity which is in agreement with K3>K2>K1 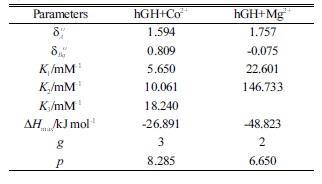 Our results have very good agreement with previous studies that represented calcium ions binding increase the hGH thermal stability by increasing of the alpha helix content as well as decreasing of both beta and random coil structures. Other investigations with Differential scanning calorimetry (DSC) revealed that interaction of three iron ions with hGH prevent irreversibility and aggregation by an effect on the hydrophobicity and there are at least two main transitions corresponding with the two groups of helices.10

p values are more than one (p=8.582 and p= 6.655), indicating that there are a set of three identical binding sites for hGH+Co2+ with positive cooperativity and a set of two identical binding sites for hGH+Mg2+ with positive cooperativity. We will arrive to the same conclusion via Eq. 7 because the macroscopic association equilibrium constants recovered from this equation are increased from K1 to K3 (Table 1). We can calculate all thermodynamic functions, cooperativity parameters, equilibrium constants and stability prediction as a result of ligand interaction with a biopolymer, just using Eqs. 1 and 7 and it is a revolution in the ligand + macromolecule interactions.