Levofloxacin hemihydrate (LFX) (Fig. 1A) chemically, [(-)(s)-9-fluro-2,3-dihydro-3-methyl-10-(4-methyl-1-piperazinyl-7-oxo-7H-pyrido[1,2,3-de]-1,4-benzoxazine-6-carboxylic acid is an optically L-isomer of ofloxacin.1 It is a broad spectrum fluoroquinolone class of antibacterial agent and effective against many gram positive and gram negative bacteria.2,3 It is a potent inhibitor of bacterial DNA gyrase enzyme (topoisomerase II & IV), which is necessary for negative supercoiling of DNA prior to replication.4

Ambroxol hydrochloride (ABX) (Fig. 1B) chemically, 4-[(2-amino-3,5-dibromophenyl)-methyl]-amino] cyclohexanol hydrochloride is a mucolytic expectorant and used to reduce the viscosity of mucous secretions.5

A fixed dose combination of levofloxacin hemihydrate (LFX) and ambroxol hydrochloride (ABX) is available for the treatment of upper and lower respiratory tract infections.

Literature survey reveals that several methods have been developed for the quantitative determination of LFX in formulations as well as in plasma and urine. These include capillary electrophoresis and UV spectrophotometry,6 HPLC,7-10 simultaneous HPTLC method with ornidazole11 and flow injection analysis.12

This work was aimed to investigate the utility of UV spectrophotometric method in the simultaneous determination of LFX and ABX in pharmaceutical preparations. The method had sufficiently good accuracy, precision and permitted a simple and cost effective assay for these compounds in mixtures.

LFX and ABX, both are freely soluble in water, hence double distilled water was chosen as a solvent for their determination in solid dosage forms. The UV spectra of standard solutions of LFX and ABX (10 μg/mL each) were determined separately in distilled water (Fig. 2A and 2B). The λmax of LFX was found to be 287 nm whereas the λmax of ABX was recorded at 245 nm.

The developed method for the simultaneous analysis of LFX and ABX was validated with respect to stability, linearity, sensitivity, precision, accuracy, specificity, robustness and ruggedness.30-33

The stability of both the drugs in distilled water was checked by recording their UV spectra at an appropriate time interval for up to 36 hours. They were compared with freshly prepared solutions and not any difference was found between them. This indicated that both these drugs were highly stable in solution phase. Further, a UV spectrum of standard solution containing LFX and ABX (mixture) was also recorded to check any chemical interaction between these drugs. The λmax of both the drugs in a mixture was found to be similar as compared to individual drugs indicating no chemical interference with each other (Fig. 2C). 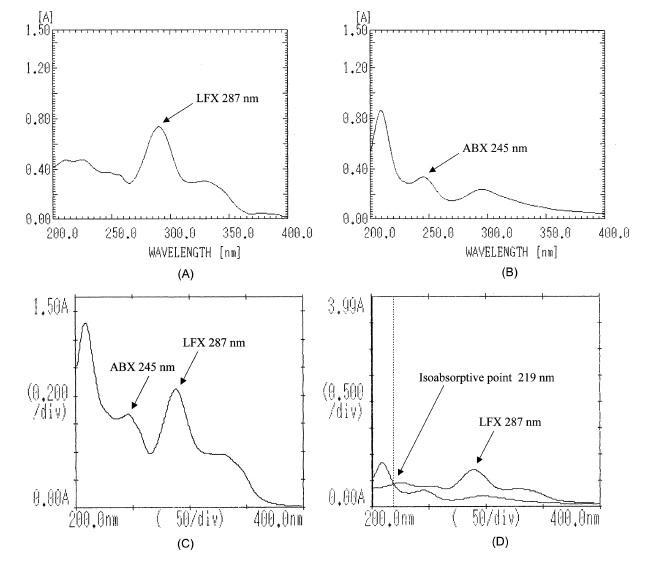 The ratio of two absorbance determined on the two solutions at two different wavelengths is constant. This constant is termed as Q value. The Q value is independent of concentration and thickness of solution and therefore is used to access the purity of compounds. The absorbance ratio method is a modification of the simultaneous equation procedure. Graphical absorption ratio method uses the ratio of observed absorbance at two selected wavelengths, one of which is isoabsorptive point. It depends on property for that substance which obeys Beer’s law at all wavelengths. The ratio of absorbance at any wavelength is constant value independent of concentration or path length.

For Q analysis method, the overlain spectra of LFX and ABX were recorded in the range of 400 to 200 nm. It showed that (Fig. 2D) the peaks were well resolved, satisfying the criteria for obtaining maximum precision, based on absorbance ratios.34 The criteria being the ratios, (A2/A1)/(ax2/ax1) and (ay2/ay1)/(A2/A1), should lie outside the range 0.1-2.0 for the precise determination of X (LFX) and Y (ABX), respectively. Where A1, A2 represents the absorbance of the mixture at λ1 (wavelength at isoabsorptive point) and λ2 (λmax of LFX), ax1 and ax2 denote absorptivities of X at λ1 and λ2, and ay1 and ay2 denote absorptivities of Y at λ1 and λ2, respectively. In the present work, the above criteria was found to be satisfied for LFX (X) and ABX (Y), where λ1 was 219 nm and λ2 287 nm for Q-absorbance method.

In the quantitative assay of LFX and ABX in an admixture by absorbance ratio method, absorbances were measured at any two wavelengths, one being iso-absorptive point (λ1) and the other being λmax of one of the component i.e. LFX (λ2). Two equations were constructed as described below (Eq. 1 and Eq. 2), using the relationship ax1= ay1 at λ1 and b= 1 cm. Equations are

Dividing each term by CX+CY and let FX = CX / (CX+CY) and FY = CY/(CX + CY) where, FX and FY are the fractions of X and Y respectively in the mixture of LFX and ABX.

Eq. (3) gives the fraction of X in the mixture of LFX and ABX. For the determination of absolute concentration of X and Y the equation 5 was rearranged.

Where, CX and CY are concentrations of LFX and ABX, respectively.34

In quantitative analysis the calibration curve was constructed for both LFX and ABX after analysis of consecutively increased concentrations. To check the precision and reproducibility of the method, six samples of the same concentration (n=6) of LFX and ABX were prepared and analysed. The low % RSD values obtained for LFX (0.83) and ABX (0.29) indicated that the method had high precision and reproducibility. The regression equation, slope, intercept, correlation coefficient, precision and linearity range are given in Table 1.

For the determination of LFX and ABX from pharmaceutical tablet formulations by Q analysis method, the absorbance of sample solutions and absorptivity values at the particular wavelengths were calculated and substituted in the following equation (equations 4 and 5) to obtain the concentrations of two components.

Limit of detection (LOD) and limit of quantification (LOQ)

Limit of detection (LOD) and limit of quantification (LOQ) decide about the sensitivity of the method. LOD is the lowest detectable concentration of the analyte by the method while LOQ is the minimum quantifiable concentration. LOD and LOQ of LFX and ABX were calculated according to the equations 6 and 7 respectively at both the λmax where, δ is the standard deviation of blank and s is slope of calibration.35

The accuracy and specificity of the proposed method was tested by recovery experiments. Recovery studies were carried out at 100 % level by adding a known quantity of pure drug to the preanalyzed formulation and the proposed method was followed. From the amount of drug found, percentage recovery was calculated (Table 4). The % recovery for LFX and ABX were found to be in the range of 100.53-101% (% RSD 0.51-1.51) and 99.69-101.84% (% RSD 0.49-0.76) respectively for both the formulations tested. The high recovery rate with low % RSD values indicated that the method had a good accuracy and specificity, as there was no interference from the excipients present in formulations.

Intra-day precision and accuracy were evaluated by analyzing three samples of two different concentrations, prepared on same day. Inter-day variability was assessed by analyzing two concentrations on three different days, over a period of one week. No significant difference was found in these experiments, indicating accuracy and reproducibility of the assays. The % RSD values reported in Table 5 shows that proposed method provides acceptable intra-day and inter-day variation of LFX and ABX.

Ruggedness of the proposed methods was determined by analyzing LFX and ABX by different analysts, using similar operational and environmental conditions; the % RSD values are reported in Table 5 and found to be less than 2 %.

A Shimadzu 1700 UV (Shimadzu, Japan) spectrophotometer with 1 cm matched quartz cells was used for the estimation.

LFX and ABX were kindly supplied by Cipla Ltd., Mumbai, India, as gift samples. Tablets containing LFX and ABX were procured from local pharmacy. All the reagents were of analytical grade. Double distilled water was used throughout the experiment.

For the estimation of drugs from the commercial formulations, twenty tablets of two brands L-cin A (Lupin Ltd., Mumbai, India) and Mucosyn (Alembic Ltd., Vadodara, India) containing 500 mg of LFX and 75 mg of ABX were weighed, and finely powdered. For the analysis of drugs, a standard addition method was used. An accurately weighed 175 mg of pure ABX was added to finely powdered samples to bring the concentration of ABX in linearity range. With this addition, the ratio of LFX to ABX in samples was brought to 2:1. Quantity of powder equivalent to 20 mg of LFX and 10 mg of ABX was transferred to 100 ml volumetric flask, dissolved in sufficient quantity of distilled water, sonicated and the volume was adjusted up to the mark with distilled water to obtain a stock solution of 200 μg/ml of LFX and 100 μg/ml of ABX. The solution was then filtered through Whatman filter paper No. 41 and the filtrate was appropriately diluted to obtain final concentrations 10 μg/ml of LFX and 5 μg/ml of ABX. Absorbance of this solution was measured at appropriate wavelengths, and values were substituted in the respective formulae to obtain concentrations.