Stability of the Zwitterionic form of 4-aminopyrimidine HCl and -HBr Complexes: Computational Study

We present calculations for the 4-aminopyrimidine (4AP) – HCl and –HBr complexes. We predict that the charge separated (zwitterionic) form [4AP] is not stable, but that [4AP] is stable enough for experimental detection in gas phase at low temperatures. The latter observation is attributed to smaller dissociation energy of HBr compared with HCl, and to “solvation” of HBr by the amino group in 4AP.

Proton transfer from acid to base is an important process in many fields of chemistry. The tendency to accept or donate proton is a key property of molecules, especially in biochemical and physiological processes. The acidity and basicity are usually measured in the solution phase, whose strengths depend on the intrinsic structure of the substance as well as on the interactions with solvent. Recent development of gas phase experimental technique and quantum chemical methods now allow systematic investigation for elucidating the macroscopically measured acidity and basicity in terms of the molecular structure. The influence of solvent may also be effectively examined by studying the properties of microsolvated molecules.1-9

Interactions between acidic and basic substances in gas phase are very different from those in the solution phase. For example, the NH3 and HCl molecules interact as neutral forms (NH3… HCl) in the gas phase in the absence of solvent, whereas only the ion pair (zwitterion) (NH4+…Cl+) is observed in aqueous solution. This situation is quite analogous to the equilibrium of the canonical and zwitterionic forms of amino acids. The key question there is: How many water molecules may yield stable zwitterionic form of amino acids? Recent photoelectron experiments on the glycine – (H2O)n have revealed that five water molecules would be needed.10 Numerous studies have also been carried out to understand the role of solvent in the intermolecular proton transfer processes in the acid – base reactions, and it is now agreed that a single water molecule may render stability to the ion pair relative to the neutral form for ammonia – HCl complex11-13 Recognizing that structural property, such as the partial charge or the proton affinity of the basic functional groups in the molecule, may well be correlated with the stability of the acid – base ion pair, a weaker base would need more water molecules to receive a proton from a given acid. While this role of solvent is very important, however, there may exist some instances in which only the peculiar structural properties of acid or base may yield stability of the ion pair form relative to the neutral complex. For example, we may ask: can the combined synergetic interactions among the functional groups in the molecule produce stable acid – base ion pair? Molecules with multiple acidic or basic functional groups may be good candidates for addressing this intriguing question, because these functional group may interact in a complicated way through the bridged and/or multiple hydrogen bonding.

In this work, we examine the structures of the 4-aminopyrimidine (4AP) – HCl and – HBr complexes, focusing on whether the presence of multiple basic sites in 4AP could result in thermodynamically stable ion pair without the assistance of solvent. We predict that the 4APH+ – Cl‒ ion pair is not stable (thermodynamically and kinetically), but that 4APH+ – Cl‒ is stable enough to be observed in gas phase at low temperatures. We attribute this interesting property to combined interactions of the two basic sites of 4AP with HBr, with the amino group acting as an “intramolecular solvent” to Br‒.

We employ the density functional theory (B3LYP)14,15 with 6-311++G** basis set, as implemented in GAUSSIAN 03.16 Stationary structures are confirmed by ascertaining that all the harmonic frequencies are real. Zero point energies (ZPE) are taken into account, and default criteria are used for all optimization.

Fig. 1 and Table 1 present the structures of low energy 4AP – HCl complexes. In the conformer (a) HCl interacts with a basic site (1-N) of 4AP by hydrogen bonding (analogous to NH3… HCl), whereas in (b) a hydrogen bond is formed between HCl and the amino group. The conformer (b) is of much higher in energy than (a), and this is understandable because the amino group is of much lower basicity than the 1-N or 3-N. Due to the high relative energy this conformer is of less importance. Since all the basic sites in 4AP are much less basic than ammonia, for which it is known that a solvating water molecule is needed to stabilize the zwitterionic form, it may be expected that the [4AP…HCl] complex is in the neutral form in the absence of the solvating water molecules, and that more than one water molecule is required to give stable ion pair form. This is verified by the conformer (c), in which a proton is transferred from HCl to 3-N in the conformer (d), producing a zwitterionic form. The calculated ZPE-corrected energy of (c) and (d) are found to be ~0.8 and ~0.4 kcal/mol higher than (a), respectively. The energies of (c) and (d) are quite similar, the ion pair form (c) lying only ~0.4 kcal/mol higher than (d). These two quasidegenerate forms may coexist in gas phase at low temperatures as long as there exists an appreciable barrier between the two. We find, however, that the thermodynamically less stable ion pair (c) transforms to (d) without barrier (Fig. 2), and predict that 4APH+ – Cl‒ is not stable. 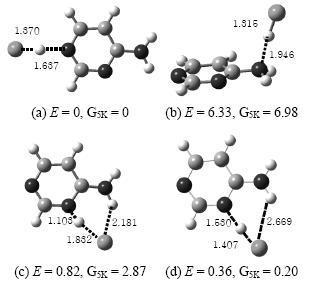 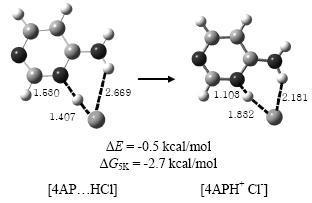 Since the dissociation energy of HBr is smaller than that of HCl, Proton transfer from HBr to a base is more facile. Therefore, we carry out similar analysis for the stability of the ion pair 4APH+ ‒ Br‒. Fig. 3 and Table 2 present the low energy 4AP ‒ HBr complexes. We find that the ion pair form 4APH+ ‒ Br‒ is indeed of lowest energy. Proton transfer from HBr to 3-N is so facile that we could not obtain the structure corresponding to (d) of 4APH ‒ HBr in Fig. 1, in which the HCl molecule interacts with the 3-N site as a neutral moiety. The HBr molecule in (c) forms a weak bond with the 3-N site in an “inverted” fashion with the Br atom, rather than the hydrogen atom, interacting with 3-N. The conformer (a), in which HBr bonds to 1-N, is now calculated to be ~2 kcal/mol higher than (d). It would be useful to examine the structural features of (d) to elucidate this stability of the ion pair 4APH+ ‒ Br‒. The Br‒ ion is stabilized by bridging 3-NH+ and the amino group, with the latter group acting as an “intramolecular solvent”. This observation illustrates that the stability of the zwitterionic form of the acid ‒ base pair may not determined solely by the inherent strength of hydrogen bonding basicity or by the interactions with the solvent, but that the structure of the molecular structure (the presence of multiple acidic or basic functional groups) may also be important. The structural characteristics of the complex (d) (the bridged bonding of the anion to the two basic functional groups) lends unusual and substantial stability to the ion pair (zwitterion), not to be seen for the interactions of strong acid HCl with a much stronger base (such as ammonia) with a single basic functional group in the absence of solvent. 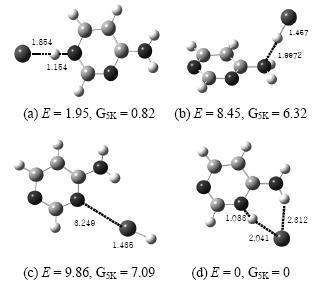 In summary, we have calculated the gas phase structures of 4-aminopyrimidine –HCl and –Br complexes, and found that the zwitterionic form [4APH+ – Br‒] is stable in the gas phase in the absence of the solvating water molecules. We have provided a situation where a bridged hydrogen bonding between an acid and the multiple basic sites produces a stable zwitterionic form of acid – base complex. Experimental study of our finding would be highly desirable.