Spectrophotometric investigation of the interaction of Cefpodoxime proxetil (CFP) with and in acidic medium showed the formation of 1:1 complex. The absorption spectrum of pure drug exhibits two prominent peaks at 270 and 345 nm. Its spectra scanned at several pH exhibited two isosbestic points (305 and 330 nm) indicating the presence of zwitterionic condition of drug in solution phase. The fluorescence emission spectra of CFP in presence of different concentrations of metal ions showed enhancement in fluorescence intensity which is ascribed to chelating enhancement fluorescence effect (CHEF). The stoichiometry of the complexes was determined by Job’s and Benesi-Hildebrand method. The stability of the complexes follow the order .

Cefpodoxime proxetil (CFP) is a semisynthetic β-lactum antibiotic known as (RS)-1(isopropoxycarbonyloxy) ethyl (+)-(6R, 7R)-7-[2-(2-amino-4-thiazolyl)-2-{(Z) methoxyimino} acetamido]-3-methoxymethyl-8-oxo-5-thia-1-azabicyclo [4.2.0] oct-2-ene-2-carboxylate. It is an ester prodrug of cefpodoxime acid where a proxetil radical is attached to cefpodoxime acid (Fig. 1). It is the third generation cephalosporin ester, used in the treatment of upper respiratory tract and urinary tract infection. In biological system cefpodoxime undergoes ester hydrolysis and converted into cefpodoxime acid to exhibit its antibiotic activity.1,2 It has an asymmetric carbon at position 4 and is supplied as racemic mixture of R and S-enantiomers. Only a few methods are reported to quantify CFP,3,4 nevertheless the analytical methods of detection of CFP are handful, and they employ RPHPLC. These methods are based on separation of the R- and S-isomers.5 However, both the isomers are reported to exhibit similar biological activity,1 the use of highly sophisticated and time-consuming methods is not always required for routine analysis of CFP from the different dosage forms.

The discovery of cephalosporin from C.acremonium culture by Brotzu6 and demonstration of its remarkable stability towards aqueous solution even at pH 2 as well as its excellent in vitro activity against penicillin-resistant organisms by Abraham and Newton,7 were major breakthroughs in the history of β-lactam antibiotics. The realization that fungi might be a good source for novel antibiotics spurred microbiologists to develop novel soilscreening programmes for the investigation of microbial culture leading to the discovery of several non-classical β-lactams like carbapenem8 and oxacephems.9 The reactivity of β-lactam antibiotics is fundamentally linked to antimicrobial activity, it led Woodward10 to design and synthesize carbapenem group of compounds for evaluation of their antibacterial activity through systematic screening of the soil microorganism. Numerous of these compounds show broad-spectrum antimicrobial activity as predicted earlier and it was further substantiated by the subsequent discovery of thienamycin. It is unstable in its pure form and hence its derivatives are used which also led to the introduction of imipenem, which is regarded as one of the most effective drugs among the β-lactam antibiotics. Although several methods have been developed to determine the drug in biological fluids and pharmaceutical preparations11 no effort seems to have been made to investigate the interaction of the drug with metal ions.

In the present work an earnest effort has been made to study the interaction of the CFP with metal ions by fluorescence emission and absorption spectrophotometric measurements. Since quenching or enhancement in fluorescence intensity of the drug in presence of metal ions occurs, the spectra of the drug in presence of different concentrations of metal ions such as Ca2+, Mg2+, Mn2+, Fe3+, Co2+, Ni2+, Cu2+, and Zn2+ were scanned. The ratio of the drug to metal ions was determined by Job’s method and Benesi-Hildebrand methods.12,13 The absorption spectra of the drug in the pH range 2.32-11.50 were run to see the zwitterionic condition, apparent ionization constant and the isosbestic point which indicate the presence of different species in solution. The stability constant of the complexes formed between the drug and metal ion was also evaluated. 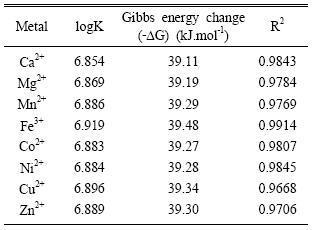 Solution of the CFP (7×10-6 M) and those of metal ions (1×10-6 to 7×10-6 M) were prepared. To prepare dilute solutions, an aliquot of stock solution was placed in a 10 ml volumetric flask and made up to the mark with distilled water. Spectra were recorded immediately after sample preparation in the optimum wavelength range 370-430 nm at optimum excitation wavelength of 335 nm. For calibration curve an aliquot of stock solution (1×10-6 to 3×10-5 mg/ml) was prepared which showed linearity with correlation factor (R2) 0.9652

When the spectra of the drug were run at varying pH in the region 250-380 nm two isosbestic points, one at 305 nm and another at 330 nm were observed which indicated the presence of zwitter ionic condition in solution (Fig. 3).14 The apparent ionization constant (pKa') of the drug was calculated (8.92) by the following equation. 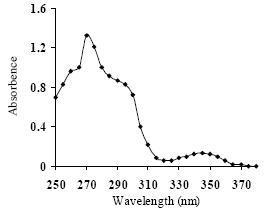 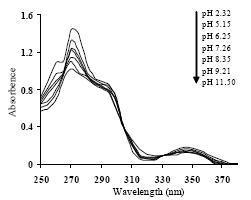 The absorption spectra corresponding to the metal, drug and complexes were obtained in acidic medium. The concentration of cations and drug (CFP) were 1×10-4 M. The stoichiometry of the complexes was obtained by Job’s methods12,15 a sample of resulting plots is shown in Fig. 4. The stability constant of chelate formed is calculated by following equation

where, K is the stability constant of the metal chelate formed in the solution, M = metal, L = ligand, X = mole fraction of the ligand at maximum absorption. A/Aex is the ratio of the absorbance to that indicated by the tangent for the same wavelength. Cx, CM and CL are the limiting concentration of complex, metal ion and the drug respectively.

The stability constant is related to the standard enthalpy changes ΔH and other thermodynamic function by the equation:

where R is the gas constant T is the experimental temperature, K is the binding constant at the corresponding temperature.

From the value of stability constant at different temperature the enthalpy changes can be calculated by using the equation:

The negative value of ΔG for the complexation process suggests spontaneous nature of such process.16,17 The positive value of ΔH suggests that these processes are endothermic and are favourable at higher temperature. Also it is entropically favourable. The positive value of H and S indicates that hydrophobic force may play a major role in the interaction.18 It is reasonable to think, on the basis of these results that the metal ions form a five membered chelate ring with CFP. 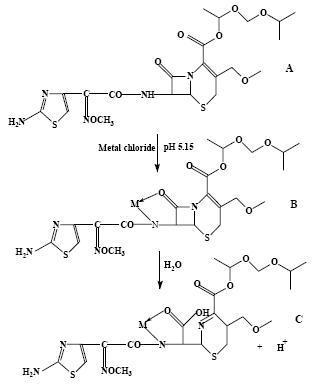 Fig. 5.Mechanism of binding of CFP with metal ions: A. CFP, B. CFP‐metal complex, C hydrolyzed form of complex.

The stoichiometry and stability constant of the complexes was determined by Benesi-Hildbrand method.13 The Benesi-Hildebrand plots were examine to further characterize the stoichiometry of the CFP-metal complexes. In case of a 1:1 complex, the following equation is applicable: 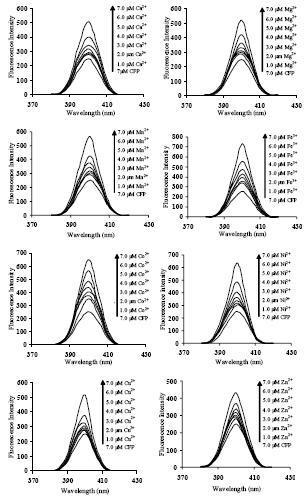 Fig. 6.Fluorescence enhancement (at λex 335nm) of CFP in presence of metal ions.

In this approach, a graph of 1/(F − Fo) versus 1/[Me]o, was made where F is the observed fluorescence at each concentration tested, Fo is the fluorescence intensity of analyte in the absence of metal ion, F∞ is the maximum fluorescence intensity in presence of metal ions and [Me]o is the concentration of metal ion. A linear plot is required for this double reciprocal plot in order to conclude 1:1 stoichiometry. In such cases, a linear relationship has to be obtained when 1/(F − Fo) versus 1/[Me]o is plotted. The stability constant is determined by dividing the intercept by the slope of the straight line obtained in the double-reciprocal plot. (Fig. 7) 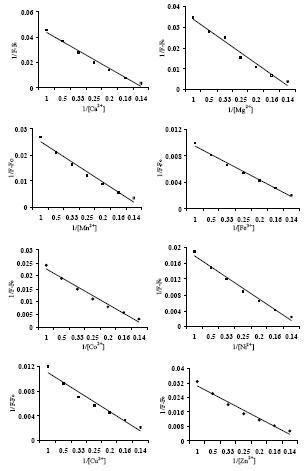 The influence of metal ions concentration was studied in the range of 1×10-6-10×10-6 M. The fluorescence study of interaction CFP with metal ions in acidic aqueous medium showed 1:1 stoichiometry. Both these study also support the formation of 1:1 CFP:Metal complex, with the possibility of metal ions chelating with CFP by β-actum carbonyl carbon and acidamide nitrogen.

In general, the phenomenon of enhancement is observed because the complexation by cations causes increase in the redox potential of the donor so that the relevant HOMO energy decreases to a level lower than that of fluorophore. Consequently the excited state energy of fluorophore is dumped as a visible emission.19

In the present work an attempt has been made to study the interaction of the CFP with metal ions by fluorescence emission, absorption spectrophotometric and measurements. Since enhancement in fluorescence intensity of the CFP in presence of the metal ions occurs, the spectra of the drug in presence of different concentrations of several metal ions were scanned. The ratio of the drug to metal ions was determined by Job’s and Benesi-Hildbrand method. The absorption spectra of the CFP was run at different pH to see the zwitterionic condition, apparent ionization constant and the isosbestic point indicating the presence of different species in solution. The stability constant of the complex formed between the drug and metal ion was also evaluated.

In this paper the nature and magnitude of the interaction of CFP with biologically important metal ion was investigated by fluorescence spectra and UV spectra. The experimental result indicated the formation of 1:1 complex of CFP with metal ions in acidic medium by Job’s and Benesi-Hildbrand method. The absorption spectra at different pH showed the presence of two isosbestic point indicating the existence of zwitterionic condition. The thermodynamic parameters showed that the interaction between CFP and metal ion was spontaneous, and that the hydrophobic force was a major factor in the interaction.