The potential feasibility of Maghnia clay as adsorbent to remove three cationic dyes (methylene blue (MB), neutral red (NR) and malachite green oxalates (MG)) from aqueous solution was investigated at various operating parameters such as contact time, pH, initial dye concentration and adsorbent dose. Optimum pH values for dyes adsorption were 6 for NR and 7 for MB and MG, respectively. Maximum adsorption of dyes, i.e. 90% has been achieved in aqueous solutions in 60 minutes. The adsorption of dyes followed the pseudo-second-order rate equation.

Dyes effluents released (approximately 7. 105 tons) into the environment by technological activities pose a serious threat to the environment. Their presence in water, even at very low concentrations, may significantly affect photosynthetic activity in aquatic life due to reduced light penetration. In addition, some dyes such as azo and triphenylmethanes groups are either toxic or mutagenic and carcinogenic.1 Due to their synthetic origin and complex aromatic molecular structures, which make them more stable, non- biodegrade, conventional wastewater treatment techniques such as oxidation-reduction and exchanging resins of ions,2 coagulation/flocculation,3 membrane separation,4 adsorption,5 biological methods,6 and more recently the advanced processes of oxidation, 7 are ineffective. Adsorption is one of the effective methods to remove coloured textile contaminants from wastewaters.

Recently, we used clay mineral for the successful adsorption of metal ions,25,26,27 basic dyes28,29 as a result of their catalytic properties and high capacity in the removal contaminants too stable and resistant for conventional methods. Adsorption of cationic organic dyes in smectite clays has been extensively studied, mainly in aqueous solution. This clay is a dioctahedral smectite with isomorphic substitutions of Al+3 by Mg+2 with structural formula unit:

However, for Maghnia montmorillonite, part of the negative charge around 15 - 50% is due to tetrahedral substitutions of Si+4 by Al+3. This clay has an appreciable content of iron.

The adsorption of cationic dyes is not exclusively due to the ionic exchange mechanism but other interactions, such a hydrophobic effect between guest molecules on the clay surface30 and/or H-bonding31 can contribute to the adsorption of organic dye on clay surface, favouring the dye agglomeration.

The aim of the present study was to assess the potential ability of locally available clay originated of Maghnia montmorillonite deposit (west of Algeria) for removal of three cationic dyes (methylene blue, neutral red and malachite green oxalates) from aqueous solutions. The adsorption of dyes was investigated in solutions of pH 3 - 13. The adsorption kinetics was determined quantitatively by the pseudofirst-and second-order reactions.

Natural clay was supplied by the Ceramics Society of Maghnia (west of Algeria). The sodium form of clay with a particle size < 0.2 μm was prepared in order to obtain good clay colloidal dispersions, as follows: clay was saturated with Na+ by repeated exchange with NaCl (1 M) aqueous solution. The < 0.2 particle size fraction was separated by centrifugation and it was washed several times with distilled water until free Cl‒ was not detected in the suspension (AgNO3 test). The < 0.2 fraction was collected, freeze dried at 60 ℃ for 24 h and crushed. The material resulting from different treatments will be indicated by clay-Na. 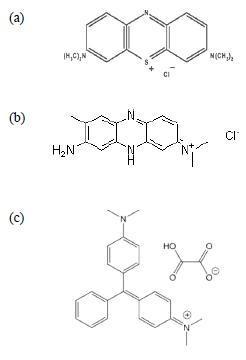 Adsorption kinetics experiments were carried out as a single-stage batch test using a magnetically stirrer at 298 K using 250 mL beaker containing 100 mL different concentrations and initial pH values of dye solutions. The initial pH of dye solutions was adjusted by HCl/NaOH solutions using digital pH-meter (HANNA HI 83141). Different doses of sorbent were added to each beaker. The samples were withdrawn from the beaker at the predetermined time intervals, and adsorbent was separated from the solution by centrifugation (EBA-Hetlich) at 3500 rpm for 15 min. Dye concentrations in the supernatant solutions were subsequently estimated by measuring absorbance at maximum wavelengths of dyes with UV mini-1240 spectrophotometer (UV-Vis Spectrometer SHIMAHIDZU) and computing from the calibration curves. The experiments were done by varying the initial pH (3 - 13); amount of adsorbent (0.1 - 0.5 g/L) for MB and (0.07 - 0.2 g/L) for NR and MG respectively and concentration of dye solution (30 - 70 mg/L) at different time intervals.

The efficiency of color removal was expressed as the percentage ratio of decolorized dye concentration to that of initial one (Eq. (1) and (2)):

Where Co and Ce are the initial and equilibrium dye concentrations (mg/L) respectively. V is the volume of the solutions (L), and m is the weight of the clay-Na (g).

Table 1 displays the results of chemical composition (Oxford spectrometer) in the clay-Na sample. The major elements of the clay-Na, expressed in terms of oxide, are primarily of silica, and alumina with appreciable iron content. The CaO and Na2O (K2O) reflect the contents of interlayer cationic in clay. The other oxides present in traces amounts such. In the perfect montmorillonite structure, the total theoretical content of SiO2 and Al2O3 is 92%32 and the content ratio of SiO2 to Al2O3 is 2.6. In the Maghnia clay, the total content of SiO2 and Al2O3 is 84.90% and the corresponding ratio of SiO2 to Al2O3 is 2.52, so this type of clay belongs to the Na-montmorillonite category. The cation capacity of exchange and total specific surface of the clay-Na were estimated by the methylene blue (MB) method33 are of 101.72 meq/100 gr of clay-Na and 673.93 m2/g respectively. 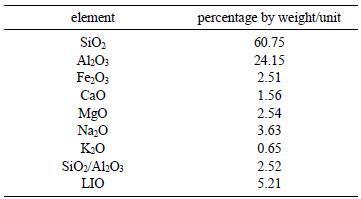 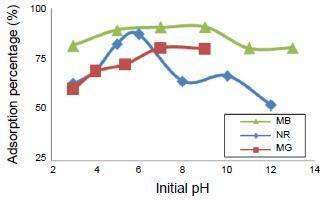 For clay minerals the potential determining ions are H+ and OH‒ and complex ions formed by bonding with H+ and OH‒. The broken Si-O bonds and Al-OH bonds along the surfaces of the clay crystals result in hydrolysis, is an amphoteric surface hydroxyl group that can associate (Rec. 1) and dissociate (Rec. 2) proton.

To explain the relationship between the layer charge density and the adsorption, so-colled models of surface complexation (SCM) was developed.34 In the 2-pK approach we assume two reactions for surface protonation.35

Lower adsorption rate of dyes at low pH is probably due to the presence of excess H+ ions competing with the cations groups on the dyes for the adsorption sites.

However, the high removal percentage observed for NR at pH 6 (low pH) is attributed to the formation of surface hydrogen bonds between the surface of the hydrogen bonds of the hydroxyl groups on the clay-Na surface and the nitrogen atoms of neutral red cations.36

At high pH the reaction is: 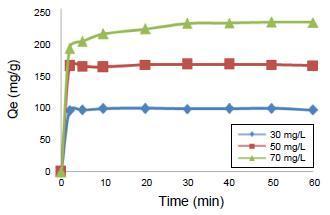 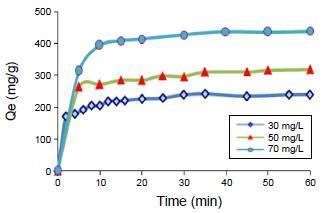 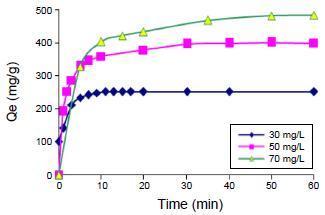 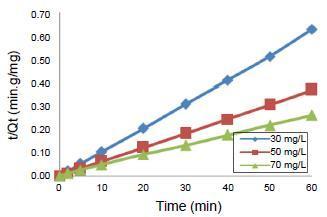 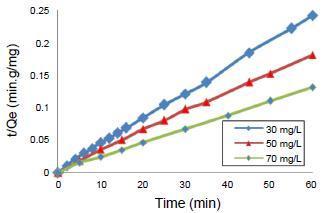 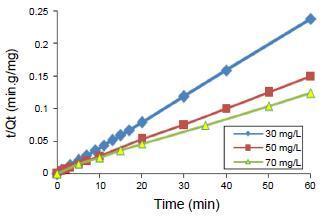 In our studies the adsorption maximum for both MB and MG dyes were achieved at pH 7 respectively. So at neutral and high pH, the solution in contact with the basal oxygen surface of the tetrahedral sheet will contain excess hydroxyls. The surface will then exhibit a cation exchange capacity (Rec. 3):

The adsorption percentage of MB decreased over the pH range of 9 - 13(above pH 9), then remained constant up to pH 13. Such decrease is assigned to the presence of dimers in the clay-Na environment competing with the monomers cations (MB+) on the dyes for the active sites (Supporting results). 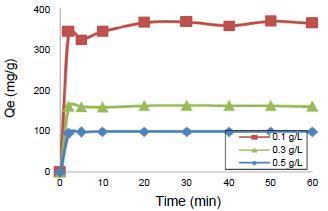 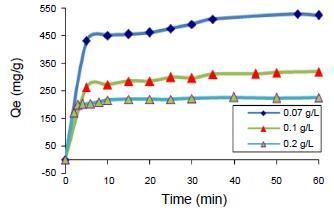 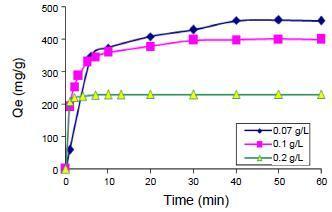 On the other hand, at neutral and higher pH (above 10), most NR dye occurred in the undissociated form. Due to hydrophobic interactions between aromatic rings of dye molecules, Neutral red tends to aggregate in aqueous solution. This aggregation phenomenon is more noticed at high alkali medium.37 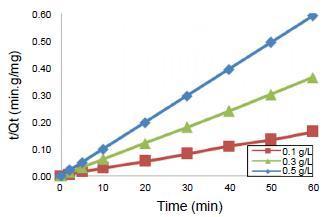 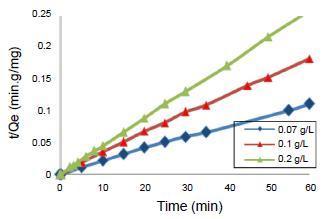 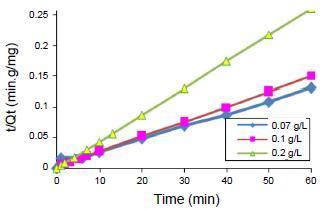 The effects of initial dye concentration (Figs. 3, 4 and 5) and adsorbent dose (Figs. 9, 10 and 11) as a function of contact time were conducted in the range of 0 to 60 min. The results indicated that the process is found to be very rapid initially, and the equilibrium is achieved within 10 min.

This may be attributed to overlapping of adsorption sites as a result of overcrowding of adsorbent.38

The adsorption kinetics of dyes at different initial concentration, illustrated in Figs. 3, 4 and 5, were treated with a pseudo-first order and pseudo-second order models.

The pseudo-first order equation of Lagergren39 is generally expressed as follows (Eq. (3)):

where Qe and Qt (both in mg/g) are the amount of dye adsorbed per unit weight of adsorbent at equilibrium and at any time t, respectively and K1 (min-1) is the rate constant for adsorption of dye. At given boundary conditions for t = 0, Qt = 0, the equation Eq. (3) can be integrated to give (Eq. (4)):

The values of K1 were calculated from the slopes of the respective linear plots of log (Qe - Qt) versus t. The regression coefficients, R2, (given in Table 2) for the pseudo-first order model at different initial concentration (30 - 70 mg/L) did not exceed the values of 0.925, 0.968 and 0.988 for MB, NR and MG respectively. The calculated Qe values obtained from pseudo-first order kinetic model for dyes were much different compared with experimental Qexp values. These results suggest that the process does not follow the pseudofirst order rate equation of Lagergren.

The adsorption of dyes onto clay-Na at different adsorbent doses were also analyzed with pseudo-first-order model, the regression coefficients, R2 (given in Table 3) result as 0.539, 0.921 and 0.966 for MB, NR and MG respectively. This finding indicates that the adsorption of dyes onto clay-Na does not follow the pseudo-first order model of Lagergren.

The adsorption kinetics following pseudo-second order model given by Ho40 is represented in the form (Eq. (5)):

The linearity of the plots of t/Qt versus t for adsorption of dyes onto clay-Na at different initial concentration (Figs. 6, 7 and 8, Table 2) and various adsorbent dose (Figs. 12, 13 and 14, Table 3) suggest that all adsorption data of dyes are satisfactorily described by pseudo-second order model with extremely higher regression coefficient (R2 > 0.998), based on the assumption that the rate-limiting step may be chemisorptions involving valency forces through sharing or exchange of electrons between the hydrophilic edge sites of clay-Na and polar dye ions.41 The calculated Qe values obtained from pseudo-second-order kinetic model were close to the experimental Qexp values for all dyes.

The potential ability of Maghnia clay to remove three cationic dyes (methylene blue, neutral red and malachite green oxalates) from aqueous solution was investigated at various parameters (contact time, pH, initial dye concentration and adsorbent dose). Optimum pH values for dyes adsorption were 6 for NR and 7 for MB and MG respectively. Maximum adsorption of dyes, i.e. ≥ 90% has been achieved in aqueous solutions by using 0.1 and 0.3 g/L of clay at pH 7 (for both NR and MG) and 6 for MB respectively. The adsorption of dyes followed the pseudo-secondorder rate equation.