The variations of molar conductivity of various surfactants such as sodium caprylate, sodium laurate, sodium palmitate, sodium stearate, sodium oleate, sodium dodecyl sulphate, and lithium dodecyl sulphate with concentrations of the surfactants for each of the solutions consisting of mixtures of varying concentrations of N-methyl acetamide in water at constant temperature of were studied. The critical micelle concentration (CMC) for each surfactant is measured. It is found that the CMC values in mixtures of N-methyl acetamide and water solutions of various surfactants are lower than the CMC values in water, and the driving force for micelle formation correlates with solvophobicity. The surfactant-solvent interactions that drive amphiphilic self-organization in N-methyl acetamide in water are discussed. Thermodynamic parameters were evaluated for micellar system to explain the results.

Recently, micelle formation in non-aqueous solvents has attracted little attention as compared to the vast number of extensive studies that have been reported in the literature dealing with the formation of micelles in aqueous surfactants solutions. To differentiate them from “inverted” micelles which are formed in non-polar organic solvents, the term “solvophobic” has been applied by various researchers1-3 to organic solvents, analogous to the “hydrophobic interactions” causing micellization in aqueous media.

Hydrophobic interactions are important in maintaining conformation of proteins and various macromolecules. The free energies of the enthalpy changes are actually unfavorable at low temperature, DH>0. It is generally believed that around the non-polar parts of the surfactants in contact with water there is an increased ordering of water molecules as the result of hydrogen bonding and that on the formation of the hydrophobic bond this order is diminished, so there is a positive entropy change.4-6 The micelles formed due to “solvophobic interaction” in polar non-aqueous solvents are similar in many respects to the micelles that are formed in aqueous media, although, in general, micelle formation is not as favored in non-aqueous solvents (of low dielectric constants) as in water for a given surfactant.1,2,7 In spite of the recognition of the importance of water structure in micelle formation in aqueous surfactant solutions, no significant attempt seems to have been made to investigate the role of the structure which may exist in many polar organic solvents due to the presence of one or more potential hydrogen bonding centers in their molecules.1,2,7-11

The critical micelle concentration (CMC) of several salts of fatty acids and other long hydrocarbon chains terminating in a group capable of ionization in water has been studied by several researchers, with hundreds of references in the literature, which cannot all be cited. However, important work on colloidal electrolytes is relevant to the present work.12-15 Relatively fewer papers on solutions of surfactants in non-polar solvents have been published.16 Almost no work has been done on the properties of sodium salts of fatty acids in polar solvents other than water. Recently some work has been done in this laboratory on micelle formation in molten acetamide which acts as a good solvent for both ionic inorganic and covalent organic compounds.17-23

Table 1.A comparison of some of the physical properties of Nmethyl acetamide and water

N-methyl acetamide (NMA), after drying for 72 hours on freshly ignited quick lime, was repeatedly vacuum distilled and the middle fraction of NMA having a specific conductivity (k) in the range of 2×10-6 S cm-1 was collected.24,25 All the surfactants used in the present work were obtained from Fluka (purity > 99%), and were used without further purification. Specific conductivities of the solutions were measured at a constant temperature at 30.0 ±0.2 ℃ using a Crison model 255 Conductivity meter and a dipping cell with platinum electrodes (cell constant, 0.12 cm-1). The reproducibility of the instrument was better than 0.2%. Doubly distilled deionized water of conductivity 1×10-6 S cm-1 was used throughout the work.

It is observed that the CMC of surfactants in N-methyl acetamide-water mixture is lower than the CMC of surfactants in water.12-14 Fig. 1 shows the plot of log cmc of Sodium Caprylate, Sodium Laurate, Sodium Palmitate and Sodium Stearate against the number of carbon atoms in the alkyl chain in the surfactants. A straight line is obtained showing that as the number of carbon atoms in the alkyl chain increases the CMC decreases. Similar behavior has been observed by some researchers for aqueous solutions of some surfactants.36-39 It is also evident from Fig. 1 that the CMC of the surfactant decreases as the concentration of N-methyl acetamide in water increases, suggesting that such a mixture will have higher a dielectric constant than water because of the presence of Nmethyl acetamide. It can be concluded that the CMC values of sodium salts of saturated fatty acids, sodium salts of unsaturated fatty acids, lithium dodecyl sulphate and sodium dodecyl sulphate in N-methyl acetamide-water mixtures are lower than the CMC values of these surfactants in pure N-methyl acetamide. In this respect, Nmethyl acetamide behaves like normal alcohols.16 Similar effects have been observed by the addition of a hydrocarbon, which lowers the CMC. This is opposite to the behavior of dioxane and urea, which have small and complex effects. At higher concentration they markedly increase CMC or even inhibit micelle formation.16,20 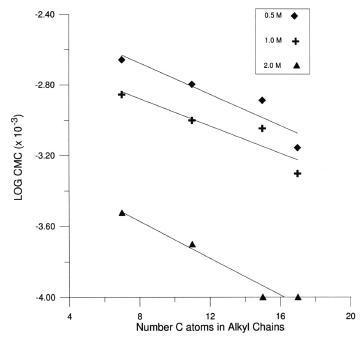 Fig. 1.Plot of log cmc of surfactants against the number of carbon atoms in the alkyl chain of the surfactants at various concentration of N-methyl acetamide in the mixtures at 30±0.2℃. 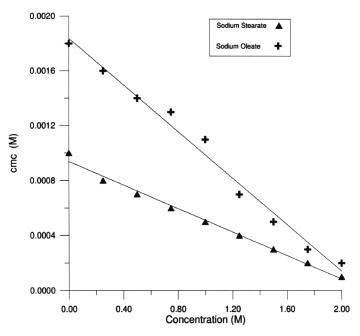 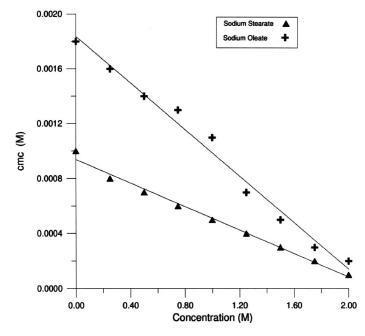 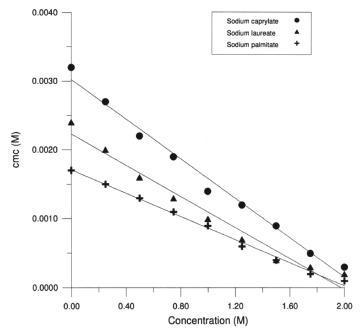 It is observed from Table 2 that the CMC of sodium oleate, which has a doubled bond, is higher than that for sodium stearate in N-methyl acetamide-water mixtures. Both surfactants have eighteen carbon atoms. A similar behavior has been observed for these two surfactants in aqueous solutions by other workers.35 The introduction of a double bond in a surfactant leads to increased CMC in comparison with the corresponding surfactants without double bonds as shown in Fig. 2.

LiDS have a higher CMC than NaDS in acetamidewater mixtures as shown in Fig. 3. It appears that the CMC of alkali dodecyl sulphates increases with decreasing counter ion atomic number. Various researchers have reported that the increasing ionic radius of the alkali metal ions causes a decrease in the CMC. The smaller the hydrated radii, the greater will be the action on charged groups of the micelle and the greater the lowering of the CMC.36-38

To elucidate more clearly the effect of N-methyl acetamide on the CMC of aqueous solution of surfactants (NaDS, LiDS, NaO, NaS, NaPalm, NaL and NaCap), the ratio (β) of the number of counterion to that of the surfactantion in micelles in varying concentrations of Nmethyl acetamide-water mixtures is determined.

The result shown in Fig. 1 permits the calculation of standard free energies of micellization, ΔG°m, for various surfactants in N-methyl acetamide-water mixtures. The ΔG°m values are calculated using the relationship.

even though the size of the micelle is not known at present. Also, the low CMC values in N-methyl acetamide may invalidate the use of the above mentioned equation because the monomer activity would be quite different from the monomer concentration. Such DG values should, therefore, be taken only as an approximation.39 The results for various surfactants in NMA are mentioned in Table 3.

Table 3 shows a decrease in Gibbs energy as the number of carbon atoms in alkyl chain of various surfactant increases. It suggests that a strong solvophobic interaction takes place for longer alkyl chains of Sodium surfactants in N-methylacetamide-water mixtures.

The CMC values of NaDS, LiDS, NaO, NaS, NaPalm, NaL and NaCap, in N-methyl acetamide-water mixture at different temperatures were determined. The plot of ln CMC of four surfactants against 1/T gives a good straight line with a negative slope. This shows that the micelle size does not change within the temperature range studied. In the present work the modified form of van’s Hoff equation, is applicable. The value of ΔH°m, enthalpy of micellization, has been calculated from the slope of the line and is included in Table 3.

These values are in the range of the hydrogen bond energy. N-methyl acetamide has a strong tendency to form hydrogen bonding. Negative values of ΔH°m were obtained from the micelle formation of the surfactant tetradecyl-trimethyl-ammonium bromide (C14 TAB) in water and hydrazine.40 The standard entropies of micellization were calculated from the values of ΔH°m and ΔG°m using ΔG°m=ΔH°m-TΔS°m and are also included in Table 3.