A diketo-type ligand was synthesized by the Knoevenagel condensation reaction of thiophene-2-aldehyde with acetylacetone, subsequently its transition metal complexes with Cu(II), Ni(II), and Co(II) chlorides were also prepared. All the complexes were characterized by various physico-chemical methods. The molar conductivity data reveals ionic nature for the complexes. The electronic spectrum and the EPR values suggest square planar geometry for the Cu(II) ion. Interaction of the Cu(II) complex with CTDNA (calf thymus DNA) was studied by absorption spectral method and cyclic voltammetry. The values versus [DNA] gave a linear plot suggesting psuedo-first order reaction kinetics. The cyclic voltammogram of the Cu(II) complex reveals a quasi-reversible wave attributed to Cu(II)/Cu(I) redox couple for one electron transfer with values -0.240 V and -0.194 V. respectively. On addition of CTDNA, there is a shift in the values 168 mV and 18 mV respectively and decrease in Ep values. The shift in values in the presence of CTDNA suggests strong binding of Cu(II) complex to the CTDNA.

The coordination of metal ions to heterocyclic compounds has been the subject matter of intense investigation, as they can be promoted as clinically useful antibacterial and anticancer drugs. 1-3 The biological properties of these heterocycles can be further enhanced by condensing with suitable nucleophiles such as diketones etc. The knoevenagel condensation4-7 is well known process to synthesize the compounds using the electrophiles viz aldehydes with diketones as a nucleophile in presence of organic base. The product is dependent on the reaction conditions and normal knoevenagel reaction affords two fold condensation at the activated methyl and methylene moiety8 which makes the ligand more versatile for coordination. The current strategy for the drug design is not only based on structure but also the mode of action of the drug to its specific target. Thus the drug efficiency increases and dosage is also reduced. Metal based drugs form a suitable platform in this context,9-12 as transition metal ions are able to coordinate to the DNA by expanding their coordination number. Many authentic reports are avaliable in the literature which reveal the anticancer activity of the transition metal complexes containing oxygen, nitrogen and sulphur donors.13,14 Using thiophene-2-aldehyde in the presence of sodium ethoxide with acetylacetone as nucleophile yielded the knoevenagel product, subsequently its transition metal complexes [Cu(II), Co(II) and Ni(II) chlorides] were synthesized and characterized by various physico-chemical methods. Earlier reports on transition metal complexes and their interaction with CTDNA have shown that the complexes bind strongly to CTDNA by intercalation.15-18 In this paper, the interaction of the copper(II) complex with CTDNA has been studied spectrophotometrically as well as by cyclic voltammetry.

All the experiments involving interaction of the copper(II) complex with the CTDNA were carried out in aqueous solution with varying concentration of CTDNA (10×10-5, 12×10-5, 14×10-5, 16×10-5, and 18×10-5 mol·dm-3). The CTDNA concentration was determined by absorption spectrophotometry. Doubly distilled water was used through out. The stock solution of CTDNA was prepared by dissolving it in 10 ml tris HCl buffer at pH 7 and dialyzing against the same buffer for 48 h. The solution gave a ratio of >>1.8 at A260/280, indicating that CTDNA was free from protein.19 The concentration of CTDNA was determined by monitoring the u.v. absorbance at 260 nm using Σ260 = 6600 cm-1. The stock solution was stored at -20 ℃. NiCl2, CuCl2, (hydrated) (BDH), thiophene-2-aldehyde (Kochlight) and acetylacetone (Sisco) were used as received. CTDNA was obtained from Sigma. IR spectra (200-4000 cm-1) were recorded on Carl Zeiss Specord M-80 spectrophotometer in nujol mulls. The electronic spectra were recorded on a Systronic119 spectrophotometer (ESP-300) and NMR spectra on an amx-500 instrument. Cyclic voltammetry measurements were recorded on a CH instrument electrochemical analyzer. High purity H2O/MeOH (95:5) was employed for the cyclic voltammetric studies with 0.4 M KNO3 as supporting electrolyte. A three electrode configuration was used, comprised a Pt disc as working electrode, Pt wire as auxillary electrode and Ag/AgCl as reference electrode. Experiments were carried out at room temperature. 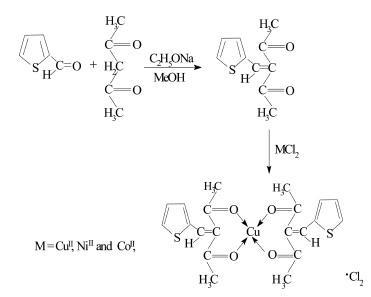 To a solution of thiophene-2-aldehyde (0.460 g, 5 mmol) in dry MeOH was added acetylacetone (0.515 g, 5 mmol) in the same solvent. The mixture was boiled to reflux for ca. 12 h and C2H5ONa was added to catalyze the reaction. A light yellow precipitate was obtained, filtered, washed with hexane thoroughly and dried in vacuo (yield=75%).

Similar method was adopted for NiII and CoII complexes.

Spectroscopic Characterization of the Complex

IR spectra: The most significant frequencies in the spectra of ligand and the complexes are shown in Table 2. The IR spectrum of the ligand shows bands characteristic of the ν(C=C) and ν(C-H) vibrations at 1630 cm-1 and 2860 cm-1 respectively. The ν(C-S-C) stretching frequency was observed at 705 cm-1. The free ligand showed an intense band at ca. 1594 cm-1, characteristic of ν(C=O).20 This band is shifted to higher wavenumber in the spectra of the complexes, supporting the involvement of C=O in the formation of complexes.21 This was further confirmed by the appearance of ν(M-O) band at 334-350 cm-1.22 The ν(C-S-C) absorption band appear at 703-707 cm-1 in all the complexes.

EPR spectra: The EPR spectrum of copper(II) complex shows signal a for gII and g⊥ at 2.24 and 2.09 respectively as anticipated for the square planar copper (II) complex.23

Electronic Spectra: The electronic spectrum of the ligand in EtOH exhibits bands at 241 and 350 nm, which may be assigned to the π-π* and n-π* transitions respectively (Fig. 1).

The electronic spectrum of copper(II) complex reveals bands at 281, 373 nm and a broad band at 876 nm. The first two bands are assigned to the MLCT transitions and the third band at 876 nm correspons to the 2E2g←2T2g transition for the square planar geometry.24 The electronic spectrum of nickel(II) complex in DMSO shows no absorption band at the longer wavelength regions suggesting a singlet 1Ag ground state consistent with four coordinate square planar geometry. These bands are at 376 and 443 nm assigned to 1A1g→1A2g, 1A1g→1B1g transitions respectively (Fig. 2).25 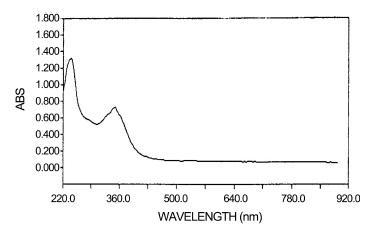 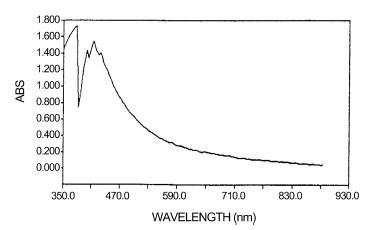 NMR spectra: The 1H and 13C NMR spectra for the ligand and the Ni(II) complex were run in DMSO. The results are given in the Table 3 and 4. The 1H NMR spectral data for the ligand and the complex are generally consistent with their formulation. The ligand exhibits signal at 6.8-7.7 ppm. attributable to the thiophene protons.26 The signal associated with the methyl protons appear as a multiplet in the region 0.9-3.0 p.p.m. region. The CH proton singlet was observed at 5.82 ppm.27 After complexation no major shift was observed. The thiophene protons appear at 7.0-7.6 ppm. The singlet at 4.8 ppm is assigned to the CH protons. The spectra also exhibit the peaks characteristic of methyl group in the 0.8-2.9 ppm range.

Interaction of the Cu(II) complex with CTDNA

Cyclic voltammetry: The cyclic voltammetry studies provide an insight to the CTDNA binding. The cyclic voltammogram recorded for the complex C20H20O4S2CuCl2 in H2O/MeOH (95:5) at a scan rate of 0.1 Vs-1 reveals one electron transfer reaction and a quasi-reversible wave with E1/2 values as -0.240 and -0.194 V, respectively (Fig. 3). The ratio of anodic to cathodic peak currents Ipa/Ipc is ~ 1. At different scan rates, the voltammogram does not show any major change (Fig. 4). For a reversible wave, Ep is independent of the scan rate and Ip (as well as the current at any point of the wave) is proportional to the ν1/2.28 The ΔEp value (248 mV) is larger than the Nernstian value observed for one electron transfer couple. Large peak width for one electron couple CuII→CuI in these complexes is not an uncommon observation.29 This is due to the reorganization of the coordination sphere during the electron transfer and has been observed in number of copper complexes as well.30 On addition of CTDNA, there was positive shift in E1/2 values of 168 mV and 18 mV as well as in Ep values (103 mV and 13 mV) (Fig. 5). The ratio of Ipa/Ipc for the bound complex decreases (0.62) suggesting, that CTDNA is bound strongly to the complex. In addition to the changes in the formal potential, the voltammetric peak current decreases upon the addition of CTDNA to the copper(II) complex. The decrease in the current is due to the diffusion of the equilibrium mixture to free and DNA bound metal complex to the electrode surface.31 A square scheme redox cycle showing the binding of CTDNA to the copper(II) complex is depicted as, 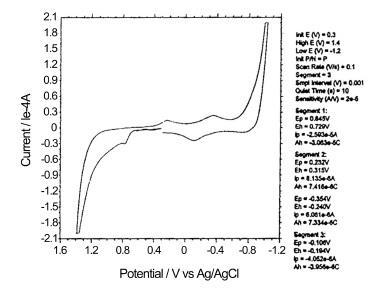 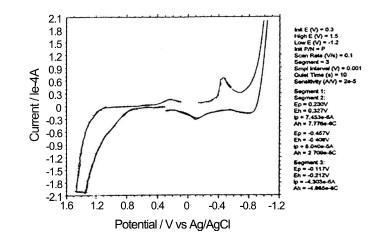 Fig. 5.Cyclic voltammogram of Cu(II) C20H20O4S2CuCl2 after addition of CTDNA.

Kinetic studies: The absorption spectrum of C20H20 O4S2CuCl2 was recorded spectrophotometrically in MeOH/H2O (5:95) at λmax of 281 nm at 30 ℃, which is characteristics soret band attributed to the MLCT transition. On addition of CTDNA, the absorption band at 281 nm shifts to 267 nm revealing a shift of 14 nm (Fig. 6) and hypochromicity (Fig. 7). Pronounced hypochromicity is observed after regular time intervals as authenticated by large number of reports.10,32 This suggests preferential intercalation in the DNA helix.33 Interaction of copper(II) complex at fixed concentration (1×10-5 mol·dm3) with varying concentration of CTDNA (10-18×10-5 mol dm3) were monitored spectrophotometrically to study the binding of DNA to the complex. The rate constant kobs values were calculatednby ploting –log A versus time (Fig. 8). The plot of kobs versus [DNA] gave a straight line suggesting a pseudofirst order reaction kinetics (Fig. 9). On the basis of kinetic data, the following mechanism is proposed with calf thymus DNA indicating intercalative binding mode.

Fig. 6.Shift in absorption spectrum of Cu(II) complex C20H20O4S2CuCl2 after interaction with CTDNA. 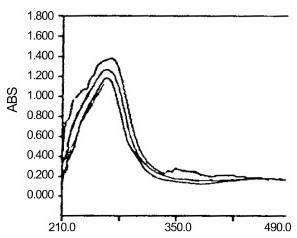 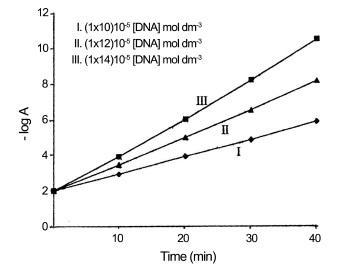 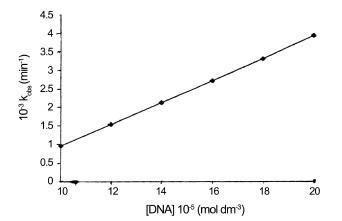 The rate law derived for the above proposed mechanism is 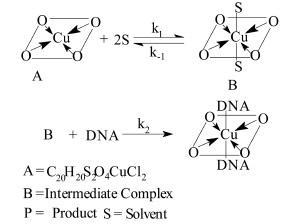 Our results are consistent with the derived rate law and support the proposed mechanism of binding to CTDNA.

In conclusion, the heterocyclic surface of the copper(II) complex intercalates into DNA which hinders the MLCT transition resulting in observed hypochromism.