The electronic structure and properties of Ni (=benzyne, n=1-4) complexes have been investigated using hybrid density functional B3LYP theory. Both aromatic natures and nucleus independent chemical shift (NICS) of the benzyne rings have been analyzed. Among mono-, di-, and tri-fluorinated complexes, 3-F, 3,6-F, and 4-H are the most stable isomers, respectively. NICS values calculated at the several points above the ring centers are consistent with those based on the relative energies of the complexes. The atoms in molecules (AIM) analysis indicates that Ni-C bond distance is well correlated with the electron density of a ring critical point () in all species.

Benzyne has been the subject of many theoretical and experimental investigations1-6 because it is found as an intermediate of many important organic or biochemical reactions.3,7-8 Since the first attempt for making metal complexes using benzyne by by Wittig and Bickelhaupt in 1958,9 many benzyne complexes have been successfully prepared,10-13 for example, M. A. Bennett et al.14 synthesized organometallic compounds, NiL2(C6H4)(L = PCy3, PiPr3; Cy = cyclohexyl, iPr = isopropyl). K. R. Deaton and M. S. Gin studied the reactions of nickel(0)-benzyne complexes with symmetrically substituted 1,3-diynes in the presence of triethylphosphine, which lead to the regioselective formation of 2,3-dialkynyl naphthalenes15. In the present study, the quantum chemical methods were used in order to gain a deeper insight into the structure and bonding of Ni(C6H4-nFn)(CO)2 (C6H4 = benzyne, n = 1 - 4) complexes and phenomena of the substituent effect in a benzyne ring.

All calculations were carried out with the Gaussian 03 suite of program.16 Light atoms (C, H, O and F) were described by the standard 6-31+G(d) basis set.17 Ni was described by the effective core potential (ECP) of Wadt and Hay pseudo-potential 21 with a double-ξ valance using the LANL2DZ basis set.18-20 Geometry optimization was performed using Becke’s hybrid three-parameter exchange functional and the nonlocal correlation functional of Lee, Yang, and Parr (B3LYP).22 A vibrational analysis was performed at each stationary point which corresponds to an energy minimum.

The AIM2000 program25 was used for the topological analysis of electron density, and the characteristics of ring critical points (RCPs) were taken into account: density at RCP (ρ(rc)), and its Laplacian (∇2ρ(rc)).

The calculated energy values of the compounds in this work are listed along with the selective bond angles in Table 1. When the compounds are classified with geometric isomers, 3-F, 3,6-F, and 4-H are the most stable isomer in each group. 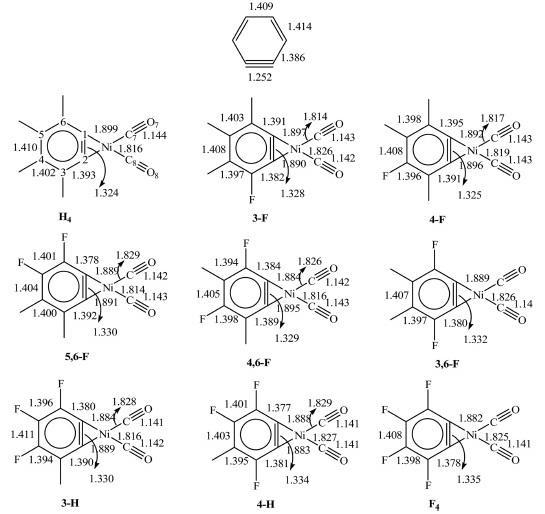 Fig. 1.Optimized structures of the compounds are displayed with bonds distances. Notice that the compounds can be classified into six groups according to their chemical natures, complexation or the number of F atoms: (benzyne), (H4), (3-F, 4-F), (5,6-F, 4,6-F, 3,6-F, 4,5-F), (3-H, 4-H), and (F4). In the multi-fluorinated compounds, 3-F, 3,6-F, and 4-H are the most stable ones which are used for the discussion of the their representative properties in this work. 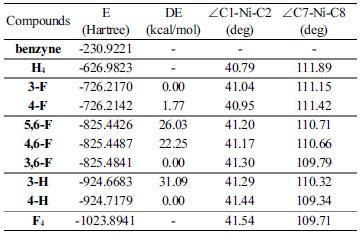 The bond distances of Ni-C(benzyne) decrease, and the Ni-C(O) bonds increase, revealing that the fluorination of benzyne reduces the back-donation of electron densities of Ni to the carbonyls. This observation is supported by the increase of Ni charges in the fluorinated complexes (Table 2): 0.420 (H4) to 0.421 (3-F), 0.432 (3,6-F), 0.432 (4-H), and 0.438 (F4). The bond angles around Ni atom also show a systematic trend that the C1-Ni-C2 bond angles increase while the C7-Ni-C8 ones decrease in the fluorinated complexes.

The HOMO and LUMO energies of the compounds in Table 3 show that all the Ni-complexes have higher HOMO and lower LUMO energies than those of benzyne, respectively. The HOMO—LUMO gap energies tend to decrease as the number of F atoms increases.

The symmetric and asymmetric stretching modes of CO are displayed in Fig. 2 and the calculated frequencies of CO ligands, ν(CO), have been presented in Table 3. These values increase in fluorinated complexes when the most stable isomers are considered.

Fig. 2.Stretching modes of carbonyl groups in the Ni-complexes: (a) asymmetric, (b) symmetric.

Along with the vibration analysis, we could compute 1H-NMR chemical shifts for the set of compounds by GIAO method. The calculated chemical shifts of protons are listed in Table 4. The H3 - H6 signals of H4 are expected to appear at down-field compared with those in benzyne, indicating that the complexation makes the benzyne ring more electron-deficient. When the F atom is introduced to H4, some of protons shift to up-field although a systematic trend is not clearly detected. This is probably due to the induction effect of the electronegative F atom which attracts electrons again from Ni to the benzyne moiety. 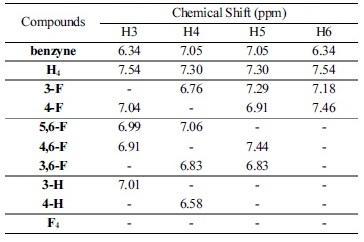 The benzyne 13C chemical shifts provide some support for aromaticity. The experimental d values for C1 and C2 in NiL2(C6H4) (L=PCy3, Cy=cyclohexyl) are 145.2 ppm.11 Also, the computed 13C NMR chemical shifts of the Ni(C6H4-nFn)(CO)2 are compatible with aromticity (Table 1). 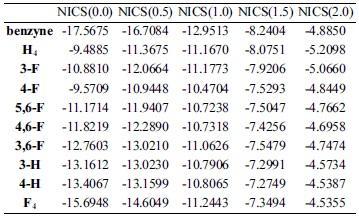 As it is difficult to separate the σ and π contributions to the electron density at the bond critical point, the ρ(r) values can be used to evaluate bond strength for different types of bonds (Table 6). The different values of ρ(r) and ∇2ρ(r) for the Ni-C bonds evidently indicate the relative Ni-C bond strengths. This result is in agreement with the geometrical analysis, showing that the Ni-C bond of Ni(C6H4)(CO)2 is longer than other species. On the other hand, the Ni-C bonds in all structures have positive values of ∇2ρ(r) which is indicative of the close shell interaction. 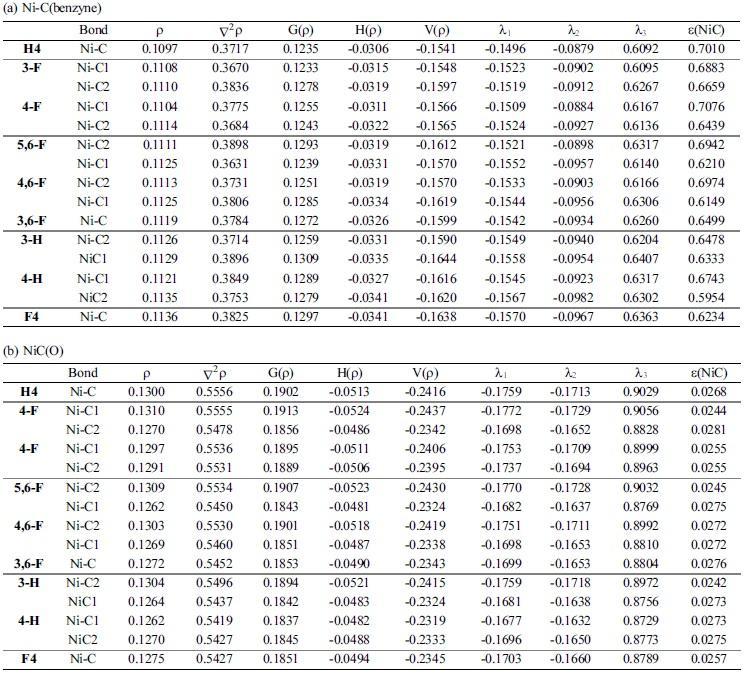 The comparison of electron density in the bond critical points of Ni-C(benzyne) and Ni-C(O) shows that ρ(Ni-Cbenzyne) is smaller than ρ(Ni-C(O)). This trend is wellmatched with the results of the geometrical analysis.

The bond ellipticity is defined as ε=(λ1/λ2)-1, where |λ1|≥|λ2|. It provides a quantitative measurement of the π character of the bond. The plane of the π distribution is uniquely specifies by the direction of the axis associated with the curvature of smallest magnitude, λ2. The ε(NI-C) values show that the Ni-C bond in fluorinated rings has a smaller π-character in comparison with Ni(C6H4)(CO)2 (Table 6). 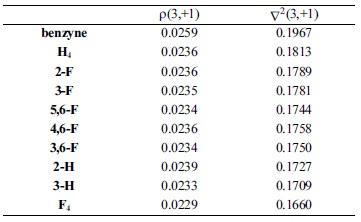 At the ring critical point of benzyne, both the electron density ρ(3,+1) and Laplacian of electron density ∇2ρ(3,+1) have been calculated for all complexes (Table 7). It is observed that these values become smaller in the fluorinated complexes when they are compared with those of benzyne and H4.

We investigated the structures and frontier orbitals of the Ni(C6H4-nFn)(CO)2 (C6H4=benzyne, n=1-4) complexes. The results suggest that 3-F, 3,6-F, 4-H isomers are most stable among the mono-, di-, tri-fluorinated complexes, respectively. Using the stable ones, both vibration and 1H-NMR shifts were calculated and analyzed. The NICS calculations confirmed the aromaticity in the benzyne rings of the compounds. Using the analyses of both electron densities and energy densities, we could explain the characters of the Ni-C bonds in complexes.