Hydrogen bonds having appreciable degree of directionality, flexibility and suitable strength are very important and have been widely studied in physics, chemistry and biology.1 Moreover, most reported work on crystal engineering has concentrated on organic supramolecular compounds.2-5 Crystal engineering with coordination bonds is a very popular research area because of the stable coordination bonds and versatile coordination modes of the metal ions, especially the transition metals. However, transition metal coordination compounds assembled by hydrogen bonding interactions have been less well studied.6-10 In this perspective, our aim is to construct coordination compounds of transition metals that can form hydrogen bonded supramolecular architectures with interesting dimensions and topologies.

Although the principles for controlling the solid structures of the target products still need to be classified and established, many rational synthetic strategies have been put forward.11,12 Among them, the selection of appropriate ligands as building blocks is undoubtedly a key point in manipulating the structures. Organic aromatic polycarboxylates as one of the multidentate O-donor ligands have been extensively employed in the preparation of multidimensional networks. In this respect, as a rigid and versatile ligand, terephthalate has been studied extensively.13-15 It can not only act as a hydrogen bond donor but also as an acceptor due to the existence of protonated and/or deprotonated carboxyl groups. Therefore, terephthalate is regarded as an excellent candidate for the construction of multidimensional hydrogen-bonded frameworks. However, the introduction of another kind of both N- and O- donor chelating ligands such as the tridentate Schiff bases in the {M/terephthalate} (M=transitional metal) system may induce new structural evolution. The introduction of the N-donor chelating ligands into the metal sites may not only inhibit the expansion of polymeric frameworks but also act as active sites for hydrogen bonding. The synthesis and crystal structure of a mixed-ligand CuII complex 1 (Scheme 1), using a tridentate Schiff base 4-bromo-2-[(2-piperazin-1-yl-ethylimino)-methyl]-phenol and terephthalate, constructing a one-dimensional hydrogen-bonded network are reported herein.

Scheme 1.Schematic representation for the preparation of the complex.

5-bromosalicylaldehyde and 1-(2-aminoethyl)piperazine of AR grade were purchased from Aldrich and used as received. Terephthalic acid was of analytical reagent grade (Fluka). Copper(II) perchlorate was prepared by reaction of Cu2(OH)2CO3 with perchloric acid in water. Methanol, ethanol and triethylamine were of reagent grade and were used without further purification. Double distilled water was used throughout.

In the IR spectrum of 1 the strong band in the range 1637-1645 cm-1 can be assigned to νC=N, which suggests coordination of the Schiff base ligand to the metal center through the imine nitrogen atom. The presence of the broad band in the range 2900-2400 cm-1 is indicative of hydrogen bond between the N-H group of piperazine and the carboxylate oxygen of terephthalate as well as solvent methanol molecule. A strong νC=O stretching band at 1695 cm-1 in the spectrum of the complex confirms that one of the carboxylate groups of terephthalate is present in a protonated form. The spectrum also shows typical chelating carboxylate antisymmetric and symmetric stretching bands at 1570 and 1367 cm-1 for 1.

Microanalysis (CHN) was performed in a Perkin-Elmer 240C elemental analyzer. FT-IR spectra were obtained on a Nicolet MAGNA-IR 750 spectrometer with samples prepared as KBr pellets in the 4000-400 cm-1 region. The 1H-NMR spectra were recorded on a 300 MHz Bruker Avance DPX 300 machine, Switzerland in CDCl3 with TMS as the internal standard at room temperature.

The diffraction data for 1 were collected at 150 K on a Bruker SMART CCD area-detector diffractometer, using monochromated Mo-Kα radiation (λ=0.71073Å). Data reduction and cell refinement were performed using the programs Bruker SAINT and Bruker SMART. An empirical absorption correction by using the SADAB16 program was applied, which resulted in transmission coefficients ranging from 0.682 to 0.729. The structure was solved by direct methods and refined by full-matrix least-squares based on F2 with anisotropic thermal parameters for nonhydrogen atoms using SHELXS-9717 (structure solution) and SHELXL-9718 (structure refinement). The software used to prepare material for publication was WINGX V1.80.03. The crystallographic data for the complex are summarized in Table 1. Selected bond lengths and angles are given in Table 2. Hydrogen bonds are listed in Table 3.

Table 1.Crystal data for the complex 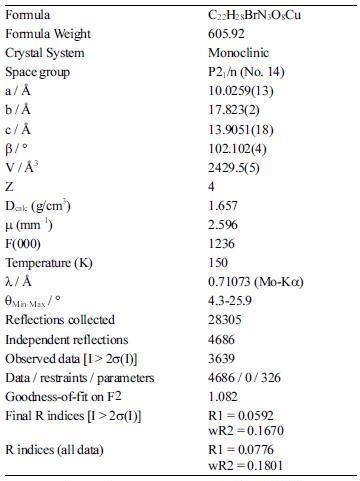 Table 2.Selected bond lengths (Å) and angles (°) for the complex

The molecular structure of the title complex is shown in Fig. 1, with selected bond lengths and angles are listed in Table 2. The crystal structure of the complex shows that the asymmetric unit contains a mononuclear molecule of the type [CuII(C13H17N3OBr)(C8H5O4)] along with two water and one methanol molecules as solvent of crystallization. The coordination environment for the copper center is best described by an approximately square-planar geometry. The Schiff base 4-bromo-2-[(2-piperazin-1-yl-ethylimino)-methyl]-phenol binds to the metal centre through two nitrogen atoms and one phenolate oxygen atom. Obviously, the Schiff base coordinates in a tridentate fashion to the Cu2+ ion. The C=N bond formed by the condensation reaction of length 1.285(8)Å is within the normal double bond range of 1.28-1.30Å. The other coordination site of the metal ion is occupied by an oxygen atom of terephthalate (O2) while the other carboxylate unit of terephthalate does not lose its H atom. Since there is a difference between two C-O bond distances of the free CO2 group (1.234(10) and 1.267(10)Å), so it should be considered as an acidic type of -CO2H. This fact is in good agreement with the IR data. The Cu1-O1 distance of 1.913(4)Å is considerably shorter than the Cu1-O2 distance of 1.948(4)Å, indicating that more negative charge is localized on the phenolic O1 atom than on the carboxylate O2 atom.19 The O3 atom of terephthalate seems to coordinate to the Cu(II) ion in the apical position with a bond distance of 2.727(5)Å. This distance is too long to be considered as a normal Cu1-O3 distance. The central copper atom is slightly above the square plane (0.016Å). By coordination to the metal atom, the tridentate Schiff base ligand forms six- and five-membered chelate rings. The dihedral angles between the mean planes phenyl and six-membered ring, phenyl and fivemembered ring and six- and five-membered rings are 2.83, 14.34 and 11.50°, respectively. Also, the phenyl ring of the Schiff base forms a dihedral angle of 63.62° with that of the terephthalate. These informations suggest that the molecule is deviated from planarity. 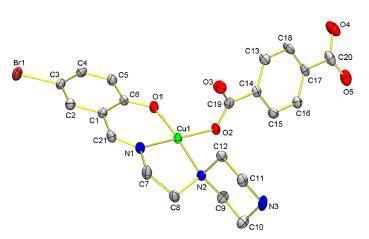 Fig. 1.ORTEP drawing of 1. Thermal ellipsoids are at 30% probability level. All hydrogen atoms and solvent molecules have been omitted for clarity.

Owing to the presence of solvent CH3OH and H2O molecules and considerable degree of hydrogen donation by the tridentate Schiff base and monoprotonated terephthalate, the crystal structure is stabilized by extensive hydrogen bonding. The complex unit forms hydrogen bond with solvent molecules and other adjacent complex units, thereby facilitates the formation of a one-dimensional network along the crystallographic c-axis as shown in Fig. 2 Two adjacent neutral [CuII(C13H17N3OBr)(C8H5O4)] molecules are held together via N3-H3---O4 and O4-H4O---N3 intermolecular hydrogen bonds, leading to a dimeric pair (Fig. 3). There are two discrete CH3OH (O6) and H2O (O7) molecules that actually bridge the dimeric pairs through N3-H3---O6 and O6-H6---O7 hydrogen bonds. In addition, the water molecule connects its neighboring terephthalate oxygen atom (O3) through appreciable degree of interaction (O3---O7 = 2.722Å). This value is in good agreement to that of the previously reported compound.20 It is obvious that the solvent molecules play a crucial role (i.e., acting like mediator) in constructing the supramolecular network. It is noteworthy that the piperazine N-H group undergoes hydrogen bonding in a ‘bifurcated’ fashion (N3-H3---O4 and N3-H3---O6) to construct the dimeric pair as well as the network (Fig. 4). The Cu---Cu separation within a dimeric pair is 13.212Å while that within two adjacent dimers is 10.026Å. The greater degree of Cu---Cu separation within a dimeric pair reveals the fact that the two molecules are at their opposite orientation to facilitate hydrogen bonding. In addition, the two carboxyl groups of terephthalate are slightly twisted, i.e., they are not in the same plane and make an angle of 34.60° favoring the formation of the network. The phenyl rings of the adjacent terephthalate units within a dimeric pair are parallel but are too far apart (4.578Å) for any normal π-π interaction. Thus, it is evident that the intermolecular hydrogen bonding is the only factor for the formation of the network. 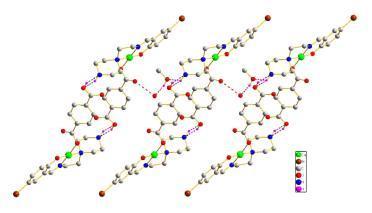 Fig. 2.View along the crystallographic c-axis of the one-dimensional structure of the title complex. 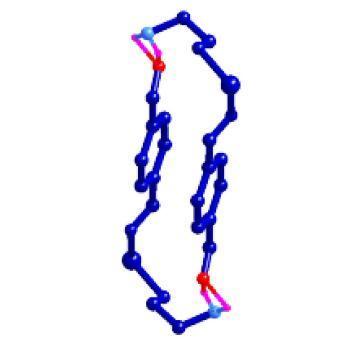 Fig. 3.A view of the hydrogen-bonded dimeric structure of the complex. 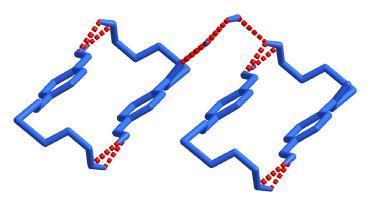 Fig. 4.Bifurcated hydrogen bonding that constructs the dimeric pair and the network.

It is evident from this discussion that the discrete methanol and water molecules actively participate in constructing a supramolecular network by expanding the dimensionality of the structure from zero to one via intermolecular hydrogen boding.

CCDC 779516 contains the supplementary crystallographic data for this paper. These data can be obtained free of charge from The Cambridge Crystallographic Data Centre via www.ccdc.cam.ac.uk/data_request/cif.