A particle counting system that can also provide sensitive, specific chemical information, while consuming very less power, occupying less space, and being inexpensive has been developed. This system uses a microwave plasma torch (MPT) as the excitation source for atomic emission spectrometry (AES). Emission from a single particle can be detected, and the wavelength at which the emission is observed indicates the elements present in the particle. It is believed that correlating the particle size and emission intensity will allow us to estimate the particle size in addition to abovementioned capabilities of the system. In the long term, this system can be made field-portable, so that it can be used in atmospheric aerosol monitoring applications, which require real-time detection and characterization of particles at low concentrations.

Particulate air pollutants, which exist as either in the form of liquids or solids, are known to have diverse toxicity effects on humans, plants, and animals, depending on their size and chemical composition of the particle.1 Estimating the size of the particle is as important as understanding their chemical composition since it affects important physical aspects such as the rate of diffusion, coagulation, interaction with light, and penetration to human lungs.2 There are various methods to identify the concentrations and the chemical and physical properties of particulate matter.3-7 Recently, Prather and Sullivan published a review paper that covers on-line aerosol analysis instrumentations.8 Among these identification methods, optical methods allow us to identify physical properties such as the concentration, size, and shape of the particles by measuring the transmittance or scattering of the light from them.9 Atomic emission spectrometry (AES), which uses microwave plasma, is preferred for investigating the physical and chemical properties of particles because it is easy to use and is economically feasible.10 Especially, when the chemical composition of the inorganic particles is unknown, AES can be used as a very effective quantitative analytical tool since the positions of the wavelength of atomic emission from an element are specific. Microwave plasma device is classified as microwave induced plasma (MIP), surface-wave plasma (surfactron), and microwave plasma torch (MPT). MIP device was introduced by Broida and Chapman as an atomization device and then developed and improved by Beenakker and Moisan in the atomic spectrometry.11-13 Perkins and Long atomized chemical species present in solutions using MIP and then detected fluorescence in atomized elements excited by a hollow cathode lamp or a Xe arc lamp.14 Ideally, an atomizing device for AES or AFS (atomic fluorescence spectrometry) should have a high quantum efficiency and long retention time. In addition, the atomized sample should efficiently return to its ground state, the background signal from the detector should be small, and the equipment should be useful and economical. Both MPT and inductively coupled plasma (ICP) generate plasma on top of the flame; however, considering the abovementioned ideal characteristics, MPT has several advantages over ICP suchas a smaller size, a larger flow rate of gas and less power consumption.

In this study, we developed an MPT as an atomization and an excitation source for the quantitative and qualitative analysis of aerosol particles and measured the atomic emission from the sodium atom in the aerosol particles.

Fig. 1 shows a schematic diagram of the particle analyzer used in this research. Microwave plasma using Ar gas was generated by a 2.45 GHz power supply at the outputpower of 175 W for the stable plasma generation throughout the experiment. NaCl solution (2 μM) was sprayed and mixed with dry air in the dilution chamber. A tube attached to the dilution chamber was serially connected to a differential mobility analyzer (DMA) which separates particles based on their electrical mobility dependent upon each particle’s drift velocity which is determined by the mass of a particle when fixed electrical field is applied and then an Ar gas tube directing to the MPT. The size of the aerosol particles was selected by the DMA, which subsequently transferred the aerosol particles to the flame of the torch. To minimize the adsorption of the sample on the tube due to the static charge, a carbon-coated tube was used. The distribution of diameter of the diluted sample was independently identified using a scanning mobility particle analyzer (SMPA). SMPA is composed of DMA and a condensation particle counter and it is also based on the principle of the mobility of a charged particle in an electric field. Particles entering the system are neutralized (using a radioactive source) and then enter a DMA where the particles are classified according to electrical mobility, with only particles of a narrow range of mobility exiting through the output slit. This monodisperse distribution then goes to a condensation particle counter which determines the particle concentration at that size. The visible light emission at 589 nm from the sodium atom of the excited sample by MPT was collected by a lens positionedtoward bright the portion of the internal flame of the plasma and it was measured using a photomultiplier tube (PMT) attached to a monochromator. 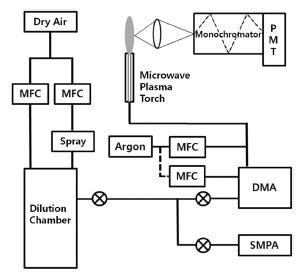 Aerosol particles of NaCl solution turned to high-energy sodium and chlorine atoms in the flame of MPT. The sodium atoms in the excited-state exhibited fluorescence at 589.0 nm and 589.6 nm as a result of the transition from the excited states (2P3/2 and 2P1/2) of sodium atom to the ground state (2S1/2). The emission intensity at 589.0 nm is twice as large as that at 589.6 nm. Fig. 2 shows a time-resolved emission kinetic profile measured at 589.0 nm obtained from the aerosol particles with a diameter 350 nm. The emission profile was obtained for several tens of milliseconds until the maximum emission intensity was twice the intensity of the noise signal. The emission from sodium atoms reached its maximum intensity within 1 μs and then disappeared within several tens of milliseconds, and the decay of the emission was an exponential function with respect to time regardless of the maximum intensity. Since the emission is generated when a particle reached to the region where the microwave is applied and the gas mixture of argon and dry air containing NaCl particles were moving continuously, the rise and decay time of the emission is mostly dependent of the velocity of a moving particle. However, the emission from sodium atoms was discontinuous because the sample exhibited fluorescence only when the sprayed NaCl aerosol particles, which were diluted with dry air, were introduced to the flame of the MPT. We believe that this measurement of an aerosol at a single-particle level can be achieved by the dilution of the sample. Fig. 3 shows how intensity varies with the mass of sodium in an aerosol particle. First, sodium aerosols were separated by DMA according to their size. Each data point in Fig. 3 represents the size of aerosol particles (450, 500, 550, 600, 650 nm). Then, the mass of the sodium is simply determined on the basis of the assumption that the aerosol particle was spherical and that the concentration of sodium in the aerosol was the same as that of the sodium in the NaCl solution (2 μM). As shown in Fig. 3, the intensity of emission from the sodium aerosols is linearly proportional to the mass of the sodium atom, which indicates that the size of the aerosol particles can be deduced from the emission intensity arising from the sodium aerosols. Fig. 4 shows the relative number distribution of the aerosol particle size measured by the scanning mobility particle analyzer (SMPA) (open circle) and the sodium atom emission frequency using PMT (solid circle), respectively. The shapes of the size distributions obtained by SMPA and MPT are similar, although the size distribution measured by MPT is ~100 nm larger than that measured by SMPA. The result of the measurement by SMPA indicates the existence of a larger number of small particles. This discrepancy can be ascribed to the low emission intensity from small particles having a diameter of less than 150 nm that were not detected by the PMT, resulting in an underestimation of the number of small aerosol particles. Even if the MPT coupled with AES underestimates the size of an aerosol particle, it has several advantages over SMPA. First, it is much less expensive than the combination of mass spectrometry and SMPA. Therefore, estimating approximate size of the particle as well as elemental information can be effectively achieved by MPT with less expensive equipment requirement. Second, MPT can be made portable, which is important for real-time aerosol monitoring system in the field-measurement. Thus, if highly sensitive detector such as avalanche photodiode is implemented, effective size estimation can be achieved by employing MPT coupled with AES. 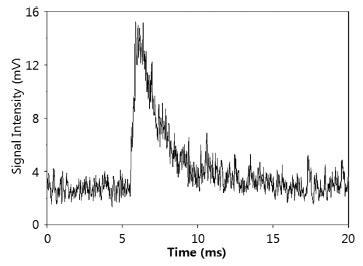 Fig. 2Fluorescence signal of a new particle from plasma torch. 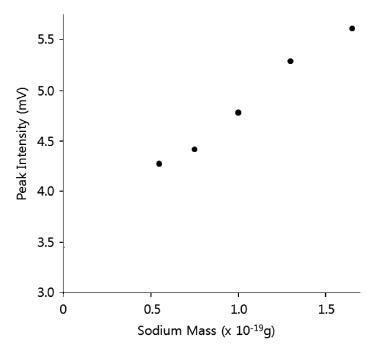 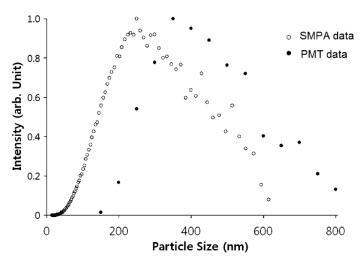