Fe/Al-MCM-41: An Efficient and Reusable Catalyst for the Synthesis of Quinoxaline Derivatives

Fe/Al-MCM-41was found to be an effective catalyst for the synthesis of quinoxaline derivatives from the condensation of the 1,2-diamines and 1,2-dicarbonyl compounds in good yields. The catalyst is recyclable and reusable.

Quinoxalines are important heterocycles in medicinal chemistry.1 Quinoxalines display a broad spectrum of biological activity2 which has made them privileged structures in combinatorial drug discovery libraries.3 They have also found applications as dyes,4a efficient electroluminescent materials,4b organic semiconductors,4c dehydroannulenes,4d cavitands4e and chemically controllable switches.4f They have been reported for their applications in dyes,5 pharmaceuticals,6 and have also been used as building blocks for the synthesis of organic semiconductors.7 Quinoxaline ring is a part of various antibiotics such as Echinomycin, Levomycin and Actinoleutin15 that are known to inhibit growth of gram positive bacteria and are active against various transplantable tumors.8 Despite remarkable efforts made in the last decade, the development of an effective method for the synthesis of quinoxaline ring is still an important challenge. A number of synthetic strategies have been developed for the preparation of substituted quinoxalines.9-12 Most common method is the condensation of aromatic 1,2-diamine with 1,2-dicarbonyl compound in refluxing ethanol or acetic acid.13 However, many improved methods have been reported for the synthesis of quinoxalines using catalytic amounts of various metal precursors such as Pd(OAc)2, RuCl2-(PPh3)3-TEMPO, MnO2, acids and zeolites.14 In addition, microwave,15 solid phase synthesis,16 bicatalyzed (bismuth and copper) oxidative coupling of peroxides and ene-1,2-diamines17 were also reported. Very recently, molecular iodine was used as catalyst for the synthesis of quinoxaline derivatives by Shivaji et al.18a in acetonitrile medium and by Rajesh et al.18b in dimethyl sulfoxide medium.

Many of these methods suffer from one or more limitations such as harsh conditions, low yields, long reaction times, critical product isolation procedures and co-occurrence of several side products. The main disadvantage of the existing methods is that the catalyst cannot be recovered and reused. Hence, there is still a need to develop improved methods for the synthesis of quinoxaline derivatives paying attention to avoid toxic reagents, economic viability and operational simplicity. In connection with our recent interests aimed at the development of efficient protocols for the preparation of biological active heterocycles,19 we herein report an efficient method for the synthesis of quinoxaline derivatives from the condensation of the 1,2-diamines and 1,2-dicarbonyl compounds in good yields (Scheme 1).

Since the discovery of mesoporous molecular sieves MCM-41 by Mobile20 in 1992, it has attracted considerable attention for its potential use in catalytic reactions. The main characteristics of this material is large surface areas and very narrow pore size distributions.21,22 In fact, it has a space enough to accommodate the guest molecules that are used in catalytic reactions.23,24 They have attracted the attention of many researchers. Molecular sieves are widely used in acid catalyzed reactions for the production of petrochemicals and fine chemicals. The incorporation of trivalent atoms (Al, Fe) into the walls of MCM-41 creates Brønsted acid sites and allows the preparation of materials with various acidity, which possess different catalytic and adsorptive properties.25,26 Iron-loaded MCM-41 materials are remarkable for their molecular and electronic diversity and have quite significance in many areas e.g. catalysis, medicine, material science etc. These ironloaded MCM-41 materials have received much attention because of their redox properties and unusual activity in organic reactions,27,28 which shows higher acidity compared to conventional mineral acids,29 and Lewis acids.30 The use of iron-loaded mesoporous materials as catalyst can also eliminate the hurdles like pore size constraint, recyclability, and thermal and hydrothermal stability posed by other support materials. In our attempts to develop new catalyst systems, we are selected Fe/Al-MCM-41as a new catalyst for the synthesis of quinoxaline derivatives.

In a typical procedure, o-phenylenediamine (1 mmol) and benzil (1 mmol) in the presence of a catalytic amount of Fe/Al-MCM-41 in CH3CN at reflux temperature for 10 min afforded the desired quinoxaline (3a) in 96% yield (Entry 1, Table 1). 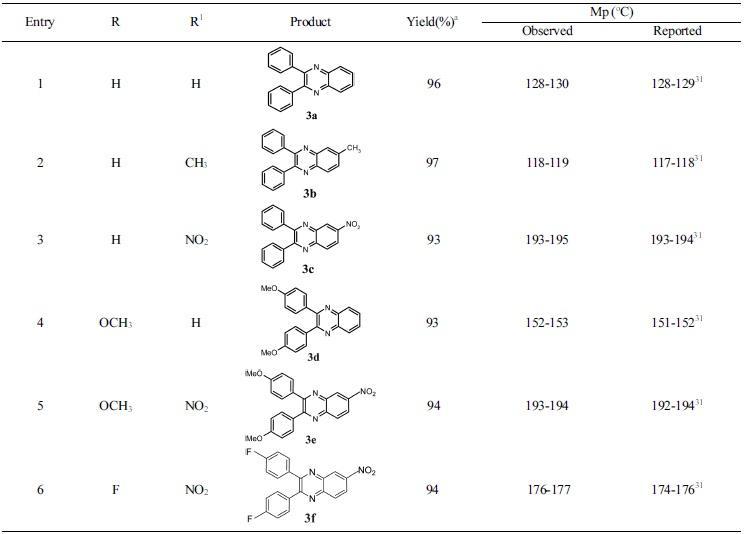 In order to show the generality and scope of this new protocol, we used various 1,2-diamine and 1,2-dicarbonyl compounds in the presence of Fe/Al-MCM-41, and the results are summarized in Table 1. Most of the reactions proceeded very cleanly at reflux temperature and no undesirable side-reactions were observed. The variations in the yields were very little and both substituted aromatic diamines such as 4-nitro and 4-methyl gave the condensed products in excellent yields with substituted 1,2-diketones.

We performed the effect of various solvents on the synthesis of 3a. This reaction was carried out in various solvents such as CH3CN, Ethanol, CH2Cl2, chloroform, and DMSO, and the best solvent was CH3CN in terms of yield and time, as shown in Table 2.

We found that the reaction was slow in the absence of catalyst to provide the products in moderate yields after long reaction times. We also compared synthesis of uinoxalines over bimetallic (Fe and Al) substituted MCM-41 in comparison to Al-MCM-41 and MCM-41 as shown in Table 2. It is obvious that the best yield was achieved with Fe/Al-MCM-41.

Next, we investigated the reusability and recycling of Fe/Al-MCM-41. At the end of the reaction, the catalyst could be recovered by a simple filtration. The recycled catalyst could be washed with methanol and subjected to a second run of the reaction process. To assure that catalysts did not dissolve in methanol, the catalysts were weighed after filtration and drying, and it turned out that the catalysts are not soluble in methanol. In Table 3, efficiency of Fe/Al-MCM-41 in synthesis of 3a for the five runs is reported. As shown in Table 3, the first reaction using recovered Fe/Al-MCM-41 afforded similar yield to those obtained in the first run. In the second, third, fourth and fifth runs, the yield were gradually decreased.

In order to show the merit of the present work in comparison with some reported protocols, we compared the results of the synthesis of 3a (entry1 in Table 1) in the presence of several catalysts with respect to the reaction times (Table 4). The best condition was obtained in the presence of Fe/Al-MCM-41.

All products are known compounds and were characterized by mp, IR, 1H NMR and GC/MS. Melting points were measured by using the capillary tube method with an electro thermal 9200 apparatus. 1H NMR spectra were recorded on a Bruker AQS AVANCE-300 MHz spectrometer using TMS as an internal standard (CDCl3 solution). IR spectra were recorded from KBr disk on the FT-IR Bruker Tensor 27. GC/MS spectra were recorded on an Agilent Technologies 6890 network GC system and an Agilent 5973 network Mass selective detector. Thin layer chromatography (TLC) on commercial aluminum-backed plates of silica gel, 60 F254 was used to monitor the progress of reactions. All products were characterized by spectra and physical data.

To a mixture of an appropriate o-phenylenediamine (1mmol) and a 1,2-dicarbonyl compound (1 mmol) in CH3CN (5 mL) a catalytic amount of MCM-41 (0.1 g) was added and the mixture was heated in oil bath for 10 min. The progress of the reaction was monitored by TLC. After completion of the reaction, CH3CN was removed under reduced pressure then diethylether was added to the solidified mixture in order to separation of catalyst from the mixture since the catalyst is not soluble in organic solvent. The residue was then diluted with 5% NaHCO3 (5 mL) and the product was extracted with diethyl ether (2×5 mL) and dried over MgSO4. The solvent was evaporated under reduced pressure and the pure product was obtained without any further purification.

Al-MCM-41 (Si/Al=100, 50 and 25) samples were synthesized hydrothermally using a gel composition of SiO2: xAl2O3:0.2CTAB:0.89H2SO4:120H2O (x varies with Si/Al ratio). Sodium metasilicate and aluminium sulphate were used as the sources for silicon and aluminium, respectively. Cetyl trimethyl ammonium bromide (CTAB) was used as the structure directing agent. In a typical synthesis, 10.6 g of sodium metasilicate in water was combined with appropriate amount of aluminium sulphate in distilled water and the pH of the solution was adjusted to 10.5 with constant stirring to form a gel. After 30 min, an aqueous solution of CTAB was added to it and the mixture was stirred for 1 h at room temperature. The suspension was then transferred into a 300 ml stainless steel autoclave, sealed and heated in a hot air oven at 160 ℃ for 48 h. After cooling to room temperature, the product formed was filtered, washed with deionised water and dried. Fe/Al-MCM-41 were synthesised by adopting the same procedure in which ferric nitrate was used as the source for iron. The dried materials were calcined at 550 ℃ for 1 h in nitrogen atmosphere and 5 h in air in order to maintain the crystallinity. The calcined materials were converted into H-form by repeated ion-exchange with aqueous 1M NH4Cl solution followed by calcination at 550 ℃ for 5-6 h.

In summary, we describe a simple, efficient, and ecofriendly method for the synthesis of quinoxalines from various 1,2-diketones and 1,2-diamines using inexpensive and readily available Fe/Al-MCM-41 as a catalyst. The ambient conditions, good product yields, easy workup procedure and minimal environmental impact make it a useful and attractive process for the synthesis of these compounds.