HER2 induces expression of leptin in human breast epithelial cells

A close association between the obesity hormone leptin and breast cancer progression has been suggested. The present study investigated the molecular mechanism for enhanced leptin expression in breast cancer cells and its functional significance in breast cancer aggressiveness. We examined whether leptin expression level is affected by the oncoprotein human epidermal growth factor receptor2 (HER2), which is overexpressed in ~30% of breast tumors. Here, we report, for the first time, that HER2 induces transcriptional activation of leptin in MCF10A human breast epithelial cells. We also showed that p38 mitogen-activated protein kinase signaling was involved in leptin expression induced by HER2. We showed a crucial role of leptin in the invasiveness of HER2-MCF10A cells using an siRNA molecule targeting leptin. Taken together, the results indicate a molecular link between HER2 and leptin, providing supporting evidence that leptin represents a target for breast cancer therapy.

Breast cancer is one of the most frequent types of cancer among women (1), and metastasis is the major cause of mortality in patients with breast cancer. Metastasis and invasion require matrix-degrading activities mainly exerted by matrix metalloproteinases (MMPs) (2). Our previous studies revealed key roles of MMP-2 and MMP-9 in the induction of breast cell invasion (3-5). Mounting evidence suggests a correlation between obesity and breast cancer risk. Obesity has been related to high breast cancer risk in postmenopausal women (6), and obese patients with breast cancer show larger, more advanced tumors, and aggressive cancer pathological factors, including lymph node metastases, advanced tumor stage, and high grade compared to those in non-obese patients (7).

Leptin is a 16 kDa circulating peptide hormone secreted mainly from adipose tissue (8). Although the main function of leptin is to control energy balance and food intake via hypothalamic-mediated effects (9,10), accumulating evidence suggests that leptin is involved in carcinogenesis, particularly in breast cancer (6,11,12). Leptin and the ObR leptin receptor, which are overexpressed in breast tumors, correlate with worse prognosis and poor survival of breast cancer (6,13). A recent study on human placental cells revealed that 17β-estradiol increases leptin expression in which membrane-associate estrogen receptor (ER)-α is involved (14). Leptin expression is enhanced under hyperinsulinemia and hypoxic conditions in MCF-7 breast cancer cells (15).

Human epidermal growth factor receptor 2 (HER2), also called Neu or ErbB2, is overexpressed in about 30% of breast tumors (16). HER2 overexpression correlates with poor prognosis because it enhances invasive and metastatic phenotypes (16,17). We have previously shown that HER2 induces an invasive phenotype in human breast epithelial cells (18). Leptin induces proliferation of breast cancer cell lines in relation to ER status as well as to the presence or absence of HER2 (19).

Despite accumulating data supporting a close relationship between leptin and breast cancer progression, limited information is available on the molecular mechanism for enhanced leptin expression in breast cancer cells and its functional significance in breast cancer aggressiveness. In the present study, we found that leptin gene expression was increased markedly by HER2 in MCF10A human breast epithelial cells. We further elucidated the functional significance of leptin in the HER2-induced invasive phenotype of breast cells.

HER2 induces expression of leptin by transcriptional activation

Immunoblot analyses to detect leptin were performed on HER2-overexpressing MCF10A cells to investigate the effect of HER2 on leptin expression (18). HER2 overexpression was confirmed by immunoblot analysis (Fig. 1A). Leptin protein level increased markedly in HER2-MCF10A cells compared to that in parental MCF10A cells (Fig. 1B), demonstrating that HER2 induces leptin expression in MCF10A cells. A reverse transcription-polymerase chain reaction (RT-PCR) analysis showed that leptin mRNA level was increased significantly by HER2 (Fig. 1C), indicating that HER2 upregulated leptin at the transcriptional level.

The invasive phenotype induced by HER2 requires leptin expression

Leptin promotes growth, migration, invasion, and angiogenesis of breast cancer cells (6,23), and leptin enhances invasion and migration of breast cancer cells through crosstalk with insulin-like growth factor-1 (24). We performed an in vitro invasion assay in HER2-MCF10A cells in which leptin expression was knocked-down by an siRNA targeting leptin to investigate the functional significance of leptin in the HER2-induced invasive phenotype of MCF10A cells. Leptin knockdown was confirmed by immunoblot analysis (Fig. 3A, left) and RT-PCR analysis (Fig. 3A, right). Invasiveness was inhibited by 49.3% in HER2-MCF10A cells in which leptin was knocked-down by siRNA (Fig. 3B). These results demonstrate that leptin plays a crucial role in the induction of breast cell invasion by HER2. 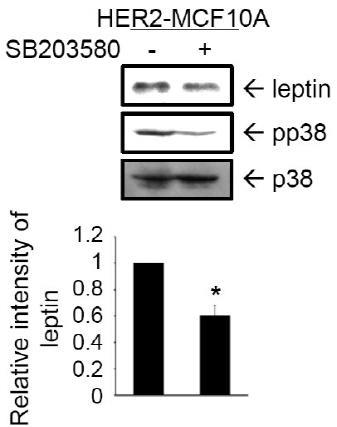 Fig. 2.p38 MAPK is required for leptin expression induced by HER2. HER2-MCF10A cells were pretreated with 50 μM SB203580 for 24 hr. Expression of leptin, phosphorylated p38 (pp38) MAPK, and total p38 MAPK were detected in cell lysates by immunoblot analysis. Band intensities were quantified and plotted. The results are means + S.E. triplicates. *Statistically different at P ＜ 0.05.

Among MMPs, MMP-2 is regulated by leptin in adult cardiac fibroblasts (25) and in rat glomerular mesangial cells (26). Our previous study showed that HER2-induced invasion of MCF10A cells involves MMP-9 (18). We next investigated the role of leptin in MMP-2 and/or MMP-9 expression. A gelatin zymogram assay was performed to detect MMP-2 and MMP-9 in HER2-MCF10A cells transfected with an siRNA targeting leptin. As shown in Fig. 4, levels of both MMP-9 and MMP-2 decreased significantly following leptin knockdown. These data demonstrate an essential role for leptin in MMP-2 and MMP-9 expression in HER2-MCF10A cells. 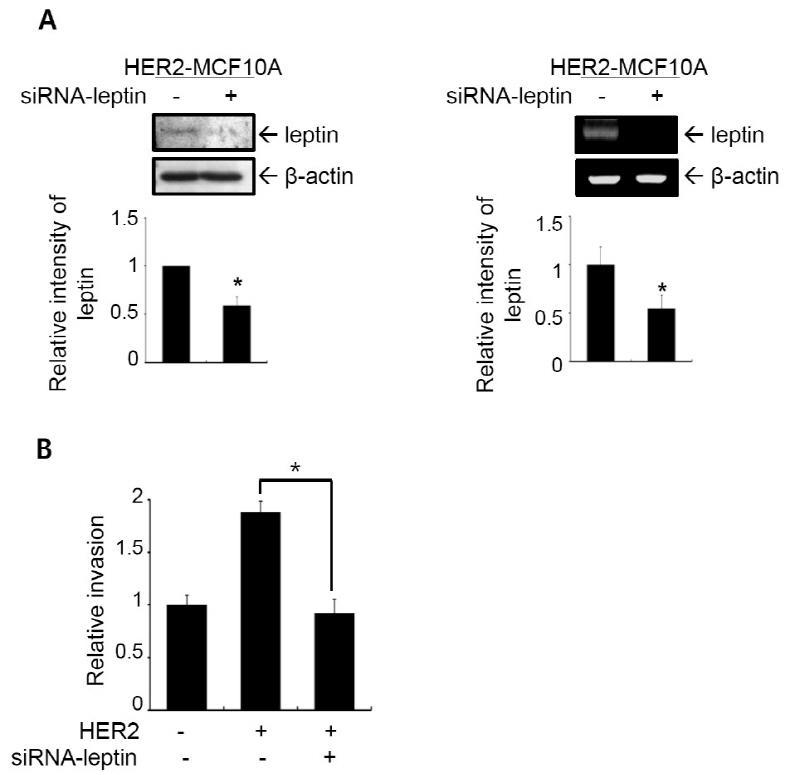 Fig. 3.Invasive phenotype induced by HER2 requires leptin expression. (A) HER2-MCF10A cells were transfected with control siRNA or siRNA targeting leptin. Leptin knock-down was confirmed by immunoblot analysis (left) and RT-PCR analysis (right). Band intensities were quantified and plotted. The results are means + S.E. of triplicates. *Statistically different at P ＜ 0.05. (B) Cells were subjected to the in vitro invasion assay. The number of invaded cells per field was counted (×400) in 13 arbitrary visual fields. The results represent means + S.E. of triplicates. *Statistically different from control at P ＜ 0.05. 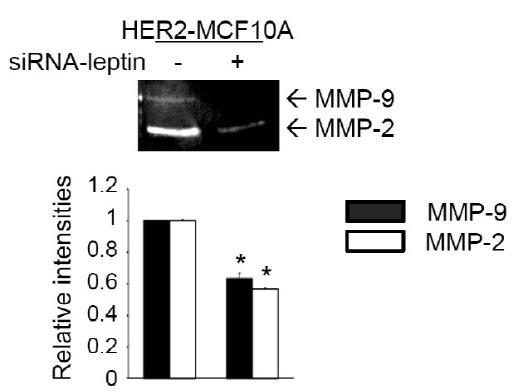 Fig. 4.Leptin plays a crucial role in the expressions of MMP-2 and MMP-9 in HER2-MCF10A cells. HER2-MCF10A cells were transfected with control siRNA or siRNA targeting leptin. Conditioned media were collected, and gelatinolytic activities of secreted MMP-2 and MMP-9 were determined by gelatin zymogram assay. Band intensities were quantified and plotted. The results are means + S.E. of triplicates. *Statistically different at P ＜ 0.05.

The sequences of the leptin sense and antisense primers were 5'-CTGTGCCCATCCAAAAAGTCC-3' and 5'-CCCCCAGGCTGTCCAAGGTC-3', respectively. The sequences of the β-actin sense and antisense primers were 5'-ACTCTTCCAGCCTTCCTT-3' and 5'-TCTCCTTCTGCATCCTGTC-3', respectively. We used the experimental conditions for the reverse transcription and thermocycler as described previously (6).

The in vitro invasion assay was performed using a 24-well Transwell unit with polycarbonate filters (Corning Costar, Cambridge, MA, USA), as described previously (29). The lower side of the filter was coated with type I collagen, and the upper side was coated with Matrigel (Collaborative Research, Lexington, KY, USA). The lower compartment was filled with serum-free medium containing 0.1% BSA. Cells were placed in the upper part of the Transwell plate, incubated for 17 hr, fixed with methanol, and stained with hematoxylin for 10 min followed briefly by staining with eosin. The invasive phenotypes were determined by counting the cells that migrated to the lower side of the filter by microscopy at 400×. Thirteen fields were counted for each filter, and each sample was assayed in triplicate.

Cells were cultured in serum-free DMEM/F12 medium for 24 hr. Gelatinolytic activity of the conditioned medium was determined by the gelatin zymogram assay, as described previously (27).