In this study we present a new approach for computing the partial atomic charge derived from the wavefunctions of molecules. This charge, which we call the "y_charge", was calculated by taking into account the energy level and orbital populations in each molecular orbital (MO). The charge calculations were performed in the software, which was developed by us, developed using the C# programming language. Partial atomic charges cannot be calculated directly from quantum mechanics. According to a partitioning function, the electron density of constituent molecular atoms depends on the electrostatic attraction field of the nucleus. Taking into account the Boltzmann population of each MO as a function of its energy and temperature we obtain a formula of partial charges.

The partial atomic charge is a fundamental concept in the molecular modeling of chemical systems and defines the identity of a molecule. Partial atomic charges are considered as an extremely powerful tool to describe chemical reactivity, physical properties and the biological activity of molecules.1-4

There exist several different methods for deriving partial charges. Some of these methods are purely empirical, making use of experimental quantities (e.g. enthalpy of vaporization, density of liquids, or crystal properties),5-10 whereas many current methods employ quantum mechanics. A good overview of partial atomic charges and the different procedures to derive them has been given by Wiberg and Rablen.11 Truhlar et al. reported the partial atomic charges calculated with the Mulliken and Löwdin schemes for a wide variety of systems in their effort to develop the redistributed Löwdin population analysis (RLPA).12 Although straightforward, the resultant charges from a Mulliken analysis have been shown to be highly basis set dependent, and are unsatisfactory for deriving electrostatic potentials and intermolecular interaction energies.13 Other partitioning protocols, which are less basis set dependent, include modifications to the Mulliken approach,14 as well as Löwdin population analysis15 and natural population analysis.16

The shielding constant is simply a way of expressing the net outcome of nuclear attraction and the electronic repulsions in terms of a single equivalent charge at the center of the atom. Because the shielding constant in its ground state is different for each atom type, they have different levels of attraction on the electrons in the outermost shell of an atom, which are called the CSMC electrons.

If an electron is at a distance r from the nucleus, it experiences a Coulombic repulsion that can be represented by a point negative charge placed at the nucleus and is equal to the magnitude given by the integral over the electron density. The distribution of electrons around a molecule may depend upon the spatial configuration of its nuclei. An electron close to the core causes the potential to decay with distance more sharply than an electron far from the core. The shielding in an electrostatics problem is taken into account by replacing the Coulomb potential by the shielded Coulomb potential, an expression of the form where rD is called the Debye length and r, is the distance of the electron from nucleus.18 Because the electrons, inside the inner shell sphere (the core electrons), contribute to shielding for the outermost electrons of the atom, the atoms with different configurations and types apply different power on them. The coefficients at each energy level of the MOs are obtained from the power of the core attracting the outermost electrons. The attractive power of the core is defined by the difference in positive charge between the nucleus and partial negative charge in the r radius. The extent of coefficients derived from wavefunctions of molecules is responsible for the partial atomic charge and is balanced by the core’s attraction. The Coulomb potential between the core and high-energy electrons in the MO is shielded by the Coulomb potential arising from low-energy electrons. According to Boltzmann population analysis, the low coefficient of the low-energy orbital in may contribute to negative charge more than a high energy large coefficient. The larger the coefficients of the low energyorbitals, the larger the total negative charge of the atom as a whole. 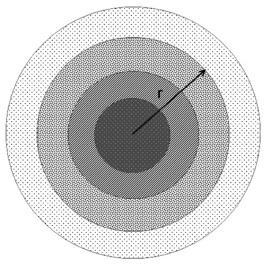 Fig. 1.An electron at a distance r from the nucleus experiences a Coulombic repulsion from the total charge of the electrons within a sphere of radius r. The total number of electrons in a closed shell system, and in the outermost shell for a multiple-electron atom, is given by the integral over the electron density.

Quantum chemical calculations were performed using SPARTAN (v. 5.01).19 As output from the SPARTAN interface AM1 charges, are a set of Mulliken-type charges (STO-3G) derived from a semi-empirical quantum mechanical calculation, and are directly taken. Mulliken population analysis (MPA).20 Which assigns the entire electron density to atom-centered orbitals and natural population anal-ysis,21 is recognized to be both the most widely used and the most criticized method22,23 (Note that Mulliken and natural charges are identical at the semi-empirical level).

The y_charge was calculated from the CSMC in the MOs, derived from the valence electrons in atomic orbitals, and performed with software programs using the C# programming language.

Since the CSMC is used to generate the partial charges, it will be dealt with in the equation, taking of Boltzmann distribution into consideration.

In this study we compared our employed method to MPA method.

This is achieved in three steps:

First, to find the total density on each atom, we need to calculate the ξ according to Boltzmann population. The total electronic density on each atom is defined as the sum of production of both ξ and the coefficient square in the occupied MO. As regards the Boltzmann population analysis, ξ can often be used to regulate the coefficient corresponding to energy. This ξ is not constant from molecule to molecule.

For each electron in the occupied MOs the following equation can be written by ascribing it to the accumulated population, Pj, on j-atom. A potential energy on the electron in related MO (i+1) is between the attraction from the core and the repulsion from all low-energy electrons (i). This equation has the form

where the energy of MOs is labeled i, and the number of atoms j; the sums on the right are the accumulated population for all occupied MOs.

Although the e–(Ei+1/RT) equation shows Boltzmann expression, the e–ξ′{(Ei+1/RT)–(Ei/RT)} equation provides the Boltzmann population between two different energies of MO. At this stage we need to simplify the expression to avoid any awkward exponential terms. Taking ξ = ξ'/RT, we may write Eq. (2) as

An important feature revealed by this equation is that, as the difference |Ei+1−Ei| increases, the effect value of the atomic coefficient decreases. When the energy difference is large, the coefficients of high-energy MOs in proportion to those of the lower energy MOs contribute only slightly to the accumulated coefficient and have a reduced amount of partition.

This left us the task of finding a value for the exponential prefatory ξ, which we want to make as large as possible to use the effect of the energy. On the other hand, if we make it too large, the difference of the charge distribution will approach a high value, leading to hardly any freedom to distribute the charges over the other atoms and to numerical instabilities. Previous values, which we have varied between 0.02 and 1.0, are accepted with a value of 0.05. Therefore, inclusion of this term will involve an iterative procedure are varying until the resulting charges remain constant. We took as the “optimal” value the highest value which turned out to be 0.05. When using charges on the molecule, all calculations should result in charges of exactly zero, because they are neutral.

Next, from these populations of the j-atom in i-MO, a set of the atomic densities is defined; supposing that each valence electron in an atom occupies a MO. To find the partial atomic charge we must deal the value arising from difference between each proton in the nucleus and each valence electron.

Where natm is the number of the constituent molecular atoms. There is an electron number as well as a natm, if only one valence electron from one atom is taken into account. nHOMO is the maximum number of occupied MOs. Usually; nHOMO is greater than natm since any atom participating in the MO, except atoms like the H-atom, has more than one valence electron. The correction factor of (natm/nHOMO) is used to take the average of all occupied MOs. Thus, any atom with more than one valence electron contributes to the occupied MO as only one electron where the charge at i-energy level can be integrated from the difference between 1-proton and the electron density for the j-atom in Eq. (4). Firstly since the coefficient with the lowest energy level is directly affected by the core, the difference in the energies is not used, and the coefficient size is not changed. Thus, in the first term, the charge can be calculated for i=1. Then from the difference (qi+1,j) of the remaining core charge and electron density at the next energy level, the charge can be integrated using the energy levels. The equation of the partial atomic charge has the following form

A comparison was made between the values obtained by our method and those calculated by MPA. MPA is the most widely used quantum mechanical method for the derivation of partial atomic charges. In spite of its known weaknesses it is still very much in use. MPA, which is ill-suited to the handling of the overlap population, is heavily dependent on the coefficients in the basis set but not on energy. For an unambiguous comparison of the results of the two methods, a set of molecules was chosen for which both theoretical and experimental data were available in the literature. As experimental data24 C-1s core electron binding energies, obtained from Electron Spectroscopy for Chemical Analysis (ESCA) measurements, were preferred because they were known to depend directly on valence electron distribution. As theoretical data, values of the partial atomic charges of an MPA were chosen from the semi-empirical calculations. 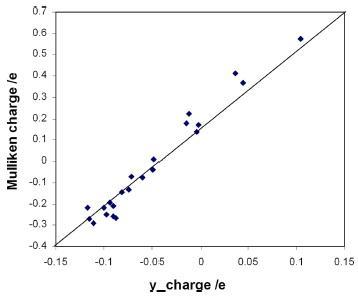 Fig. 2.Correlation of the partial atomic charges calculated with the Mulliken and y_charge. 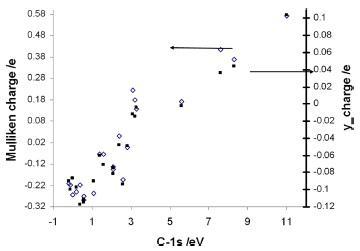 The variations of these charges, which were calculated by the two different methods, are illustrated in Figs. 2-3. Here the semi-empirical methods give relatively larger values for the Mulliken charges on the carbon atom, whereas our method gives consistently small values. The y_charge is more consistent over Mulliken charge. The generated charges were often surprisingly accurate, when compared to those derived from the more used MPA method. Considering just the semi-empirical values, Mulliken charges still show considerable dependence on the basis set employed, whereas y_charges depend not only on changes in the basis set but also on energy levels. In Table 1 the partial charge on the carbon bonding the H-atom reaches a negative value relative to the other carbon atoms due to the C-atom having more electronegativity than the H-atom.

To further explore the quality of the two sets of charge values, a comparison was made with the C-1s core electron binding energy shifts for the same set of compounds. ESCA shifts were those experimental data which were probably most closely related to valence electron distribution. y_charges gave a correlation with the ESCA shifts of 0.95. The MPA charges showed a correlation coefficient of 0.93 (Figs. 3). This study showed that the y_charges can reproduce the experimental data of C-1s ESCA shifts better than Mulliken charges. To calculate theoretically justifiable partial atomic charges for a variety of chemical species, y_charge model provides fast, convenient and reliable results. Finally, our partial atomic charges reproduced both the atomic and molecular charges exactly. 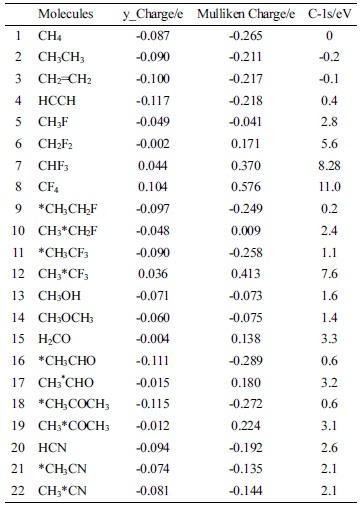