The anticorrosive effect of 3-Hydroxyflavone (3HF) in combination with quarternary ammonium bromide and iodide salts (QAB and QAI) for aluminium corrosion in NaOH medium was studied at the temperature range of 303K-323K using weight loss study, potentiodynamic polarization study and impedance spectroscopic measurements. The results revealed that the inhibition efficiency increases with the inhibitor concentration and it further increases on the addition of quarternary ammonium bromide and iodide salts. The enhanced inhibition efficiency of the inhibitor in the presence of quarternary ammonium salts may be due to synergistic effect. The adsorption process of 3HF on the aluminium surface obeys Langmuir's adsorption isotherm. The mechanism of adsorption is further supported by Scanning Electron Microscopic study (SEM).

Aluminium is an important subject of research because of its abundance and easiness in handling. In addition aluminium is justified by low price, high electrical capacity and high energy density.1 In order to control aluminuim corrosion, the main strategy is to effectively isolate the metal from the corrosive agents by the use of corrosion inhibitors. Inorganic substances like phosphates, chromates, dichromates and arsenates have been found to be effective corrosion inhibitors but they are toxic in nature. Organic compounds having high electron density at the hetero atoms have the corrosion inhibition efficiency due to the functional groups2-6 present in aromatic and heterocyclic rings along with electron-rich elements like nitrogen, sulfur and oxygen. Corrosion inhibition occurs via adsorption of the compounds on the corroding metal surface and the efficiency of the inhibition depends on the mechanical structural and chemical characteristics7 of the adsorbed layers. As a contribution to the current interest on eco- friendly corrosion inhibitors, the present study is focused on the inhibiting efficiency of 3HF on aluminium in NaOH medium. Reports on the effects of quarternary ammonium salts in combination with green inhibitors for corrosion inhibition of metals is very scanty.8-10 Therefore the synergistic effect of the additives namely QAB and QAI has also been studied. 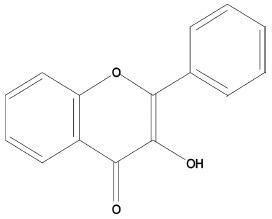 The aluminum specimens were abraded with emery paper of different grades before each experiment and washed with de-ionized water and degreased with acetone and dried with a stream of air.

The aluminium coupons with dimension 3.0×1.0×0.2 cm3 were used for weight loss studies. The coupons were weighed and the surface areas of all specimens were calculated before and after immersing them in 100 ml test solutions of NaOH with different concentrations for a time period of 2 hours. The weight loss studies were carried out at 303 K, 313 K and 323 K.

The inhibition efficiency was calculated from the corrosion rate11 using the following equation.

where CRblank and CRinh. are the corrosion rates in the absence and presence of the inhibitor.

The electrochemical measurements were carried out using a PRINCETON versa STAT Potentiostat-Galvanostat research instrument and a conventional three electrode cell set up. Aluminium was used as the working electrode with an exposed area of 1 cm2, saturated calomel as the reference electrode and platinum as the auxiliary electrode. All electrochemical measurements were carried out for the inhibited and uninhibited solutions. The Electrochemical impedance spectroscopy (EIS) measurements were performed at an open circuit potential after 15 minutes of immersion in the test solution with the amplitude of 10 mV. The covered frequency range was 30,000 Hz to 1 Hz. The impedance diagrams are given as Nyquist plots. Fig. 2 represents the electrical equivalent circuit for the ac impedance measurement. The charge transfer values (Rct) were calculated from the difference in the high frequency values. The capacitance of the double layer (Cdl) was estimated from the frequency ( f ) at which the imaginary component of the impedance (Z") is maximum and obtained using the following equation 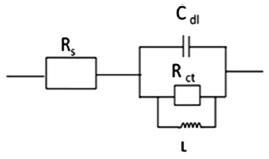 The potentiodynamic polarization (PDP) measurements were carried out at a sweep range from -1.7 V to -1.3 V. By the Tafel extrapolation method, electrochemical parameters like corrosion current density (Icorr) and corrosion potential (Ecorr). The percentage inhibition efficiency can be obtained from the electrochemical measurements using the following formulae

where Icorr. and Icorr. are the corrosion current densities without and with the inhibitor.

where Rct and R’ct are the charge transfer resistance values in the absence and presence of the inhibitor respectively.

The aluminium specimens were immersed in 1 M NaOH with an optimum concentration of the inhibitor and without the inhibitor for 2 hours. Then, they were removed, rinsed quickly with acetone and dried. The surface morphology was studied using a Hitachi Model S-3000H (Resolution- 3.5 nm) scanning electron microscope.

Table 1.Effect of temperature on the inhibition efficiency of 3HF alone and in the presence of quarternary ammonium salts on aluminium in 1 M NaOH by weight loss method 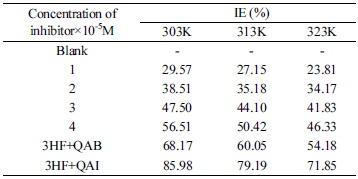 Table 2.Thermodynamic parameters for the inhibition of corrosion of aluminium in 1 M NaOH by 3HF

where R is the molar gas constant, T is the absolute temperature and 55.5 is the molar concentration of moles of water in mol/dm-3. Kads. is given by the following expression

where θ is the degree of surface coverage (Table 3). and C is the concentration of the inhibitor. The enthalpy of activation, ΔHoads. is another criterion from which the mode of adsorption can be probed. ΔHoads. was obtained by applying the transition state equation.

Table 3.Effect of 3HF alone and along with of quarternary ammonium salts on rate of corrosion and surface coverage for aluminium in 1M NaOH at 303 K 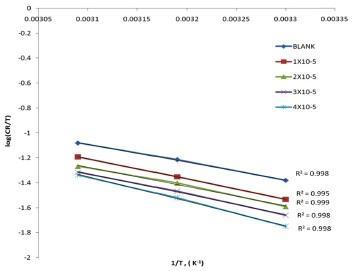 where CR is the corrosion rate, h the Planck’s constant, N the Avogadro’s number, ΔSo the entropy of activation, T the absolute temperature and R the universal gas constant. A plot of log (CR/T) against 1/T (Fig. 3) was made for the blank and different concentrations of the inhibitor. From the slope value, ΔHοads values were computed.

The anodic and cathodic polarization curves for aluminium in 1 M NaOH solution with and without the inhibitor are shown in Fig. 4 and 5. It is clear that both cathodic (hydrogen evolution) and anodic (metal dissolution) reactions of aluminium were inhibited with the increasing concentration of the inhibitor. The result suggests that it is a mixed type of inhibitor. The values of the polarization parameters (Icorr., Ecorr. and IE%) are listed in Table 4. As the inhibitor concentration increases, the Icorr. value decreases thereby increasing the inhibition efficiency. 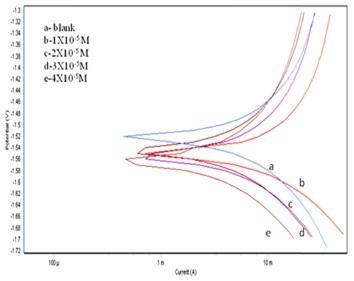 Fig. 4.Potentiodynamic polarization curves for aluminium in 1 M NaOH with and without the inhibitor at different concentrations. 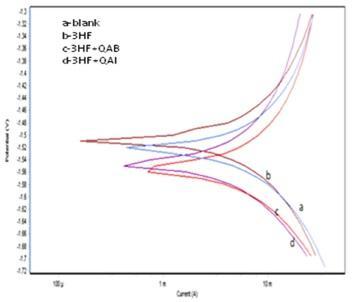 Table 4.Potentiodynamic polarization parameters for aluminum in 1 M NaOH with and without the inhibitor at different concentrations 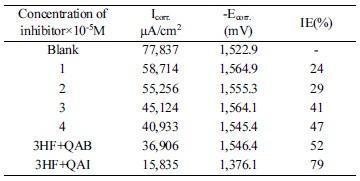 The EIS of aluminium in 1 M NaOH is summarized as Nyquist plots in Fig. 6 The plots clearly show that the addition of increasing amounts of the inhibitor causes an increase in electrochemical impedance.20 The Nyquist plots show three parts: the capacitive loop in the high frequency region, the inductive loop in the middle frequency region and the capacitive loop in low frequency region. The values of Rct, Cdl and IE(%) are given in Table 5. The complete inspection of the values shows that Rct values increases while Cdl values decreases with increase in the inhibitor concentration. This may be due to the increased surface coverage which led to an increase in IE(%). 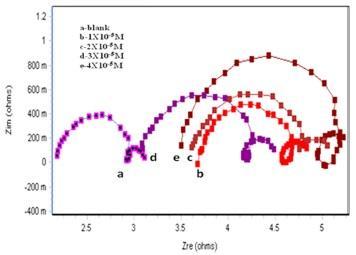 Fig. 6.Nyquist plots of aluminium in 1 M NaOH with and without the inhibitor at different concentrations.

Table 5.Corrosion parameters obtained from EIS measurements for aluminium in 1 M NaOH with and without the inhibitor at different concentrations

To ascertain the nature of adsorption of 3HF on aluminium in 1 M NaOH attempts were made to fit various isotherms such as Freundlich, Temkin, Langmuir and Frumkin. However the best fit was obtained (Fig. 7) only with Langmuir adsorption which supports the monolayer adsorption of the inhibitor on the aluminium surface. 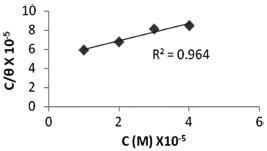 Table 6.Synergistic effect of QAB and QAI on the inhibition efficiency of 3HF (from weight loss studies)

The SEM images of aluminum were recorded (figs. 8 and 9) after immersion in 1 M NaOH with and without the inhibitor for a time period of 2 hours to establish the interaction of the organic molecules with the metal surface. The images of SEM confirm the changes in the surface morphology. In the absence of the inhibitor, extensive corrosion is suffered by the metal surface which is evident by the presence of hemispherical deep pits and corrosion products (fig. 8) which is due to the attack of the alkali on the surface. The specimen immersed in the alkali along with the inhibitor has a less corroded surface. This indicates that the inhibitor molecules hinder the dissolution of aluminium by forming an organic protective film on the metal surface and thereby reducing the rate of corrosion. 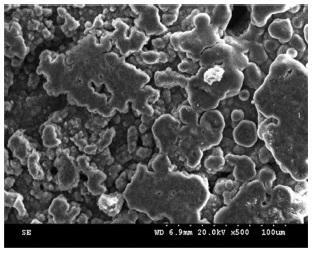 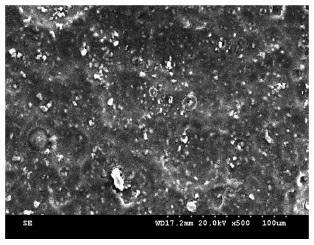