The kinetics of oxidation of nicotinic acid by peroxomonosulfate (PMS) has been studied in acetate buffers. Stoichiometry of the reaction corresponds to the reaction of one mole of the oxidant with a mole of nicotinic acid. NO product has been confirmed both by UV visible and IR spectroscopy. The reaction is second order viz. first order with respect to each reactant. Activation parameters have also been evaluated. A plausible reaction mechanism is mentioned and the derived kinetic rate law accounts for experimental observations.

Peroxomonosulfate (heretofore written as PMS) in aqueous solution to be HSO5- is an active ingredient of oxone. Oxone is a commercial name of this triple salt of potassium (2KHSO5·KHSO4·K2SO4). Oxone is a versatile and environmentally benign oxidant with wide applications such as bleaching, cleaning and disinfection agent.1 It has also been employed as an oxidant to degrade the pollutants. Co2+ is the most efficient catalyst of peroxomonosulfate to generate sulfate free radicals.2 The catalytic decomposition of PMS in the presence of transition metal ions such as Mn2+, Cu2+, Fe3+ Co2+ and biomimetic catalyst like ironporphyrin complex are also reported.3,4

Peroxomonosulfuric acid - a derivative of hydrogen peroxide when one of the hydrogens of the latter is replaced by sulfuric acid group.5-7 Thus it is this weak peroxide linkage (-O-O-) that undergoes cleavage during electron transfer reactions.8-15 However, such peroxocompounds are exceptionally sensitive to the traces of metal-ions as has been observed in trace metal-ion catalysis in large number of reactions of peroxo acids.16

These were the studies that stimulated our interest to explore kinetics of oxidation of nicotinic acid by PMS to understand its reducing properties which are hitter to least known. It is expected that its reactivity pattern in aqueous acid medium can provide additional information about the chemistry of this organic acid in particular and peroxomonosulfate in general.

Peroxomonosulfate (Aldrich) was employed as received. The solution of peroxomonosulfate was prepared by dissolving its potassium salt (K2SO5·KHSO4·K2SO4) in doubly distilled water. The solution of PMS was standardized both iodometrically and ceremetrically respectively and an impurity owing to KHSO4 or K2SO4 or both did not exceed more than 4%. However, the kinetic results were not affected by such an impurity. Efforts were also made to purify the salt but were not successful. Other reagents were either of AnalaR or guaranteed reagent grade and were employed as received. Doubly distilled water was employed throughout the study; second distillation was from alkaline permanganate solution in an all glass apparatus. Nevertheless, a few reactions were also carried out in tripply distilled water (redistilling of double distilled water in the presence of edta) to check trace metal-ion catalysis. Since trace metal-ion catalysis is reported in reactions of per-acid. However, catalysis of this type was not observed in this reaction under experimental conditions of the kinetics.

All the ingredients of the reaction except peroxomonosulfate were taken in glass stoppered Corning glass vessels which were suspended in a water-bath thermostated at ±0.1 ℃ unless specified otherwise. The reaction was initiated by adding temperature pre-equilibrated PMS solution into reaction mixture and the time of initiation was recorded when pipette was half emptied. The kinetics of the reaction was monitored iodometrically by withdrawing an aliquot (5 cm3) of the reaction mixture periodically and then discharging it in to ice-cold potassium iodide solutions (~10%). The liberated iodine was titrated against sodium thiosulfate solution using starch as an indicator.

Initial rates (ki, mol dm-3s-1) were computed employing plane mirror method. Pseudo first order plots were also made (Nic Acid is heretofore written for the nicotinic acid) wherever reaction conditions were such as [Nic. Acid] >> [PMS]. Results in triplicate were reproducible to within ±6%.

The oxidation product to be N-oxide of nicotinic acid to be N-Oxide was identified by U.V.-visible spectrophotometric (Fig. 1) where observed λmax at 254 nm is characteristic of N→O product of nicotinic acid. The IR spectrum (Fig. 2) of the reaction mixture in KRS cell shows strong peak in the 1640-1680 cm-1 conforming the product. Thus the stoichiometric, UV-visible and IR spectral results confirm conversion of nicotinic acid to N→O form of nicotinic acid. Such a product is not unique in the light of the fact that the hydrogen peroxide being relatively much weaker oxidizing agent than PMS has limited conversion of tertiary amines to their N-oxides.23 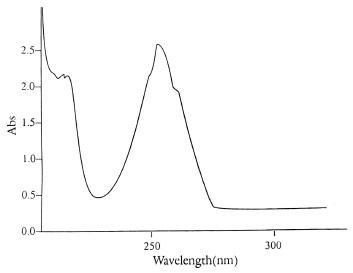 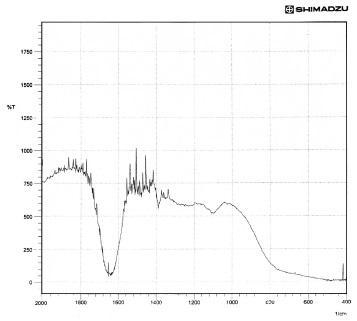 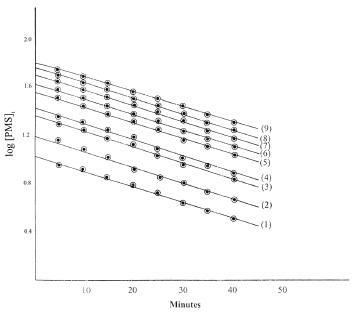 The pH variation was made by changing the composition of acetate buffers at fixed concentration of sodium acetate and also keeping concentrations of other reaction ingredients constant at 30, 35 and 45 ℃ respectively. The pH of the reaction mixture was checked employing digital pH meter prior to and after the reaction. The maximum change in pH was of 0.01 units. The rate, however, increases with increasing pH of the reaction.

The effect of temperature on the rate was studied at 30, 35 and 40 ℃ respectively and pH, 4.02 keeping constant concentrations of other reaction ingredients. 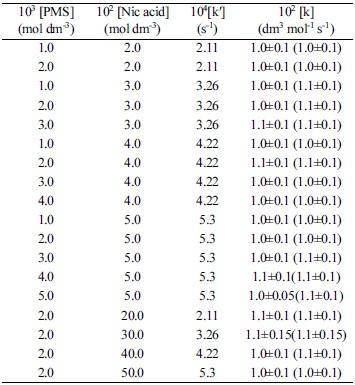 pK1 and pK2 of PMS, if, taken into account, HSO5- species is predominant at pH < 0 whereas SO52- species exhibits its predominance only at pH > 9. Therefore if pK1 and pK2 are any guide, the pH effect can not be co-related to PMS and SO52- species. Since, nicotinic acid is protonated under experimental conditions as in equilibrium (3), hydrogen ion dependence can be co-related to nicotinic acid and as such nicotinic acid appears to be the reactive species. Thus considering HSO5– and molecular form of nicotinic acid to be the reactive forms of oxidant and substrate respectively, the following reaction mechanism consisting of steps (3)-(5) can be envisaged to account for the experimental results.

Where [Nic acid] and [PMS] are the gross analytical concentrations of nicotinic acid and peroxomonosulfate respectively.

Since these values are of the order of pK1≃6, which is expected for such a weak acid like that of nicotinic acid.

The reaction species HSO5- is more reactive than SO52- species; the former is more electrophilic than the latter species. This involves nucleophilic attack of the nitrogen lone pair on the electrophilic peroxo oxygen of peroxomonosulfate species similar to SN2 type transition state as suggested earlier.14,16-18 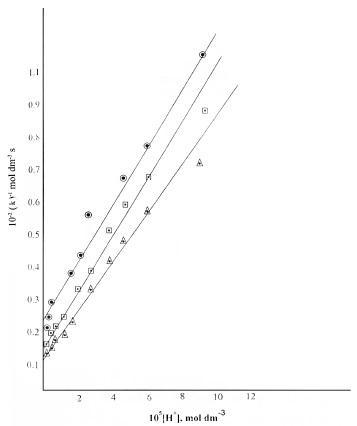 The reaction of nicotinic acid and peroxomonosulfate at acidic pH yields N→O nicotinic acid based on stoichiometric results and product analysis both by UV and IR spectral analysis.

The oxidation of nicotinic acid by peroxomonosulfate in acid medium exhibits second order viz. first order with respect to each reactant. Hydrogen ion retards the rate of the reaction and such retardation can be assigned to aciddbase equilibrium of nicotinic acid. The proposed mechanism accounts for the experimental observations and the rate law.