Thermophysical Properties of Acetophenone with Ethylchloroacetate at Temperatures of 303.15, 313.15 and 323.15 K

Densities, viscosities, refractive indices and speed of sounds of the binary mixtures of Acetophenone with Ethylchloroacetate were measured over the entire mole fractions at (303.15, 313.15 and 323.15) K. From these experimental results, excess molar volume , viscosity deviation , refractive index deviation , deviations in speed of sound , deviations in isentropic compressibility and excess intermolecular free length were calculated. The viscosity data have been correlated with the equations of Grunberg and Nissan, Hind et al., Tamura and Kurata, Katti and Chaudri, Sedgwick, Krishnan-Laddha and McAllister. The thermo physical properties under study were fit to the Jouyban-Acree model. The excess values were correlated using Redlich-Kister polynomial equation to obtain their coefficients and standard deviations. It was found that in all cases, the data obtained fitted with the values correlated by the corresponding models very well. The results are interpreted in terms of molecular interactions occurring in the solution.

The thermodynamic and transport properties of liquids and liquid mixtures1 are used to study the molecular interactions between the various components of the mixture and also to understand engineering applications concerning heat transfer, mass transfer, and fluid flow. In chemical process industries, materials are normally handled in fluid form, and as a consequence, the physical, chemical, and transport properties of fluids assume importance. Thus, data on some of the properties associated with the liquids and liquid mixtures like density, viscosity, refractive index and ultrasonic velocity find extensive application in solution theory and molecular dynamics.2 Such results are necessary for interpretation of data obtained from thermo chemical, electrochemical, biochemical and kinetic studies.3 Acetophenone is an important industrial chemical widely used as an ingredient of flavor and fragrance in soaps, detergents, cosmetics and perfumes. Ethylchloroacetate are used as a solvent in preparation of drugs, perfumes, cosmetics and pesticides. The acetophenone and ethylchloroacetate mixture is used as cosmetics, intermediates of drugs, perfumes, and pesticides. In our earlier paper, we had studied the transport properties of binary liquid mixtures.4,5 In continuation of this research, we have reported density (ρ), viscosity (η), refractive index (nD) and ultrasonic velocity (u) of pure acetophenone and ethylchloroacetate as well as for the binary system constituted by these two chemicals at temperatures of 303.15, 313.15 and 323.15 K. The viscosity values have been fitted to Grunberg and Nissan,6 Hind et al.,7 Tamura and Kurata,8 Katti and Chaudhari,9 Sedgwick,10 McAllister11 and Krishnan and Laddha model.12 The Jouyban-Acree model13 has also been extended to density, viscosity, refractive index and ultrasonic velocity of binary mixture. The deviation values have been fitted to Redlich-Kister type14 equation. Literature survey showed that no measurements have been previously reported for the mixture studied in this paper.

Acetophenone and ethylchloroacetate (Lobo Chemicals, India, and Mass fraction 0.998) were purified by using the methods described in the literature15,16 and only middle fractions were used in the experiment. Binary mixtures are prepared by mixing appropriate volumes of the liquid components in the specially designed glass bottles with air tight Teflon coated caps and mass measurements performed on a Shimadzu Corporation Japan type BL 2205 electronic balance, with a precision of ±0.01 mg. The required properties are measured on the same day immediately after preparing each composition. The uncertainty of the mole fraction is ±0.0001. The experimental values of density, viscosity, refractive indices and ultrasonic velocity for the pure liquids are compared, with the available literature values at T=303.15 K in Table 1.

Table 1.Comparison of experimental and literature values of acetophenone and ethylchloroacetate at 303.15 K

A double-arm pycnometer with a bulb of 25 cm3 and a capillary of an internal diameter of about 1 mm is used to measure the densities (ρ) of pure liquids and binary mixtures. The pycnometer is calibrated by using conductivity water (having specific conductance less than 1×10-6 ohm-1) with 0.9970 and 0.9940 g·cm-3 as its densities at T=(298.15 and 308.15) K, respectively. The pycnometer filled with air bubbles free liquids is kept in a thermostat with a thermal stability of ±0.01 K for over 30 min to attain thermal equilibrium. The precision of the density measurements was estimated to be ±0.0002 g·cm-3.

where the two constants a and b were obtained by measuring the flow time t of benzene.

Refractive indices were measured using thermostatically controlled Abbe refractometer with accuracy less than 0.0001 units. Water was circulated into the prism of the refractometer by a circulation pump connected to an external thermo stated water bath. Calibration was performed by measuring the refractive indices of doubly distilled water and propyl alcohol at defined temperatures. The sample mixture was directly injected in to the prism assembly of the instrument using a syringe. The solutions were pre thermo stated at the temperature of the experience before the experiments to achieve a quick thermal equilibrium.

The Speed of sound was measured by using a variable path, single crystal interferometer. (Mittal Enterprises, New Delhi) operating at a frequency of 2MHz, which was calibrated with water and benzene. The interferometer cell was filled with the test liquid, and the temperature of the solution was maintained constant within ±0.01 K by circulation of water from a thermostatically regulated water bath through the water jacketed cell. The uncertainty was estimated to be 0.1 ms-1. The isentropic compressibility was calculated by the equation

The experimental values of densities (ρ), viscosities (η), refractive indices (nD) and ultra sonic velocities (u) of acetophenone with ethylchloroacetate mixtures at various temperatures are listed in Table 2. Excess molar volumes VE are calculated from the measured densities (ρ) by using equation

where ρm is the density of the mixture and M1, ρ1, x1 and M2, ρ2, x2 are molecular mass, density and mole fractions of pure acetophenone (1) and ethylchloroacetate (2), respectively. The uncertainty in the measurement of VE was found to be ±0.0003 cm3 mol-1. The deviations in viscosities, Δη, are computed using the relationship

where η is the dynamic viscosity of the mixture and η1, x1 and η2, x2 are the viscosity and mole fractions of pure acetophenone (1) and ethylchloroacetate (2), respectively. The uncertainty in the measurement of Δη was found to be ±0.0001. The deviations of refractive index (ΔnD) over the entire mole fraction range are obtained by

ks1, ks2, and ks refer to the isentropic compressibility of components 1 and 2 and the mixture, respectively.

where Lf1 and Lf2 refer to the intermolecular free length of component 1 and 2.

The excess molar volumes, deviations of viscosity, deviations of refractive index, isentropic compressibility deviation and change of intermolecular free length were fitted to a Redlich-Kister14 equation of the type

where Y is either VE, Δη, ΔnD, Δu, Δks or ΔLf and n is the degree of polynomial. Coefficients Ai were obtained by fitting equation (9) to experimental results using a leastsquares regression method. In each case, the optimum number of coefficients was ascertained from an examination of the variation in standard deviation (S). S was calculated using the relation 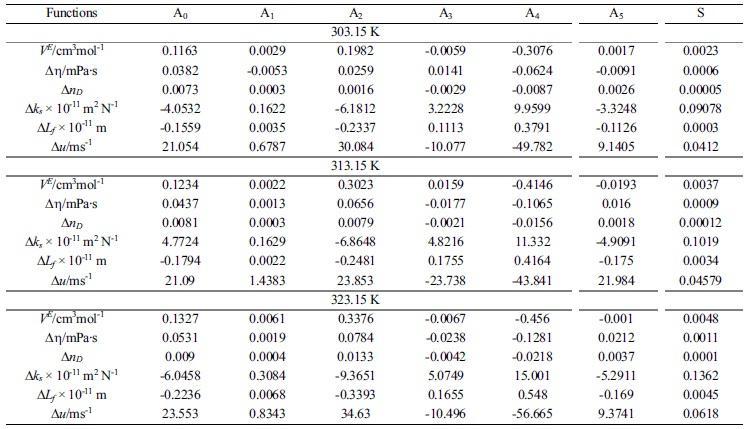 The excess molar volumes with the mole fraction (x1) of acetophenone and ethylchloroacetate at (303.15, 313.15 and 323.15) K are represented in Fig. 1. This shows that the excess molar volumes are always positive for all the studied temperatures. The sign of excess volume of a system depends on the relative magnitude of expansion/contraction on mixing of two liquids. If the factors causing expansion dominate the factors causing contraction, then VE becomes positive.17,26 The factors that are responsible for expansion in volume are as follows. (1) Loss of dipolar association (2) the geometry of molecules structure, which does not allow fitting of one component in to other component. (3) Steric hindrance, which opposes the proximity of the constituent molecules. The experiment in present investigation indicates that the factors which are responsible for expansion in volume are dominant over the entire composition range in all the studied temperatures of acetophenone with ethylchloroacetate. 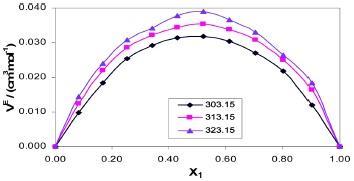 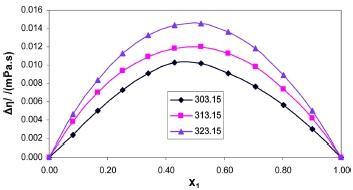 Viscosity deviations are positive over the entire range of composition for the binary mixture of acetophenone + ethylchloroacetate, which indicates that the interaction between binary mixtures is strong.27 Experimental values of mixture viscosities and the viscosities of their components are used to evaluate the interaction parameters of various models like G12, T12, H12, K12 and C values for the studied system are recorded in Table 6. The results of refractive index deviations versus x1 at (303.15, 313.15 and 323.15) K for the system of acetophenone and ethylchloroacetate are shown in Fig. 3. In Fig. 3, the positive values are observed for the system of acetophenone with ethylchloroacetate. 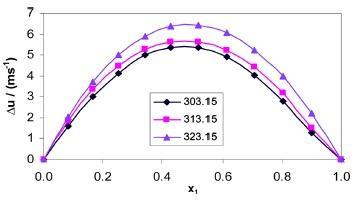 The system of acetophenone and ethylchloroacetate shows negative deviations through Δks isotherms over the entire range of mole fractions (Fig. 5) and exhibiting a clear minima at the mole fraction around x1=0.45, indicating that the maximum interactions are at that mole fraction range in every system. From Fig. 4, it is observed that Δu values are positive while values are negative. Such a trend of positive deviation in speed of sound and negative deviation in isentropic compressibility is quite common. The excess free length is negative over the whole mole fraction range for binary mixtures at different temperatures, Fig. 6. This indicates that due to intermolecular interaction, the structural readjustment occurs in the liquid mixtures towards the less compressible phase of fluid.23,24 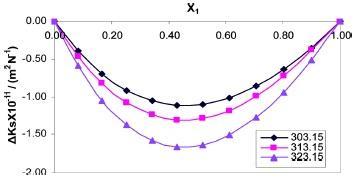 Experimental data of the density, viscosity, refractive index and ultrasonic velocity of acetophenone and ethylchloroacetate mixture have been measured at 303.15, 313.15 and 323.15 K. These data have used to compute the excess molar volumes, viscosity deviations, refractive index deviations, compressibility deviation and change in intermolecular free length for mixtures of acetophenone and ethylchloroacetate. Negative deviations were observed for Δks and ΔLf. The positive deviations were observed for VE, Δη, ΔnD and Δu. The results are analyzed in the sight of molecular interactions between the components. It may be concluded that the interactions resulting in the interstitial accommodation of ethylchloroacetate into acetophenone are the predominant factor over dipole-dipole interaction. The intermolecular interactions between acetophenone and ethylchloroacetate mixture lead to weak dispersive type. The viscosity data are correlated with the Grunberg and Nissan, Hind, Tamura and Kurata, Katti and Chaudri, Sedgwick, Krishnan- Laddha and McAllister. It has been concluded that the Jouyban Acree model is very well suited for correlating the thermo physical properties of the studied binary mixture.