Stroke is a representative disease that causes disabilities, which degrades the quality of life as a persistent obstacle to survivors [1], and causes problems in functional activities [2]. Stroke patients show approximately two times larger postural sway than healthy persons when they move their weight within the bearing surface. To overcome the resultant instability, they move their weight to the non-paretic side, consequently reducing their balance ability due to uneven weight distribution occurring [3] because they place only 25~43% of the load on the paretic side [4]. For functional rehabilitation, the asymmetric weight bearing of the lower limbs should be evaluated before gait training and even weight bearing of the lower limb on the paretic side should be induced [5]. Functional ability is an essential ability defined by individuals for creating a meaningful life and maintaining physical and psychological well-being [6]. Among functional abilities, gaits are the most frequently used method of all moving methods and account for a large part of daily living activities [7]. Most stroke patients show changes in temporal and spatial gait characteristics in comparison to healthy persons [8]. Among diverse therapeutic intervention methods for overcoming these unstable gait characteristics and reducing dependence on others in life, training using biofeedback has been recently reported as being quite effective on stroke patients [9]. Therapeutic interventions using biofeedback have advantages over other intervention methods such as relatively easier environment control and selection, the provision of training based on abilities through stepwise control of the level of task difficulty, the provision of fast and accurate sense feedback to task performance [10], and the provision of opportunities for selflearning in safe environments [11] Treatment using biofeedback is advantageous in that diverse environments can be provided to cause changes in sensory inputs thereby enhancing treatment effects for stroke patients [12], motivation for task accomplishment and active participation are enabled through diverse feedback mechanisms [13], and patients can be intensively trained on diverse target tasks necessary for the improvement of their functions [11]. Biofeedback plays important roles for patients with balance and gait disorders. The visual and perceptual elements of biofeedback have been said to be effective for stroke patients having difficulties in understanding the locational relationships between objects and spaces to improve balance and gait abilities [14]. Biofeedback has a weakness of being unable to appropriately control problems such as abnormal postural control occurring due to excessive effort required when tasks are performed and associative reactions. The purpose of the present study is to examine the effects of biofeedback postural control training on stroke patients' weight distribution rates and functional abilities in order to supplement the weakness of treatment using biofeedback.

The subjects of this study were selected from among the patients who were diagnosed with stroke between January and March 2013 at M hospital located in Mokpo. The present study was conducted with 30 stroke patients (18 males and 12 females) whose dates of onset of stroke were at least one year earlier. Stroke patients for over one year and within two years are 25 persons, stroke patients for over two year and within three year are 5 persons. The patients provided written informed consent after being given a full explanation of the purposes of this study and the contents of the experiment. The criteria for participation of the subjects were as follows. Those who could walk at least 10 m independently, had no musculoskeletal disease that could affect the experiment, had no damage to hearing, the vestibular nerves, or the eyeball, had no neglect symptoms, could understand and follow instructions, and had sufficient abilities for communication and understanding to follow instructions during evaluation with 24 points or higher scores in the Mini-Mental State Examination-Korean version (Table 1). 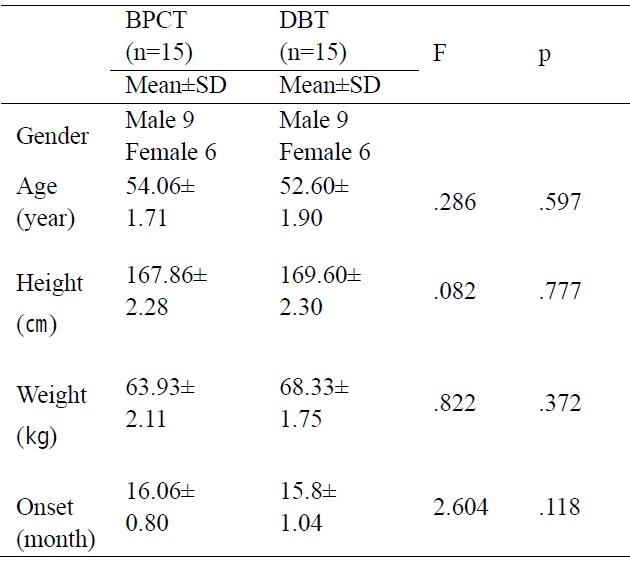 The study subjects received intervention by physical therapy for the nervous system that included muscle strengthening training and gait training for 30 minutes and the experimental group(n=15) additionally received biofeedback postural control training using Balance trainers (Medica Medizintechink GmbH, Germany) for 30 minutes while the control group(n=15) received dynamic balance training removed of biofeedback using Balance trainers. The intervention was given for 30 minutes per time, five times per week for six weeks. The balance trainer used in the biofeedback postural control training has a mechanical joint with a degree of freedom of two and is connected to the subject with knee pads that support the knee and a pelvic support that stabilizes the pelvis. The mechanical joint of the postural control training machine allows physiological movements of the standing person while the person performs tasks and provides feedback of the degree of movements on the screen of the monitor connected to the machine [Figure 1]. 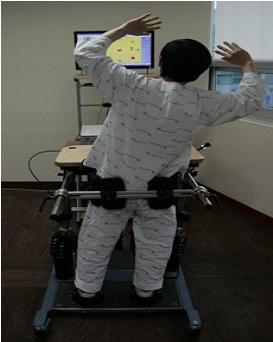 To measure functional abilities, timed 10 meter walking tests, timed up and go tests, and Berg Balance Scale tests were conducted. The timed 10 meter walking test is a test method of evaluating the gait velocity and balance of hemiplegic patients by measuring the time to walk a straight-line distance of 10 m which can be used as a scale of the recovery of mobility of hemiplegic patients [16]. The timed up and go test is for examining the dynamic balance ability and gait ability of hemiplegic patients. In this test, the time for the subject to stand up from a sitting position on a 46cm high chair with armrests laid on a flat floor, go 3 m, come back and sit on the chair again was measured three times and the average time was used [17]. Berg Balance Scale was developed by Berg K et al. [18] and can be used to objectively evaluate static and dynamic balance abilities. This scale is divided into three areas: sitting, standing up and postural changes. 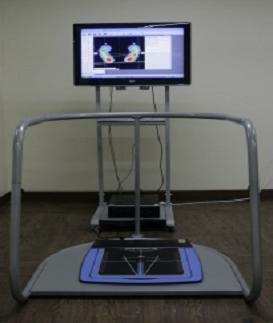 The data obtained in the present study were statistically processed using SPSS Windows 17.0. Analyses of covariance (ANCOVA) were conducted to compare weight distribution rates and functional abilities between different intervention methods. All the statistical significance levels used were 0.05. 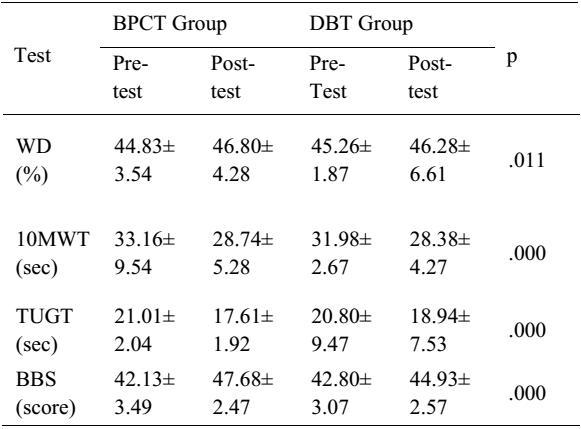