Ribes fasciculatum (Saxifragaceae) has been widely used as a traditional medicine for the treatment of cough, antidote, cold, lacquer poison, and sore throat. In the present study, we evaluated the anti-nociceptive effects of ethyl acetate fraction of Ribes fasciculatum (ERF) in mice. Test results of tail-immersion test and hot plate test revealed that the ERF had strong anti-nociceptive activities on thermal nociception in a dose dependent manner, indicating ERF's anti-nociception on the central pain. Moreover, the acetic acid-induced chemical nociception was also significantly reduced by ERF treatment. This result shows that ERF may also work on the peripheral pain. We further performed formalin test to confirm ERF's anti-nociceptive properties and found that pain responses were significantly decreased by ERF treatment. Interestingly, in the combination test with naloxone, the analgesic activity of ERF was not changed, indicating that the opioid receptor was not involved in the ERF-mediated anti-nociception. These results indicate that ERF might be possibly used as a painkiller for the treatment of nociceptive pains.

Pain is an unpleasant sensory and emotional experience associated with actual or potential tissue damage (IASP, 1979). Although pain is essential for the survival of an organism by enabling immediate awareness of actual or threatening injuries, chronic pain has adverse effects on well-being and quality of life that may be far reaching, resulting in reduced physical and emotional function. In order to manage this continuous nociception in the absence of a detectable stimulus, a number of opioids and non-steroidal anti-inflammatory drugs (NSAIDs) are available for clinical use. However, NSAIDs cannot be recommended to treat central nociception. Moreover, the opioids also have limits due to high potential for abuse and side effects (Kim et al., 2009). Therefore, many studies have focused on developing effective analgesic agents from medical plants with high efficiency and low toxicity (Calixto et al., 2000).

Ribes fasciculatum is a plant in a family of Saxifragaceae and distributed in Korea, Japan, and China. The twigs of this plant have been used as traditional medicine to treat cough, antidote, cold, lacquer poison, and sore throat. R. fasciculatum has been known to possess organic acids such as tartaric acid, citric acid, and malic acid (Kim et al., 2011). However, until now, pharmacological studies on this plant are extremely limited. In this regards, here in this study we investigated the anti-nociceptive properties of R. fasciculatum using various experimental pain models. In the present study, we evaluated central and peripheral analgesic activities of ethyl acetate fraction of R. fasciculatum (ERF) by performing tail immersion test, hot-plate test, acetic acidinduced writhing test, and formalin test. To validate whether ERF acts as an opioid agonist, we also carried out the combination test using naloxone, which is a nonselective opioid receptor antagonist.

Plant material – The twigs of R. fasciculatum were purchased from Hainyakupsa (Jeonbuk, South Korea) in March 2012. A voucher specimen (WH083) has been deposited at the Department of Oriental Pharmacy, College of Pharmacy, Woosuk University.

Extraction of plant material – An extract was obtained twice from the dried sample (3 kg) with 12,000 mL of MeOH under sonification for 2 h. The resultant methanolic extract was concentrated into 100.64 g (Yield : 3.021%) using a rotary evaporator. The sample was then subjected to successive solvent partitioning to give n-hexane (10.4 g), CH2Cl2 (8.5 g), EtOAc (5.4 g) and n-BuOH (24.1 g) soluble fractions. Each fractions were lyophilized and then stored at −20 ℃ until use. The preliminary experiments showed that among the four fractions, the EtOAc fraction (ERF) has the most potent pharmacological potential, and therefore, further studies were conducted using ERF.

Animals and drug administration – ICR mice (6 weeks old, males and females) weighing 20 - 25 g were supplied by Damul Science (Dajeon, Korea). All animals were housed at 22 ± 1 ℃ with a 12 h light/dark cycle and fed a standard pellet diet with tap water ad libitum. The experimental protocols complied with the recommendations of International Association for the study of pain (Zimmermann, 1983). Animals were randomly assigned into several groups, each consisting of 8 or 10 mice for analgesic tests. Negative controls were treated with the same volume of distilled water which was used for reconstitution. Positive controls were treated with standard drugs: tramadol (i.p.) or indomethacin (p.o.). Treatment groups in each test were treated orally with different doses of ERF.

Hot plate test – The hot-plate test (Franzotti et al., 2000) was carried out on groups of male and female mice using a hot-plate apparatus, maintained at 55 ± 1 ℃. Only mice that showed initial nociceptive responses (licking of the forepaws or jumping) between 7 and 15 s were used for the further experiment. The selected mice were pretreated with ERF (200, 400 mg/kg; p.o.) or vehicle (D.W) and the measurement was started. A tramadol (10 mg/kg; i.p.)-treated animal group was included as a positive control. The cut-off time was set at 30 s in order to minimize skin damages. The reaction time was calculated as described in tail immersion test.

Acetic acid-induced writhing test – Antinociceptive activity of ERF was detected as previously described (Olajide et al., 2000). The response to an intraperitoneal injection of acetic acid solution (1% in saline), consisting of abdominal constrictions and hind limbs stretchings, was measured for each mice, starting 5 min after acetic acid injection during the following 15 min period. Each experimental group of mice were treated orally with vehicle (D.W), ERF (200, 400 mg/kg) or indomethacin (10 mg/kg) 1 h prior to acetic acid injection.

Formalin test – In formalin test (Santos and Calixto, 1997), groups of mice were treated orally with vehicle (D.W) and ERF (200, 400 mg/kg). After 60 min, each mouse was given 20 μl of 5% formalin (in 0.9% saline, subplantar) into the right hind-paw. The duration of paw licking time (s) as an index of painful response was determined at 0 - 5 min (first phase, neurogenic) and 20 - 35 min (second phase, inflammatory) after formalin injection. Tramadol and indomethacin were used as a positive control drug, which was administrated at the dose of 10 mg/kg, i.p. and p.o. respectively. In order to examine the possible connection of endogenous opioids in the antinociceptive activity, tramadol, indomethacin and ERF were investigated in groups of mice pretreated with naloxone (5mg/kg; i.p.) 15min prior to drug administration.

Statistical analysis – All data were expressed as the mean ± S.E.M. Data was subjected to student's unpaired 2-tailed t-test and the p-values less than 0.01 were considered to indicate statistical significance.

Here in this work, we dissected the anti-nociceptive properties of ERF using various pain models in mice. First, ERF’s central antinociceptive activity was determined by thermal nociception models such as tail immersion test and hotplate test. We found that ERF had strong antinociceptive activities on both tests compared to tramadol, a reference drug (Fig. 1 and 2). These results demonstrate that the ERF exerts central anti-nociception via spinal and supraspinal analgesic pathways. Interestingly, tramadol reached maximum peak at 30 min, which was similar to the action of opioid agonists (e.g. morphine), whereas ERF showed highest analgesia level at 60 min after administration. This difference in the maximum analgesic point could be explained by the methods of drug administration (i.p or p.o.) or metabolic rate of each drug. 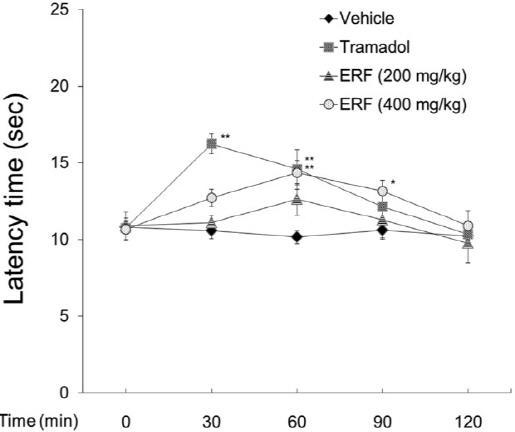 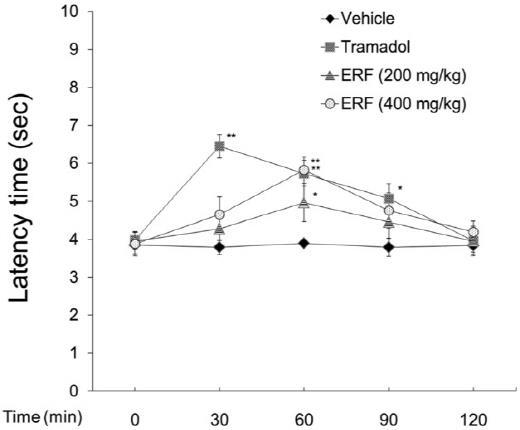 To test whether ERF can block the peripheral nociception, we performed acetic acid-induced writhing test which is frequently used to estimate both central and peripheral analgesic effects of drugs (Fukawa et al., 1980). The acetic acid-induced abdominal constrictions are associated with increased level of prostaglandins (PGs) in peritoneal fluids, which is largely associated to the development of inflammatory pain (Bley et al., 1998; Derardt et al., 1980). NSAIDs, such as aspirin and indomethacin exert their peripheral analgesic action via consequent inhibition of PG synthesis. In the present study, the acetic acid-induced abdominal constrictions were significantly diminished by ERF treatment in a dose dependent manner (Fig. 3). In addition, indomethacin, a reference drug, also produced a significant decrease in the writhing response through inhibition of PG synthesis. Since ERF attenuated the cyclooxygenase-2 (COX-2) expression in the activated murine peritoneal macrophages (Unpublished data), we speculate that ERF-mediated COX-2 inhibition resulted in decreased PG synthesis might be attributed to peripheral anti-nociception. 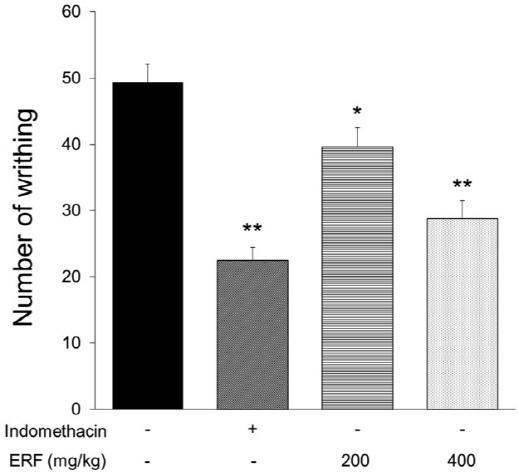 Last, we carried out formalin test to confirm the analgesic mechanism of ERF. The subcutaneous injection of formalin causes biphasic nociceptive responses involving two different mechanisms (Hunskaar et al., 1985). The early phase (neurogenic pain) caused by the direct chemical stimulation of nociceptive afferent C fibers which can be suppressed by opiates like morphine (Amaral et al., 2007). On the other hand, the late phase (inflammatory pain) is associated with the action of proinflammatory mediators such as PGs, serotonin, histamine and bradykinin in the peripheral tissues (Hunskaar et al., 1985). The results from this experiment demonstrated that tramadol, a central analgesic drug, was effective in preventing both the early and late phases of formalin-induced nociception, while indomethacin, a peripheral analgesic drug, suppressed the late phase. These results were quite reasonable, since many reports suggested that the drugs, which primarily act on the central nervous system inhibited equally in both phases, while peripherally acting drugs, such as steroids and NSAIDs are mostly can cause slight inhibition against the early phase of the formalin test (Vontagu et al., 2004; Hunskaar et al., 1985; Trongsakul et al., 2003). We found that the duration of the paw licking time was reduced obviously in both the first phase and the second phase by ERF treatment, representing its suppressive properties on neurogenic as well as the inflammatory nociception (Table 1). These data provided a further confirmation on the central analgesic effect of ERF which showed in the tailimmersion test and hotplate test. Moreover, in agreement with the results from the acetic acid test, ERF also displayed a significant peripheral analgesic activity. To address whether the opioid receptor was involved in the ERF-mediated anti-nociception, we performed a combination study using naloxone, a non-selective opioid receptor antagonist. Interestingly, naloxone could not block the ERF’s analgesic action in both phases, indicating that the opioid receptor was not required for the central and peripheral antinociceptive action of ERF. In summary, in this study we demonstrated that ERF had potent anti-nociceptive activities on both central and peripheral pains, independent of opioid receptor occupation. Based on these results, ERF might be useful in managing nociceptive pains as an effective anti-nociceptive agent.