N-doped microcuboids were successfully prepared by a simple one-pot hydrothermal method. The samples were characterized by X-ray diffraction, scanning electron microscopy, diffuse reflectance spectroscopy, and X-ray photoelectron spectroscopy. It was found that the N-doped microcuboids enhanced absorption in the visible light region, and exhibited higher activity for photocatalytic degradation of model dyes. Based on the experimental results, a visible light induced photocatalytic mechanism was proposed for N-doped anatase microcuboids.

Titanium dioxide (TiO2) is the most widely used photocatalytic material since it exhibits non-toxic nature, high efficiency, chemical inertness, relatively low cost, and photostability.1−4 However, the main drawback is that TiO2 photocatalysts can only be excited by ultraviolet (UV) light due to their wide band gap. Therefore, many studies have been devoted to the efficiency improvement of TiO2 under visible light illumination.5−7

Over the past twenty years, there has been extensive research into extending the absorption profile of TiO2 into the visible region by doping with main group elements, in particular with nitrogen. Nitrogen doping is one of the simplest synthetic methods to engineer a visible photocatalyst, and it can narrow the band gap of TiO2 to 2.6 eV, which consequently gives rise to visible light-driven photocatalytic activity.8 Since then, N-doped TiO2 have been prepared by various methods, including sol-gel method,9 chemical vapor deposition method,10 hydrothermal method11 and calcination in ammonia gas.12 Among them, the hydrothermal route is an ideal technique for synthesizing N-doped TiO2 nanomaterials with high purity, narrow particle size distribution, controlled morphology and high crystallinity.13 For example, Zhao14 and his coworkers prepared N-doped TiO2 hollow microspheres by a onestep hydrothermal method, and the prepared TiO2 microspheres showed excellent photocatalytic activities in degrading dyes under visible light irradiation. Liu et al.15 prepared N-doped TiO2 nanorods by a simple one-pot solvothermal method using hydrazine hydrate and TiO2 colloids as the starting materials, and the sample showed high catalytic activity of decomposing methyl orange and 4- chlorophenol under UV and visible light illumination. Despite that several studies have succeeded in the preparation of N-doped TiO2 nanoparticles with various morphologies, no report, so far, synthesized the N-doped TiO2 microcuboids with high visible light photocatalytic activity.

In this article, we report a facile way to obtain N-doped TiO2 microcuboids with high photocatalytic property under UV and visible light irradiation. It was proven that the prepared N-doped TiO2 microcuboids significantly enhanced the photo absorption abilities and photocatalytic activities as compared to those of TiO2 samples under the same conditions.

All reagents were analytical grade and used without further purification. In a typical procedure, 2.37 g titanium n-butoxide was dissolved into 15 mL of ethanol. 0.05 g sodium dodecyl sulfate (SDS) and 2 mL of ammonia were added into 5 ml of deionized water and stirring continued for 30 min. After sufficient mixing, the mixed solution was added drop wise into the titanium n-butoxide solution with constant stirring. Next, the autoclave was heated at 160 ℃ for 12 h and allowed to cool down naturally. The product was centrifuged, washed several times with distilled water and ethanol, and dried at 60 ℃ for 6 h. At last, the sample was then annealed at 450 ℃ for 3 h in air to prepare the final N-doped TiO2 microcuboids. For comparison, the TiO2 samples were prepared using the same method.

The phase of the as-prepared products was determined by a Rigaku D/Max 2400 X-ray diffractometer (XRD) equipped with graphite monochromatized CuKα radiation. The morphology of the as-synthesized products was observed directly by a JEOL JSM-5600LV scanning electron microscope (SEM) equipped with energy-dispersive X-ray spectroscopy (EDS). The UV-vis diffuse reflectance spectra (DRS) of the samples over a range of 200−800 nm were collected on a UV-2450 instrument.

The evaluation of photocatalytic activity of the prepared samples for the photocatalytic decomposition of RhB aqueous solution under 300 W mercury lamp as a UV source or 300 W Xe lamp served as a visible-light source with an ultraviolet cutoff filter, which allowed the transmission of visible-light with a wavelength longer than 420 nm (λ >420 nm). 50 mg photocatalyst was dispersed in a 50 mL aqueous solution of 1.0×10−5 M RhB. Before photodegradation, adsorption equilibrium of the dye on catalyst surface was established by mechanical stirring for 30 min. After solar irradiation for some time (30 min), the reaction solution was filtrated to remove the suspended particulates. Then, the concentration of RhB in solution was analyzed with an UV-visible spectrophotometer (UV-2550, Shimadzu, Japan).

The typical powders XRD patterns of TiO2 sample and N-doped TiO2 microcuboids are shown in Fig. 1. The crystal structures of the N-doped TiO2 powders represent the anatase phases (JCPDS, card no: 21-1272), which are similar to pure TiO2 sample. 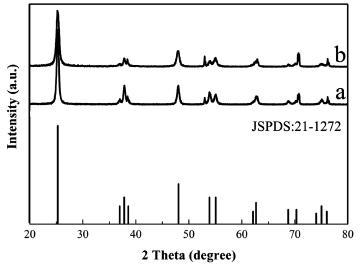 Figure 1.XRD patterns of TiO2 samples (a) and N-doped TiO2 microcuboids (b).

Fig. 2 shows typical SEM images of the N-doped TiO2 microcuboids fabricated by a one-pot hydrothermal method. As shown in Fig. 2a, the overall morphology of the sample indicates that there exists a great deal of uniform cuboidlike microstructures in high yield. The microcuboids are in the length of about 400 nm, in the width of about 300 nm and in the height of about 250 nm. The corresponding EDS of N-doped TiO2 microcuboids also demonstrates the presence of Ti, O and N, and the atomic ratio of the N is about 16%.

Fig. 3 shows the corresponding UV-vis diffuse reflectance spectra of pure TiO2 samples and N-doped TiO2 microcuboids. The absorption edge of pure TiO2 samples is observed at about 380 nm, corresponding to the bandgap energy of 3.2 eV. After the N doping in the TiO2 samples, the absorption spectrum shows that the absorption edge is shifted significantly toward the visible region with a band edge of 535 nm (Eg = 2.3 eV) (Fig. 3b). The remarkable absorbance for visible light is attributed to the formation of the O−Ti−N linkage, leading to the narrowing of the energy band gap. This phenomenon can also be explained in terms of the formation of an intra-band gap located above the valence band, due to substitution of oxide centers by nitride centers and/or to the interstitial introduction of nitride into the oxide lattice.16 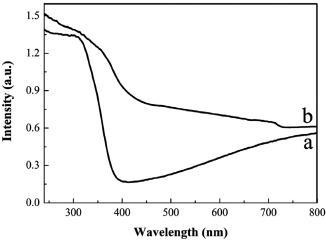 Figure 3.UV-vis spectra of TiO2 samples (a) and N-doped TiO2 microcuboids (b). 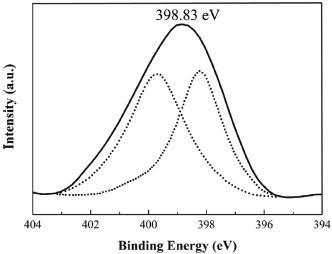 Fig. 4 shows the N1s X-ray photoelectron spectroscopy spectrum of the N-doped TiO2 microcuboids prepared by hydrothermal process. In general, the peak of N1s from the XPS spectrum is mostly found in the range of 396−404 eV. The N1s peak at 399.63 eV can be attributed to the nitrogen in the form of a Ti-N-O linkage, and the low bonding energy component located at 398.23 eV is generally known as the N atom replacing the oxygen atoms in the TiO2 crystal lattice to form an N-Ti-N bond. The relative atomic concentrations of N in the TiO2 sample is found to be 4.8 at.% based on the XPS data. 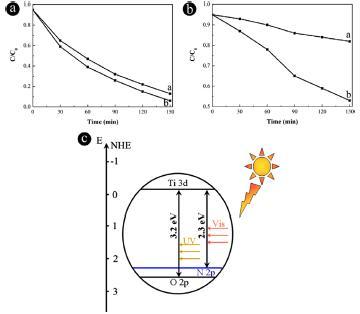