The Korea Journal of Herbology (대한본초학회지)

The Korea Association of Herbology (대한본초학회)

Objectives : Gastric cancer is a leading cause of cancer-related deaths, worldwide. Houttuynia cordata Thunberg (H. cordata) has been used as a medicinal plants and it has an anti-cancer activity in human colorectal cancer and leukemic cancer. However, the potential anti-cancer activity and mechanisms of H. cordata for human gastric cancer cells have not been tested so far. Thus, this study examined the biological effects of H. cordata on the human gastric cancer cell line SNU-1 and AGS. Methods : Inhibition of cell proliferation and cell cycle by H. cordata was carried out by MTT assay and Muse cell cycle analysis and the expressions of protein associated with apoptosis and cell cycle regulation were investigated with Western blot analysis. Results : In MTT assay, the proliferation of SNU-1 and AGS cells was significantly inhibited by H. cordata in a time and dose dependent manner, Inhibition of cell proliferation by H. cordata was in part associated with apoptotic cell death, as shown by changes in the expression ratio of Bax to Bcl-2 by H. cordata. Also, H. cordata regulated the expression of cell cycle regulatory proteins such as pRb, cyclin D1, cyclin E, CDK4, CDK2, p21 and p15. Conclusion : The antiproliferative effect of H. cordata on SNU-1 and AGS gastric cancer cells revealed in this study suggests that H. cordata has intriguing potential as a chemopreventive or chemotherapeutic agent.

Gastric cancer is one of the leading causes of cancer incidence and mortality around the world1). Although surgeryis the most effective therapy for gastric cancer, chemoprevention has been regarded as a promising strategy to reduce the incidence of gastric cancer. Thus, nowadays, many researchers have investigated the promising anti-cancer agents and found that natural compounds are important sources for cancer chemopreventive and chemotherapeutic agents.

H. cordata was kindly provided by Bonghwa Alpine Medicinal Plant Experiment Station, Korea. One kilogram of H. cordata was extracted with 2L of 80% methanol with shaking for 24 hours. After 24 hours, the extract with 80% methanol was filtered, concentrated to approximately 400 ml volume using by a vacuum evaporator, and subsequently fractioned with ethyl acetate in a separating funnel. The ethyl acetate fraction (42 g, yield rate: 4.2%) was separated from the mixture and evaporated by a vacuum evaporator. Ethyl acetate fraction was kept at -80 ℃.

Human gastric cancer cell lines (SUN-1 and AGS) and human normal gastric epithelial cells were purchased from American Type Culture Collection (Manassas, VA, USA) and grown in RPMI 1640 supplemented with 10% fetal bovine serum (FBS), 100 U/ml penicillin, and 100 μg/ml streptomycin. The cells were maintained at 37 ℃ under a humidified atmosphere of 5% CO2. Ethyl acetate fraction from H. cordata was dissolved in dimethyl sulfoxide (DMSO) and treated to cells. DMSO was used as a vehicle and the final DMSO concentration was not exceeded 0.1% (v/v).

SNU-1, AGS and human normal gastric epithelial cells (1x105 cells) were plated onto 96-well plate and grown overnight. The cells were treated with 0, 5, 25 50 μg/ml of extracts in media for 24 and 48 hours at 37 ℃ under 5% CO2. Then, the cells were incubated with 50 μl of 3-(4,5-dimethylthiazol-2-yl)-2,5-diphenyltetrazolium bromide (MTT) solution (1 mg/ml) for an additional 4 hours and then the formazan crystal produced was measured by an enzyme-linked immunosorbent assay reader at 570 nm. Cell growth inhibition was estimated as the reduction in values from a vehicle.

The cells were washed with 1 x phosphated-buffered saline (PBS), and lysed in NP-40 lysis buffer supplemented with protease and phosphatase inhibitor cocktail (Sigma Aldrich, St.Louis, MO, USA), and centrifuged at 15,000 x g at 4 ℃ for 20 min. After protein concentration was determined by Bradford protein assay. Equal amounts of proteins were subjected to SDS-PAGE and then transferred onto PVDF membrane. The membranes were blocked for non-specific binding with 5% non-fat dry milk in tris-buffered saline containing 0.05% Tween 20 (TBS-T) for 1 hour at room temperature and then probed with the primary antibodies overnight at 4 ℃, followed by incubation with horse radish peroxidase (HRP)-conjugated immunoglobulin G (IgG) for 1 hour at room temperature. Chemiluminescence was detected with ECL Western blotting substrate (GE Healthcare, Pittsburgh, PA, USA) and visualized in polaroid film.

Statistical analysis was performed with the Students unpaired t-test, with statistical significance set at *, P < 0.05. 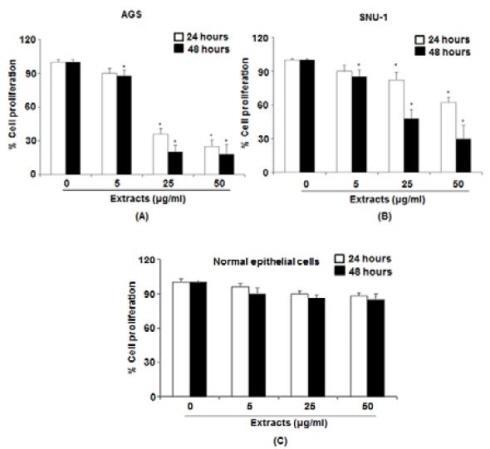 2. Effects of the extracts from H. cordata on the expression of Bax and Bcl-2

To determine whether the extracts from H. cordata induce apoptosis in SNU-1 and AGS cells, the expression levels of Bax and Bcl-2 were evaluated by Western blot. Overexpression of Bcl-2, one of the anti-apoptotic proteins and down-regulation of Bax, one of the pro-apoptotic proteins mediates resistance to apoptosis in cancer cells9). As shown in Fig. 3A and 3B, the extracts from H. cordata induced overexpression of Bax in both SNU-1 and AGS cells, while it did not affect the expression levels of Bcl-2. 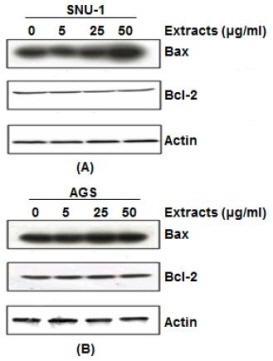 Fig. 3.Effect of H. cordata on the expression of Bcl-2 and Bax. SNU-1 (A) and AGS (B) cells were cultured in 6-well plate in presence of H. cordata for 48 h and equal amount of protein (40 μg) from cell lysates was subjected to SDS-PAGE as described in Materials and methods. Relative ratio was calculated using the software Un-SCAN-IT gel Version 5.1 (Silk Scientific, Inc.). The cells without H. cordata were treated with DMSO.

3. Inhibitory effect of the extracts from H. cordata on the expression of cell cycle-regulatory proteins

One of the major cell cycle regulators is retinoblastoma protein (pRb) which is considered to be a potent tumor suppressor. It inhibits the E2F family transcription factors for transition to S phase, resulting in control of the cell cycle at the G1-to-Sphasecheckpoint10,11).

Hypophosphorylated pRb inhibits cell cycle progression by associating with E2F, while sequential pRb phosphorylation results in G1/S transition12-14). Based on this literature, we tested the regulation of pRb phosphorylation by H. cordata to determine whether the cell growth inhibition by H. cordata is mediated from cell cycle arrest. As shown in Fig. 3A and 3B, H. cordata down-regulated pRb phosphorylation at Ser780 in both SNU-1 and AGS cells. There are growing evidence that pRB phosphorylation is induced by the complex between cyclin D and cyclin dependent kinase (CDK) 4/6, and cyclin E and CDK212-14). Thus we also investigated the expression levels of cyclin D1, cyclin E, CDK4 and CDK2 by Western blot. As results, expressions of cyclin D1, cyclin E, CDK4 and CDK2 were suppressed by the treatment of H. cordata at the dose-dependent manner in SNU-1 and AGS cells (Fig. 4A and 4B). Tumor suppressor proteins, p21 and p15 regulate cell cycle progression by inhibiting the activity of cyclin E/CDK2 and cyclin D1/CDK4 complex15,16). As shown in Fig. 4A and 4B, p21 and p15 were down-regulated in SNU-1 and AGS cells without H. cordata, but H. cordata dose-dependently up-regulated the expression of p21 and p15 in AGS and SNU-1 cells. 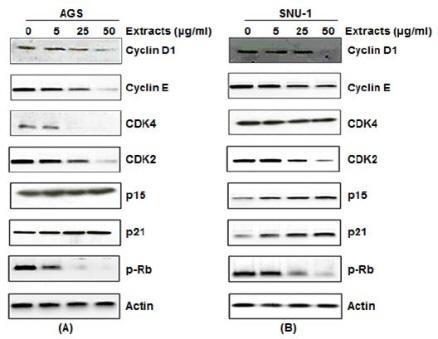 Fig. 4.Effect of H. cordata on the expression of cell cycle regulatory proteins. AGS (A) and SNU-1 (B) were treated with H. cordata for 48 h and equal amount of protein (40 μg) from cell lysates was subjected to SDS-PAGE as described in Materials and methods. The cells without H. cordata were treated with DMSO. Relative ratio was calculated using the software Un-SCAN-IT gel Version 5.1 (Silk Scientific, Inc.).

Although apoptosis is a process that removes damaged cells, resulting in the maintenance of cell numbers, cancer cells avoid apoptosis in response to various physiologic stimuli19). Therefore, the induction of apoptosis has been regarded as a major target for cancer chemoprevention. There is a growing advance that the process of apoptosis is associated with increase of Bax expression, a proapoptotic protein and degrease of Bcl-2 expression, anti-apoptotic protein20). Thus, the ratio of Bax to Bcl-2 is important in determining susceptibility to apoptosis21). Although H. cordata did not affect Bcl-2 expression, it up-regulated Bax expression. Taken together, H. cordata induced the increase of the ratio of Bax to Bcl-2. Therefore, apoptosis was induced in H. cordata -treated SNU-1 and AGS.

More and more investigations indicated that cell cycle arrest and apoptosis are closely associated with cell proliferation22). Also, the sensitivity to apoptosis often depends on the cell cycle23). Many studies have shown that inhibition of the cell cycle has been considered as a target for cancer chemoprevention24). Retinoblastoma protein (pRb) controls G1/S phase transition and is a major target of the cyclin-CDK complexes. The pathway controlled by pRb may be aberrant in most human cancers25). In normal cells, Rb is functionally inactivated by multiple phosphorylations mediated sequentially by a series of cyclin-CDK complexes25). Phosphorylation of Rb disrupts complexes with E2Fs, allowing for cell cycle progression into S phase25). G1-phase progression is mediated by the combined activity of the cyclinD1/Cdk4 and cyclin E/Cdk2 complexes23). CyclinD1-associated kinase activity increases in mid-G1, while cyclin E/Cdk2 activity increases in late G1 and peaks in early S phase23). We examined the effects of H. cordata on the expression of cell cycle-regulatory proteins in the G1 phase of the cell cycle. H. cordata suppressed the expression of cyclin D1, cyclin E, CDK4 and CDK2. In addition, H. cordata increased the expression of tumor suppressor proteins, p15 and p21. It has been reported that p15 inhibits CDK4 activity and p21 acts as broad specific inhibitors of cyclin D and E26). These findings indicate that the inhibition of SNU-1 and AGS proliferation by H. cordata may be mediated from the cell cycle distribution.

In summary, the results of the present investigation indicate the below.