Here, we introduce the define feeder loop line as the line with switching devices placed between feeders. The distribution networks can have loop configuration by switching on the loop lines.

The reverse power caused by the DG installed at the distribution network flows into the feeder as shown in Fig.1. The voltage at the node to which DGs are connected increases as the reverse power flow increases. 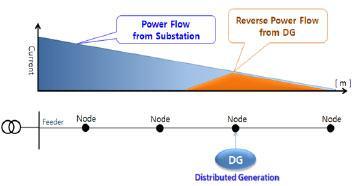 Fig. 1.The flow of the reverse power flow generated by the DG 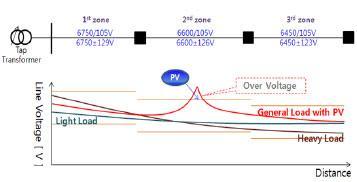 3.1 The advantage of the feeder loop line

Fig. 3 shows the power loss depending on the DG output power level with the feeder loop line switched on and off, respectively. 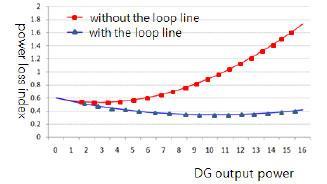 Fig. 3.The power loss index with the feeder loop line switched on and off 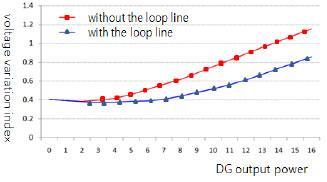 Fig. 4.The voltage variation index with the feeder loop line switched on and off

3.2 The place of the loop line at the distribution network

The loop lines are placed between two feeders with the same nominal voltages, i.e. the same region. The node at feeder 1 in region i is connected to the node at feeder 2 in region i through the feeder loop line. This strategy allows the region with the feeder loop line to have the same nominal voltage level. The loop lines are not placed to connect two nodes in different regions as shown in Fig. 5.

Fig. 5.Loop lines installed between the nodes with the same nominal voltages

For the simplicity of this study, two-feeder system was chosen as in Fig. 6.

We assume that one loop line has been prepared at each region for looping the feeders and the region voltage is represented by the node voltage.

4.1 The control objective for the loop line control

The voltage evaluation index [A] is defined by Eq. (1).

: the voltage of region i, measured at each feeder

The power loss at a line of impedance Z between two nodes is given by Eq. (4).

Then, the power loss at a network is approximately given by Eq. (4).

The feeder loop line control is to determine the status of sk so that node voltages and power losses are to be minimized.

The cost function for the control is given by Eq. (6).

The simulation study has been carried out by using PSCAD/EMTDC software.

Fig. 7.Voltage ranges of a feeder 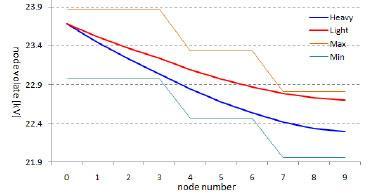 A generation source is placed in the middle of a feeder in any cases. The influence of various output level to voltage profiles was investigated. The output levels we considered are 0%, 7%, 14%, 20%, 30% of the total load.

The weighting factor α and β were given 0.5 respectively.

The simulation results were summarized in Table 2. ‘o’ represents that the loop line is on status, on the other hand ‘x’ represents the off status. 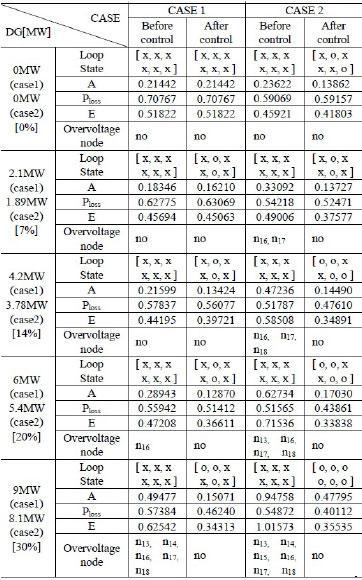 When the loop line control is not applied, the number of nodes with overvoltage in case 2 are larger than that of case 1. That is why reverse power under light load is greater than the heavy load case. The voltage profiles of case 2 are shown in Figs. 12 and Fig. 13. Overvoltage over the feeder caused by reverse power flow from distributed generator has been suppressed into the specified voltage range by the feeder loop line control. 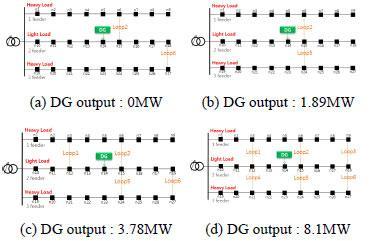 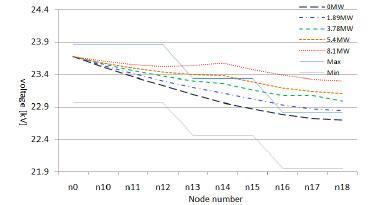 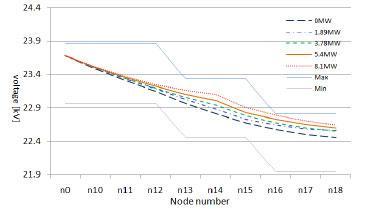 When distributed generators are included in the distribution networks, the feeder voltages tends to rise over the specified range proportionally to the output levels of the generators. The loop line control can be a solution to the overvoltage problem and reduce power losses of distribution networks. Further studies are needed to develop optimization methods to get the solutions considering taps of transformations.