In the water conservancy and flood controlling, town sewage treatment or water supply and drainage of industry and mining enterprises, large submersible electric pumps are widely used. In other fields it is also common, such as drilling machines used in bridge construction reconnaissance and thrusters used in submarines or deep-sea exploration ships. All of these subaqueous equipments are usually driven by submersible motors. Some large ones may cost millions of dollars and even more with corollary equipments. However, the reliability of horizontallyinstalled large submersible motors is still disputable due to the air-gap eccentricity or damageable bearings, etc. This problem not only occurs in large submersible motors, but also in many other kinds of motors. In [1], it has been pointed out that the most important mechanical faults are bearing faults (40%-50%) and eccentricity (60%).

Many papers address air-gap eccentricity, including static and dynamic eccentricity. And these papers can be classified in three categories: detection via current condition monitoring or some other methods, vibration generation, and unbalanced magnetic pull (UMP) [4]. Obviously, many studies cover more than one of these areas. Increased losses, as a by-product of rotor eccentricity, are discussed in a few papers. Smith et al [5] described the magnitude of the additional losses in a motor brought about by a progressive increase in the eccentricity of the rotor, and of thus obtaining information as to the amount of eccentricity which may be allowed in practice without serious disadvantages. Papers on the subject of condition monitoring put forward a variety of methods such as finite element method (FEM) [6, 7], artificial neural networks [8], multiple reference frames theory (MRF) [9] and so on. As for eccentricity linked with vibration, some relational papers like [10-12] try to put forward simplified calculation models and focus on the issues with resonant frequencies and the generation of vibrations around the critical speeds.

Although many papers mention eccentricity of electrical machines, few concentrate on the calculation of rotor eccentricity, critical speed and influence of thermal expansion. Dorrell [13] calculated the UMP in small copper (no skew) and aluminum (skewed) cage induction motors with dynamic eccentricity. Wang et al [14] calculated the stiffness and critical speed of magnetic bearing-rotor system based on finite element analysis (FEA), and Yu et al [15] calculated the rotor critical speed from permanent magnet synchronous machine. Furthermore, Belmans [16] analyzed the influence of rotorbar stiffness on the critical speed of an induction motor, which shows that the generally made approximations for the calculation of the mechanical parameters are no longer acceptable when considering aluminium rotors. Very few papers deal with influence of thermal expansion. Huang [17] pointed out that thermal expansion may lead to extra vibration.

2. Calculation of eccentricity and critical speed

1) The bearings are rigid bracings.2) The bearings are manufactured and assembled precisely, or the error is small enough, therefore the axis z in Fig. 1 is just right the geometric centerline of the stator core.3) The change of temperature does not have significant influence on the physical characteristics of motor materials, so the Young’s modulus, Poisson’s ratio, thermal expansion coefficient are set as constant.4) Just taking gravity, UMP and bending stress into consideration. The resultant force provides the centripetal force.5) The air-gap length is thought to be axially uniform. Hence average rotor eccentricity is used when calculating the UMP.6) Because of the relatively small deflection of shaft and thermal expansion of the rotor core, the simulation methods are based on linear structural analysis.7) Average temperature is introduced into the thermal expansion simulation.

Fig. 1.Rotation model of the shaft

According to the rotor dynamics, the rotation path of the geometric center of a horizontal shaft with rigid bracings is a circle whose center locates at the negative part of axis x, as Fig. 1 shows. The motion state of the shaft belongs to rotary motion which means a rotation state that the centripetal material of the bent shaft is always centripetal, and the internal stress is static stress rather than alternating stress. From the rotation path of O2 shown in Fig. 1, it can be seen that the maximum eccentricity along the axial direction f will reach the peak at the point Q. This peak value is of interest in this paper because it is the maximum eccentricity during the operation of a submersible motor. It is calculated using hybrid analytical/finite element method.

In order to investigate the influence of thermal expansion on eccentricity and critical speed in submersible induction motors, a hybrid analytical/finite element method is applied in this paper. Fig. 2 shows the flowchart of the method. The eccentricity and critical speed are calculated with both analytical method (AM) and finite element method (FEM). Detailed explanation of each procedure is given later in this section. 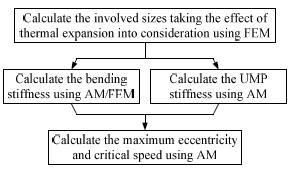 To see from a macroscopic perspective, the volumes of the majority of matters increase when heated up, including iron cores in electric machines. As submersible motors usually work under water, the cooling condition of the stator is much better than the rotor especially in dry submersible motors. Then the temperature of the rotor is usually much higher than the stator, and the thermal expansion of the stator is evidently less than that of the rotor. As a result, a decrement in air-gap length is produced. The air-gap flux density, bending stiffness and UMP stiffness are calculated considering the thermal expansion.

It has been mentioned that the maximum eccentricity of the shaft at the point Q is of interest. Fig. 3 shows the force condition of the rotor at point Q. The motion of the rotor can be described as uniform circular motion, and according to Newton’s second law of motion, the equation of motion can be expressed as 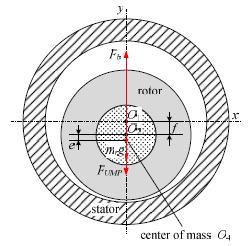 Fig. 3.Cross section of induction motor at point Q, including the force condition

Then the maximum rotor eccentricity is given by

Let the denominator of the right part of Eq. (3) equal to zero, and the critical speed can be calculated from

The bending stiffness of the shaft can be calculated using either AM or FEM. The differential equation of deflection curve and differential relationship between shearing force, bending moment and load intensity are presented by the following expressions:

where C1 and C2 are the integration constants which can be obtained by applying the boundary conditions. In fact, the intersection angle of shaft is generally so small that the magnitude of the term [df(z)/dz]2 is much smaller than 1, therefore Eq. (7) can be simplified as

Get (10) integrated twice and the expression of deflection is obtained:

where C3 and C4 are the integration constants which can be obtained by applying zero and ls to Eq. (11) where no deflection at this two positions. ls is the length of the shaft. Finally, the bending stiffness at the center of the shaft is approximately the form

Another important parameter is the UMP stiffness. The UMP which tries to pull the rotor further off the center can be calculated in traditional formula method. As known to all, the force caused by two electromagnets can be expressed as

where B is the flux density between two electromagnets, μ0 is the magnetic conductivity in vacuum and A is the area which the flux crosses. According to (13), the UMP produced by one pair of poles is expressed as

where Ap is the area of one pole, Bδ1 and Bδ2 are the air-gap flux density at position 1 and 2 shown in Fig. 4. The saturation and the puny change of air-gap coefficient which is caused by the change of air gap length are neglected here. The magnetic motive force of each pole is equivalent: 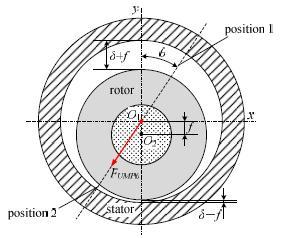 where Bδ is the air-gap flux density when the air gap is uniform, δ is the uniform air-gap length, e0 is the initial eccentricity, and θ is the angular position. Combine (14) and (15), the UMP leads to the expression

where p is the pole pairs. The area of one pole is denoted by Ap where 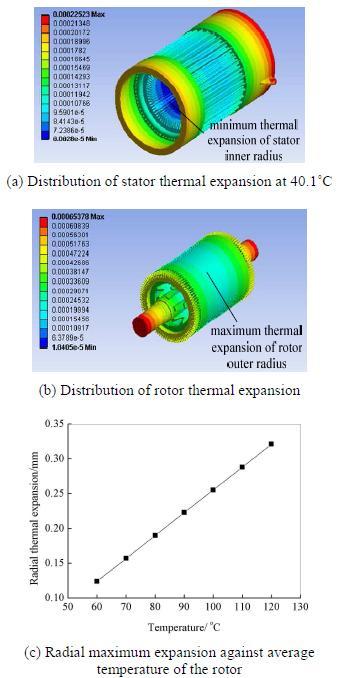 Fig. 7 shows the simulation results of bending stiffness. It is obtained by applying different loads to the shaft between z1 and z2, as Fig. 7 (a) shows. With small distortion, the eccentricity is thought to be linear and bending stiffness constant. The bending stiffness is approximately 1.24×109 N/m. 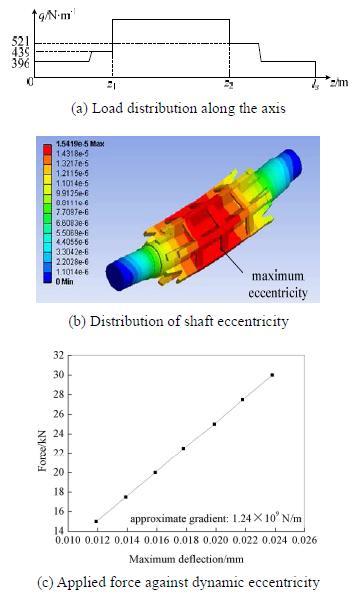 The air-gap flux density Bδ mentioned in Eq. (15) may increase with the decrement of air-gap length, but the magnetizing current decreases due to the higher temperature, and finally the air-gap flux density can be regarded as constant. It can be seen from (18) that the UMP stiffness increases with the expansion of the rotor. Fig. 8 shows the UMP stiffness variation with rotor temperature. 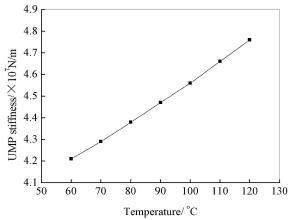 When the bending stiffness and UMP stiffness are computed, the maximum eccentricity and critical speed are obtained by applying K and K0 to (3) and (4). The mass eccentricity of rotor can be reflected by mreω2 in (3), and it is generally reduced to less than 100 g·cm. Because of the UMP stiffness increases with the thermal expansion of the rotor, it is obvious that a larger dynamic eccentricity and a lower critical speed are obtained. Finally, the maximum decrement of air-gap length can be expressed as

where δE is the maximum thermal expansion shown in Fig. 6(c). Considering Eq. (3), the above maximum decrement of air-gap length can be replaced by 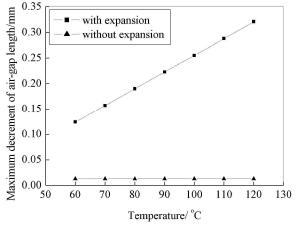 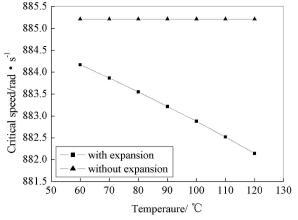 where K0΄ is the UMP stiffness without considering thermal expansion.

Practice shows that in order to ensure the safe and reliable operation of an electric motor, the smaller the air gap decrement of an induction motor is, the better, and the critical speed should be at least 30% faster than the rated speed. If the thermal expansion is not considered, the decrement of air gap is 0.7% and the critical speed is 844.3% faster than the rated speed. However, it can be seen from the simulation results that the air gap decrement increases from 4.3% (60℃) to 15.2% (120℃) and the critical speed decreases from 850.3% (60℃) to 848.3% (120℃) faster than the rated speed when considering the influence of temperature (thermal expansion). Therefore, the influence of thermal expansion should be considered when designing the shaft.