In this paper, a method for multi-physics analysis of the temperature-dependent properties of an oil-immersed transformer is discussed. To couple thermal fields with electromagnetic and fluid fields, an algorithm employing a user defined function (UDF) is proposed. Using electromagnetic analysis, electric power loss dependent on temperature rise is calculated; these are used as input data for multi-physics analysis in order to predict the temperature rise. A heat transfer coefficient is applied only at the outermost boundary between transformer and the atmosphere in order to reduce the analysis region. To verify the validity of the proposed method, the predicted temperature rises in high-voltage (HV) and low-voltage (LV) windings and radiators were compared with the experimental values.

Magnetic circuits and windings are principal sources of loss, and thus of temperature rise, in a transformer. Core and copper losses are mainly responsible for heat generation, and such heat must be dissipated in order to keep the core and winding parts from reaching a temperature that will cause deterioration of the insulation [1, 2]. As maximum allowable temperatures depend on factors such as the ambient temperature, transformer design, loading condition, and amount of cooling provided, the accurate estimation of the transformer temperature is critical design factor, and limits for temperature rise are specified in International Standard [3].

Previous work concerning the thermal dynamics of power transformers has been conducted by Marina A. Tsili and Eleftherios I. Amoiralis [4], who derived a hybrid numerical-analytical technique for power transformer thermal modeling, and by Carlos Ortiz and Adam W. Skorek [5], who performed a parallel computational fluid dynamics (CFD) analysis of conjugate heat transfer in a dry-type transformer. Although these studies produced some interesting results, they mainly investigated the thermal problem itself, as opposed to the interactions of the physical processes of the thermal, electromagnetic, or fluid fields; as such, accurate temperature rise prediction was not attempted.

Now, in this paper, a multi-physics analysis that can produce an accurate temperature rise prediction in an oil-immersed transformer is presented to obtain the more accurate results than our previous works [6, 7]. To couple thermal, electromagnetic, and fluid fields, an algorithm employing an UDF [8] is proposed.

In order to accurately predict the temperature rise, accurate modeling of heat sources is needed. Electric power losses can be calculated by means of electromagnetic analysis; in order to do so accurately, the copper loss can be considered to be temperature-dependent, whereas the core loss can be accurately estimated using Bertotti’s model [9, 10] as derived from Steinmetz’s equation. Electric power losses calculated in this way can then be used as input data for multi-physics analysis; in order to predict the temperature rise accurately, the material properties of cooling oil can be considered to be temperature-dependent. Also, we apply heat transfer coefficient obtained by calculating the Nusselt number [11] at only the outermost boundary between the transformer and the atmosphere this restriction is applied in order to reduce the computing time. To verify the validity of this proposed analysis method, its results in terms of temperature rise in the high-voltage (HV) and low-voltage (LV) windings and radiator can be compared with the experimental results.

The transformer studied was an oil-immersed, single-phase unit (1MVA, 6600/690V, 60Hz). The multi-physics analysis model used to assess power 1oss in this transformer has an electromagnetic and a thermal-fluid component; to reduce the computing time, the electromagnetic component, shown in Fig. 1(a), consists of a reduce model of the transformer core and approximate windings, whereas the thermal-fluid component, shown in Fig. 1(b), consists of a model of the transformer parts. To reduce the analysis region, we applied a quarter symmetry model to determine boundary conditions such as the symmetry boundary and the heat transfer coefficient.

In order to obtain an accurate analysis of characteristics of the transformer system, an assessment of the relationships between multi-physical phenomena (multi-physics) is required. For the study described in this paper, we employed a user defined function (UDF) algorithm to solve the multi-physical problem of coupled thermal, electromagnetic and fluid fields. Some of the material properties relevant to both the electromagnetic and the fluid fields are dependent on temperature and thus on the thermal effects; Fig. 2 shows the multi-physics algorithm used to assess the material properties that are dependent on the temperature characteristics. 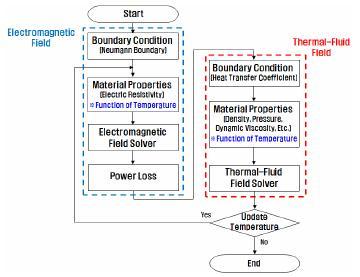 As can be seen in the Fig. 2, the process involves calculating electric power losses using electromagnetic analysis and then predicting temperature rise using thermal-fluid analysis, with this sequence of analysis iteratively processed until the temperature reaches a steady state.

Two main types of losses can occur in an electric power transformer: copper loss and core loss [1]. The amount of copper loss incurred can be calculated as a function of the main current running through the primary and secondary windings.

where Pw is the power loss in the coil winding [W], σe is the electric conductivity [S/m], is the current density [A/m2], and dv is the incremental volume element [m3]. The electrical properties of copper are dependent on temperature, with the resistivity changing as temperature increases and the power loss correspondingly increasing: 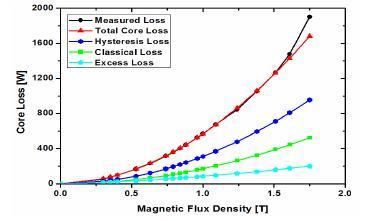 Fig. 3.Core losses due to the magnetic flux density @60Hz

The total core loss shown in Fig. 3 is the sum of the hysteresis loss, the classical eddy current loss, and the excess eddy current loss, and there is a good agreement between the measured loss and the calculated total core loss values over the operating range of a power transformer. The magnetic flux density and core loss distributions in the transformer core can be numerically calculated by using an FEM for a transformer’s magnetic field, as shown in Fig. 4.

Here, it can be seen that the average magnitude of loss at the transformer core is 1,357.1 [W]; this represents an error of approximately 7.9 [%] compared to the design value. The electric power losses generated by combining the initial copper and core losses in this method can then be used as input data for a multi-physics analysis.

A heat transfer mechanism requires the existence of a temperature difference; additionally, in all modes of heat transfer, movement of heat proceeds from a higher to a lower temperature medium. Heat transfer in a transformer is effected through conduction, convection, and radiation, given respectively as below [4, 8]:

where, is the heat flow [W], k is the thermal conductivity [W/m·℃] of the medium, A is the cross section [m2], ε is the surface emissivity, and σ is the Boltzmann constant [W/m2·K4].

Heat transfer in an oil immersed transformer mainly occurs by circulation of cooling oil. Heat generated by electric power losses is transmitted to tank and radiator. According to law of energy conservation, the energy balance equations in insulation oil are given as below [2].

where, Nu is the Nusselt numbers, h is the heat transfer coefficient [W/m2·℃] and δ is the characteristic length [m].

Typically, the heat transfer in a power transformer is primarily influenced by the circulation of the cooling oil, the fluid dynamics of which can be modeled using CFD. Fluid flow and temperature distribution within a transformer are governed by three conservation equations. These can be solved simultaneously with a semi-implicit method for pressure-linked equations (SIMPLE) algorithm, which uses a combination of continuity and momentum equations in order to derive an equation for pressure correction [5, 13, 14]:

where, ρ is the density [kg/m3], is the velocity [m/s], is the acceleration of gravity [m/s2], μ is the viscosity [kg/m·s], p is the pressure [N/m2], cp is the specific heat of the fluid at constant pressure [J/kg·℃], Φ is a dissipation function, and q′ is the energy per unit volume [W/m3]. Turbulence phenomena in the cooling oil can be modeled using a k − ε turbulence model having two transport equations one dealing with the kinetic energy of turbulence and the other involving the dissipation rate.

Many properties of the cooling oil are affected by temperature as below [13]. 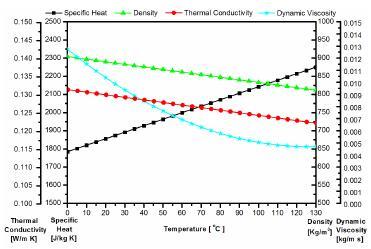 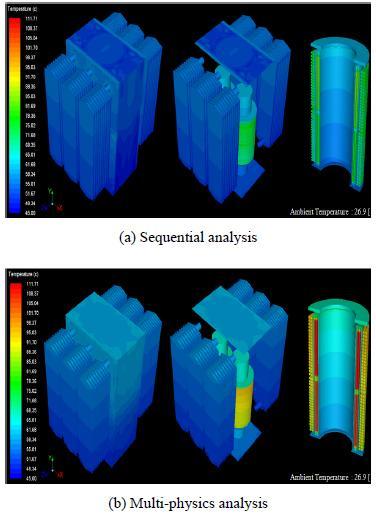 As can be seen in Fig. 7, the amount of temperature rise predicted by the multi-physics analysis model showed greater agreement with the experiment than that predicted by the sequential model.

In this paper, a multi-physics analysis used to predict the temperature rise in an oil-immersed transformer was described. In this method, an algorithm using a UDF is performed in order to couple thermal, electromagnetic field, and fluid fields. To accurately predict the temperature rise, accurate modeling of heat sources is required. In order to calculate heat source parameters accurately, copper loss is considered to be temperature dependent, and core loss is calculated using Bertotti’s model. The numerically calculated magnetic flux density values and the analytically calculated core loss coefficients could be used to solve this model. The results from this method agreed well with the design values.

To reduce the region of analysis, we used a quarter symmetry model determined by the boundary conditions such as the symmetry boundary and the heat transfer coefficients. The electric power losses and boundary conditions thus calculated were then used as input data for multi-physics analysis; in order to predict the temperature rise accurately, the material properties of cooling oil considered to be temperature-dependent. In order to verify the validity of the analysis, the predicted temperature rises in the HV and LV windings and radiator were compared with the experimental values. From this, it could be seen that the temperature rise predicted by the multi-physics analysis is closely in accord with the experimentally obtained values; this gives us confidence that the method proposed in this paper will be useful in improving the thermal design of power transformers.