To study and locate partial discharge(PD) and analyze the transient state of power transformer, there is a need for a high frequency model of transformer winding and calculation of its parameters. Due to the high frequency nature of partial discharge phenomenon, there is a need for an accurate model for this frequency range. To attain this goal, a Multi-Conductor Transmission Line (MTL) model is used in this paper for modeling this transformer winding. In order that the MTL model can properly simulate the transformer behavior within a frequency range it is required that its parameters be accurately calculated. In this paper, all the basic parameters of this model are calculated by the use of Finite Element Method (FEM) for a 20kV winding of a distribution transformer. The comparison of the results obtained from this model with the obtained shape of the waves by the application of PD pulse to the winding in laboratory environment shows the validity and accuracy of this model.

In the detailed model, called internal model or ladder RLC, the smallest space in a winding of a turn or a group of turns such as a disc or a pair of discs is modeled by an RLC circuit and the collection of the winding is in the form of a ladder network. Each element in the network has a capacitor relative to the ground and the inductances have also mutual induction. It is difficult in this method to estimate the circuit parameters with regard to the data related to the geometrical dimensions of transformer and the materials employed [4].

Contrary to the above method, the distributed parameters of transmission line are used for winding model in the MTL modeling method. Due to the presence of inductances and capacitors in transient states, traveling waves are created which are propagated at different speeds inside the winding and based on the total effects of these transient waves, a state of resonance is created. Based on the theory of multi-conductor lines, the winding modeling is in the form of transmission lines which are parallel in positioning, but are in series electrically [5, 6]. In this modeling, each winding unit is considered as one transmission line with distributed parameters and their collection forms a multi-conductor transmission system. This method is also applicable for electric machines, transformers, and cables [7].

In this paper, the model of MTL is used for the simulation of transformer winding in the study of high frequency phenomenon effects. A new solution approach to obtain the MTL model parameters by the use of finite element method (FEM) is also presented.

This paper is organized as follows: MTL model is introduced in the second part and the manner of obtaining the electrical parameters is explained. In the third part, a new method is explained for the manner of obtaining the electrical parameters of the model through finite element method (FEM). Then, a comparison is made in the fourth part between the model simulation results and the laboratory results to assess and validate the model, and at the end the final conclusion is presented. 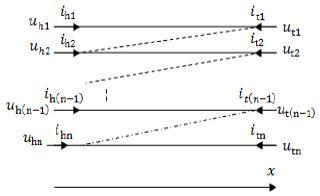 In Fig. 1 when each turn of the winding is expressed by one transmission line, the propagation phenomenon in the transformer winding can be expressed through telegraphic equations in time domain:

Where u(x,t) and i(x,t) are the voltage and current vectors at position x along the line; R,L,G and C are the per unit length resistance, inductance, conductance and capacitance matrix, respectively.

Due to the symmetry of electrical parameters, the telegraphic equations in frequency domain are as follows:

By the use of this model based on the theory of traveling waves, the calculation of the voltage and transient current is possible through all the points along the winding.

Voltage vectors and current at x distance from the beginning of the line can be obtained by Eqs. (3) and (4) as follows:

Where, i and r are the voltage vectors with regard to the boundary conditions, [Y0] = [Y][P]–1 of model specification admittance matrixand [P] Product of matrixes Z and Y.

By the use of boundary conditions which are as follows:

Where IPD is the PD pulse current. By the application of the boundary conditions, the currents of the sending end and receiving end can be expressed in terms of voltage vectors:

By inversing matrix [Y], the transfer function matrix [T] of transformer will be as follows:

The transformer bushing can be included in the equations by CB capacitor connected to the beginning of the line.

After solving the stated equations, it is possible to calculate the current equation produced due to the occurrence of PD at the head and at the end of the winding. By considering the above conditions, the transfer functions for the location of PD occurrence toward the winding phase (TFL) and up to the neutral end of the winding (TFN) is as follows [9]:

2.1 Calculation of the model parameters

Where, ε0 is vacuum dielectric constant and εp is the relative dielectric coefficient of the paper and αp is the thickness of the paper at the two sides of the conductor while, da is the average diameter of the winding and h is its height of conductor.

Where, Ln is the mutual matrix; Co is the capacity matrix in vacuum medium; is the propagation speed of electromagnetic waves in vacuum; ε0 is vacuum dielectric constant; μ0 is permeability of the vacuum and E is the unit matrix.

With regard to the skin effect, the self-inductance at high frequencies is calculated as follows:

Where, in Eq. (16) Rs is the resistance due to the skin effect, and f is the frequency. The whole inductance is calculated by Eq. (17):

The resistance equation of the conductor length unit considering the skin effect can be represented as follows:

Where, d1 and d2 are the width dimensions of a rectangular conductor; μ is the conductor magnetic permeability coefficient; σ is the electric conductivity capability; and f is the frequency.

The Finite Elements Method (FEM) is a numerical method used for approximate solution of partial differential equations and also for the solution of integrals. The finite elements method as an accurate and valid method has great applications in simulating the behavior of transformers in different conditions. Of these applications, it can be referred to the calculation of leaking fluxes and electromagnetic forces. By the use of FEM method, the circuit parameters equal to winding are calculable by considering the details of the transformer structure. In this paper, ANSOFT MAXWELL software, which solves problems on the basis of the analysis of the elements, is employed to obtain the winding parameters.

Based on electromagnetic laws, the total stored electric energy W in a space with a volume of V can be obtained by the following Eq. [11].

Where, Ui and Uj are the voltage relative to conducting ground i and j; Cii the self-capacitor, and Cij is the mutual capacitor capacity, respectively. The energy method is a method by which the capacity capacitor is calculated. To calculate the coefficients in this method, Cii is applied to the desired constant voltage ith conductor and the remaining voltage of conductors is equal to zero and the energy is calculated in each of the three states. Then, the capacitor capacities are simultaneously obtained. In this state, as it is shown in Fig. 3 the total energy W is calculated as it was mentioned above. The diametric elements of the matrix C can be obtained by the following equation: 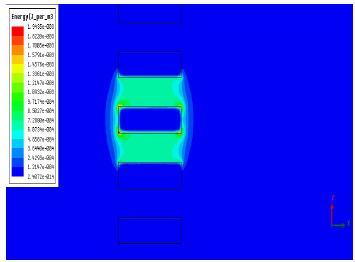 Fig. 3.Energy around the 32th turn during calculation of capacitor capacity

Where, Di is the density of the generated electric flux in conductor i when a 1-volt voltage is applied to the conductor; and Ej is the intensity of the generated electric field in conductor j when conductor j voltage is 1. To calculate the Cij coefficients, constant voltages are applied to conductors i and j and the remaining conductors are kept at zero voltage. Like the calculation of Cii, by calculating the stored electric energy in space, the non-diametric elements of C matrix are obtained. The major non-diameter elements of C matrix can be obtained as follows:

The stored energy in the magnetic field which couples two conductors is obtained as follows: 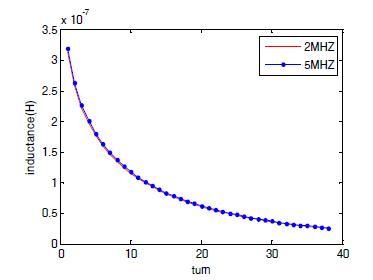 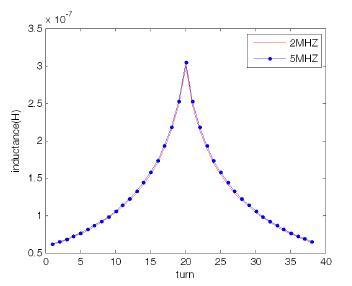 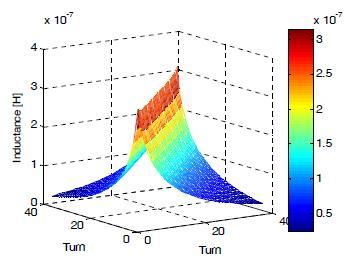 Where, is the electric conductive of the conductor and J is the current density. Then, by using the following equation we can obtain the resistance [12]:

Simulator considers the peak of flowing current in each conductor equal to one ampere, so the resistance is equal to 2P. To calculate inductance and resistance in MHz range, the skin effect should be considered in calculations.

Fig. 9 shows the manner of resistance size change in terms of turns for the 20th turn. 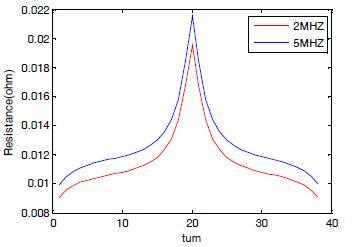 The specifications of the tested transformer winding depicted in Fig. 2 is presented in Table 1. 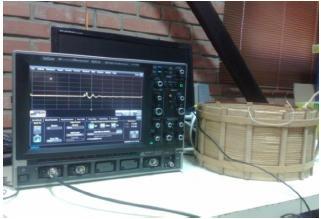 Magnetic results obtained from 20 kV transformer winding modeling are shown in Figs 3 to 5. 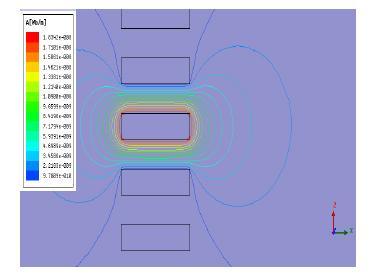 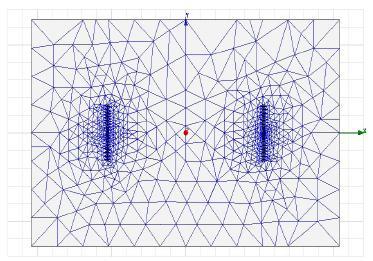 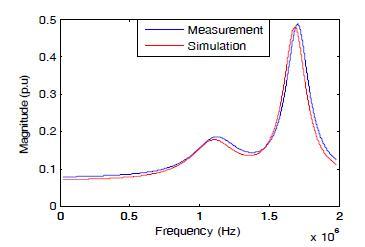 Fig. 10.The measured and calculated magnitude of transfer function of turn 20 compared to the beginning of the winding

Some of the calculated parameters for the winding in the experiment using analytical relations and finite elements method (FEM) have been presented in Table 2.

Table 2.The calculation and FEM results

4. Study of the Model Validity 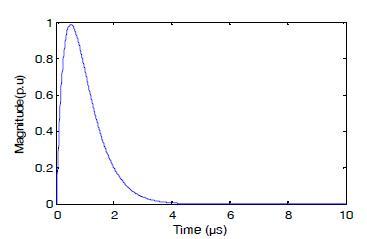 Also, in laboratory the PD pulse with the specifications of Fig. 11 is applied to 6 and 24 turns and is measured from the head of the winding. The partial discharge measurement circuit is as shown in Fig. 13. 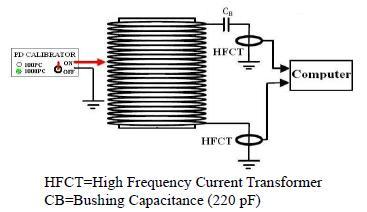 Fig. 13.Employing PD pulse to various points in the coil and measuring them at the two ends of the coil

These measured signals are in time domain according to Fig.14, and are transferred to frequency domain to be compared with the simulation results. 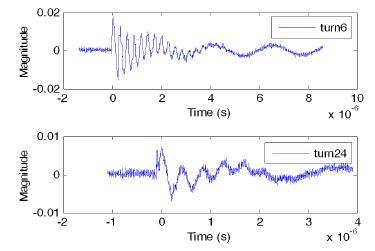 Fig. 14.The measured signals at the first of the 20 kV winding resulting from the application of the PD pulse to turns 6 and 24 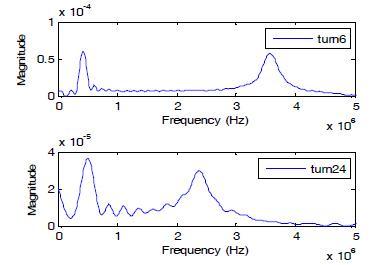 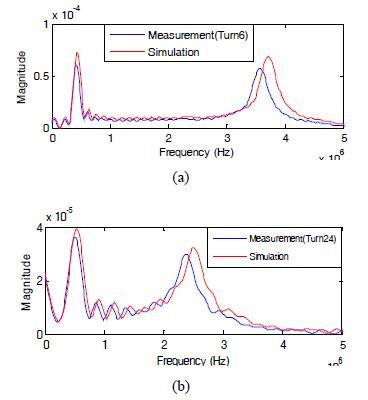 Fig. 16.Results of simulation and measurement of the shape of the waves of the first of the winding resulting from the application of the PD pulse. A: turn 6; B: turn 24.

To perform more studies on the results, the correlation coefficient was applied by the use of formula (25) for all the turns resulting from simulation and measurement depicted in Table 3.

The results of Table 3 show that the diametric coefficients (the correlation coefficients in the simulated turns with the measured turns of the same location) show the most dependence on each other. This shows that the simulation results enjoy good accuracy.

In general, these results show that the proposed model can properly study the partial discharge pulse propagation along the length of the winding.

The transformer winding was simulated by the use of multi-conductor transmission line in this paper. The efficiency of the multi-conductor transmission line model is greatly dependent on the MTL model parameters in the studies of transformer internal phenomena. With regard to inevitable approximations present in the calculation of the MTL model formula and also transformer generated tolerances along with the model intrinsic limitations, it is not practically possible to calculate the MTL model parameters with high accuracy in most cases. It was shown in this paper that it was possible to estimate the MTL parameters with high accuracy by the use of finite elements model (FEM) through An soft Maxwell software. The comparison of the results obtained through a test on a 20 kV winding and the results obtained from simulation of this winding is indicative of the accuracy and validity of this model.