This paper presents a motor characteristics analysis method using an equivalent circuit. Motor characteristics analysis via equivalent circuit is very important for designing a high efficiency single phase induction motor. The accuracy of the motor characteristics depends on the accuracy of the parameters, especially saturation factor, which determines the cyclical relationship in the analysis process. Therefore, using the proposed method, the saturation factor was calculated using the iteration routine and numerical technique. The proposed method was verified by comparing the finite element method results and the dynamo test results of manufactured prototype model.

An electric motor uses above 50% electrical energy. Among the existing electric motors, the induction motor is most widely used. Therefore, a high efficiency induction motor has to be developed to overcome the current energy shortage and to meet the requirements of policies like the Minimum Energy Performance Standard [1]. For designing a high efficiency single phase induction motor, it is important to analyze the characteristics of the motor using an equivalent circuit, to exclude heuristic knowledge like the output coefficient. The accuracy of the characteristics as analyzed using an equivalent circuit depends on the accuracy of the equivalent circuit’s parameters. In particular, the magnetization reactance, which is calculated based on the saturation factor, is very important. If the saturation factor is assumed to have a conventional heuristic value, many errors occur in the characteristics analysis results, and the designed motor efficiency will be reduced.

In this paper, a motor characteristics analysis method using an equivalent circuit is presented. The key strength of this method is that it can be calculated the saturation factor more accurately.

In the case of the single phase induction motor, the main winding and the auxiliary winding are not the same. Thus, it has the structure of an unbalanced two phase motor. To determine the characteristics of the motor under unbalanced conditions, a symmetrical two phase equivalent circuit was constructed [2, 3, 4]. Fig. 1 shows the equivalent circuit as having parameters compensated to the main winding part [5]. 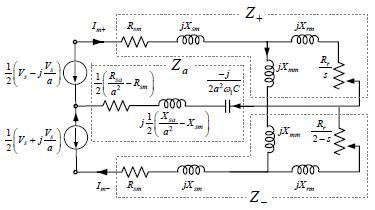 Fig. 1.Equivalent circuit for the single-phase induction motor with run-capacitor

The saturation factor is defined as the following:

I0 : maximum current value at no load 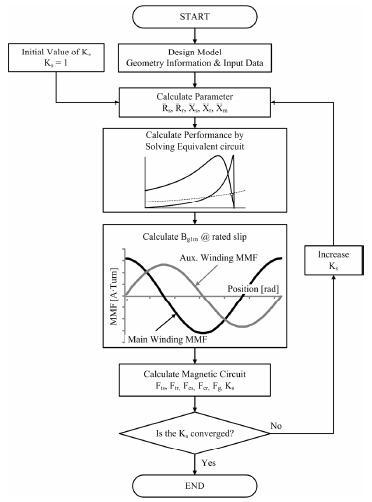 Fig. 2.Flow chart of the iteration routine for considering the saturation factor 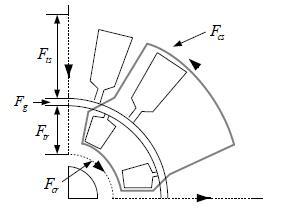 Using the magnetic circuit method, the total magnetomotive force can be calculated as the following:

The magnetomotive force equation in the airgap can also be calculated as the following:

The magnetomotive force in the airgap can be calculated based on the magnitude of the airgap magnetic flux density, which the iteration routine converged with the initial saturation factor value.

As the magnetic field strength depends on the magnetic characteristics of the iron material and the magnetic flux density, the magnetomotive force calculation in the yoke and teeth of the core requires the H-B curve characteristics of the iron material. In this paper, H-B curve of iron was fitted using a numerical technique, such as the Gaussian 4th fitting function. Using trust region reflective Newton algorithm [6], the Gaussian 4th fitting function was fitted as the following:

The magnetic flux densities in yoke and teeth of the core can be expressed as the following:

Using Eq. (7), the magnetic field strength in each part can be calculated from the precalculated magnetic flux densities in the airgap, yoke, and teeth.

The magnetomotive forces in the yoke and teeth of the core can be calculated as the following:

Table 1 shows the design specifications, constraints, and heuristic knowledge of the single phase induction motor. The analysis results using the proposed method were compared with FEM results of the designed model. Fig. 5 shows the FEM model and the external circuit with run capacitor [9-11]. Due to the designed motor type was capacitor start and run, the FEM model was connected with the external circuit, including run capacitor. Using the proposed method and FEM analysis, the airgap magnetic flux density was calculated. Fig. 6 shows the airgap magnetic flux density. The error between the magnetic flux density results was less than 10%. Table 2 compares the results. Except for the rotor loss, the results were very close. 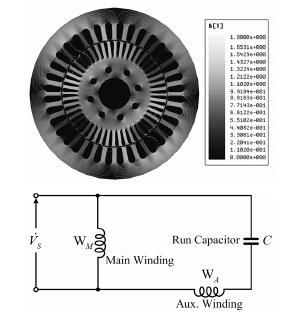 Fig. 5.The finite element model and the external circuit with run-capacitor 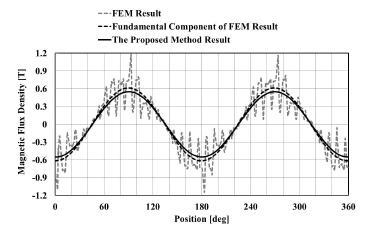 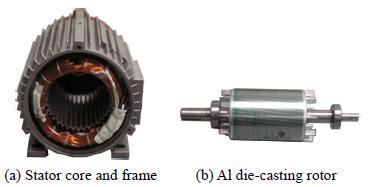 As no standards have been established for the loss separation test method for the single phase induction motor, the input power, output power, and efficiency were measured using a dynamo test set and a power analyzer, under the state of saturated temperature.

Table 3 shows the comparison. There seems to be a little difference between the measurements and the analysis results using the proposed method. It is for this reason that the motor test condition was set to meet the equal output power for efficiency comparison. The efficiency of the prototype motor was determined to be 6% lower than the value obtained through the proposed method. It is thought that self-cooling fan loss, centrifugal force switch that is a device adjoined to the motor’s rotor, automatically changes from start capacitor to run capacitor and the manufacturing error were reasons of the efficiency error. It caused a slip difference at operating condition had the same motor output. The slip difference reduced the measured efficiency of the manufactured model.

Table 3.Comparison of results using the proposed method and dynamo test results of the manufactured motor

In this paper, characteristics analysis method by equivalent circuit considering the saturation factor was proposed. In order to calculate a more accurate saturation factor, iteration routine and numerical techniques were applied. By comparing with FEM results of designed model and dynamo test results of prototype model, it can be stated that the proposed method can guarantee more accurate analysis results and design output. And the proposed characteristics analysis method can be applied to basic design process in motors like permanent magnet motor.