For the application involving pulsating inertia loads and frequent starting, the induction machine with high starting torque and high full load efficiency is essential. The torque-speed characteristics of the driving motor are important. The motor must have sufficient locked-rotor torque for initial starting. Typically, for these applications, an induction machine with NEMA design D torque-speed characteristics and high efficiency is in great demand [1].

NEMA design D induction machines, in generally speaking, are characterized by high starting torque, low starting current, and high operating slip. Full load slip for this kind of machines is quite high because of the high rotor resistance.

Depending on the application, an induction machine designer is obliged to choose between high starting torque and high full load efficiency, by selecting the appropriate rotor bar resistance. In the foregoing researches, the rotor slot has been often optimized for general-purpose application to increase the starting torque [3-4] or efficiency at specific speed [5] based on equivalent circuit and finite element method.

However, a systematic optimal method to design the shape of rotor slot for specific torque-speed characteristics such as NEMA design D motor with high efficiency is quite difficult to find.

In this paper, a systematic design method which determines the shape of rotor slot for a NEMA design D torque-speed characteristics with high full load efficiency is developed utilizing the multi-objective particle swarm optimization algorithm combined with an adaptive response surface method and Latin hypercube sampling strategy. The torque-speed characteristics and efficiency is evaluated by using the equivalent circuit method combined with the FEM.

2. Calculation of Torque-speed Characteristics and Efficiency of Three-phase Induction Machine

In this paper, the torque-speed characteristics and efficiency characteristics of a three-phase induction machine are analyzed by combining the equivalent circuit method (ECM) with the transient finite element method (FEM) [6-9].

In order to achieve the design D torque-speed characteristics, it is necessary to evaluate not only the starting torque but also the maximum torque slip.

From the equivalent circuit of induction machine, the mechanical torque can be derived from power loss on R2 (1-s)/s at the specific slips shown as follows:

where ωs is synchronous speed, V1eq and Z1eq are defined as follows:

where is phasor representation of phase voltage.

To arrange the Eq. (1), the expression of mechanical torque at slip s is expressed by using symbol A, B, and C shown as follows:

where the coefficients A, B, and C are defined as follows:

In general, the iron loss resistance and magnetizing reactance are much larger than other equivalent circuit parameters. Therefore, by assuming a large Rc and Xm, the above equations can be simplified as follows:

From the simplified equations, the following equivalent circuit parameters are obtained:

By solving the parameters A, B, and C from FEM results, the above equivalent circuit parameters are determined.

The mechanical torque expression also can be expressed in reciprocal way shown as follows:

If there are three different torques and speed values, the mechanical torque expression can be written by matrix form shown as follows:

By solving Eq. (8), the coefficients A, B, and C can be expressed by three slips and torques values, respectively. The determinant of the coefficient matrix in (8) is nonzero and finite if and only if the three different torque values at asynchronous speeds. With given three different torque values, the torque-speed characteristics can be obtained from (7). The three torque-speed values can be calculated from the transient finite element method with constant speed. By using these three values, the entire torque-speed characteristics can be determined accurately. For example, the locked-rotor torque, full load torque, and an arbitrary asynchronous torque point are selected to evaluate. This method can prevent inaccuracy while only the equivalent circuit method is used.

Furthermore, the maximum torque slip, smax, can be derived from (7) and be expressed as follows:

Even for the parameters of stator side such as stator leakage inductance and magnetizing inductance are related with geometry of rotor slot opening which is considered by using Carter coefficient.

The NEMA design D torque-speed characteristics can be achieved by limiting the maximum torque slip close to one, and maximizing the starting torque simultaneously.

where E1 is rms value of phase winding back EMF, and Pc is total iron loss. Other equivalent circuit parameters can be derived with different rotor slot geometries by using the analytical method. The efficiency (η) is defined as the ratio of output mechanical power (Po) and input electric power (Pi) calculated as follows:

where V1 and I1 are phase voltage and current; I2 and R2 are current and scaled resistance of rotor conducting bar, respectively.

In order to make a balance between calculation accuracy and computing cost, a hybrid method which combines the FEM and ECM is introduced to evaluate the starting torque, the maximum torque slip, and efficiency.

In section 2.1 and 2.2, the equivalent circuit equation of the induction machine is derived and then the maximum torque slip and efficiency can be calculated.

By using the adaptive response surface method, only the performance of the design on the sampling points needs to be determined by proposed method. For each specific design the evaluation flow is summarized as follows.

Step 1: The specific design is analyzed with transient FEM at the locked rotor state. After the steady state is reached for the analysis, the steady state torque can be calculated utilizing the average of time-torque curve for several periods. The starting torque is determined.Step 2: For the previous specific design, the same transient FEM is applied with the rated speed and an arbitrary speed. After the calculation, the two torque-speed points can be determined;Step 3: From Steps 1 and 2, totally three torque-speed points are determined by FEM. By using the method introduced in section 2.1 the parameters A, B, and C can be determined from (8). The maximum torque slip is determined from (9).Step 4: According to the calculation results from step 3, the iron loss under the rated condition can be determined by using the method which is introduced in section 2.2.Step 5: Based on the result from step 4, the iron loss resistance Rc can be determined from (10).Step 6: The stator winding resistance R1, stator leakage reactance X1 and magnetizing reactance Xm are determined from analytical method which is introduced in [6].Step 7: For the calculation of rotor resistance R2 and leakage reactance X2, the parameter estimation method which is introduced in section 2.1 is applied. Up to now, the all equivalent circuit parameters are determined.Step 8: The efficiency can be calculated by using (11) and (12) from the ECM.Step 9: The starting torque, maximum torque slip, and efficiency are determined for each sampling design by repeating the step 1 to step 8.

The design D torque-speed characteristics can be obtained by controlling the maximum torque slip close to one and maximizing starting torque simultaneously. In addition, the maximum full load efficiency should be achieved at the same time. To satisfy this requirement, a three-objective optimization problem with design variable vector x can be formulated as follows:

Model (13) appears straightforward and profitable to satisfy the design requirement. However, a perfect multi-objective optimization algorithm is prerequisite for good solution.

For the sake of accuracy of torque and iron loss calculation of induction machine, the transient FEM is required. In order to overcome the problem of expensive computation cost of optimal design, an adaptive response surface method with an adaptive Latin hypercube sampling strategy has been applied to rotor slot optimal design [12].

Gaussian-MOPSO algorithm is applied to solve model (14) to get the proper Pareto-front from which a designer may select an optimal design based on different requirement [13].

The Gaussian-MOPSO is developed by using social and cognitive time-variant factors, where the velocity of particles is updated based on a truncated Gaussian distribution. The Pareto front from Gaussian-MOPSO algorithm is proved to be uniformly spaced than other counterparts, and be closer to the utopia point.

The detail optimization algorithm developed in this paper is shown in Fig. 2. 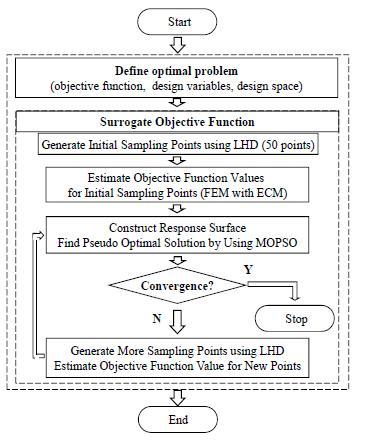 In order to validate the suggested optimal design method, a general purpose three-phase induction machine, shown in Table 1 and Fig. 3, is used.

Table 1.Specification of the induction motor

Fig. 3.Stator and rotor of the three-phase induction motor.

There are several kinds of candidate initial rotor slot shape to be adopted. For the purpose of simplicity, a circular rotor slot is selected without loss of generality.

In the circular slot, the main degrees of freedom characterizing the shape are width (w), height of rotor slot opening (h), and radius of rotor conducing bar (r), respectively, of which design range is listed in Table 2. 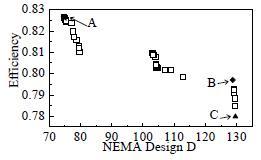 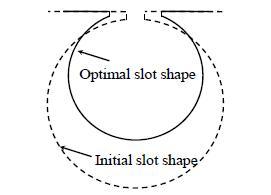 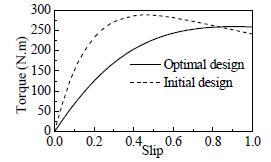 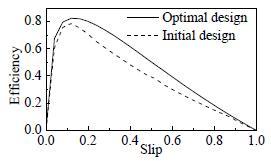 However, the design B is not an only design selection; other designs also can be selected as candidate designs. For example, in Pareto-optimal solutions, the design A or C also can be treated as optimal designs. Fig. 8 shows the torque-speed and efficiency characteristics for design A. It can be seen that this design took more effort on high efficiency instead of NEMA design D torque-speed characteristics. Conversely, the design C takes more effort on NEMA design D torque-speed characteristics than other designs shown as Fig. 9. In the real world, the designer may select one of the candidate designs as optimal design depending on the real application. 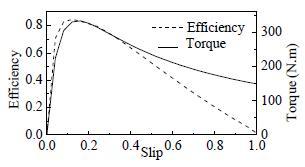 Fig. 8.Torque-speed and efficiency characteristics for design A. 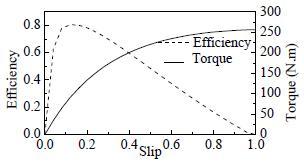