Comparison of ECT Probes in Diagnosis of Defects

In this paper, the characteristics of a defective elliptical aluminum plate are analyzed by three different eddy current testing probes; T/R, T/T, and Impedance probes. The analysis was done by 3D finite element method, and the impedance change of real and imaginary voltage values were analyzed.

Nondestructive testing is one of the most efficient methods used to identify the material of a particle and to diagnose the safety condition. The Eddy Current Testing (ECT), in particular, is effective in determining the status of the surface abnormality of metals. There are many different types of eddy current testing probes, such as the Impedance probe, T/R probe, and T/T probe [1-4]. The number of uses of eddy current testing has been gradually increasing, so it has become necessary to analyze the characteristics and make comparisons between different types of probes. The aim of this research is to identify the characteristics of the ECT probe by using the Impedance, T/R, and T/T probes – which are normally used to identify abnormalities. In order to do so, we have designed the coil sensor and used the finite element method to compare the differences between the real and imaginary values of coil impedance from the eddy current testing. 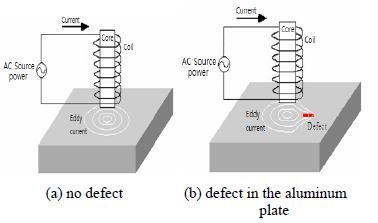 There are two types of eddy current probes; one is the Transmit coil that generates magnetic field to eliminate eddy currents, and the other one is the Receive coil that detects the generated magnetic field to receive the sign as to whether there is a defect or not. In this paper, three kinds of ECT probes are studied; Impedance probe, T/R probe, and T/T probe. The Impedance probe is in charge of a single coil for Transmit/Receive, while T/R probe is responsible for two coils with Transmit/Receive coils for mutual induction. On the other hand, T/T probe is used only for Transmit. Fig. 2 and Table 1 shows three kinds of ECT probes and the functions of each coil. 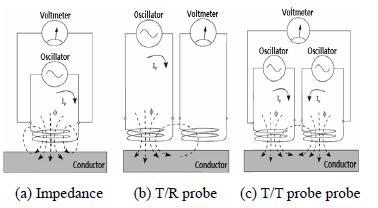 2.2 An analysis of defects by impedance change

To verify the validity of the research, the analysis method was based on the analysis of existing model in former studies with conductivity 22.5 MS/m plate [5]. Also, the dimensions of the Impedance probe coil and defect are shown in Table 2, and the analytical model – a 3D model – is shown in Fig. 3. The defect used in the analysis is an elliptical shape. We have determined whether or not there was a defect by looking at the change in the impedance of coil when the probe moved steadily on the x-axis around the defect. Fig. 4 shows the analysis results by the proposed method. The impedance changes in the defect have different trends in real and imaginary values of the input frequencies. As the frequency increases the defect signal moves in the complex impedance plane in a clockwise direction [5]. It confirms that the result is almost the same as that of the existing studies. In this thesis, non-destructive testing method was proposed and compared with the defect characteristics of the eddy current probe by using the 3D finite element method.

In the analysis, the aluminum plate with conductivity 33.445 MS/m was used as the conductor. The coil sizes of T/R and T/T probe were same. The dimensions of coil and aluminum plate are shown in Table 3. Lift-off of the probe is 0.45mm and coil spacing is 0.8 mm. The input current was selected as 0.28[A], frequency 8.75 kHz. Fig. 5(a), 5(b) show the 3D analysis model using the Impedance, T/T probe for ellipse-shaped defect [6]. Fig. 5 (b) shows the analysis region as the coil travels a distance of 70mm on the x-axis. The defect is placed in the direction of the x-axis. Two types of probes were used to identify the presence of defects. Table 4 shows the dimensions for the ellipse-shaped defect model in Fig. 6. 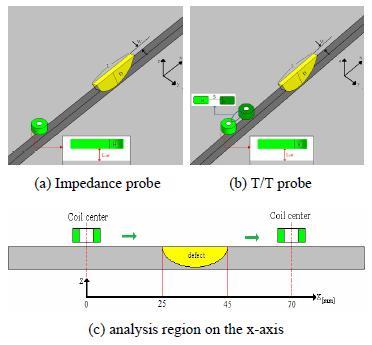 3.2 The analysis of elliptical defect model

The analysis was done by 3-D finite element method, using one of the three types of probes that include defects and moving the Receive coil steadily on the x-axis. Fig. 7, 8, and 9 show the real and imaginary values of voltage drop of the probe coil in the ellipse-shaped defect and the magnetic equipotential lines. 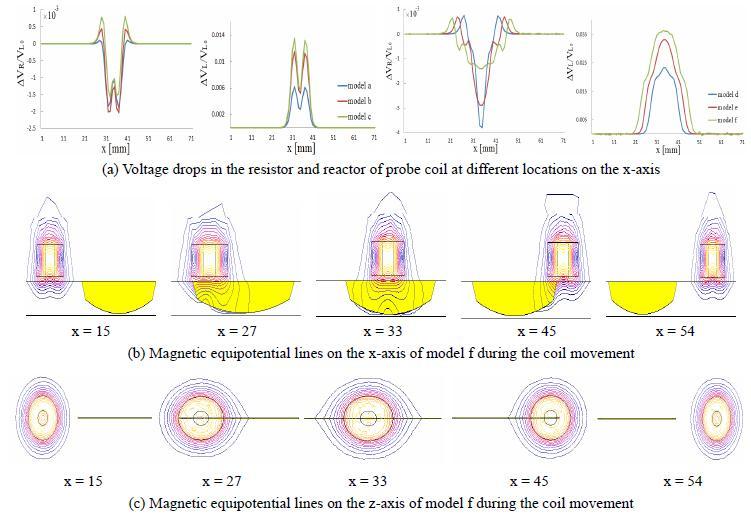 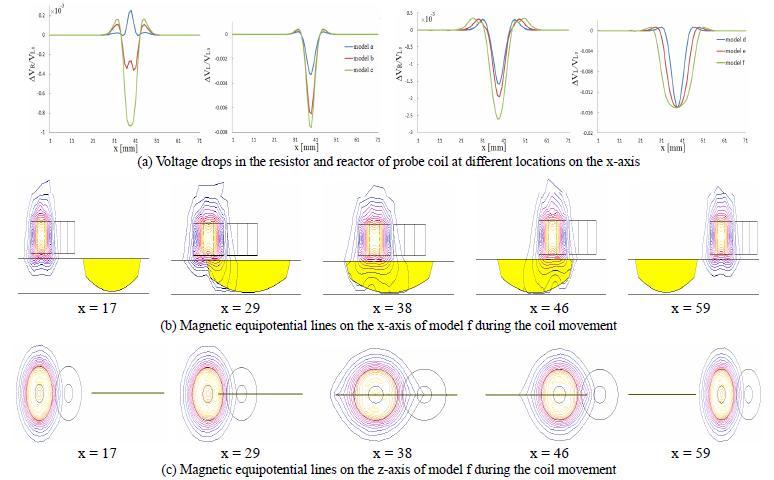 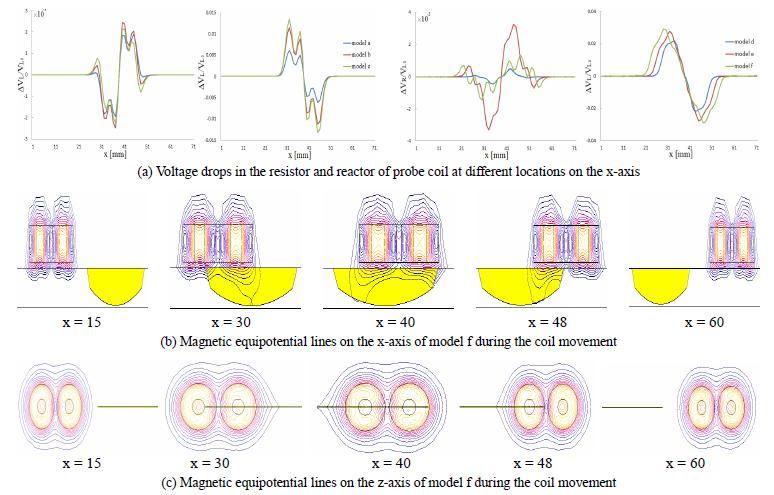 In Fig. 8, it is shown that the T/R probe gives similar maximum change in the imaginary value of the voltage drop if the defect has uniform length. Also, in the defect, the voltage drop changes because the magnetic equipotential line of the Transmit coil leans, which changes the total amount of the magnetic flux that intersects the Receive coil.

The impedance changes of the elliptical defect of the probe were seen under the same conditions; the model for double ellipse-shaped defect and dimensions of the defect are shown in Fig. 10 and Table 5, respectively. 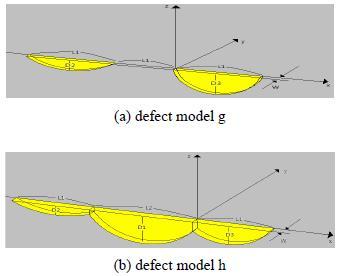 Fig. 11.Voltage drops in the resistor and reactor of probe coil at different locations on the x-axis for model g

Fig. 15.Voltage drops in the resistor and reactor of probe coil at different locations on the x-axis for model h

In this paper, three types of probes – Impedance, T/R, and T/T – that detects the depth, and length of the defect were analyzed using three-dimensional finite element method and different ellipse-shaped defects. We have looked for characteristics of the impedance changes and the magnetic flux equipotential lines. The result of the analysis shows that the Impedance probe is better than T/R, T/T probe in detecting the defects.