Adaptive Maximum Torque Per Amp (Adaptive MTPA) control for induction motor drives seeks to achieve a desired torque with the minimum possible stator current regardless of operating points. This is favorable in terms of inverter operation and nearly optimal in terms of motor efficiency. However, the Adaptive MTPA control was validated only from the viewpoint of tracking a desired torque and was not shown that the desired torque is achieved with minimum possible stator current. This work experimentally demonstrates that optimal condition for Adaptive Maximum Torque Per Amp Control Strategy is achieved regardless of rotor resistance variation.

Highly efficient operation of induction motor has been studied in the past years [1-6]. Among many efforts to obtain optimal performance, an Adaptive Maximum Torque Per Amp (Adaptive MTPA) control of induction motor drives was proposed [7]. One interesting approach to develop an Adaptive MTPA control is to employ an alternate qd induction machine model (AQDM) rather than the classical qd model (CQDM), such as in [8-11]. The Adaptive MTPA control strategy set forth in [7] has demonstrated the ability to achieve the commanded torque with good accuracy, regardless of temperature variation.

However, efforts have been made to develop many control algorithms for tracking a desired torque, particularly in the case of optimal controls [1-6, 8]. Little study has been conducted on the optimality of the MTPA control that the desired torque was achieved with minimum possible stator current [1-6, 8].

The steady-state equivalent circuit representing the AQDM in [14] is shown in Fig. 1. Additional details on the AQDM model and its nomenclature are found in [14, 15]. In this work, the functional forms for AQDM parameters are specified as follows:

The parameters in (1)-(4) of AQDM were characterized by applying fitting process to the functional forms of (1)-(4) on the laboratory experimental data taken for a 4-pole, 460 V, 50 Hp, 60 Hz, delta-connected squirrel cage induction motor. The resultant parameters in (1)-(4) of AQDM for the test induction motor are listed in Table 1 and are illustrated in Fig. 2. Detailed procedures of the parameter identification for AQDM is set forth in [14, 16] but is omitted due to limited space. 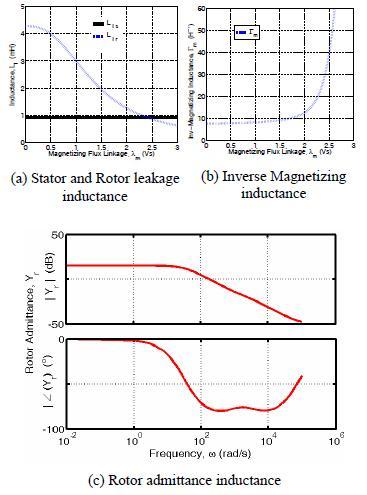 Is and slip frequency ωs , as functions of the commanded torque and rotor resistance estimate as shown in Fig. 3.

Its objective is to produce a desired torque with minimum stator current regardless of rotor resistance. To this end, two properties should be satisfied. One property is the tracking property and the other optimal condition in MTPA control strategy.

The tracking property is to achieve a desired torque at steady states for the current of , the slip frequency of , and the estimated rotor resistance of in the control strategy.

Herein, ε is a very small number. As can be seen in Fig. 4, torques at point B and C does not achieve torque command , resulting in failure of the tracking property. However, torques at points A and A’ satisfies this property. 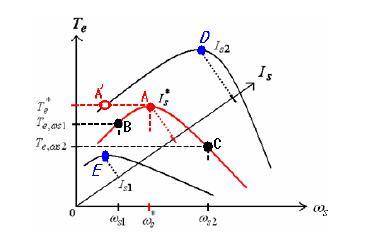 In Fig. 4, the desired torque was achieved at point A’ with Is2 and at point A with . Since Is2 is larger than , operation with has higher efficiency than the one with Is2 due to higher conduction loss. Thus, MTPA condition is satisfied ONLY at A point.

To derive Adaptive MTPA control strategy, we can start by expressing the general electromagnetic torque Eq. (6) in the synchronous reference frame in terms of rms magnitude of the applied stator current Is, slip frequency ωs , and rotor resistance estimate as the generated torque in Fig. 3.

The relationship between the q- axis stator current in the phasor representation, and the q- and d- axis currents in the synchronous reference frame [17] is

By letting all the stator current in the q-axis through appropriate selection of the phase reference, (7) reduces to

where Is is the magnitude of ĩqs. Like relations of currents in (7), the magnetizing flux linkage may be expressed as

After the algebraic manipulation of (6)-(9), the electromagnetic torque may be rewritten in terms of stator current and magnetizing flux linkage phasor as

where the overbar ‘ − ’ indicates complex conjugate.

From the AQDM steady-state equivalent circuit in Fig. 1, is expressed as

With these two non-linear simultaneous Eqs. (13) and (14), torque can be found when ωs, Is, and rr are given. In this work, Newton-Raphson method was utilized to calculate λm (ωs, Is, rr) in (14). But any useful nonlinear algebraic equation solver can be used.

3.3 Derivation of AQDM based MTPA Control

Thus, maximum torque can be obtained by finding optimal slip frequency, for the given stator current, , and rotor resistance estimate, , by applying any optimization technique to (15)

Therein, ωs can be any value in real numbers but confined from 0 rad/s to 4 rad/s by our experience in order to avoid finding a local maximizer. Note that maximization of the torque in (13) for a given stator current means the minimization of the current for a given torque. The processing to solve the optimal slip frequency, , will be repeated for all combinations of Is and rr . It is assumed that Is ranges from nearly 0 A to a somewhat over rated current and rr is selected to vary from 0.01 Ω to 0.21Ω. The j−th point of Is and k−th point of rr will be denoted and rr,k , respectively.

The optimal slip frequency, , for a given pair of (,rr,k) can be obtained by solving (15) with Is and rr replaced by and rr,k. The resulting optimum slip frequency and the corresponding maximum value of torque for and rr,k will be denoted and . These resulting data points are recorded for future data processing and are illustrated in Fig. 5. 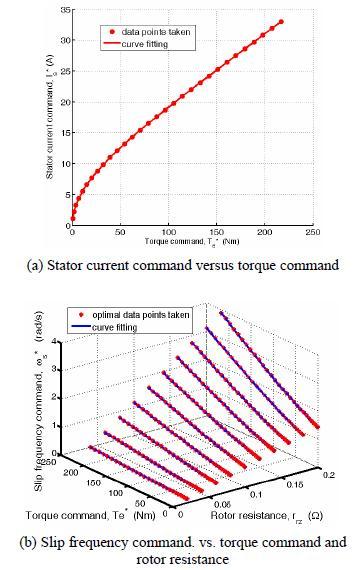 Fig. 5.The control law and data points for Adaptive MTPA control strategy based on AQDM with different rr

where 𝑎1, 𝑎2, 𝑎3 , 𝑏1 , and 𝑏2 are selected by maximizing the objective fitness function fAMTPA defined as

where ε is a small number (10−3 ) added to the denominator in order to prevent singularities in the unlikely event of a perfect fit, NJ is the number of a set of the stator current command selected, and is given by (16) with .

As for the slip frequency ωs , it is a function of rotor resistance as well as the electromagnetic torque as shown in Fig. 5 (b). The data points { , , rr,k } are fit to the functional form

where NK is the number for a set of rotor resistances selected, and is given by (18) with = and . Both (16) and (18) are composed of the AQDM based Adaptive MTPA control law. To obtain coefficients in (16) and (18), any fitting technique could be used. In this work, a genetic algorithm is employed, which was part of the Genetic Optimization System Engineering Tool (GOSET 1.02), a Matlab based toolbox. Details are set forth in [18].

The optimal condition of the proposed Adaptive MTPA control strategy was experimentally investigated. To this end, a current controlled inverter-fed drive was used to operate the test induction motor. The configuration of the motor drive used in this study is depicted in Fig. 6. Therein, the upper part in Fig. 6 is the power converter topology. The lower part is composed of a speed control block with an anti-windup integrator, synchronous current regulator (SCR), and delta modulator, to determine the switching signal for switching devices, T1~T6. 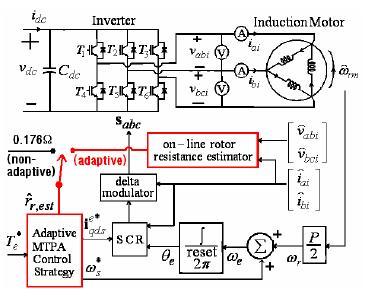 Fig. 6.The configuration of the Non-Adaptive and Adaptive MTPA control based induction machine drive

in [7]. Herein, 0.176 Ω is the value of the rotor resistance at the temperature of 43 ℃ at which the test induction motor was characterized. For convenience purposes, MTPA control strategy is referred to as Non-Adaptive in that the commanded current and slip frequency are not adaptive to rotor resistance variation.

Additional details on the configuration for the drive and nomenclature are set forth in [16]. Fig. 7 shows the experimental set-up for this work. The induction motor being tested is enclosed in the small chamber and is exactly same as the motor used for the dynamometer. 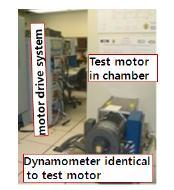 The experiment focuses on a single operating condition. As shown in Fig. 8, the test induction machine was driven at a speed of 900 rpm and the torque command was set to 150 Nm in both cases. The torque estimator used in this work was shown to be highly accurate when the induction motor is rotating at moderate to high speeds [19-20]. 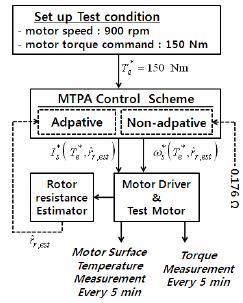 With the experimental setup mentioned above, due to the difficulty in directly measuring the actual rotor resistance of the test motor, the rotor resistance estimator proposed in [21] was utilized and incorporated into the proposed control strategy. 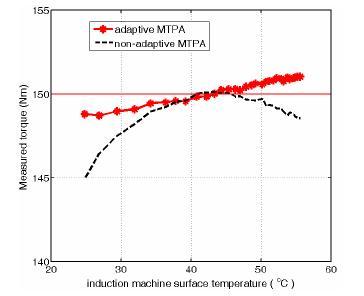 6. Study on Optimal Condition of MTPA Control Strategy due to Rotor Temperature Variation

It would be of interest to investigate how MTPA condition is affected by rotor temperature variation.

Fig. 10 shows that the resultant electromagnetic torques at estimated optimal slip frequency command, , in (22) as well as two additional sets of resultant torques taken at 0.9 and 1.1 times of . In the initial part of each study as in Fig. 10 (a), when the temperature is low and where rotor resistance is smaller than the rotor resistance used to design Non-adaptive MTPA control strategy, the largest torque and closest to the commanded torque was not produced at but at 0.9 times , resulting in failure of MTPA condition. Likewise, at the last part of the studies, the largest torque was again obtained at 1.1 times , which also means failure of MTPA condition. However, for some temperature region, maximum torque per ampere condition is in fact achieved at the estimate optimal slip frequency command . In the middle part of the study as in Fig. 10 (b), when rotor resistance was close to the design value, it can be seen that a slip value of ωs = yields the most torque, thus satisfying MTPA condition. 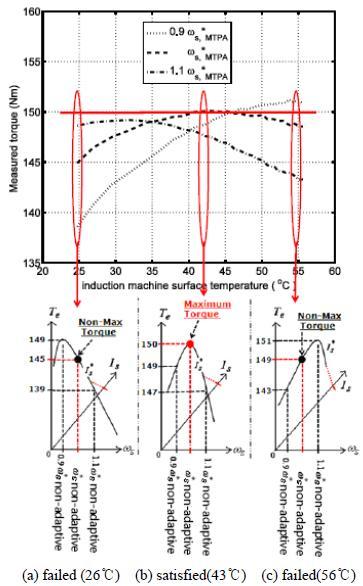 Fig. 10.MTPA conditions along temperature variation with = 150 (Nm) when controlled by Non-Adaptive 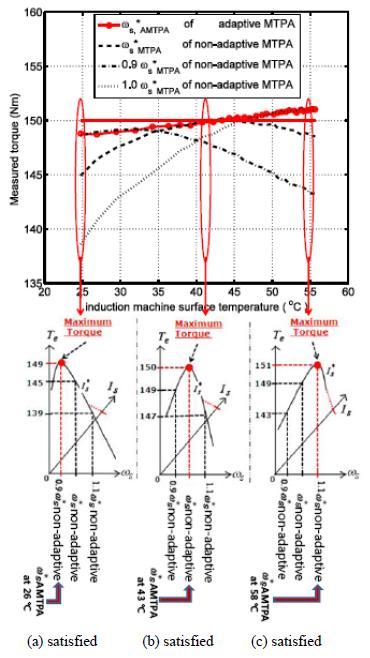 The observations from Fig. 11 indicate that the Adaptive MTPA control strategy satisfies MTPA condition regardless of rotor temperature variation as well as achieve the desired torque accurately as validated in [7].