In this paper, a new two dimensional (2D) analytical modeling and simulation for a Dual Material Double Gate tunnel field effect transistor (DMDG TFET) is proposed. The Parabolic approximation technique is used to solve the 2-D Poisson equation with suitable boundary conditions and analytical expressions for surface potential and electric field are derived. This electric field distribution is further used to calculate the tunnelling generation rate and thus we numerically extract the tunnelling current. The results show a significant improvement in on-current characteristics while short channel effects are greatly reduced. Effectiveness of the proposed model has been confirmed by comparing the analytical results with the TCAD simulation results.

The performance of nanoscale complementary metal-oxide-semiconductor (CMOS) has degraded due to their aggressive scaling [1]. Due to this aggressive scaling the metal oxide semiconductor (MOS) device severely affected by short channel effects (SCEs) such as drain induces barrier lowering and extensive increase in leakage current [2]. Moreover the subthreshold swing of the MOS is limited to 60mV/decade at room temperature [3]. To overcome this, several alternative device structures such as tunnel field-effect transistors (TFETs) [4], impact ionization Metal oxide semiconductor field effect transistors (MOSFETs) [5], MOSFETs with a ferroelectric insulator as a gate oxide [6] and sandwich tunnel barrier FETs [7] have been proposed. TFET is a promising device to replace the conventional MOSFET for low power applications [8]. The applications of TFETs includes implementation on digital circuits like NAND, NOR and in six transistor SRAM memory cell [9].

Due to its built-in tunnel barrier, the TFET device does not suffer from short channel effects, when compared to the conventional planar MOSFET devices [10]. The subthreshold swing of a TFET is less than 60mV/decade at room temperature [11], which is the physical limit of the MOSFET, and in addition, TFETs show a very small leakage current in the range of femto amperes (fA)[12] when the device is turned off. In spite of all these merits, one factor that deters the performance of a TFET is its low ON-current (ION). Therefore various techniques to improve the ION of TFETs have been suggested.

The above works on TFET deal only with simulation and only a few analytical models were proposed. Bardon et al. [19] proposed potential and electric field model for a Double Gate TFET using pseudo 2-D solution. 1-D Poisson’s equation based modeling of TFET has been proposed by Verhulst et al. [20]. Lee [21] proposed an analytical model of Single Gate (SG) TFET using superposition method, which is highly complex for calculations. Analytical models would be useful to provide fast results, together with further insight on the working principle of the device, and to allow circuit simulations [19].

In this paper, we propose a new analytical model for DMDG TFET structure which enhances the ION current during device operation. The aim of this work is, to study the potential benefits offered by the DMDG TFET by using parabolic approximation technique for the first time, which is simple and accurate. The analytical model is developed using two dimensional solution of Poisson equation. This model is used to calculate the surface potential and electric field distribution in the device under the two metal gates and the drain current IDS is derived from the electric field using Kane’s model. This paper is organized as follows: Section 2 shows model derivation of this work. The result and discussions are analyzed in Section 3 and Section 4 contains a summary of the conclusions.

A schematic structure of the DMDG TFET is shown in Fig. 1 with gate metals M1 and M2 of lengths L1 and L2, respectively. The device parameters are listed in Table .1 The source and drain are made of highly doped p-type and n-type regions with carrier concentration of 1020cm-3 and 5×1018cm-3 respectively. The intermediate channel region is made of a moderately doped p-type layer with a concentration of 1017cm-3.The work function of the gate material near the source φm1 is lower than the one near the drain φm2 . This work function variation demonstrates the benefits of high performance proposed DMDG TFET device over their single material gate TFET device [18]. The operation of tunnel field effect transistors is entirely different from conventional MOS devices. The analysis of DMDG TFET operation [18] has been done by considering two separate cases of varying work functions φm1 and φm2 alternatively to get improved IOFF and ION current. 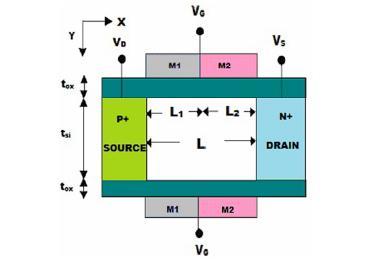 Case (i): In the OFF-state, there is no band overlap on the source side, when the metal work function φm1 is reduced to 4.0 eV, and hence, the IOFF is expected to be quite low. In the ON-state, with the reduction in φm1, the band overlap increases, and the tunnelling width decreases, leading to a significant increase in the tunnelling probability on the source side. Hence the electrons tunnel from the valence band of the p-doped source to the conduction band in the intrinsic body and then move towards the n-doped drain by drift diffusion.

Case (ii): In the OFF-state, as φm2 is increased, the tunnelling width increases, and the band overlap decreases on the source side, leading to a considerable reduction in the OFF-state tunnelling probability. In the ON-state, the increase in φm2 does not change the band diagram significantly. In our model, we assume that the device is operated in the subthreshold region. And there is no assumption made in the depletion of the source and drain region has been assumed.

The only limitation of TFET is the presence of an ambipolar state [22] which means conduction in two directions (i.e. both for positive gate voltage and negative gate voltage). It is caused due to the transfer of tunnel junction from source side to the drain side when the gate voltage VGS<0 for an n-type TFET operation. The basic requirement for an ideal switch in digital circuits is to work in only one direction, but if it also starts conducting in other direction this can create a problem in complementary logic circuit applications and thus limits the utility of the device for digital circuit design.

The potential profile in the vertical direction is assumed to be a second-order polynomial [9], i.e.,

The boundary conditions in the channel region are:

(a) Electric flux at the front-oxide gate interface is continuous for DMG TFET, therefore

(c) The potential at the source and drain end is

In the present analysis, we have two materials in the gate, the 2D potential under Material1 (M1) and Material2 (M2) can be obtained from Eq. (2).

χ is the electron affinity. λ is the characteristics length. This natural length is an easy guide for choosing device parameters.

The coefficients of A, B, C and D can be expressed as

The electric-field distribution along the channel length can be obtained by differentiating the surface potential. The lateral electric field can be written as,

The vertical electric field can be written as

The flow of current IDS in a DMDG TFET is based on Band-to-Band Tunneling (BTBT) of electrons from the valance band of the source to the conduction band of the channel region. The tunnelling generation rate (G) can be calculated using Kane’s model. The total drain current is then computed by integrating the band to band generation rate over the volume of the device [19].

For the calculation of tunnelling Generation rate (G), Kane’s Model has been employed [23], [24].

To verify the accuracy of the analytical model, twodimensional device simulation has been performed by using TCAD Sentaurus [25]. The models available in TCAD to simulate band-to-band tunnelling are Kane’s Band-to-Band model, Hurkx’s Band-to-Band model, Schenk’s Band-to-Band model and the dynamic Non Local Band-to-Band model. In our work the Kane’s model is used to evaluate the band-to-band generation rate [24]. The proposed analytical model, results have been compared with simulation results. Fig. 2 shows the calculated surface potential profile for different gate voltages of the DMG TFET structure along with the simulated potential profile. As the gate voltage increases, the potential in the lightly doped region increases. There is a step-change of potential along the channel at the interface of Metal 1 and Metal 2. It is clearly seen from the figure that due to the presence of gate bias, there is a momentous change in the potential under the gate metal 1. As a result, the gate bias has high influence on tunnelling current at source side. 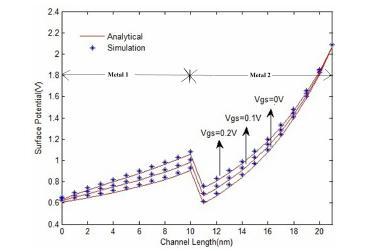 Fig. 3 shows the Variation of potential with the Channel position for different combination of gate length L1 and L2 of Metal 1 and Metal 2, respectively. The peak electric potential shifts towards the source side, when the gate length L1 of Metal 1is reduced. The electric field in the channel is more uniform due to this peak electric potential, as a result the device operates with higher carrier drift velocity. Analytical results are in excellent agreement with TCAD results. 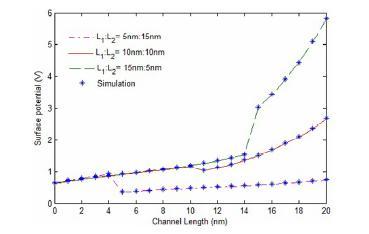 Fig. 3.Variation of surface potential for different combination of gate length L1 and L2 of Metal 1 and Metal 2 respectively. 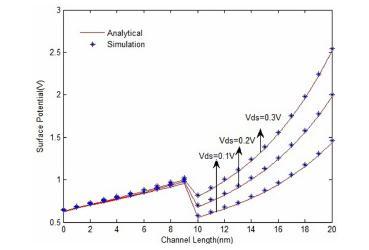 Fig. 5 shows the variation of vertical electric field distribution with the channel position for different values of the gate voltage. It is evident from the figure that peak of the vertical electric field appears near the tunnelling junction. ie., region under metal 1, resulting in a increased tunnelling current. The electric field near the drain decreases with the change in the work function. ie., region under metal 2. Thus the simulation results prove the validity of the model proposed. 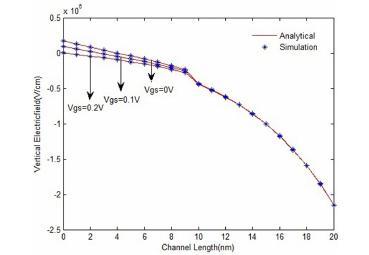 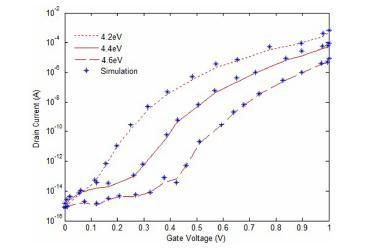 Fig.7 shows the ID-VGS characteristics of DMDG-TFET for various gate metal work functions ( φM2 ) at drain side. The work function of metal M1 ( φM1 ) at source side is kept fixed at 4 eV. It is evident from the figure that the increase in work function of metal M2 at drain side does not affected the tunnelling current significantly. Analytical results are in excellent agreement with TCAD results. Also from fig.6 and fig.7, the OFF state current of the DMDG TFET is in the range of 10−13A-10−15A , which shows that the leakage current, one of the Short channel effect is greatly reduced. 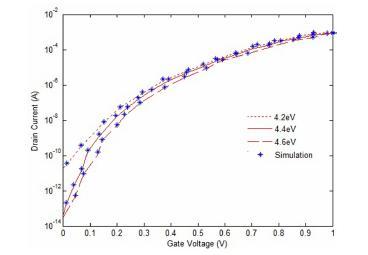 The Comparative drain current analyses of Single gate Silicon on insulator (SOI) TFET [9] and DMDG TFET are shown in Fig. 8. This shows that the DMDG TFET shows better performance by enhancing ION current than the SG SOI TFET. 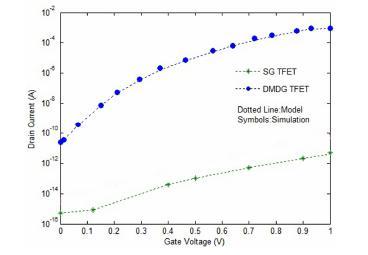