This letter presents a measurement methodology of the complex permittivity of liquid using a partially open cavity in narrow band. The partially open cavity (POC) can measure dielectric small changes caused by the temperature variation of the liquid inside the cavity as well. Using the resonance frequency and unloaded quality factor of the proposed POC, the complex permittivity is evaluated. The apertures on the walls of the cavity are designed to circulate the liquid inside to outside of the POC and located at the corner area of the cavity to minimize the disturbance of field distribution at the dominant mode. The results measured by the proposed POC were compared with those by the conventional open-ended probe and Cole-Cole equation. The POC showed better performance in measuring small dielectric constant changes than the open-ended probe.

With several methods and probes of many types such as coaxial and waveguide transmission lines (T/L), and cavity, many people have researched to know electrical properties such as permittivity and permeability of materials at microwave frequencies [1-5]. If we can know electrical properties of the materials in an area of interest, they will be utilized to predict and analyze electromagnetic effects. And the small change of the permittivity of the materials in the area will affect the electric and magnetic fields distribution, which means that the small change should be measured to increase the accuracy of the field analysis. Most materials have the potential for the permittivity change as the degradation process occurs or the temperature of the materials changes at normal circumstance.

Thus, we may need a more sensitive probe of the cavity type having high quality factor. In order to detect the small permittivity change, a cavity resonator would be desirable since the resonance frequency of a cavity resonator with high quality factor is noticeably shifted even if the permittivity of the material inside the cavity gets changed even below 0.1%. Thus, we have proposed a partially open cavity (POC), which partially has openings to circulate liquid materials at each corner, to measure complex permittivity. If a vector network analyzer to measure the resonance frequency can implement a narrower span over measurement frequencies, one may detect the smaller permittivity changes [7].

In this letter, the introduced partially open cavity probe can be applied to various monitoring systems for an insulating oil degradation, a temperature change of gas tank, and so on [8][9]

The return loss was simulated using HFSS according to the width (t) of the aperture, t=0~6 mm, and the resonant frequency of the dominant mode were compared in Fig. 2. In the EM simulation using HFSS, the test material of the cavity was distilled water whose dielectric constant is 81. As shown in Fig. 2, when t < 2mm, the resonant frequency of the dominant mode is almost same as that of t=0 which is the entirely closed cavity. As the aperture width t increases, the field distributions are disturbed by the apertures because the electromagnetic power is leaked thru the apertures. The wider aperture allows test materials of liquid type to circulate easily, but it causes us to get inaccurate permittivity of the materials due to the distorted field distribution of TE101 mode and leakage power. 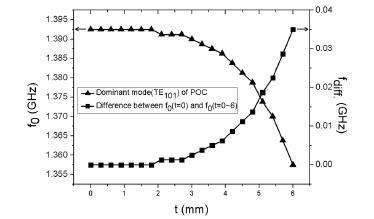 Fig. 2.Resonant frequencies of dominant mode according to t

Considering this trade-off, we have chosen the aperture width as 1 mm, which is about one twentieth of a guided wavelength of the 1st resonance mode. We assume that the cavity with the width, 1 mm, is the same as the entirely closed cavity when considering the graph of Fig. 2. 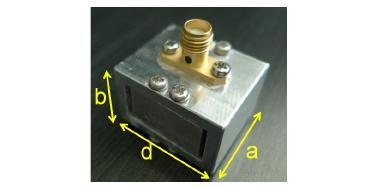 Consider a rectangular cavity whose dimensions are a, b and d filled with dielectric material whose dielectric and magnetic constants are and , respectively. The resonant frequency of mnl mode of the cavity is given as (1).

where kmnl is a resonant wave number [10] and m=1, n=0, and l=1. Eq. (1) can be expressed as (2) including a calibration factor, Cf that is to calibrate the square root term including the physical length factors such as a, b, and d, by multiplying Cf. It was difficult to precisely fabricate the POC, which is very small size, about 20 mm. Once we know the and of a reference liquid inside the rectangular cavity and the resonant frequency f are measured, the physical length error can be calibrated with the calibration factor, Cf.

The reference liquid used in this letter is distilled water whose complex permittivity is calculated by Cole-Cole Eq. [1]. Once the resonant frequency is measured with the rectangular cavity, the Cf would be derived.

One of the main drawbacks of the proposed technique is that it can be applied in a narrow band because of the use of cavity resonance.

The unloaded Q can be derived as

If the denominator of the first term in (5) is large enough, the loss tangent, the second term, can be obtained by only deriving unloaded Q of a rectangular cavity.

In this letter, we used saline as a test material that is a mixture of distilled water and NaCl and made three kinds of the test materials whose salinity are 0.3, 0.6 and 0.9%, respectively. The results, and tan𝛿, measured by the POC were compared with those by open-ended coaxial probe and Cole-Cole equation as shown in Table 1.

Table 1.Comparison of calculated and measured complex permittivity (at 23℃)

We immersed the POC and open-ended coaxial probe into test materials, saline, in a beaker, and measured the return loss of those probes in order to measure complex permittivity. The proposed POC has a calibration process using only one reference material, distilled water, as (2), whereas the open-ended coaxial probe used three materials, air, methanol and distilled water for the calibration. The measurement of complex permittivity using the proposed method showed the error of less than about 6% [1]. 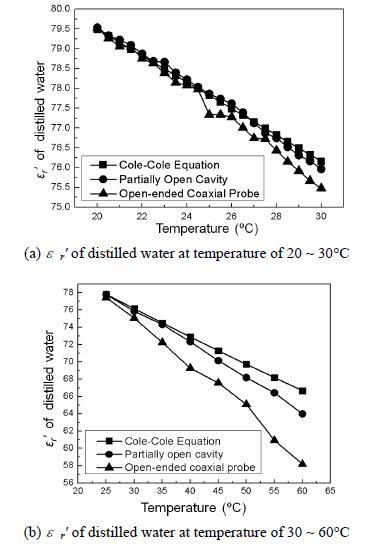 Fig. 4.Measured and calculated ɛ r' as function of temperature

The measuring technique with a partially open cavity (POC) was introduced to measure complex permittivity in a narrow band and to monitor any small dielectric constant changes as the temperature is slowly rising; it also demonstrated its feasibility by comparing with the conventional technique using open-ended coaxial probe and Cole-Cole equation.