With the rapid advancement of mobile communication systems, various services have been required and subsequently realized for mobile phone applications. Trends in miniaturization and high-efficiency have led to the miniaturization of antennas. These improvements of the antenna had limited with only circuit application. Antennas have been miniaturized by using various methods – using meander lines or slots, dielectric loading, and so on [1]. Size reduction of the antenna leads to decreased bandwidth. Size reduction using meander lines or slots degrades antenna performances such as a bandwidth and efficiency. The dielectric loading technique degrades antenna performance and consequently, limits the increase in permittivity. A thick dielectric substrate increases the surface wave energy or stores the energy within itself to decrease the antenna gain. Magneto-dielectric materials raise the hope that the fundamental limitations on electrically small antennas might be abrogated. Electrical wavelength, size and bandwidth of an antenna are related to relative permittivity (ε) and relative permeability (μ) [2]. The operating frequency and bandwidth of an antenna are determined as follows [3].

where, c is the velocity of light, L is the length of a patch, t is the thickness of the substrate and λ0 is the wavelength in free space.

From the equation of the operating frequency and bandwidth, high permittivity or high permeability materials would be preferable for antenna size reduction but they would also decrease the bandwidth or increase the loss tangent, respectively. However, materials which have relatively high and similar values of permittivity and permeability can reduce size without decreasing bandwidth. Hexagonal Ba-ferrites are widely suggested as materials for small antennas. There are several type of Ba-ferrites: M-type (BaFe12O19), W-type (BaM2Fe16O27, M : Co, Zn etc.), Y-type (Ba2M2Fe12O22) and Z-type (Ba3M2Fe24O41), which all depend on the composition ratio. These ferrites have different crystal structures [4]. Among these Baferrites, the Co2Z ferrite (Ba3Co2Fe24O41) has a relatively high permeability and resonance frequency. However, the single phase of the Co2Z ferrite cannot be synthesized easily because of its complex crystal structure [5].

In this study, we investigated the structural and microwave properties of Mn added Co2Z ferrite, Ba3Co2-2x Mn2xFe24O41 (0.1 ≤ x ≤ 0.5), according to sintering temperature and amount of Mn addition. All magnetic ceramics were prepared by the solid-state reaction method. Microstructural and microwave properties were investigated using X-ray diffraction patterns (XRD), scanning electron microscopy (SEM) and a network analyzer.

In this paper, all samples of Ba3Co2-2xMn2xFe24O41 ceramics were manufactured by the solid-state reaction method and their microwave characteristics were estimated by using the HP network analyzer.

The starting materials for the synthesis of the samples were highly purified BaCO3, CoO, MnO and Fe2O3 with purity higher than 99.9%. The purified BaCO3, CoO, MnO and Fe2O3 were stoichiometrically weighed and ball-milled for 24 hours with alcohol medium and zirconia balls to form the Ba3Co2-2xMn2xFe24O41 (0.1≤x≤0.5) powders. The mixed powders were dried and calcined at 1000℃ for 3 hours. The calcined Ba3Co2-2xMn2xFe24O41 powders were re-mixed for 12 hours. The re-mixed powders were uniaxially pressed into a toroid of 5 mm in inner diameter and 10 mm in outer diameter under the pressure of 1 ton/cm2. The toroid was sintered in air at 1250℃ for 3 hours and polished.

The bulk densities of the polished samples were measured using the Archimedes method with distilled water. The crystalline structures were analyzed by X-ray diffraction patterns using CuKα emission. The power of the X-ray was 20 kV/ 20 mA and the step size and scan speed were 0.1 degree and 2 degree/min., respectively. The microstructures of the polished and thermally etched surfaces were observed by the scanning electron microscope (SEM). The relative permittivity (ε´), relative permeability (μ´) and loss tangents (ε˝/ε´, μ˝/ μ´) were measured using the coaxial air-line method [6] and calculated by the NRW algorithm [7, 8]. A HPE5071B network analyzer was used to measure microwave characteristics.

The X-ray diffraction patterns of the Ba3Co2-2xMn2xFe24O41 ceramics sintered at 1250℃ are depicted in Fig. 1. The Z-type, Y-type and W-type phases existed in the calcined Ba3Co2-2xMn2xFe24O41 powders [9~11]. These XRD patterns matched phase diagram of the BaO-CoO-Fe2O3 ternary system [12]. The diffraction peaks of the Ba3Co2-2xMn2xFe24O41 ceramics sintered at 1250℃ were similar to the peaks of a sample of commercial barium hexagonal ferrite (Trans-tech Co.). The sintered specimens showed the Z-type phase as the main phase and showed no secondary phases. These results were due to the sufficient heat energy of 1250℃ to form the Z-type phase, which had a complex crystal structure. The two secondary phases, which showed up in the calcined powders, combined together to form a new Z-type phase in the sintered ceramics. Mn addition did not induce additional new phases or secondary because Mn did not exist as a new phase but at a permeated Co site. These results show that Mn additions do not change the crystal structure of Ba3Co2-2xMn2xFe24O41 ceramics. 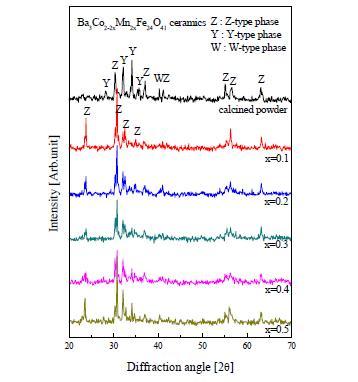 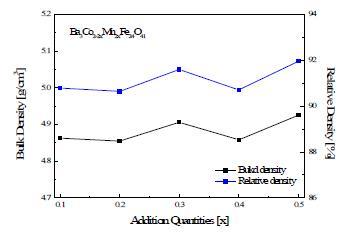 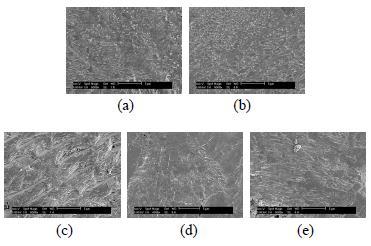 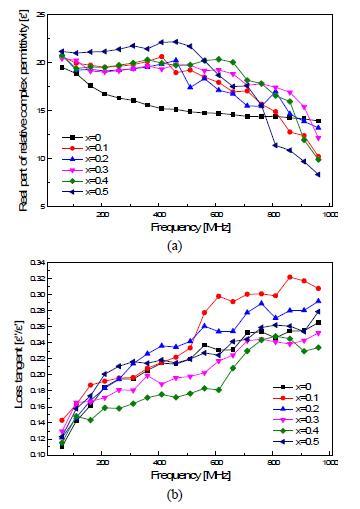 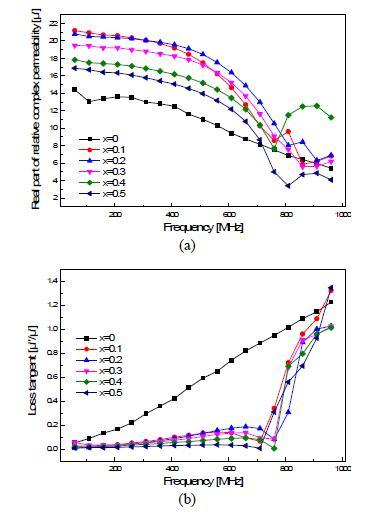 To investigate the feasibility of magneto-dielectric ceramics as materials for the antenna component, the antenna was simulated with CST (Computer Simulation Technology), which is used as a 3D electro-magnetic analysis tool. Fig. 6 shows the antenna structure (a) and a detail view of the radiating element (b) with the Ba3Co0.2Mn0.8Fe24O41 ceramics as the carrier. The suggested structure of the antenna was the Planar Inverted F Antenna (PIFA) structure. The PIFA structure is used for internal antennas because it has advantages such as convenient impedance matching and frequency modulation. PIFA is constructed with a ground, radiator, feed line, short pin and carrier. In an antenna system, FR4 (permittivity: 4.4, permeability: 1) is mostly used as the dielectric material, especially as the carrier material in PIFA, because of its low price. In this paper, we changed the carrier material from FR4 to the Ba3Co0.2Mn0.8Fe24O41 ceramics to confirm the effect of magneto-dielectric ceramics on antenna performance. The size of the designed antenna was 50× 10× 3 mm3 and that of the ground was 50 × 90× 1 mm3. 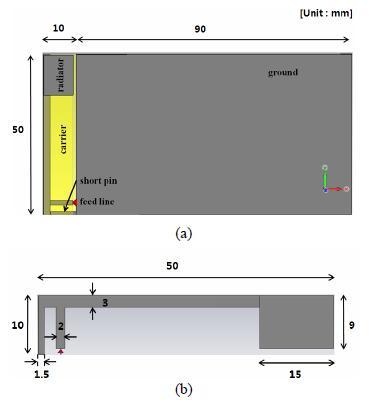 Fig. 6.Suggested PIFA structure: (a) antenna and (b) radiating element 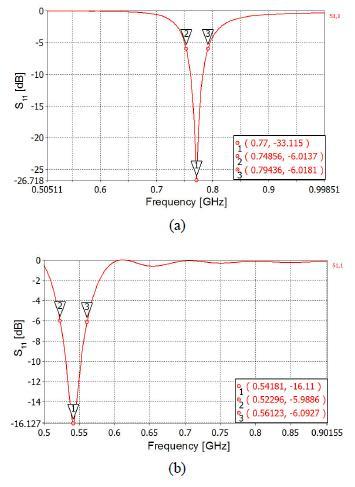 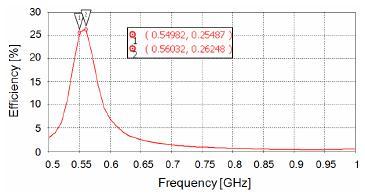