We present a full finite element analysis for plasma discharge in etching process of semiconductor circuit. The charge transport equations of hydrodynamic diffusion-drift model and the electric field equation were numerically solved in a fully coupled system by using a standard finite element procedure for transient analysis. The proposed method was applied to a real plasma reactor in order to characterize the plasma sheath that is closely related to the yield of the etching process. Throughout the plasma discharge analysis, the base electrode of reactor was tested and modified for improving the uniformity around the wafer edge. The experiment and numerical results were examined along with SEM data of etching quality. The feasibility and usefulness of the proposed method was shown by both numerical and experimental results.

Plasma etching and deposition are currently in widespread use in the manufacturing process of semiconductor circuit. Despite of the importance of plasma processing, however, a gas glow discharge is not well understood. This comes from the non-equilibrium nature of the plasma, and the complex interaction among potential field, transport phenomena, plasma chemistry, and surface reaction kinetics. Therefore, design of plasma reactor is still based on empirical approaches. Main requirements of plasma etching include high etching rate, uniformity, anisotropy, and selectivity [1]. However, it is very difficult to satisfy all of the above requirements simultaneously. In addition, as the wafer size continues to increase, it becomes more difficult to satisfy uniformity and anisotropy.

Recently, there has been increasing interest in developing mathematical models and numerical analysis of the plasma process in an effort to better understand the process and to improve the design of plasma reactors. The most frequently used algorithms are the hydrodynamic diffusion-drift model incorporating flux-corrected-transport (FCT) method and particle-in-cell (PIC) method [2-6]. In this paper, we proposed a full finite element approach where the charge transport equations of hydrodynamic diffusion-drift model and the electric field equation were numerically solved in a fully coupled system by using a standard finite element procedure for transient analysis[7-11]. Numerical technique for the hydrodynamic diffusion-drift modeling using charge transport equations is used in various applications such as corona discharge, heat transfer and cooling effect of heavy electric machines [12-14].

The proposed method was applied to a real plasma reactor in order to characterize the plasma sheath just above a targeted silicon wafer. The plasma sheath is closely related to the yield of the etching process since it accelerates the bombing ions, whose motional properties determine the etching quality such as uniformity and anisotropy. In this work the base electrode of the initial reactor was also modified to improve the edge effect deteriorating the uniformity, and its experiment results of etching quality were compared with ones of the initial one by examining data of SEM (scanning electron microscope).

Fig. 1 shows a cross-sectional diagram of the chamber for dry etching process. A wafer is placed between two electrodes. The upper electrode is connected to a voltage source and the lower one is set as ground. The electrodes supply external energy into the chamber for generating and sustaining the plasma. The electric field between the electrodes is downward and drives charge carries. The plasma sheath is formed just above the wafer and it accelerates heavy irons that bomb the wafer surface for etching. But the electric field above the wafer is not uniform in intensity and direction because of the fringing effect on the edge side. 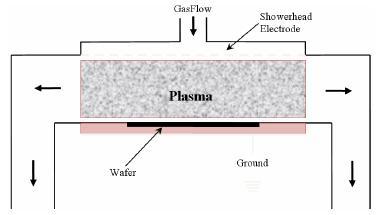 Fig. 1.Schematic view of wafer etching reactor. Plasma sheath is formed just above the wafer and it accelerates heavy ions that bomb the wafer surface. Electric field above the wafer is not uniform in intensity and direction because of the fringing effect around the edge side.

In this work, the uniformity of electric field was improved by substituting an existing quartz ring, which was located below the wafer, with an aluminum ring.

The simplified expressions of governing equations for the plasma discharge can be analyzed by using the hydrodynamic diffusion-drift model for the concentration of the electron (Ne), positive ions (Np), and neutral ions (Nn) as where t denotes the time, Ve, Vp, and Vn the electron, positive ion, and neutral ion drift velocities,and α, β and 𝛾 the material functions for theionization, recombination, and concentration of new supplied gas, respectively. S denotes the source term, and here its effect was neglected. Diffusion effect was also neglected because it doesn’t have any significant effect [2]. We, however, used the artificial diffusion scheme to avoid the numerical discontinuity caused by the shock wave at the front of space charge propagation. These three given continuity equations were transformed by incorporating the artificial diffusion term and were then solved along with the Poisson’s equation, resulting in new expressions for electric field distributions each time as exhibited by the following expression as where ε is the dielectric permittivity, e the electron charge, and V the electric scalar potential.

Table 1 shows the material functions used in this simulation. The velocities of each carrier were expressed as the electric field dependent problem. The coupled parameter between charge continuity equations and Poisson’s equation is the electric field intensity, E . Therefore, to analyze the plasma discharge process, those equations were fully combined with each other and solved simultaneously with each time step. The ion-secondary emission coefficient was employed as 0.01 which was estimated by von Engel [2].

To verify our numerical setup, we first tested 2-D analysis model of which the analysis conditions and the initial conditions are shown in Table 1, Table 2 and Table 3, respectively. While the electric field applied to this analysis region, the carriers flow along with the electric field line because this is electric field dependent problem as we can the governing equations, (1). Therefore, the positive ions move toward the lower electrode and the electron move toward the upper electrode. When the positive ions are induced and bombarded at the lower electrode, it generates an additional electron flux, called the secondary emission. 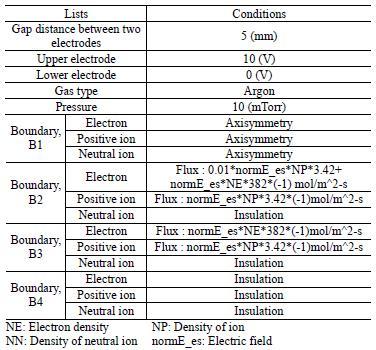 Fig. 1 shows the analysis model with 2-D axi-symmetrical structure. The variation of electric scalar potential was depicted in Fig. 3. The distribution of the electric potential was linear at the initial time, but the potential in plasma region increased much higher than other electrodes with time. Because there was no more change in plasma region after 1e-4 (s), the plasma status was reached at a stable point. Fig. 4(a) shows the electron and ion densities after 1 (s). Except around electrodes, the neutral region can be viewed widely. Around the electrodes, the density of a positive ion was higher than that of electron, which is the plasma sheath region, as shown in Figs. 4(b) and 4(c). Because the electric potential in plasma region is higher than other places, the electric field will be formed and it accelerates the Argon ions toward the electrodes resulting in the secondary electron emission. 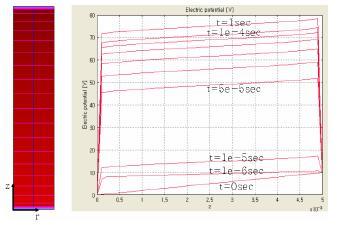 Fig. 3.Variation of electric potential as a function of time. 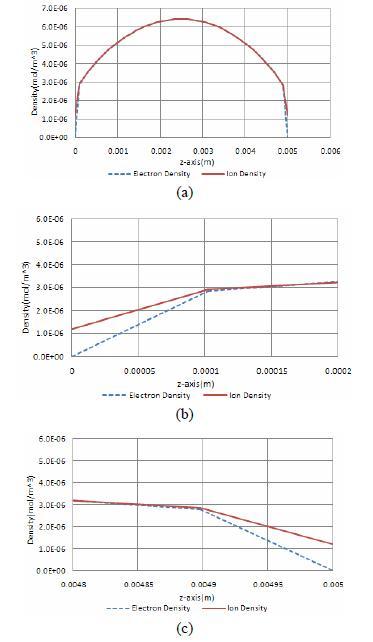 After verification the plasma process in two-dimensional problem, here, the proposed method was applied to axi-symmetric model with a real vacuum chamber as shown in Fig. 5. The distance between the wafer and the upper electrode was 30 (mm) and the diameter of wafer was 300 (mm). 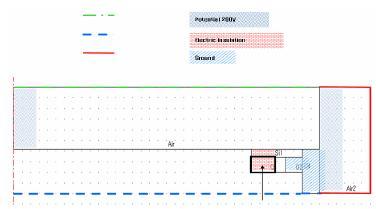 Fig. 7.Comparison of electric field distributions when the Q1 block is (a) quartz and (b) aluminum ring.

Fig. 8.Radial component of electric potential distribution on etching target with the radius and trend line for (a) quartz and (b) aluminum block.

The degree of parallelization of eq-potential line and upper side of the etching target is improved when the Q1 block is aluminum. So, an incidence angle is changed to 2(deg) from existing 6(deg.).

Therefore, we replaced the quartz with aluminum as shown in Fig. 9 and Fig. 10. Fig. 9 shows the SEM images of wafer trench in the existing quartz block at the wafer center and wafer edge. After this modification, the uniformity of electric field near wafer edge was improved. The SEM images of wafer trench with the improved aluminum block show the dramatic enhancement in etching process as shown in Figs. 10(a) and 10(b).

Fig. 9.SEM images of wafer trench in the existing quartz block (a) wafer center, and (b) wafer edge.

Fig. 10.SEM images of wafer trench in the improved aluminum block (a) wafer center, and (b) wafer edge.

We presented a full finite element analysis for plasma discharge in etching process of semiconductor circuit. The charge transport equations of hydrodynamic diffusion-drift models and the electric field equation were numerically solved in a fully coupled system. A plasma reactor was analyzed and was newly designed to improve the uniformity of etching. To decreasing the edge effect due to field fringing, Q1 block material was changed from Quartz(dielectric) to Aluminum(conductor). SEM data showed the improved etching quality on the edge side of wafer. The feasibility and usefulness of the proposed method was shown by both numerical and experimental results. Also, more detail issues like design technique for reactor will be suitable for another version.