Sensor fault detection and isolation problems subject to H_/, performance are concerned for linear time-invariant systems with time delay in a state and parametric uncertainties. To that end, a model-based observer bank approach is pursued. The design conditions for both continuous- and discrete-time cases are formulated in terms of matrix inequalities, which are then converted to the problems solvable via an algorithm involving convex optimization.

Fault detection and isolation (FDI) for dynamic systems holds a major field in the modern control theory academia, due to the ever increasing demand from industry for higher safety and reliability standards [1-3]. A great deal of research works on FDI has been released from different points of view, among which a successful one is a model-based observer approach using effective design tools that have been accumulated in the field over decades. See [2] and good references therein.

When dealing with single-output systems, isolating a fault on a sensor is identical to detecting one. On the other hand, it is more complicated in multi-output systems, because constructing a non-interactive map (diagonal transfer matrix for the linear time-invariant (LTI) case) from faults to residuals is particularly challenging, even if the system is LTI [4]. A simple yet effective alternative could be a scheme via an observer bank, where as many observers as sensors are involved [5]. The residual generated by each observer in the bank should be as sensitive to the faults on all sensors except each one and as robust against disturbance, as possible, in a reasonable (for example, an H_ and an H∞ [6-10]) sense. Then the fault can be isolated based on a suitable voting scheme [5, 11]. However, time delay and uncertainty which are widely believed to exist in physical model configurations [12] could be as the major obstacles against satisfactory FDI.

Paper [5] introduces an application of the observer bank-based FDI method to load-frequency control problem without deliberating time delay, uncertainty, nor any performance index. In [11], a robust FDI for a robot manipulator is developed, where the residual sensitivity to the fault is considered in the H∞ sense. A solution to FDI is presented in the frame of H∞ model-matching in [13]. However, these referred works do not consider the time delay. Besides, although a fault detector, rather than an isolator, is designed with delays and/or uncertainties in [1, 14-16], available literatures are relatively few for the FDI of LTI systems with the time delay and the uncertainty in the H_/H∞ criterion. This motivates our present study.

In this paper, we concern design conditions of the H_/H∞ sensor FDI observer banks for continuous- and discrete-time LTI systems subject to the time delay in the state and the parametric uncertainty. The bank is composed of the sensors’ number of observers. Both the observer gain and the residual gain (that is not necessarily symmetric or triangular due to additional manipulation such as the matrix square root or a Cholesky factorization) are taken into account as the design variables. Sufficient conditions to find the gains are developed in terms of matrix inequality. An algorithm involving a convex optimization is presented based on the cone complementary linearization technique [12].

We follow standard notations: A = AT ≺ 0 is a negative definite matrix. ‖x‖ stands for a Euclidean norm while ‖x‖ℒ2 means the ℒ2 norm. Symbol * denotes a transposed element in a symmetric position. Ellipsis He{S} := S + ST is used for simplicity. For any vector y ∈ ℝm and matrix C ∈ ℝm×n , we define as follows:

where x ∈ ℝn is the state; y ∈ ℝm is the sensor output; d ∈ [0, du ], du ∈ ℝ>0 , is the known time-varying delay; and w ∈ ℝl and f ∈ ℝm belonging ℒ2 to are the disturbance and the sensor fault, respectively. Matrices ΔA, ΔB , and ΔC represent the parametric uncertainties that satisfy the following assumption:

where ■ means no restriction on that entry, F1, F2, E1, and E2 are known constant real matrices of appropriate dimensions and 𝝨 is time-varying real matrix satisfying 𝝨T𝝨≼I

Without loss of generality, assume the observability of (A, C). We introduce an m-observer bank in which the pth member should detect all faults on all sensors excluding the pth one. Such a requirement is realized if the pth observer takes the following form

Let e := x− and . The residual is then generated by the following augmented error dynamics

For excellent FDI, (2) is desired to be designed so that the effect of to r is encouraged and the effect of w to r is attenuated. In connection with this, we recall the following performance measures:

For a map from w to r , the H∞ performance is defined by

Definition 2: Let the evaluation function be

and the threshold function be

where TW ∈ ℝ>0 is the constant time window. In cases where it is necessary to display explicitly the association of Jr and Jth with the residual from the pth observer, we write Jrp and Jthp , respectively. Define an FDI logic as Table 1.

Problem 1: Given the fault sensitivity level β ∈ ℝ>0 and the disturbance attenuation level 𝛾 ∈ ℝ>0 , find L and H in (2) so as to satisfy

We recall the following lemmas, before proceeding further.

Lemma 3: For any compatible matrices Q, R, , and Ȓ, the following inequality holds:

Proof: It is readily proved as follows:

Now, we summarize the main result on Problem 1.

from 0 to ∞, the following relation holds

where we have used Schur complement, the congruence transformation, and Lemmas 2 and 3. ■

Remark 1: The matrix inequalities in Theorem 1 are not linear due to the terms ĤĤ and − PZ−1P . It provokes a non-convex feasibility problem that is generally difficult to solve. One may simply attempt to find a feasible solution set through a tractable convex optimization algorithm after recovering their convexity. For instance, we could set Ĥ = I and P = Z, which however, may produce a quite conservative design result.

In what follows, we alternatively solve the problem to obtain a better result based on the cone complementary linearization technique [12]. Introduce V and S such that ĤĤ ≽ V and PZ−1P ≽ S or

Then, the problem concerned above is converted to the following nonlinear minimization one involving LMIs:

In this section, we discuss the FDI problem in the discrete-time domain. Consider the following discrete-time uncertain time-delay LTI system:

is desired to be designed to possess the ( β, 𝛾 )- H_/H∞ performance in the l2-norm sense. The augmented error dynamics is written as

Then the gains are given by .

Proof: Define the positive definite function Vk:=V1k + V2k+V3k+V4k, where and

In case of is written as

Summing up the discrete-time H—J—B inequality

where we have used Schur complement, the congruence transformation, and Lemma 2. This also implies the asymptotic stability of (17). Finally, it is not difficult to prove that (21) is the sufficiency for the β-H performance in the l2-norm sense when one considers (22) with wk = 0 to induce the following inductions

where we have used Schur complement, the congruence transformation, Lemma 2, and Lemma 3 with the assignments , R := H, , therein.

Though the design condition in Theorem 2 is casted in a nonlinear form, it can be efficiently solved by convex optimization algorithms in a manner similar to Algorithm 1 through the following conversion.

Consider the state-space data for (1) borrowed from [15]

and du = 1. We further suppose by Assumption 1 that ΔA, ΔB, and ΔC and are decomposed as

for 50 s . Set Twp = 3 , then the threshold is generally calculated as

under the zero-initial condition for both the system and the observer bank.

Three cases are simulated to investigate the validity of the designed bank. 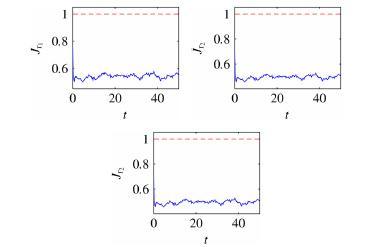 ii) Next, we simulate the fault-activated-disturbance-free case. In this case, the threshold is modified to 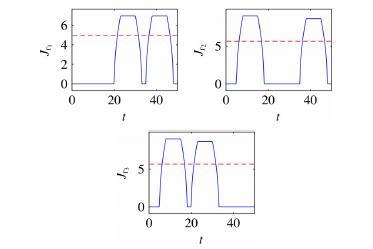 iii) Now, we consider the fault-disturbance-activated case. The fault and the disturbance data applied in the previous runs are activated at the same time. Analyzing the result in Fig. 3 with the threshold 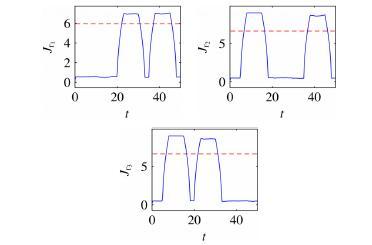 iv) To highlight the benefit of the proposed method, we simulate a comparable scheme, Theorem 1 in [18] that does not consider the time-delay nor uncertainties. By this technique we compute

and apply them to the fault-disturbance-activated case. As shown in Fig. 4, the compared only isolates f1 for t ∈ [4.87, 19.89) For the rest of the simulation-run time, any isolation is not declared but detection is kept alarmed although there exist no fault for t ∈ [30.35) and t ∈ [45,50), which less accurate than ours. 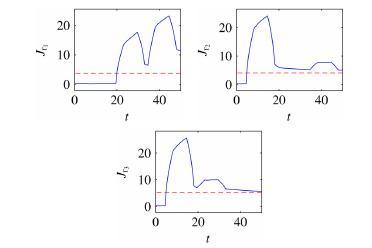 In this paper, we presented the H_/H∞ FDI observer bank design techniques for uncertain time-delay LTI systems for both continuous- and discrete-time settings. Design conditions are developed in the format of LMIs using the cone complementary linearization algorithm. Simulation results convincingly demonstrated the effectiveness of the developed methodology.