Navigation system is used to guide the robot towards the target point without any collision with obstacles. These robots have provided solutions to complex tasks such as planetary or underwater exploration [1, 2] operation in urban environments [3] and unmanned flight [4] which were considered only achievable by humans. In each of the above fields, remote navigation plays a vital role in the success of the robots.

Fuzzy logic techniques have been used in many mobile robot navigation, since the traditional solutions for path planning and navigation have failed for complicated environments [5, 6]. Joo et al. [7] have designed an approach to build multi-input and single-output fuzzy models. Genetic algorithm hybrid scheme is used to define the parameters of fuzzy implications and to minimize mean square errors. The proposed approach has also been applied to construct a fuzzy model for the navigation control of a mobile robot using DC motors.

Fraichard and Garnier [8] have presented motion control architecture for a car-like vehicle planned to move in dynamic and partially known environments. They have used fuzzy logic technique, whose major component is a set of fuzzy rules encoding the reactive behavior of the vehicle. They have successfully navigated the car-like vehicle with use of fuzzy logic technique.

Huq et al. [9] have proposed a novel approach to combine motor schema and fuzzy context dependent behavior modulation for mobile robot navigation. Their approach eliminates the existing problems of motor schema such as trap situations due to local minima, no passage between closely spaced obstacles, oscillations in the presence of obstacles and oscillations in narrow passages.

S.K. Pradhan et al. [10] have developed fuzzy logic controllers for navigation of multiple mobile robots in presence of static and moving obstacles. Their proposed approach extracts set of fuzzy rules from a set of trajectories provided by human and to help the robot to avoid obstacles and find targets. They have connected two motors to two rear wheels and the speeds of the wheels are being controlled by the motor controller interface.

N.S. Kumar et al. [11] have designed a low cost universal artificial neuron controller for chopper fed embedded DC drives. The designed neuron controller is trained with the patterns obtained from the conventional controller. The closed loop operation is simulated with the trained neural network to achieve the desired performance.

General PI and PID controllers are widely used for motor control applications. But they do not give satisfactory results when control parameters, loading conditions and the motor itself are changed. The fuzzy logic controller (FLC) can be designed without the exact model of the system. This approach of FLC design guarantees the stable operation even if there is a change in the parameters and the motor [12-15].

In this paper, a fuzzy logic controller is designed for the online speed control of DC motors which are used for navigation and steering control of remote controlled robots. This task is carried out by specifying a set of rules taking into account the different speeds of a motor. For this purpose the input to the FLC are set speed value and the error produced by the comparison of set speed and actual speed values. The output from FLC is duty cycle of the converter switch. Thus by controlling the duty cycle of the converter switch, the input supplied to the motor is changed and its speed is controlled. IR sensor is employed to detect the obstacle. The sensor status is transmitted to the remote client system from robot through internet. The status of IR sensor helps for path planning and changing the direction of robot. 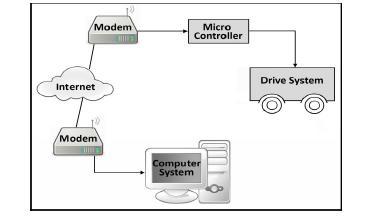 Fig. 2 shows the block diagram of the control system for motors. The system consists of H-bridge converter for driving the separately excited DC Motor in both forward and reverse direction. The performance of DC drive will be based on the choice of controllers. The designed closed loop control has two loops. One is outer speed control loop and another one is inner current control loop. In outer speed control loop, the motor speed is sensed by a speed sensor and fed back to the microcontroller unit. In the microcontroller unit the sensed speed signal is compared with set speed. After comparison, error signal is calculated and this error and set speed are given as input to fuzzy controller. The fuzzy controller will attempt to reduce the error to zero by changing duty cycle of switching signal. Similarly the actual input current of the motor is compared with the reference current using a comparator. This comparator output is multiplied with fuzzy controller output. Thus the duty cycle of switching signal is controlled to achieve the desired speed and current of the motor [16, 17]. Initially, LabVIEW model of the DC motor and the H-bridge converter was developed and simulated to verify the design and its functioning.

When the IR sensor senses the obstacles the set speed of the motors are changed by the control logic to stop its movement towards the obstacle. If the direction given by the remote client is left then the set speed value of left motor will be zero and right motor will be high and vice versa for right direction. When no obstacle is sensed the equal value of set speed is given to both the DC motors and the forward movement is achieved. Thus the steering angle and speed control of the robot is achieved using fuzzy controller.

The motor and H-bridge converter are designed and simulated using equation models.

The DC motor has been modeled using the following equations by state space modeling technique.

The state space model of the DC motor is obtained by choosing ia, ω and θ as state variables.

On arranging the state equations in the matrix form

On relating the outputs to the state variables we get,

Therefore the output equation in the matrix form is

The state Eq. (6) and the output Eq. (7) together constitute the state model of the armature controlled DC motor. Based on the above state equations the DC motor can be simulated using LabVIEW as shown in Fig. 3. 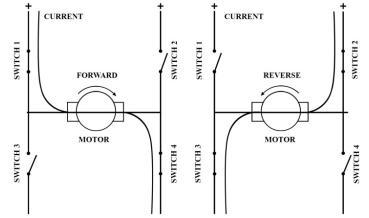 The above two modes of the H-bridge converter is averaged using the fact that the switch 1 and switch 4 are turned on for a period of (D x Ts) over the switching period Ts, where D is the duty cycle. The small signal model is formulated by assuming perturbations , in the steady state values of supply voltage Vs and the Duty cycle respectively. H-bridge converter fed DC drives small signal model is given by the equations

Considering duty cycle as control signal and speed (s) as the output signal, the motor speed transfer function is calculated as

From the above equation, the speed gain is given by

Similarly, when the supply voltage is kept constant, the current gain is given by

So under the assumed conditions the final transfer function of the H-bridge converter fed DC motor is calculated as in Eq. (17).

The conventional PID control schemes are employed by more than half of the industrial controllers in use today. Because these controllers can be adjusted on site, many different types of tuning rules have been proposed. In the proposed system the PID controller is designed for speed control of a DC motor and tuned using Ziegler- Nichols method. The transfer function of the DC motor is derived from the state model of the armature controlled DC motor using the following equation

On substituting the values of A, B, C and D in Eq. (18), the required speed controller transfer function is obtained in the form of Eq. (19).

For the above Transfer function the PID controller is designed and tuned using Ziegler- Nichols method. The tuned values of control parameters are as follows.

In the proposed work, the robot has two DC motors that are connected with rear wheels. It has IR sensor to detect obstacles and to measure the distance between the obstacles and the robot. Control logic is developed to decide the direction of robot movement based on the obstacle distance and to change the speed of the DC motors according to the direction decided. This control logic is implemented using two fuzzy logic controllers. One is used to decide the direction and the other one is used to control the navigation speed of the robot by changing the motor speed. 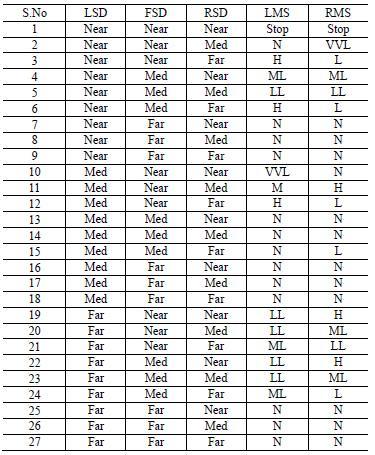 The control rules for direction fuzzy controller are defined as follows:

The symbolic expression for the control rules of fuzzy controller are defined as follows:

From expression (19) two example rules can be written as

The meaning of the above two rules in terms of m-type implication is given as a fuzzy relation R(k) defined on LSD x RSD x FSD x LMS x RMS.

from the above two fuzzy relation (23) & (24) the membership values of the left motor and right motor speed can be written as follows:

The developed fuzzy logic controller has been implemented in a robot as shown in Figs. 5(a) and 5(b). Two tested 12V DC motors were connected with left wheel and right wheel of the robot and they are controlled by fuzzy logic controller. The fuzzy controller has been implemented practically using 16f877A PIC controller. An H-bridge converter IC L293D was used as driver circuit and the fuzzy controller with the H-bridge converter was tested on the DC motor. The DC motors are supplied by 12V, 1.3AH valve regulated lead acid battery. A tachogenerator was used to sense the speed and to achieve closed loop control. Proximity IR sensors have been connected in left, right and front portions of the robot to detect and to avoid obstacles. Robot’s location is monitored using GPS (Global Positioning System) on a real time basis. 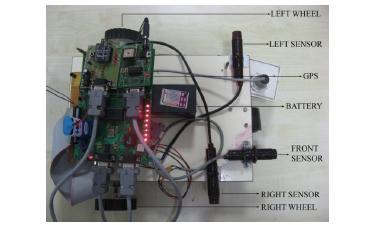 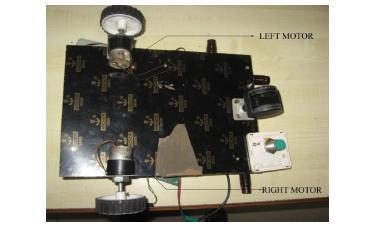 The control logic of developed controllers were implemented in the embedded system and downloaded in to the flash memory of the microcontroller using in system programming technique. By using these controllers two 12V DC motors speeds are controlled to the reference speed value of 10 rpm with various loaded conditions and measured values are plotted in the graph. The experimental results produced by the PID controller are shown in Figs. 10-12 and the results produced by the fuzzy logic controllers are shown in Figs. 13, 14 and 15.

Fig. 10.Graph of PID controller based Robot’s left motor and right motor speed values when it moves in forward direction with the reference speed value of 10 rpm

Fig. 11.Graph of PID controller based Robot’s left motor and right motor speed values for the reference speed value of 10 rpm and step change in load torque from 0to 50 % of rated torque applied at 150 s

Fig. 12.Graph of PID controller based Robot’s left motor and right motor speed values for the reference speed value of 10 rpm and step change in load torque from 0 to 100 % of rated torque applied at 150 s

Fig. 13.Graph of Fuzzy logic controller based Robot’s left motor and right motor speed values when it moves in forward direction with the reference speed value of 10 rpm

Fig. 14.Graph of Fuzzy logic controller based Robot’s left motor and right motor speed values when it moves in forward direction with the reference speed value of 10 rpm and step change in load torque from 0 to 50 % of rated torque applied at 150 s

Fig. 15.Graph of Fuzzy logic controller based Robot’s left motor and right motor speed values when it moves in forward direction with the reference speed value of 10 rpm and step change in load torque from 0 to 100 % of rated torque applied at 150 s

Based on the experimental results, the time-response specifications of fuzzy logic controller and the PID controller are given in Table 3.