A Study on a Healthcare System Using Smart Clothes

Being able to monitor the heart will allow the diagnosis of heart diseases for patients during daily activities, and the detection of burden on the heart during strenuous exercise. Furthermore, with the help of U-health technology, immediate medical action can be taken, in the case of abnormal symptoms of the heart in daily life. Therefore, it appears to be necessary to develop the corresponding technology to monitor the condition of the heart daily. In this study, a novel wearable smart system was proposed, to monitor the activity of the heart in daily life, and to further evaluate the rhythm of arrhythmia. The wearable system includes three modified bipolar conductive fiber electrodes in the chest part, which can resolve the reduction problem of the magnitude of the signal, by magnifying the signal and removing the noise, to obtain high affinity and validity for medical-type usage (<0.903%). The biological signal acquisition and data lines, and the signal processing engine and communication consist of a conductive ink, and the pic18 and ANT protocol nRF24AP2, respectively. The proposed algorithm was able to detect a strong ECG, signal and r-point passing over the noise. The confidence intervals were 96 %, which could satisfy the requirement to detect arrhythmia under the unconstrained conditions.

These days, as interest in health increases, the medical technology to meet this demand, such as e-health concepts, is moving from hospitals to individually oriented systems. Therefore, the interest in ubiquitous technology to monitor health conditions also grows more, and faster [1]. As a first and necessary step toward this technology, measuring the electrocardiogram (ECG), the basic biological parameter, is the most simple but important check of the daily health condition of patients under an unconstrained state.

In particular, it provides the advantage of a health check system with relatively low cost, in the case of hospitalized patients under rehabilitation, using a wearable device [2-5].

Conventional devices regarding this technology provide the wearable function itself, but the current one implemented a detection system of the biological signal in a wearable device using conductive fibers, and satisfies the function of clothes and of U-Health (Ubiquitous Health) [6-7].

Also, wearable technology using conductive fiber electrodes can be almost permanent, but devices using conventional AG /AGCL electrodes should be replaced beyond a certain period, due to the change in impedance caused by the dryness of the gel component.

However, the conductive fiber-based sensor in the wearable device showed several problems, such as thermal noise and interference of 60 Hz power, induced from the noise motion artifacts that occur by breathing, and movement due to very low impedance characteristics.

This noise is relatively higher than the ECG signal, and appears to be similar to PQRST waves distorting the target waveforms, resulting in misdiagnosis.

Compared to traditional methods, motion artifacts are incorporated into the measurement at a much larger scale, and can cause large distortions in the signal, making diagnosis inaccurate, or nearly impossible [8].

Therefore, in this paper we propose a conductive fabric-based wearable cardiac signal monitoring system, which combines output signals from a 3-axis accelerometer, to reduce baseline wander and other noise artifacts.

The signal from the accelerometer is used as a reference signal to an adaptive impulse correlation filter (AICF) algorithm, in combination with a band pass (BP) filter, for more accurate R peak detection.

For this reason, a filter based on the AICF algorithm, to minimize abnormal noise in the signal, was developed through narrowband algorithm detection, and validated against the reference signal.

Furthermore, the filter was implemented in the system, to evaluate the rhythmic signals for arrhythmia.

2.1 Configuration of the measurement system

Since the wearable device is battery-powered, a pic type of microprocessor and nrf24ap2 (Nordic semiconductor, Norway) for the communication module, which satisfy the requirement for low power consumption, were used to configure the circuit.

The overall figure can be limited, because the magnitude of the biological signals is smaller than that of the offset of the electrodes. Therefore, the output signal should be improved, using a first rank AC coupling circuit to obtain high gain and CMR.

In the case of the ECG signal, the gain of the amplifier was set to 5000 times, and the band-pass filter was set to 0.5 ~ 50Hz. The sampling rate of 200 Hz was used for the measured signals.

The digital filter, analog circuit and overall block diagram of the measurement system are shown in Fig. 1. 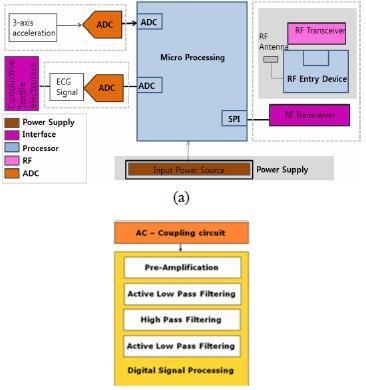 The configuration and appearance of the garment device are shown in Fig. 2. Modified bipolar electrodes, based on the calculated potential difference from the conductive fiber electrodes, were arrayed in the chest part. 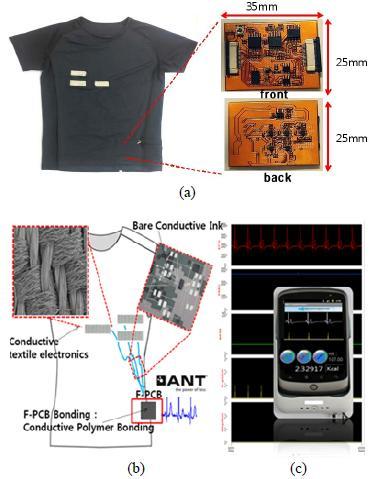 Fig. 2.Block diagram of the health care system of smart clothes that have been proposed: (a) Smart appearance of the actual garment: Exterior of wearable sensor shirt; (b) Configuration of Smart shirt, and (c) monitoring via Android-based x86- based system

An Ac-coupled circuit and data line were used as a conductive string. Final analog output signals were quantized for signal and data processing, through A/D conversion of a microprocessor.

This low-powered processor was used for digital filtering, R-peak detection and the evaluation of arrhythmia.

For long term usage of the device for 24-hour Holter monitoring, a low-powered wireless communication chipset and low-powered protocol of short-range wireless of 1:n (Nordic semiconductor, nRF24AP2) were used, and continuous data collection and analysis were performed.

2.2 The ECG acquisition by clothes

The activity of the heart was measured and compared using standard limb lead measurements, and a bipolar electrode, which was modified from a conductive fiber electrode. The result showed highest correlation at the V3 limb lead position, and the rest of the result through Pearson Correlation is given in Table 1. 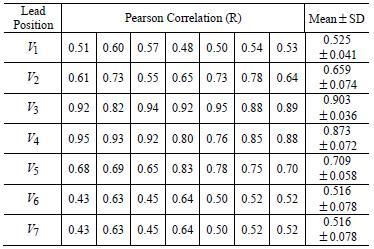 Generally, as the size of electrode decreases, the measurable range of waveforms was lower than that of normal 12 Lead ECG, and the electric activities of the atrium and ventricle could not be measured simultaneously.

However, when it was measured at the chest lead position, a similar range of waveform to the lead2 waveform from the standard limb lead could be measured, and the AICF algorithm was proposed.

An adaptive impulse correlation filter (AICF) was used to remove the nose included in the ECG signal. The AICF was proposed to estimate the deterministic signal, and showed better performance to reflect the critical signals, compared to the previous method, of ensemble averaging [9].

The AICF is similar to the normal adaptive noise reduction filter, but different in terms of the input signal characteristics.

The normal adaptive noise reduction filter uses a typical background signal, which contains a definitive signal for the main input, and the correlated signal, which is synchronized to the main signal, and is used as the reference input

However, AICF is different from the previous method, in using decisive signal activation, and the synchronized impulse as the reference input.

For example, in the case of configuring the filtering circuit to remove the noise in the ECG, the synchronized impulse is used as the reference input, as shown in Fig. 3.

Fig.3.Block diagram of the Adaptive impulse correlated filter. The impulse signal is derived from the samples of the 3-axis accelerometer

The NLMS (Normalized Least Mean Square) algorithm was used to update the AICF coefficient, since the calculation is simple, and less sensitive to the change of power in the input signal.

A notch filter was used to remove the 60Hz power supply noise from the ECG. Fig. 4 is a block diagram of the Notchfilter as the proposed method, while Fig. 5 shows before and after noise filtering. 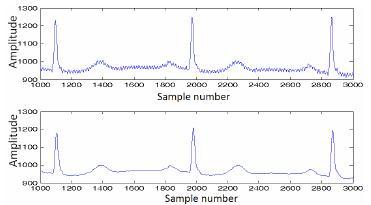 Fig. 5.Before (above) and after (below) noise filtering by the Noch filter

As shown in Fig. 4, in order to reduce the noise contained in the ECG signal, a synchronized impulse signal sampled from the signal magnitude area (SMA) of the accelerometer output is used to estimate noise, and reduce artifacts due to respiration, and other body movements. A normalized least mean squares (NLMS) algorithm was used to update the weight vector of the adaptive filter. Compared to least mean squares (LMS) methods, the NLMS algorithm has less computational requirements, and has the advantage of being less affected by the change in power of the signal.

The minimized baseline change of the signal by AICF is shown in Fig. 6, where (a), (b) and (c) show the ECG raw data, impulse for baseline change, and ECG for which the baseline is minimized, respectively. Since AICF tends to severely distort the ST segment, an algorithm that used the narrowband filter to complement the defect was applied, to detect the R point. 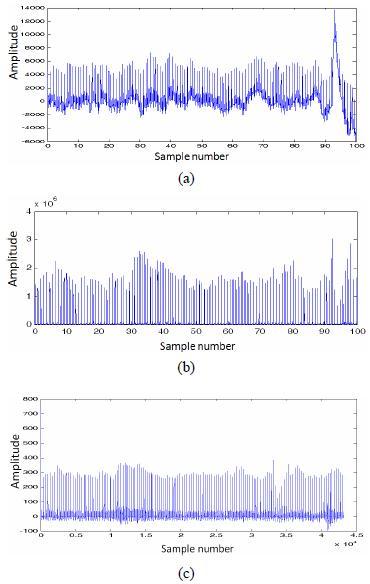 Fig. 6.Baseline removal with AICF: (a) Raw ECG signal, (b) the synchronized impulse signal derived from the accelerometer, and (c) the entire filtered output of the AICF

2.5 Filters of the proposed algorithm to determine the point R

To differentiate the R point, the baseline signal was standardized, and the various noises were removed, by applying a band pass filter of 0.5 Hz – 50 Hz. To detect the accurate R-point, a 20 order narrow band pass filter was processed, and a 50 point smoothing process was applied, based on the threshold after (>0) basis. This process is necessary to precisely evaluate arrhythmia, and the detected R points are given in Fig. 7. 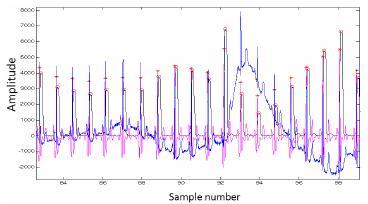 Fig. 7.Detected R points by bandpass filter of 0.5 Hz – 50Hz and smoothing process(raw ECG, the Filtered output of the AICF)

Fig. 8 shows that the baseline variation of ECG signal could be minimized, and that the R point was detected, regardless of the noise influx. The VT rhythm was obtained from the SR signal, as shown in Fig. 9; and the signal over 500 ms was classified as SR signal, and that below was VT rhythm, based on the obtained RR interval. 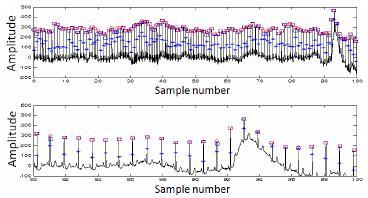 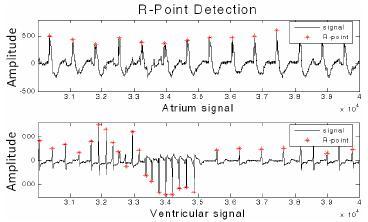 The Mit-bih arrhythmia database was used for the purpose of the study. This data is widely used to validate various algorithms for the ECG signal, and includes 360 samples per second for 30 minutes. To evaluate the performance of R wave detection of the algorithm from the given ECG data, one R wave was detected and set to be the basis, and the error rate was calculated, based on the given formula (1).

Table 2.R-PEAK is found by the Mit-bih arrhythmia database 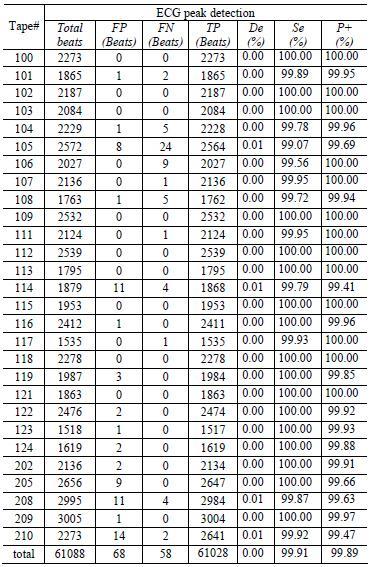 In general, the proposed method showed very good performance in detecting the R peak of ECG. It appears that the accuracy of the algorithm for tape number 205 shwing a number of FP and FN. However, it was proven that the quality of the signal was low, with the validation against the previous other algorithms showing low accuracy. In the case of the signal including ventricular flutter, both the current algorithm and the previous methods detected the signal, but the current one showed a better detection rate. In conclusion, it was shown that the detection rate of the R wave was higher than that of the previous methods, using the current algorithm combined with the narrow band filter.

In this study, ECG measurement was studied, using conductive fabric and conductive string. As a result, the method had the weakness that the signal range is lower, and the electrical activity of the atria and ventricles could not be measured at once, but it showed similar to the standard limb lead at the thoracic (Pearson Correlation (R = 0.95)).

A novel algorithm on the least square acceleration-based ACIF was proposed, to remove the noise, and detect the specific R point of ECG. The performance of the method was evaluated with recordings from the MIT-BIH database, and showed a very good overall accuracy, of 99.89%.

With the current algorithm, a single channel of the ECG signal was able to be processed, and detect the R point. Furthermore, the proposed algorithm showed faster processing than the previous methods, and provided the useful real-time application of arrhythmia detection, due to the simple structure.