The Wnt signaling pathway is well known to play major roles in skeletal development and homeostasis. In certain aspects, fracture repair mimics the process of bone embryonic development. Thus, the importance of Wnt signaling in fracture healing has become more apparent in recent years. Here, we summarize recent research progress in the area, which may be conducive to the development of Wnt-based therapeutic strategies for bone repair.

‘Wnt’ was named after both the Drosophila Wg (wingless) gene (1) and the homolog of mouse mammary oncogene Int-1 (2). Wnts now comprise a family of secreted glycoproteins and play critical roles in embryonic development, carcinogenesis, and other important physical processes, such as bone metabolism. To date, 19 different Wnt proteins have been found in humans and mice, including WNT1-WNT11, and WNT16 (3). It is well known that the Wnt signaling pathway plays several major roles in skeletal development and homeostasis (4, 5). To a certain degree, the process of fracture repair is similar to that of embryonic bone development (6). Thus, in recent years, increasing attention has been placed on the role of Wnt signaling in fracture healing (4,7,8).

As a regenerative tissue, bone is able to repair itself after a fracture. However, ~3-10% of fractures fail to heal properly, with issues such as delayed union and non-union (9). In the United States, it is estimated that 100,000 fractures lead to non-union each year (10). Thus, it is important to find new anabolic agents that enhance bone regeneration and promote bone repair to improve the quality of treatment for fracture patients. In this article, we summarize some of the findings on the role of Wnt signaling pathway in fracture healing.

In the canonical Wnt signal pathway, the Wnt protein binds to the membrane receptor ‘Frizzled’ (Fzd) (11), which is a seven-transmembrane protein. Then, together with other coreceptors, LRP5 and LRP6 (low-density lipoprotein receptor-related protein) (12), the protein activates ‘disheveled’ (Dsh), which inhibits the activation of glycogen synthase kinase-3β (GSK-3β). Inactive GSK-3β is unable to phosphorylate β-catenin, so the unphosphorylated β-catenin escapes degradation by the proteasome complex, then translocates into the nucleus and associates with transcription factors ‘T cell factor 7’ (Tcf7) and ‘lymphoid enhancing factor 1’ (Lef1) to regulate the expression of relevant genes (13). In the β-catenin-independent non-canonical Wnt signal pathway, calcium signaling is thought to be the central mediator (14-16). The interaction of Wnts and Fzd leads to the formation of a tri-protein complex of Dsh-Axin-GSK, which mediates the phosphorylation of co-receptor tyrosine-protein kinase transmembrane receptor 1/2 (Ror1/2). The binding of Wnts to Fzd and Ror1/2 activates membrane-bound phospholipase C (PLC) and causes an increase in the concentration of inositol triphosphate (IP3), 1,2 diacylglycerol (DAG), and intracellular calcium. This leads to alterations in downstream cellular function (17). Additionally, some secreted proteins, such as Dkk (dickkopf), Sost (sclerostin), and Sfrp (secreted frizzled-related proteins), may interact with LRP5/6 or Fzd receptor, and act as antagonists, inhibiting the Wnt signaling pathway (18-20).

Fracture healing is a complex biological process that involves different types of bone cells and the interactions between cells, growth factors, and extracellular matrix. The repair consists of four overlapping stages: inflammatory response (also known as hematoma formation), soft callus formation, hard callus formation, and bone remodeling (21). During the process, bone cells are sequentially activated to form new bone. After hematoma formation, mesenchymal stem cells are recruited and proliferate and differentiate into osteogenic cells: chondrocytes and osteoblasts. The chondrocytes form a soft callus, which gives the fracture a stable structure. Later, the soft callus is mineralized and replaced with bone through endochondral ossification. At the same time, osteoblasts mineralize, generating a hard callous through intramembranous ossification. Finally, osteoclasts and osteoblasts are responsible for the bone remodeling process, which establishes new bone tissues (21-24).

During the repair process, the expression of many Wnt ligands (WNT4, 5b, 10b, 11, and 13) and receptors Fz1, 2, 4, and 5 are upregulated during fracture healing (25). Also, some target proteins of the Wnt pathway, such as c-myc and connexin 43, are activated (26, 27). These results have shown the role of Wnt signaling in regulating bone formation during the repair process.

Several studies have shown the activation of β-catenin signaling at fracture sites (28-31). Chen et al. have shown that β-catenin protein is highly expressed during the entire period of fracture repair (25). They used loss-of-function and gain-offunction approaches and found that in the early stage of healing, β-catenin controls the differentiation of mesenchymal cells, into osteoblasts and chondrocytes. Either an increase or a decrease of β-catenin interferes with the early stage of bone healing. In the later stages, when cells are committed to be osteoblasts, β-catenin promotes the differentiation of osteoblasts into bone and stimulates fracture healing (25).

The function of GSK-3β during fracture healing has been investigated using inhibitors of GSK-3β. Oral treatment with lithium chloride (LiCl), a known inhibitor of GSK-3β (35), can activate Wnt signaling and accelerate fracture repair. However, this effect only occurred in the later phases of repair when mesenchymal cells have committed to become osteoblasts. Early lithium treatment, before the fracture, causes the aggregation of undifferentiated mesenchymal cells and reduces bone at fracture sites (25). LiCl attenuates the damaging effects of alcohol exposure on healing by restoring cartilaginous callous formation and endochondral ossification at fracture sites (36). For human cases, LiCl treatment is associated with a decreased risk of fractures (37). The oral administration of AZD2858, a bioactive GSK3 inhibitor, heals fractures rapidly and increases the strength of healed bone versus vehicle-treated controls (38).

Sfrp1 interacts directly with Fzd or Wnts to antagonize canonical Wnt signaling (39). The expression of sfrp increases in Wnt-dependent early bone formation, along with the enhancement of β-catenin expression. Sfrp1-deficient mice have increased BMD, bone volume, and mineral apposition in the trabecular region, but not in the cortical region (40). Microarray expression analysis shows a significant decrease in the expression of sfrps 4 days after fracture. However, sfrp1 and sfrp4 are upregulated at both day 8 and day 14 after fracture, indicating negative regulation of bone formation during the osteogenic phase of repair at the injury site (29). The loss of sfrp1 function in vivo improves fracture repair by directly shifting progenitor cells into osteoblast lineage to promote early bone union. The sfrp1-/- mice showed a dramatic reduction in the cartilage callous, and increased intramembranous bone formation at day 14 after fracture. These mice also exhibited earlier bone remodeling during the 28 day fracture repair process than wild-type mice (41).

Sost is a secreted glycoprotein expressed primarily by osteocytes in bone tissue. Sost binds to the extracellular domain of LRP5 and LRP6 and disrupts the formation of Wnt-LRP complex (42). Sost knockout mice have increased BMD, bone volume, bone formation, and bone strength (43, 44). Also, these mice have more bone in the fracture healing defect, which is due to an enhancement of the thickness of trabecularized spicules and osteoblast numbers (44, 45). Kambiz Sarahrudi et al. showed the first evidence demonstrating that Sost increases significantly during human fracture repair (46). Several in vivo studies have shown that systemic administration of Sost antibodies increased bone formation significantly at the site of fractures in several animal models, including mice, rats, and cynomolgus monkeys (44, 47-53). Antibody treatment improved bone density and the strength of non-fractured bones (47, 52). Anti-Sost therapy represents a promising approach for osteoporosis and fracture healing.

INTERACTION BETWEEN WNTS AND OTHER BONE REGULATORY MOLECULES DURING FRACTURE HEALING

There are also other molecules that play roles in fracture healing process also via interactions with Wnt signaling.

As a clinically approved anabolic drug used to treat osteoporosis, parathyroid hormone (PTH) is thought to also be effective for fracture repair (59), which is at least partially Wnt dependent (60). PTH enhances the expression of several Wnts and nuclear localized βcatenin protein (30). It also induces Lrp5/6 expression in the fracture callus, and promotes levels of Dkk1 and Sost during fracture healing.

Another growth factor used to accelerate bone healing is bone morphogenetic protein (BMP) (61-64), which can also cooperate with the Wnt signaling to promote osteoblast differentiation and new bone formation (65, 66). Wnt signaling is involved in chondrogenesis process induced by BMP-2. LiCl treatment decreased the upregulation of LEF-1 and βcatenin induced by BMP-2 during later chondrogenesis (67). BMP-induced bone formation could be inhibited by Sost, both in vitro and in vivo (68, 69). Yan Yiu Yu et al. have shown that in BMP-treated calluses, the Wnt pathway is activated (70).

In this review, we summarize the current state of knowledge on Wnt signaling during the fracture repair process, which involves a well-organized interaction of various bone cells and activated regulatory factors (Table 1). Generally, activation of Wnt signaling is helpful to accelerate bone repair, and mutations in β-catenin or LRP5/6 reduce bone healing. Moreover, inhibition of negative regulators in the Wnt signaling pathway, such as GSK-3β and Sost, can improve bone formation at fracture sites. Thus, inhibitors of GSK-3β and Sost neutralizing antibodies may be promising and feasible targets for bone repair. Unfortunately, efforts to develop Sost antibodies for fracture healing have been abandoned by Amgen and their partner UCB, mainly due to the high investment requirement and the smaller market for fracture healing than osteoporosis. Thus, more hope should be placed on inhibitors of GSK-3β for developing drugs to promote bone repair. Nonetheless, there is a long way to go. More work remains to be done in clinical and basic research to optimize treatment strategies. For example, the disparate roles of Wnts in different phases of fractures should be considered in the future development of therapeutic strategies.

Table 1.Summary of the published in vivo studies of the role of Wnt signaling in fracture healing 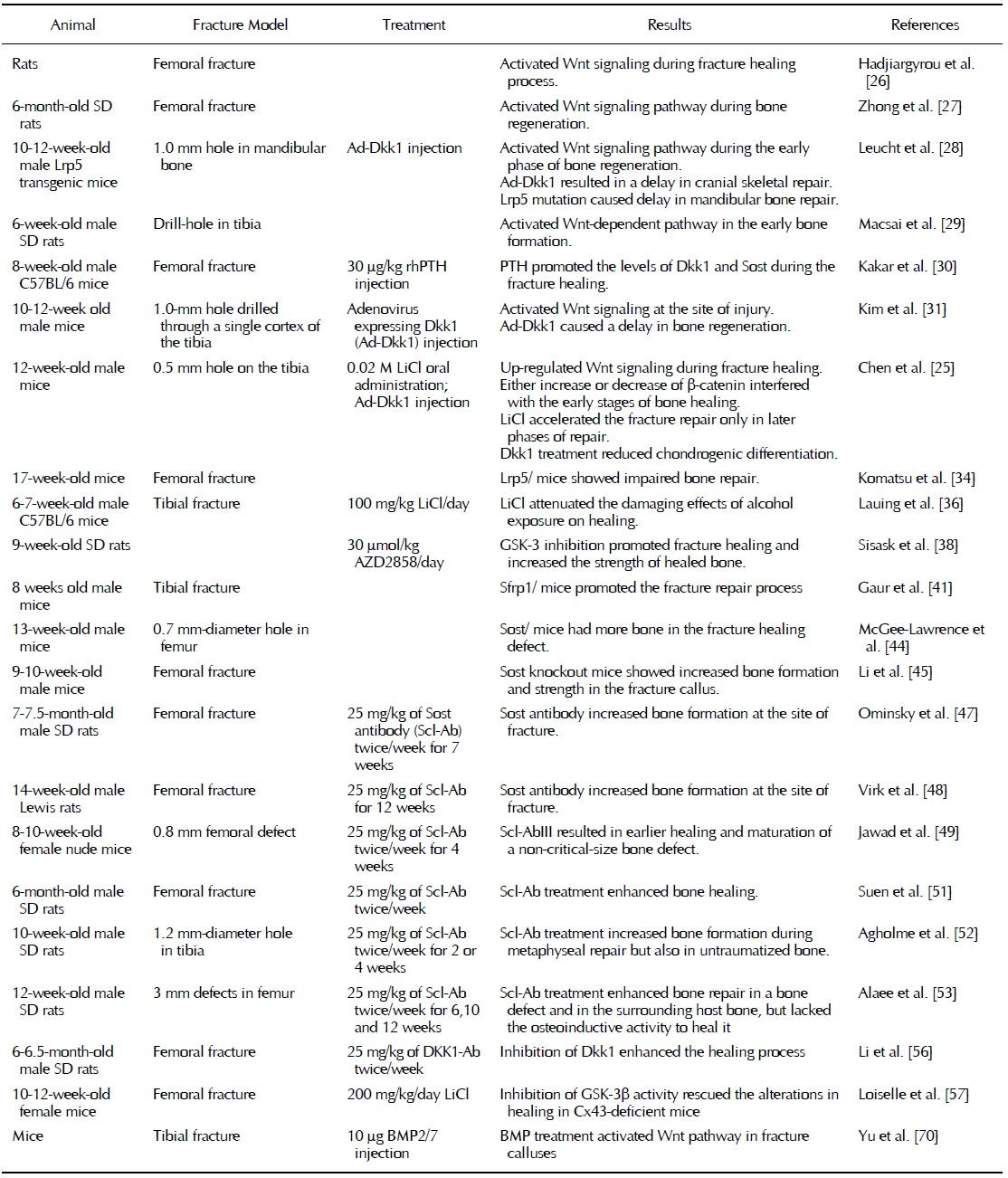