Pyrrosia lingua has been widely used as a traditional medicine for the treatment of lots of diseases including pain management. However pharmacological and phytochemical studies on its anti-nociceptive properties are extremely limited. In this work, we investigated the effects of methanol extract of Pyrrosia lingua (MPL, 250 and 500 mg/kg) on the both of central and peripheral nociceptive pain. The results from tail-immersion test and hotplate test revealed that MPL has potent anti-nociceptive effects on thermal nociception. In addition, MPL efficiently reduced the acetic acid-induced chemical nociception compared to indomethacin. We also carried out formalin test and MPL reduced formalin-induced pain response on both phases, suggesting MPL has antinociceptive activities on the central and peripheral pain. In combination test using naloxone, anti-nocicpetive activity of MPL was reduced, indicating that MPL acts as a partial opioid receptor agonist. These results suggest that MPL may be possibly used as a valuable natural product-derived painkiller.

Pain is defined as an unpleasant sensory and emotional experience associated with actual or potential tissue damage, or described in terms of such damage.1 Although, hundreds of anti-nociceptive drugs including non-steroidal anti-inflammatory drugs (NSAIDs) or opioid drugs have been available for treating pain, it has been reported that NSAIDs have several side effects such as gastrointestinal disorder and opioid drugs also have addiction problem. Thus, there is still a need for effective painkillers. Accordingly, novel drugs originated from natural products has been receiving a lot of attention. Indeed, many plantderived compounds present effective anti-nociceptive activities.2

Pyrrosia lingua belonging to Polypodiaceae has been widely used as a traditional medicine with beneficial effects in pain, urinary stone formation and vaginal bleeding in Korea and China. Previous phytochemical studies on this plant have been demonstrated that it has chlorogenic acid, xanthonoids, and flavonoids.3,4 However, pharmacological studies on this plant are needed to be evaluated.

In this regard, here in this work we investigated the anti-nociceptive effects of methanol extract of P. lingua (MPL) by using various experimental pain models including thermal nociception and chemical nociception in mice. We also performed combination test using naloxone to verify whether MPL exerts anti-nociceptive properties possibly via acting as an opioid receptor agonist.

Sample preparation – The whole part of plant were purchased from Hainyakupsa (Jeonbuk, South Korea) in October 2013. A voucher specimen (WH087) has been deposited at the Department of Oriental Pharmacy, College of Pharmacy, Woosuk University. An extract was obtained twice from the dried sample (600 g) with 6,000 mL of MeOH under sonification for 2 h. The resultant methanolic extract was concentrated into 22.5 g (Yield : 3.75%) using a rotary evaporator.

Experimental animals – ICR mice (6 weeks old, males and females) weighing 20 - 25 g were supplied by Damul Science (Dajeon, Korea). All animals were housed at 22 ± 1 ℃ with a 12 h light/dark cycle and fed a standard pellet diet with tap water ad libitum. The experimental protocols complied with the recommendations of International Association for the study of pain.5

Grouping and drug administration – Animals were randomly assigned into each group, consisting of 8 or 10 mice for anti-nociceptive tests. Negative controls were treated with equal volume of distilled water (D.W). Positive controls were treated with standard drugs such as tramadol (i.p.) or indomethacin (p.o.). Treatment groups were orally administered either 250 mg/kg or 500 mg/kg of MPL.

Acute toxicity test – In order to evaluate possible toxicity, the acute toxicity test was carried out. Mice (n = 6) were tested by administering different doses of MPL by increasing or decreasing the dose, according to the response of animal,6 while the control group received only the equal volume of distilled water. All groups were observed for any gross effect or mortality during 24 h.

Tail immersion test – In the present study, the tail immersion test was conducted according to Wang et al. with minor modification.7 Briefly, the lower two-thirds of mice tails were immersed on a water bath set at temperature of 50 ± 0.2 ℃. The reaction time, necessary for the mice to withdraw the tail, was measured every 30 min after administration of MPL (250, 500 mg/kg; p.o.) or tramadol (15 mg/kg; i.p.). To avoid tissue injury, cutoff time was chosen as 20 s.

Hotplate test – The hot-plate test was carried out using a hot-plate apparatus, maintained at 50 ± 1 ℃.8 We selected the mice that showed initial nociceptive responses (licking of the forepaws or jumping) between 7 and 14 s for the further experiment. The mice were pre-treated with the MPL (250, 500 mg/kg; p.o.) or vehicle (D.W). After 30 min, the reaction time in response to thermal nociception was calculated. The cut-off time was set at 30 s in order to minimize skin damages. Tramadol (15 mg/kg; i.p.)-treated group was used as positive control.

Acetic acid-induced writhing test – We carried out acetic acid test as previously described.9 An intraperitoneal injection of acetic acid solution (0.8% in saline) to animals causes abdominal constrictions and hind limbs stretching. After 10 min, we measured the number of this motions following 10 min period. Each experimental group was treated orally with vehicle (D.W), MPL (250, 500 mg/kg) or indomethacin (5 mg/kg), 1 h prior to acetic acid injection.

Formalin test – The formalin test was carried out as described previously.10 Prior to formalin injection, mice were treated with vehicle (D.W), MPL (250, 500 mg/kg). After 30 min, each mouse was given 20 µl of 1.5% formalin (in 0.9% saline, subplantar) into the right hindpaw. The duration of paw licking (s) as an index of painful response was determined at 0 - 5 min (first phase, neurogenic) and 25 - 40 min (second phase, inflammatory) after formalin injection. Tamadol and indomethacin were used as a positive control drug. In order to examine the possible connection of endogenous opioids, naloxone (5 mg/kg; i.p.) was pre-treated 15 min prior to drug administration.

Statistical analysis – All data were expressed as the mean ± S.E.M. To validate the statistical significance, data was subjected to Student's unpaired 2-tailed t-test. P-values less than 0.05 are considered as statistically significance.

In the present study, we investigated the anti-nociceptive effects of MPL using various pain models including thermal nociception as well as chemical nociception in mice. First, to check the possible toxicity of MPL on animals, acute toxicity test was conducted. Various concentrations of MPL (up to 2000 mg/kg) were administered to animals and the treated mice did not present any behavioral alteration, convulsion and death for 24 h (Data not shown)

Next, we examined the effects of MPL on the central nociception using thermal nociception models such as tail immersion and hotplate tests. Herein, MPL showed potent anti-nociceptive capacities in both of tail immersion test and hotplate test. This results suggest that both spinal and supraspinal analgesic pathways are involved in MPL-mediated anti-nociceptive actions. In both tests, tramadol exhibited rapid effect with a maximum peak in the short time which is similar to the action of opioid agonists (e.g. morphine), whereas MPL reached highest analgesia level at 60 min after administration (Fig. 1, 2). This difference in the maximum analgesic point could be explained by the methods of drug administration (i.p. or p.o.) or metabolic rate of each drug. 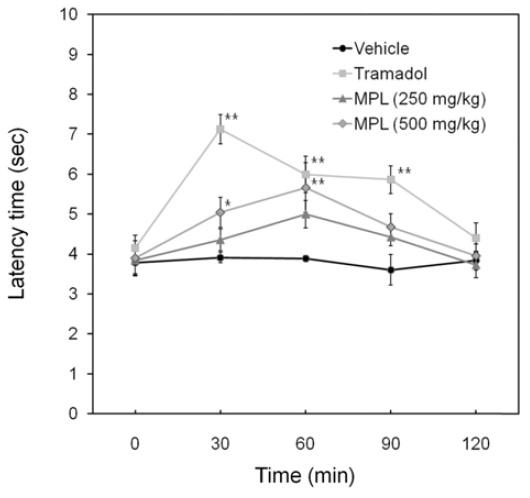 Then, we examined whether MPL can reduce peripheral nociception using chemical nociception model such as acetic acid-induced writhing model. This model has been frequently used to estimate both central and peripheral analgesic effects of drugs.11 We found that the acetic acidinduced abdominal constrictions were significantly downregulated by MPL treatment in a dose dependent manner (Fig. 3). This chemical nociception has been known to be associated with increased level of prostaglandins E2 (PGE2) in the peritoneal fluids.12 Previous studies suggest that PGsinduces abdominal constrictions via activating and sensitizing of the peripheral chemosensitive nociceptors13 which is largely associated to the development of inflammatory pain.14 Therefore, one of the possible analgesic mechanism of MPL may be connected to inhibition of cyclooxygenase (COX) enzyme which catalyze the PGs synthesis. Indeed, P. lingua contain many constituents including chlorogenic acid and astragalin which has been known to possess anti-inflammatory properties.15,16 In the present study, indomethacin, the NSAIDs, produced peripheral analgesic potential followed by significant decrease in writhing response. 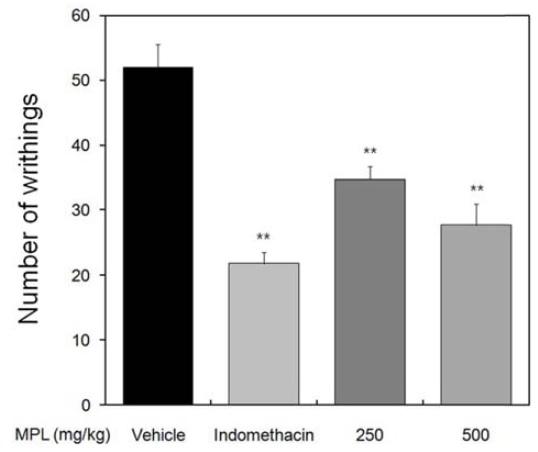 To confirm the MPL’s anti-nociception on central and peripheral pathway, formalin test was conducted. The subcutaneous injection of formalin causes biphasic nociceptive responses involving two different mechanisms.17 The first phase (neurogenic pain) caused by the direct chemical stimulation of nociceptive afferent fibers, predominantly C fibers, which can be suppressed by opiates like morphine.18 On the other hand, the second phase (inflammatory pain) results from the action of inflammatory mediators such as prostaglandins, serotonin, histamine and bradykinin in the peripheral tissues17, and of functional changes in the spinal dorsal horn.19 The results of the present study revealed that tramadol is effective in preventing both the early and late phases of formalininduced nociception, while indomethacin suppressed mainly in the later phase. These results are quite reasonable, since many reports suggest that the drugs which primarily act on the central nervous system inhibited equally in both phases, while peripherally acting drugs, such as steroids and NSAIDs are mostly can cause slight inhibition against the early phase of the formalin test.20-22 In this test, MPL reduced the duration of the paw licking time obviously in both of first and second phase, representing its suppressive properties on neurogenic as well as the inflammatory nociception (Table 1). These data provided a further confirmation on the central effect of MPL which showed in the tail-immersion and hotplate tests. Furthermore, in agreement with the results from the acetic acid test, MPL (500 mg/kg) also displayed better peripheral analgesic performance compared with indomethacin.

In a combination test using naloxone, a non-selective opioid receptor antagonist, anti-nociceptive action of tramadol was reduced but still remained under the influence of naloxone. These results correlate with the previous studies that tramadol is a partial opioid agonist having both opioid and non-opioid properties.23 However, naloxone did not affect the antinociception of indomethacin on second phase. Interestingly, MPL-induced anti-nociceptive effect was slightly declined in the presence of naloxone. This result showed that anti-nociceptive activity of MPL was partially related to opioid receptor.

Previous phytochemical researches have been revealed that P. lingua contains xanthonoids, including mangiferin, isomangiferin.4 Many studies have shown that mangiferin has potent analgesic activities and its anti-nociception is associated with peripheral opioidergic system.24,25 Therefore, we assume that this compound is possibly interconnected with the anti-nociceptive capacity of MPL.

Although P. lingua has been used for the treatment of pain as a traditional medicine in Eastern Asia, there was no reported scientific evidence until now. Here in our study, we showed that MPL has anti-nociceptive potential involving central and peripheral mechanisms as a partial opioid agonist. Based on these results, MPL may hold great promise for use in many diseases as an effective painkiller.