Heavy load start but light load operation is a common case in practical drive applications. When an induction motor is employed for such applications, its rated power is usually chosen according to the heavy load start. Then, during light load operation, its efficiency and power factor are low. To solve this problem, it is proposed to adjust the motor windings from the startup to the normal operation conditions. In this paper, arrangement of the adjustable windings is introduced, air gap field with different windings is investigated, and steady state operation performance under various loads is examined. It can be seen that by using proper winding arrangement both startup and operation performances are satisfactory.

In practical drive applications, where induction motors are widely used, it is quite common that the motors start with heavy load but operate with light load [1-2]. To meet the performance requirements of heavy load startup, high power motors should be chosen. However when the motors work at steady state, the load decreases, which causes low efficiency and low power factor, not only wasting energy but also increasing the operating costs [3].

It is always necessary to reduce the motor energy losses. Various techniques have been developed and applied. For example, the high-slip induction motor can have the startup performance improved by specially designing the rotor slots and using the skin effect [4]. Thus the rated power dose not have to be over chosen, hence, the steady-state performance can be enhanced [5]. However, energy-saving of the high-slip motors is effective only when the load is less than 30% of the rated load. In addition, some applications do not allow running with high slip. Thus, application of the high-slip motor is restricted. The permanent magnet motor has higher efficiency and power factor with a wide range of load, which is better than the induction motor in the aspect of energy-saving [6]. However, the starting torque of the permanent magnet (PM) motor is usually less than that of the induction motor. Besides, temperature rise is a crucial issue for the PM machines, since high temperature may cause demagnetization of the magnets and other reliability problems. Furthermore, the price of rare-earth permanent magnet material keeps increasing. On the other hand, the inverter fed induction motor drive system can meet the requirements of starting performance and improve the efficiency with light load [7- 8]. However, there are also problems such as high system costs, complex control system, and poor reliability in harsh environment. Dual-winding induction motor is another option. There are two windings in the stator [9]. It starts with high-power winding to meet the starting torque requirements, and achieves energy-saving with a small power winding in light load operation. However, this kind of motor has a low power density, and high manufacturing costs.

In this paper, an induction motor with adjustable windings is proposed. It can meet the requirements of both light load operation and heavy load starting. Only one set of windings are fixed in the stator. By connecting different winding terminals to the mains power supply, the motor can start and run with different number of coils and excitation current, thereby, improving the power factor and efficiency. It should be noticed that the squirrel-cage rotor needs no change. The method of employing adjustable windings exhibits lower cost than other methodologies, such as field weakening operations.

In this paper, the winding design method and energysaving mechanism of the motor are introduced, and, the air gap field distribution and harmonic components with different winding connections are calculated and compared. Besides, the steady-state operation is studied when the motor runs under different load rate, and the motor dynamic characteristics during heavy load starting and winding switching is also investigated.

Fig. 1 shows a T-type equivalent circuit of the threephase induction motor. As is known, when the induction motor works at full load, the excitation current and load current should be in a proper ratio, and the variable loss and constant loss are similar, so that the motor has high efficiency and power factor. 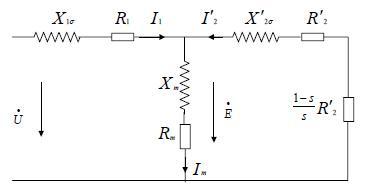 However, when the motor load rate is low, and the voltage is constant, the excitation current and the iron loss will be almost constant regardless of the load. The active current and winding copper loss, however, greatly decline with the decrease of load rate. Therefore, both the power factor and efficiency will drop. That is the reason why an over-rating induction motor has a poor performance, when it works with heavy load startup and light load operation.

In order to improve the power factor and efficiency of the light-load induction motor, it is essential to weaken the magnetic field during light load operation, thereby reducing the exciting current of the motor windings. The induced voltage E in each phase of winding can be obtained from (1), where f represents the frequency, and N denotes the number of series connection turns in each phase, Kw is the fundamental winding factor, and ϕm is the air gap flux per pole. E is similar to the voltage supply, which is almost a constant. Therefore, ϕm can be reduced for light load operation by increasing N, or be increased for heavy load startup by properly reducing N. In actual operation, it is desirable to adjust N dynamically according to the load rate. 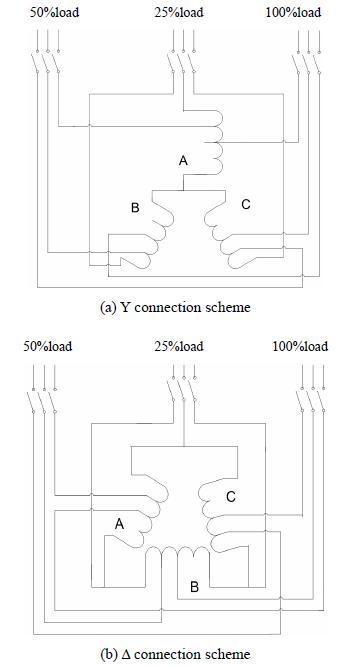 When adjusting the windings, harmonics of the air gap field should be investigated, and operating performance should be examined. These will be carried out hereafter, with finite element analysis.

The designed prototype induction motor uses the same stator core and squirrel cage rotor as the standard Y250M-6 induction motor, with the stator windings modified only. The motor’s rated power is 37kW, the number of poles is 6, the stator has 72 slots, and the number of slots per pole per phase is q=4. The stator windings are of double-layer and short-pitch with Δ connection, and the coil pitch is 10 slots. The first coil of phase-A winding under the first pole is denoted as coil-1, and the other coils are denoted similarly(see Fig. 3). The prototype motor works at the rated load, 50% load and 25% load, respectively. There are two schemes of winding adjusting as given in Table 1, with phase-A windings under one pole-pair as an example. A negative number indicates that the coil is oppositely connected. More information about the Y250M-6 induction motor is given in the appendix.

Table 1.Connection scheme of Phase-A winding under a pole pair 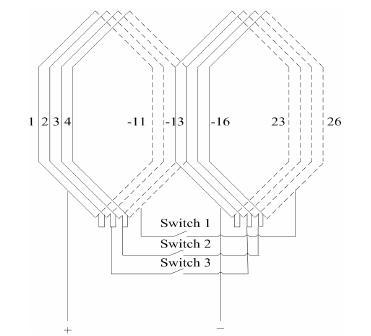 Fig. 3.Winding connection for Phase A under a pair of poles

For the three loads (i.e., the rated load which is the same as the startup condition, 50% load and 25% load), the q value varies as 2, 3 and 4, respectively. By way of example, for the Scheme-1, when q=2, two coils per pole per phase are discarded. And when q=3, one coil per pole per phase is not energized. Therefore, with different values of q, the armature magnetic motive force has different spatial harmonics. The startup performance is similar to that of the original commercial motor, since the number of turns in series per phase is unchanged, but the wires are thinner.

Fig. 4.The following Magnetic field results with q=2 in Scheme-1

Fig. 4 shows the motor field contour, air gap field distribution and harmonics, respectively, when the motor operates under the condition of q=2 in Scheme-1. From Fig. 4, the following conclusion can be drawn: 1) Even in the case of using only a part of coils, the high order harmonics of the motor field still remain low. 2) The peak value of the fundamental air gap flux density is about 0.67T, roughly equal to the standard Y250-6 motor. Therefore, the designed adjustable windings induction motor meets the basic requirements for starting directly with the rated load. Of course the efficiency of the designed motor during the startup is slightly lower than that of the original commercial motor, this is actually not a crucial issue, since the starting period is usually very short. In other words, the torque and current during startup are more concerned than the efficiency. 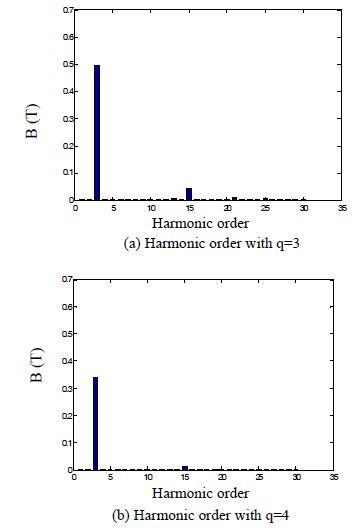 Fig. 5 gives the results of field analysis when the motor works at long-term steady-state with the 50% load and the 25% load, respectively. As can be seen, along with the increasing q value (i.e. more coils being utilized), the air gap field decreased significantly, from 0.67T to 0.5T and to 0.35T, respectively. The excitation current is reduced correspondingly, making the motor able to maintain a high power factor under low load. Besides, with the increased q value, the air gap field harmonics also decrease accordingly.

The air gap field is adjusted with different q values. Then the motor operating performance is examined with a CAD tool when the designed motor starts or operates under the full load, 50% load and 25% load, respectively. The calculation results are shown in Table 2 and Table 3 while the standard Y250M-6 is also compared.

The proposed induction motor starts under heavy load with a small q value of the windings, and then has more coils (i.e. a larger q value of windings) being connected with switches for light load operation. The winding adjusting will affect the motor impedance parameter, thereby affect the dynamic characteristics. Thus, it is necessary to examine the dynamic behavior of this kind of motor. At the end of motor startup, according to the actual load rate, the switching system will change the motor windings to different power modes, as shown in Fig. 2. It means that based on the output of the stator armature current transducers, a microprocessor determines which low-power state the motor should work in, and then sends out the control commands to switch the winding connections accordingly and to lead the motor to the operation state from startup [10]. For the simulation of this dynamic procedure, a Matlab simulation model is created, so as to carry out the analysis the prototype of Scheme-2. 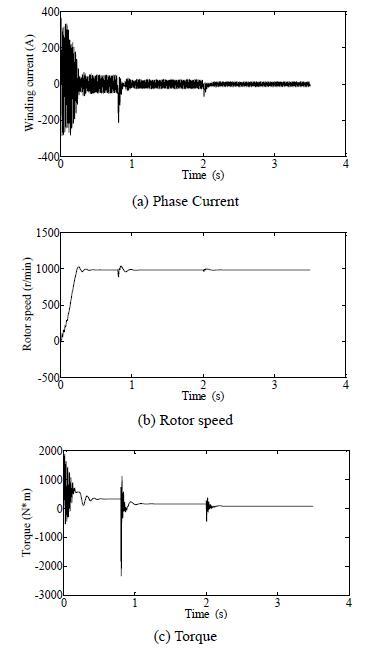 Fig. 6 shows the results of dynamic simulation. At T=0, the motor starts with the full load (353Nm), and 2 coils per phase per pole are used, i.e., q=2. After a short period of fluctuation, the motor approaches the steady state operation. At this time, the stator peak current per phase is about 50A, and the rotor speed is about 985r/min. After adjusting the windings from q=2 to q=3, the load torque is reduced to 165Nm, stator peak current per phase decreases to 30A. Fluctuation exists again, and the motor speed is finally stabilized. At T=2s, the load torque is declined to 85 Nm, and the windings are switched from q=3 to q=4. The speed comes back to the steady state after some oscillation. During the winding adjusting, the ripple of electromagnetic torque is acceptably small. Overall, the designed adjustable windings induction motor system can well satisfy the dynamic performance requirements for the heavy load startup and light load operation.

To verify the validity of the theory and simulation, experiments are implemented using the prototype motor shown in Fig. 7; and wiring inside the control cabinet is shown in Fig. 8.

Experiments results are shown in Table 4, which agree with the simulation. The induction motor with adjustable windings has higher efficiency and power factor than the standard motor under light load conditions. 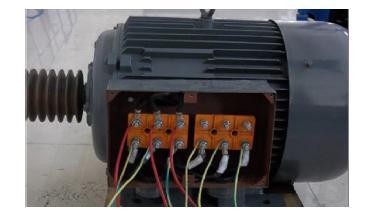 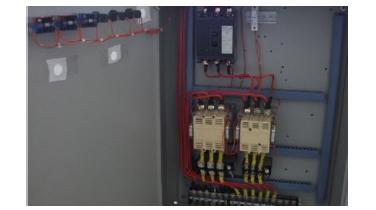 For some applications, the induction motor has to start up with heavy load torque and operate under light load. This paper presents an induction motor system with adjustable windings. During startup fewer coils are energized, while during operation more coils are used, and the winding adjusting is realized with switches. The simulation results show that this kind of motor has good startup performance and dynamic characteristic. When the load is reduced, the motor flux density is lowered by switching the winding, so that the motor power factor and efficiency are improved, which solves the problem of the poor performance caused by the long-term operation under a light load condition. It not only improves the motor efficiency and power factor, but also reduces the running cost.